Hi, my name is Alan and I'm a new member of the club, living in mid-Dorset.

The Bantam - RAU97 - is my mother's and she bought it "nearly new" in 1954.  It seems a little unusual for a rigid frame bike in that it has the plunger model's front mudguard and exhaust pipe above the footrest.  I'd be interested to know how many other rigid D1's have this spec as I've not found any pictures of one - aside from my parent's photos of course! 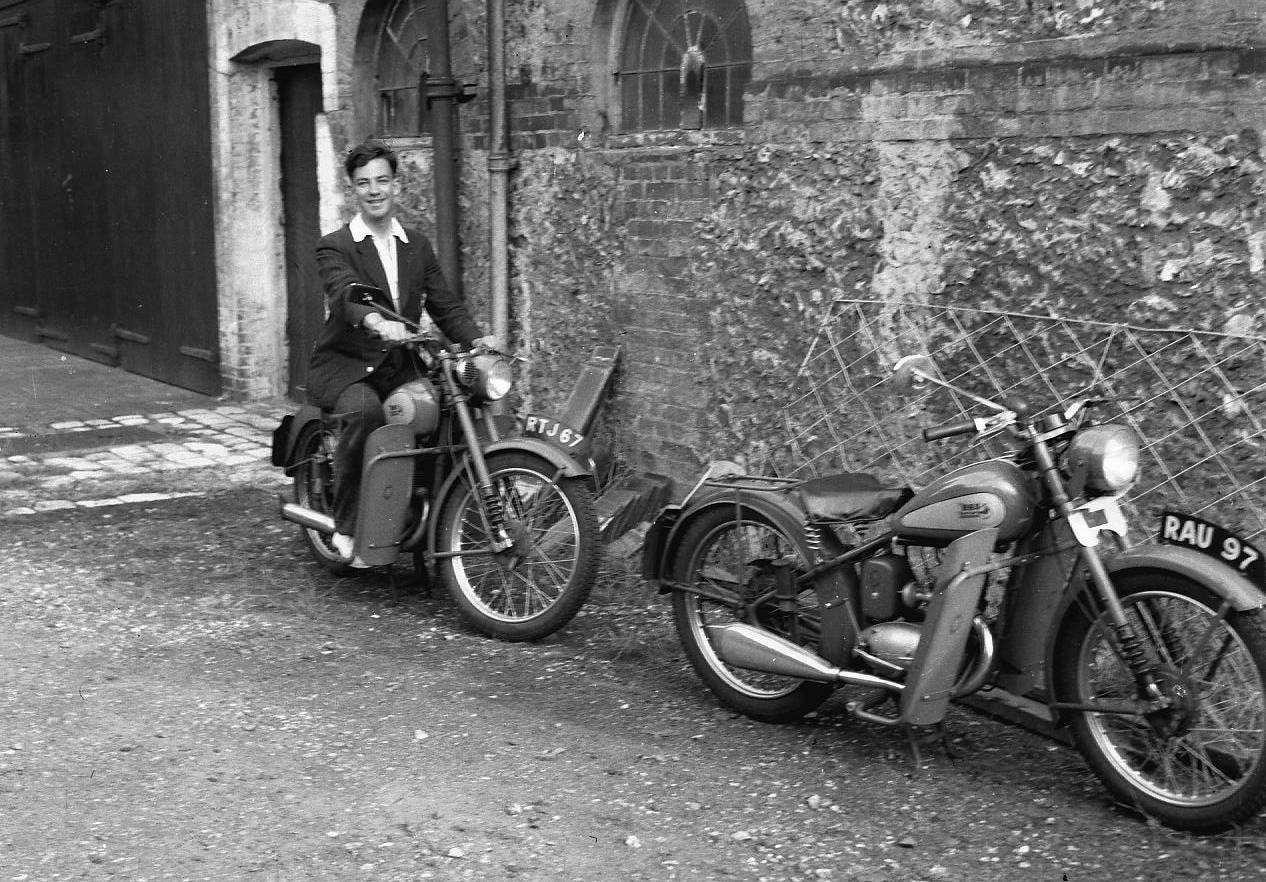 My parents had a Bantam each while at university in the mid 1950's.  My father's was a plunger D1 but he traded it in for a C11G.  Mum kept hers and it was used very infrequently over the years.   The fishtail silencer was replaced by the cylindrical version fairly early on.   Later, an unsprung dual seat and pillion footrests were added.  At some point, Dad painted it  (all over, except the toolbox) in British racing green.

I learnt to ride it around "the back field" when I was 14 - a bumpy ride on the unsprung seat! - and then passed my test on it in 1977.   Later that year I made my first attempt at restoring a bike.   I re-sprayed it in a version of Mist Green that was based on the original paint inside of the toolbox.   I recall it was an early  Ford car (Prefect?) colour but Mum said it "wasn't quite right".  That bugged me for years but now, having seen some of the on-line forum debates  on colour, tank patches and pin-striping, I'm a lot less worried.

The bike has been unused since 1987 but it has a V5C and is now officially declared SORN.

RAU97 is looking decidedly tatty so a full restoration is planned.  First though, I need to rebuild the engine and make sure it runs well enough to justify the rest of the effort to come.

Having dismantled the engine and found the inevitably wobbly clutch (scuffing the inside of the clutch casing) and removed all the bearings and oil seals, I'm preparing my first shopping list.   I'm surprised by the range of prices for bearings and seals. Maybe this reflects a wide range of qualities?  I shall be scouring the forum for advice on best places to buy and poor quality traps to avoid.  All guidance will be most welcome.

Photos to follow when I've work out how to compress them better.

Hello Alan and welcome. Lucky man to have a D1 in the family for so long - don't restore too much of it's history...

You will find loads to cover most questions you will have - have a look in the Tech Archive (FAQs) for a start, there is an index in there which will take you deep into the bikes. Lots of info on bearings and seals (and just about everything else!). We also love to see photos of all stages of your work, though you need to post lower definition ones (the forum does not have limitless space like 'social media' ones do).

Looking forward to your progress. 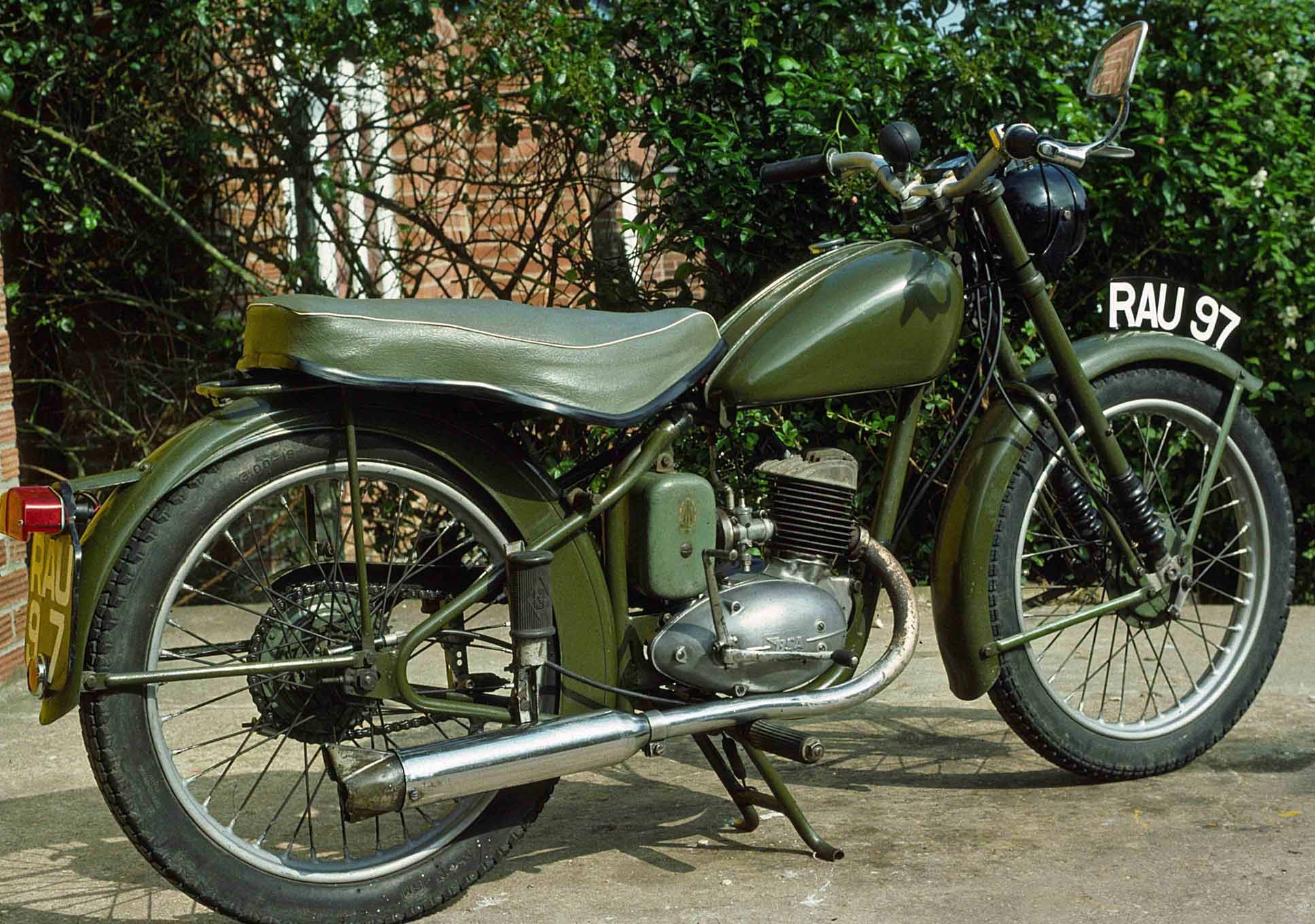 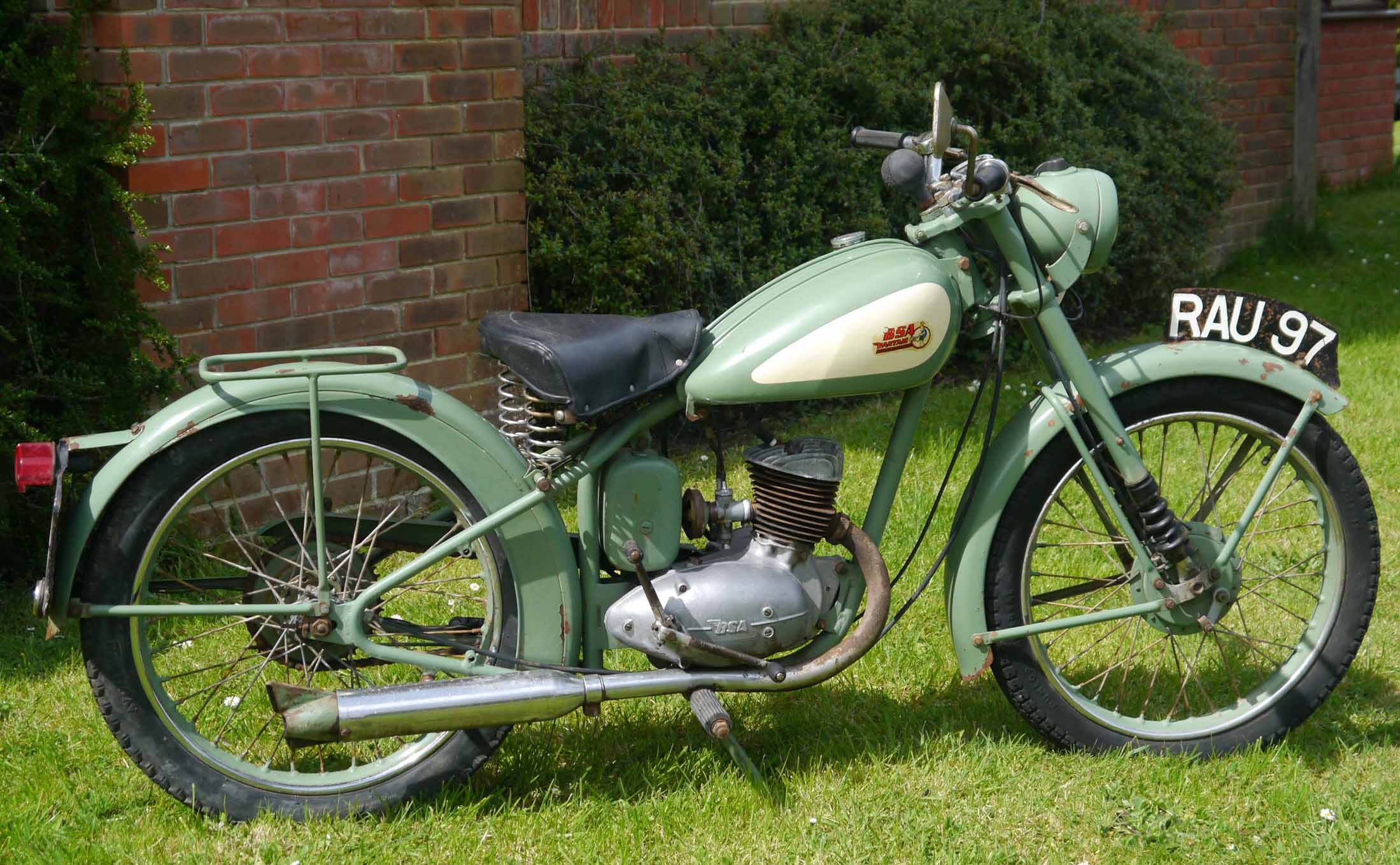 Hi Alan,  Thank you for posting the brilliant photos, especially the black & white one.

Good look with the restoration.

My 1953 rigid D1 has the same mudguard and exhaust pipe layout. It changed for the 1953 model year if I remember correctly, so yours is right for the year.

Cracking black and white photo's, it looks like its come straight out of the Bantam Banter magazine. My mates D1 rigid, is a later one with your type of front mudguard. It also has the bigger cylinder barrel and head.

Good luck with your restorations.

Thanks for the compliments on the photos. My parents were at university in Nottingham and made several long trips by Bantam  - holidays to the Welsh coast (Towyn) and field trips to Sussex.   Luggage was carried in small suitcases roped to the rear carrier!  Progress must have been painfully slow.  Mum was the photographer and took more of Dad on his Bantam so the best of the remaining pics are of the plunger D1.  If only they were all in colour! 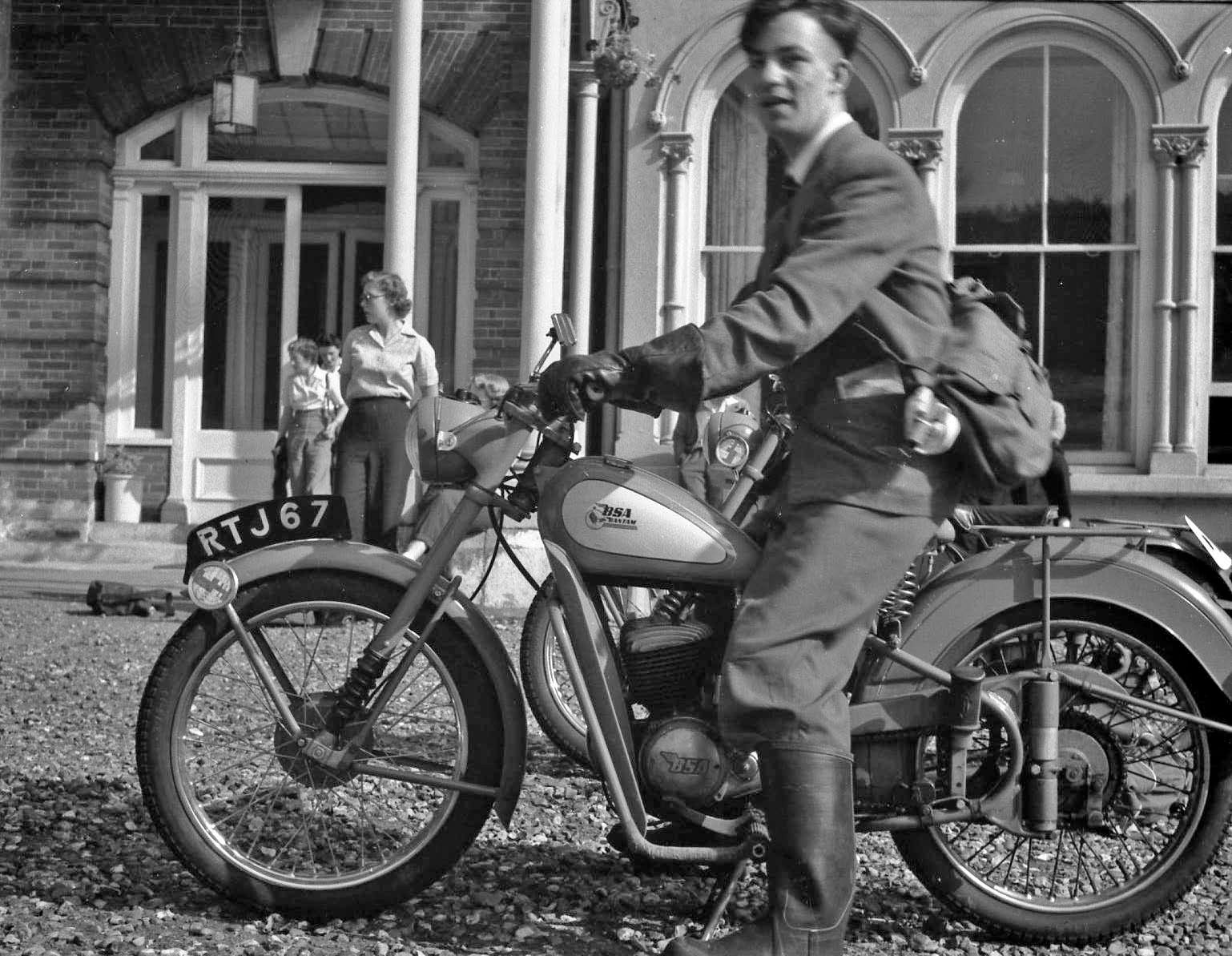 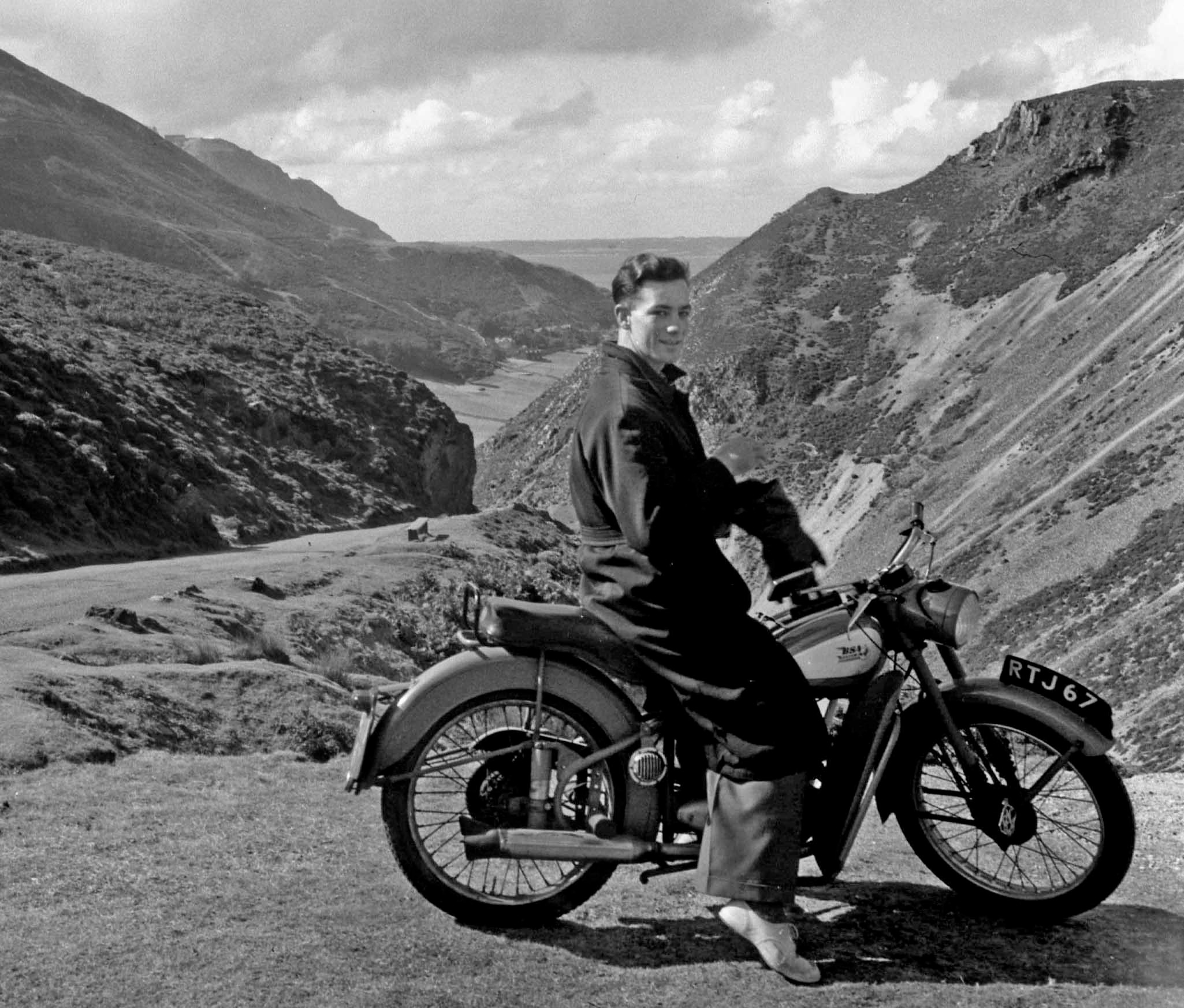 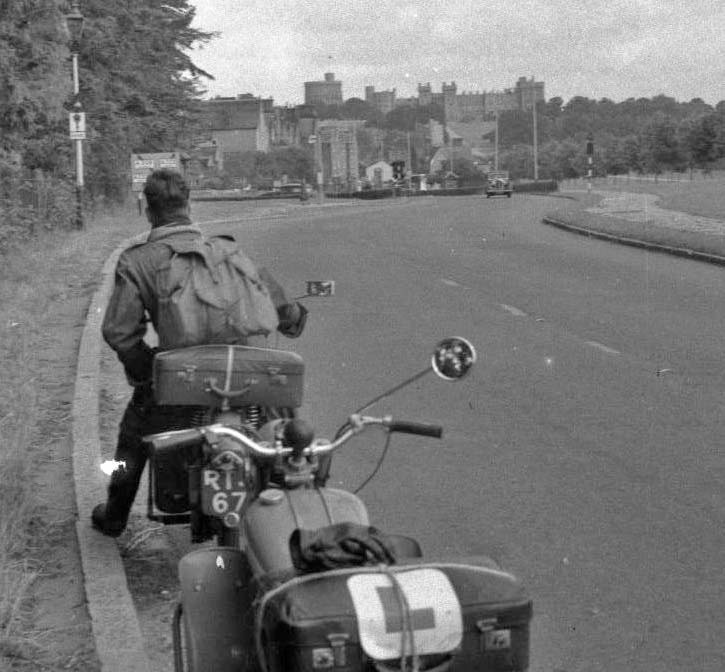 Hi Alan and a very warm welcome to the Club. Lovely pics and a great story. I think you're D1 looks great pretty much a s is. They're all the rage " au natural" just now rather than all polished up -  but it's up to you and there will be plenty help and encouragement for you here, whatever you decide to do with your bike(well, your mum's bike 🙂 ).Probably best to start a new topic in the restoration section of the forum mow to chart your progress

You will find just about everything you could ever want on the Forum via the FAQs and technical sections;  ** Please log in to view **.  You'll find that everything has been covered before- at least twice! 🙂 So have a good look around and you'l likely find plenty of info there already. If you get stuck  - just ask 🙂 It makes life much easier when searching to use Google and the template "your query bantam forum " e.g. "fuel mix bantam forum” you'll get much more focused results than using the Forum's internal search engine. And, of course, if you can't find it in the mountain of info, just ask and some of our very helpful and knowledgeable members will be only too happy to give advice. It's a good idea to include your location in your profile, as often there will be members local to you who would love to help and see your bike.

Good luck with your project - looking forward to seeing your progress

Don`t get many Bantams with that level of documented lineage. Great photos Alan, all the best with the rebuild. Luckily all moving parts are available, and most fixed parts too. Look forward to following your progress, it may inspire me to crack on with my D1 Rigid, which had a much less noble entry into my life, introduced to me in Leicester`s Highfields in a wheelie bin c30 years ago.