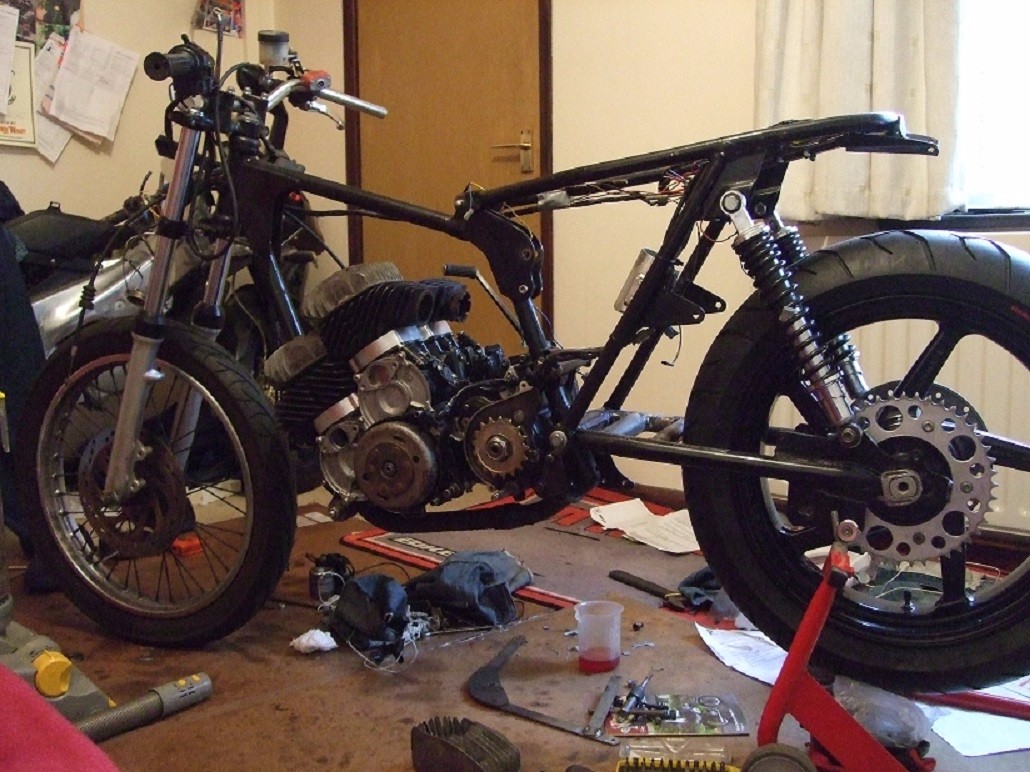 ... then a change of underwear?

Must be a hoot to ride, how much difference will your mods make?

Tell us more. It's Madder than a box of frogs

Fantastic machine, Roy. Can I book a ride on it.

Hi. This build is in my "** Please log in to view **"  in this Hybrid section, page 3 ish. Though the pics that were on Photo bucket no longer work as its not a free photo storage site any more...Still a few pics to see though. Here is a link to a pic of PUB (Vincent) that is local to me and my other Bantam. Scroll down the pics and read the bit about my Bantam screaming up Sunrising Hill on the Banbury Run...Haha

Though the pics that were on Photo bucket no longer work as its not a free photo storage site any more...

Brilliant write up and pics thank you.

Brackley is in Northamptonshire though, by quite a few miles!

Thanks for your comments and i will try and post a pic as and when it gets any progress. I'm keen to crack on with the rear end atm. Off with the rear subframe so i can strenghten the shock mounts and modify one support steel tubing to clear the drive chain. In the low sun kissed photo, the chain run and the rubber swing arm protector are being played with before i make and weld/bolt them in. Also the adjuster guides, adjusters and the caliper stay need to go on...All while keeping an eye on the Motogp on the telly...

Of no interest to you all. But, the widened Suzuki swing arm incorperates a section of a Bantam swing arm and also the chain adjusters already made are from Ariel Arrow cylinder head sleeve bolts which i think are 5/16 unf... Yes, i like to add a dash of British bike iron where and when ever i can... Some serious chain and sprocket components there Roy, much needed though of course...

Hi all fellow  Hybrid Bantam Builders. Keeps us busy before the build up to Xmas

A bit more done on the bike,tons to do though..... 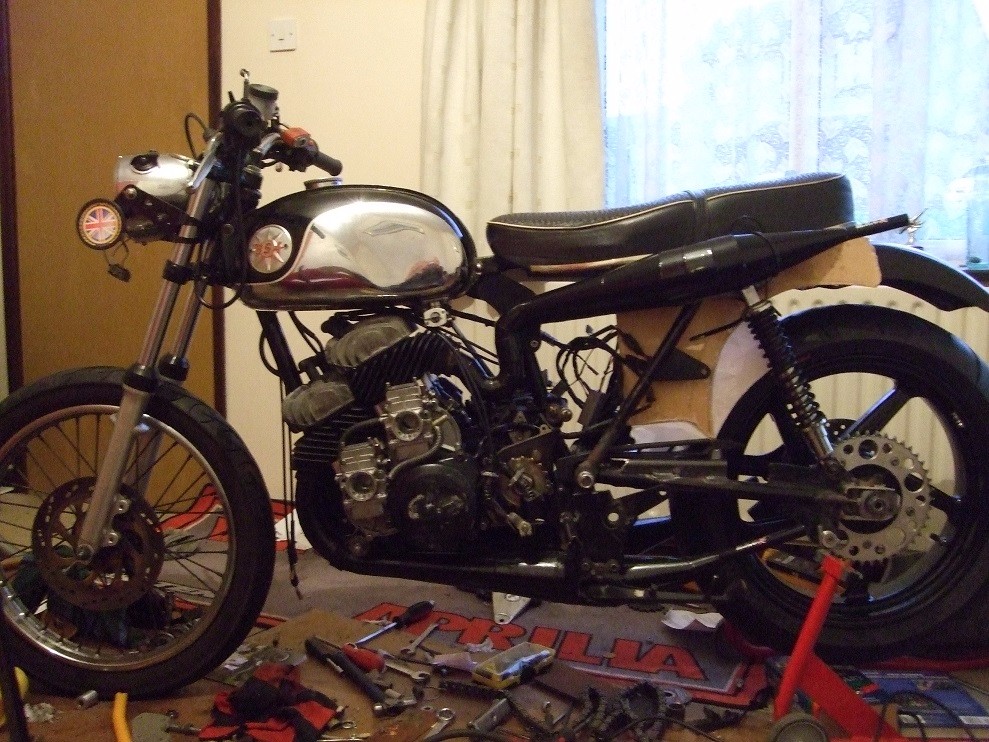 It's getting there, what is the cardboard for?

Hi. I'm playing with  templates of cardboard and paper... I'll cut out the parts  ( 3mm aluminium ) for the new lower rear mudguard, oil tank and air filter trunking, form them. Then off to see the welder. 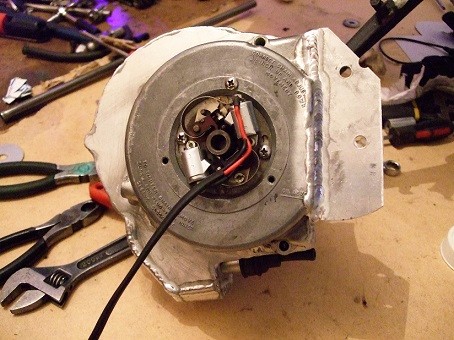 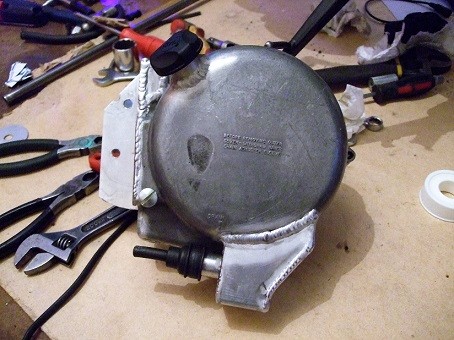 well, a bit of welding and a slosh of paint,front calipers, rear brake master cylinder, finshed off the rear brake hanger. So apart from finishing off the rear mudguard.... !!!! Looking good.... just the electronics/traction control to sort then?

Have you any mpg,bhp figures?

Thanks for the replies... I get asked a lot about the bhp/mph and mpg. 120 mph crouched down with your lips being pushed out of the way by the front of your full face helmit, with your teeth against the chin guard (Kawasaki Z900 days ) and 93bhp @ 10000 rpm. No, SERIOUSLY, it's a Bsa Bantam frame with the  iconic Barry Sheene 4 cylinder engine using Ariel Arrow cylinders. But people do want to hear, and tell others, that this kicks out Huge hp and does silly sppeeeeds.  Its nice listening to folk argue about what it is and the numbers they quote. At the Brackley show i was told by a senior Vintage mcc member that 2 grown men nearly came to blows over what the engine was. At the Copdock show ( see page 9, Suffolk rep report ) one gent was discribing the wrong 4 cylinder one while pointing at the other one. Made us smile.. As to the mpg, this one does drink it. Am i right to think a Bantam holds about £9 worth of fuel, well 40 miles later and i had better be on a forcourt...haha. We went over to Peterborough from Northampton. Filled up in Wellingborough on the way and did the back roads to a motorcycle showroom at p'borough. Well this is a photo of a Jawa fuel tanker being sucked for the 500 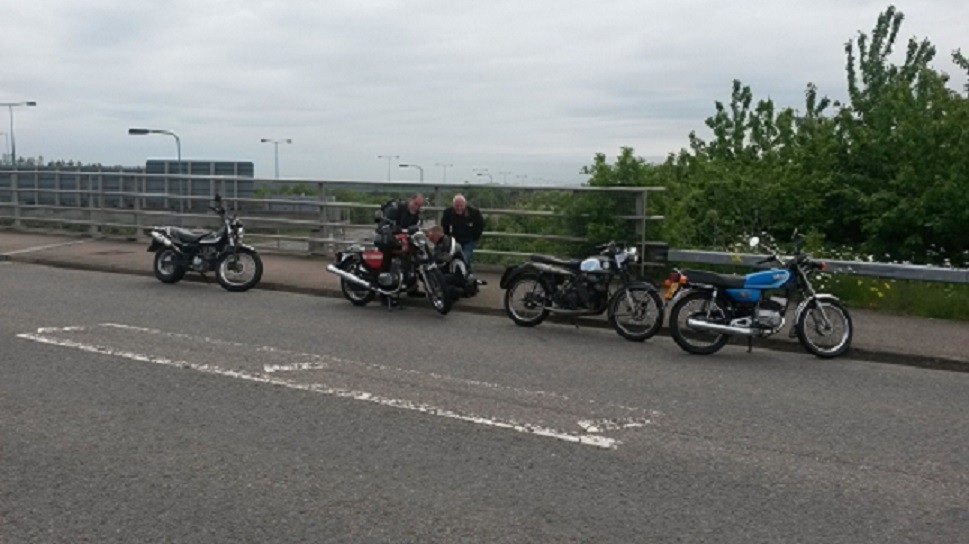 You should upgrade to a D7 tank. It would increase your range by 10 miles!

or just maybe get out the 250 Bantam for a better mpg... Q..Is that a dad and his son finding humour in the Bantams..... Well, i'm closing in on getting this all done...I nipped over to Alloy Paul's for a couple of hours welding... Then back for a fitting and it's "not bad"... It will need dulling down a bit, as it's a tad bright.. Now i need to fabricate the rear lamp and number plate holder, for welding on to this shiny bit.. I've left the front of the mudguard open on this one.  So on fitting, you close up the front as it gets fitted from the rear, then release to pop out over the battery and tinware lugs on the rear frame..Then a plate is bolted on as a guard. It needs to be reconised as Bantam  as much as i can (although be it getting distant as we build our way into these, humorous hybrids). Happy days.. 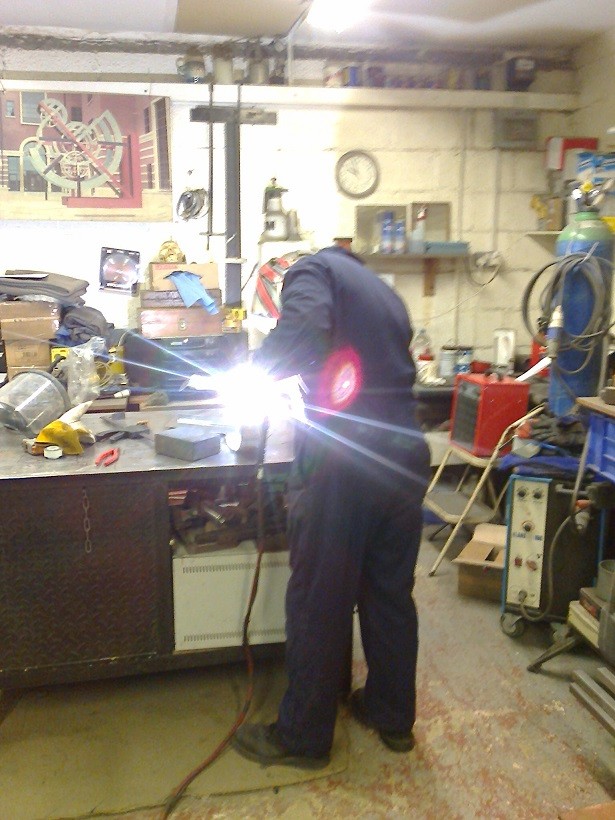 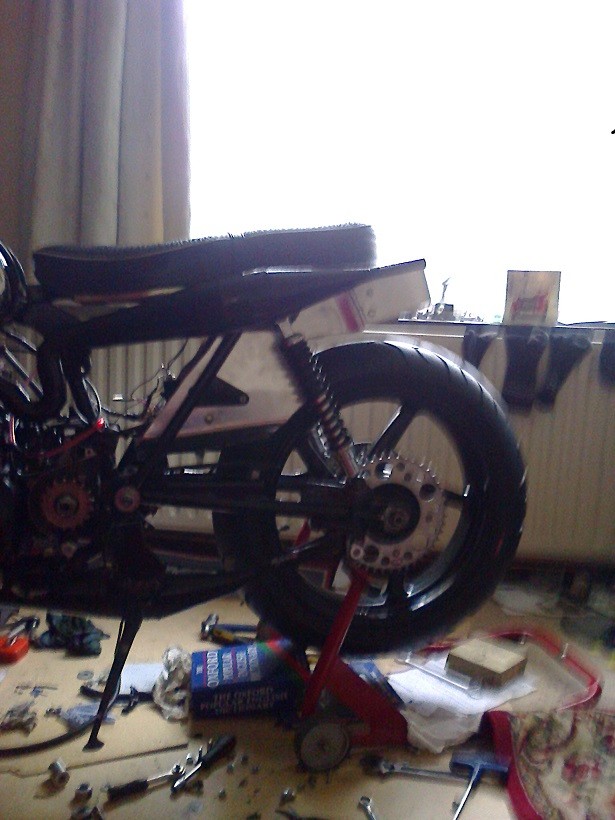