Classic Motor Show at the NEC - it's on this coming weekend!

The Club stand will be featuring 16 assorted Bantams  and we have a number of different displays covering the spectrum of the Bantam range, and different interests.

Want to meet the YouTube Bantam Building star? On Friday 12 November, Eddie McGee will be on the Club stand. Eddie has recorded a series of over thirty bite-sized videos, working through all the steps in rebuilding his Bantam as he restored it. His YouTube channel is hugely popular with some 300 subscribers and around 15,000 individual views. This was Eddie’s his first restoration; he’s not an expert mechanic and he did the work in his own garage with just basic tools. He’ll be delighted to chat to visitors.

Interested in Bantam Electronic Ignitions? On Sunday 14 November, John Sunderland and Mick Fern will be on the Club stand. These are the blokes who developed and are manufacturing the electronic ignition systems previously retailed by Mike Kilvert. John & Mick will have a specimen system with them to show visitors; and they’ll be able to answer any technical or after-sales queries.

This will be John & Gina Hinde's first event as the new 'Events Team.' For anyone who has missed going to events during the Lockdowns - this show is a great tonic, and it is especially recommended for petrol-heads of all hues. See your September Banter magazine for details of discounted tickets. 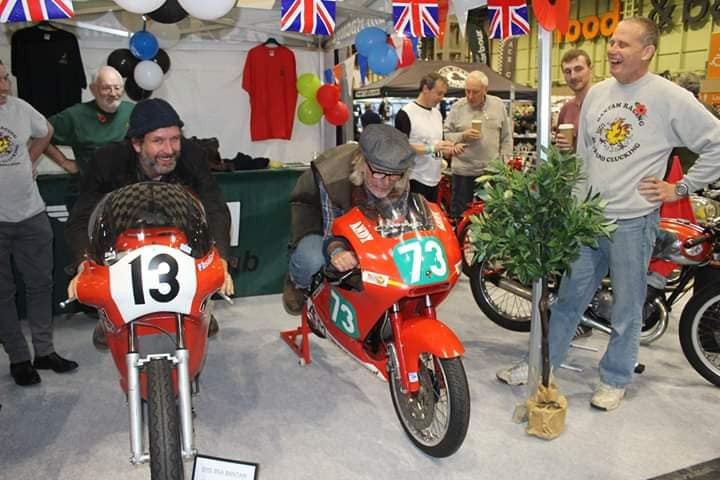 Above picture shows Henry Cole and Sam Lovegrove on the Club stand, trying out Bantam Racers at the 2018 show. Special mention here for the late Mike Kilvert, who's  watching proceedings in the background.