I read that someone has fitted 6 volt LED indicators to their D7 & B175 Bantams. There was a link to a complete kit somewhere on the Forum but I can't find it. Any help finding a suitable LED complete kit appreciated.

Hello, welcome to the forum. Nice of you to introduce yourself.

Be careful when ordering those eBay 'LED' indicators. I bought a set only to discover that they are fitted with ordinary filament bulbs. As they were cheap as chips, I decided to keep them and ordered a set of 6volt LED capless bulbs.

I don't think you can buy a ready to fit 'kit' so you will have to order the individual components. I've just fitted LED indicators to my D7 and this is what I bought ( all from eBay)

Indicator set . (Doesn't have to be LED. 12v set is OK, just change the bulbs for 6Volt LEDs) 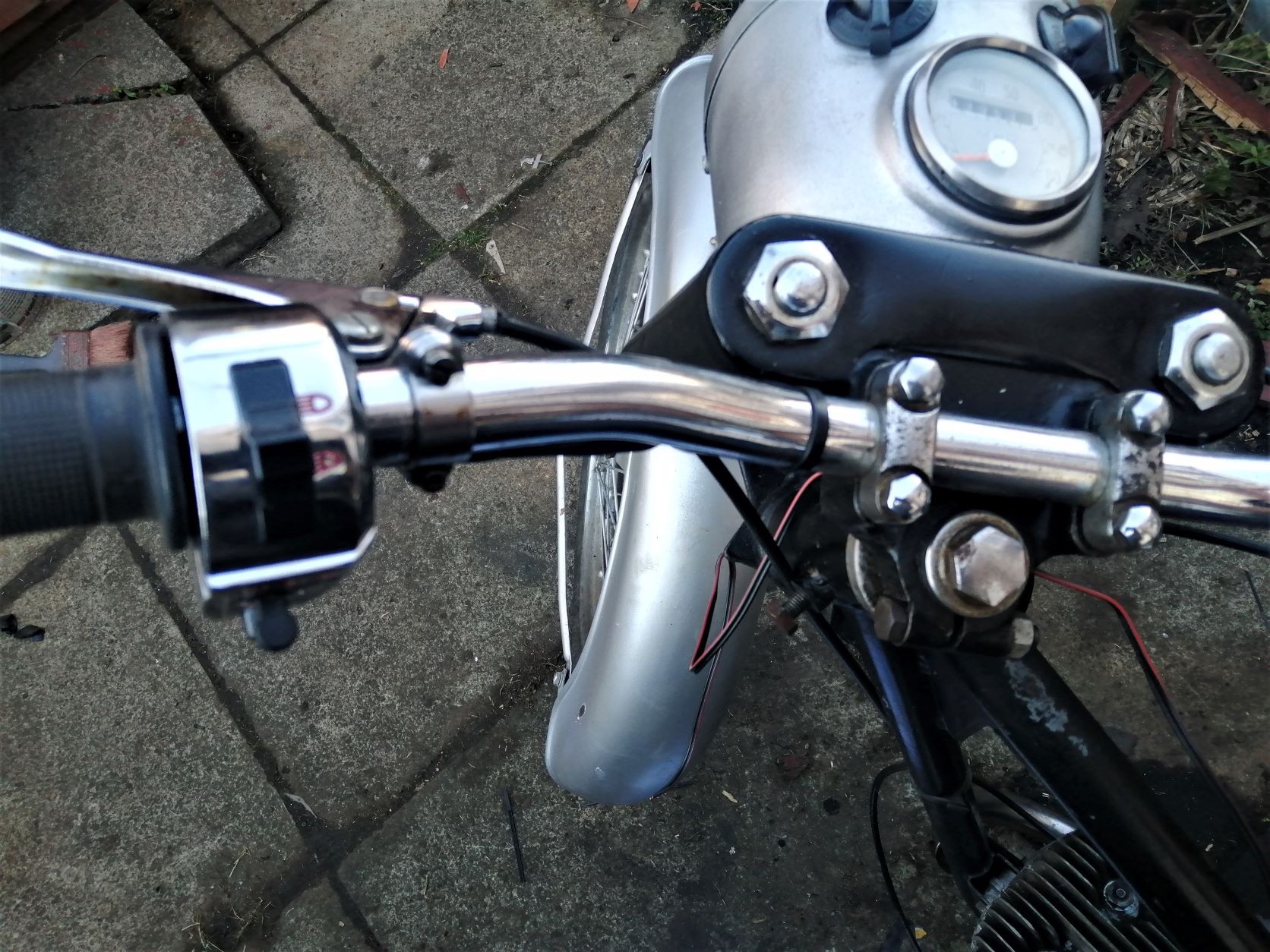 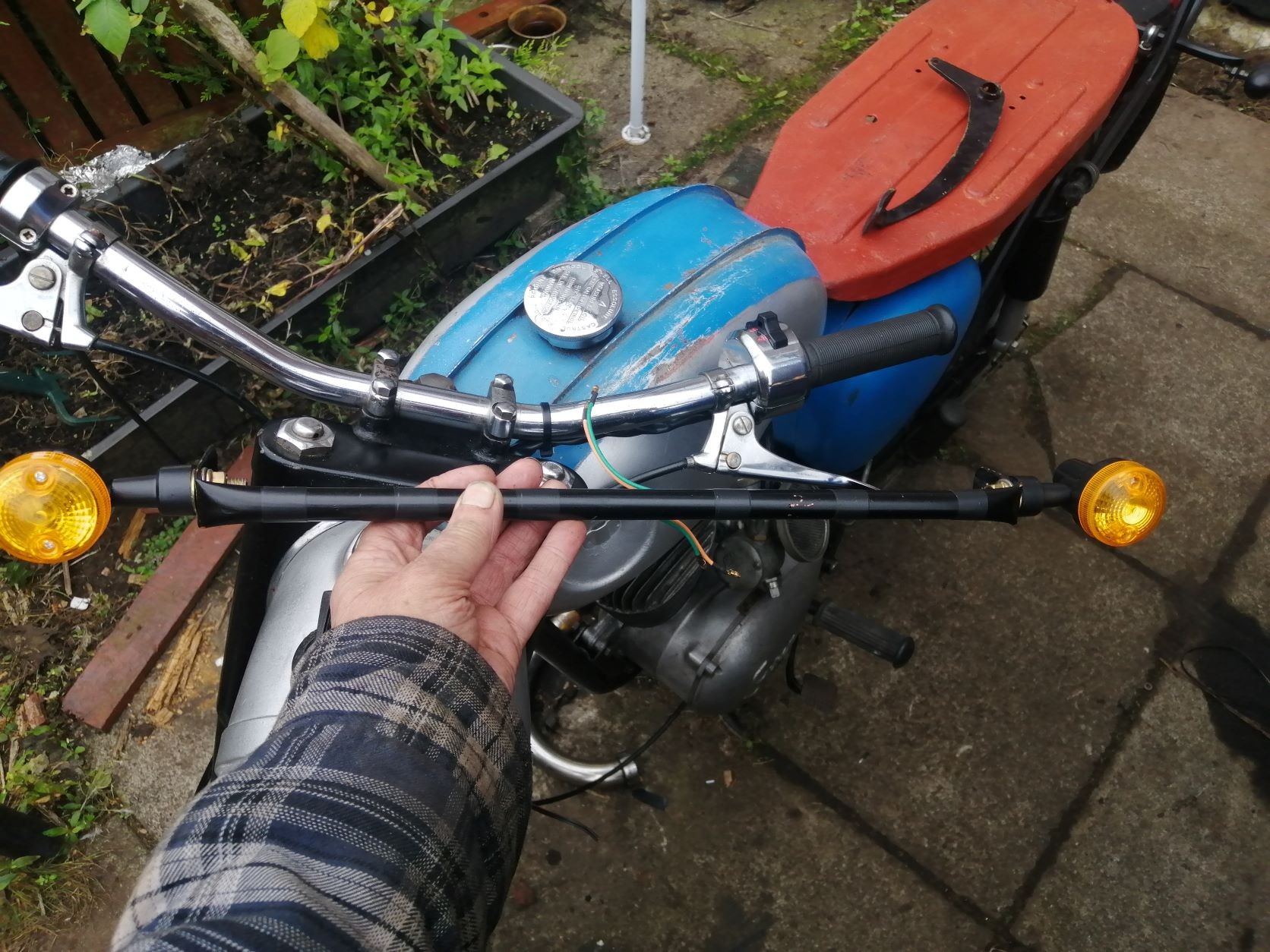 The Flasher unit was mounted beside the rectifier.

I have sent you a message thru the  Facebook bantam site earlier today.

I understand that the kit needs to be 6v, with the replacement lens fitted.

Please advise me if you are satisfied with the end result,  using your new battery also.

Hi Terry. Can't see your Facebook message.  I just took delivery of the flasher unit today so haven't wired it up yet. However, I tested the LEDs with my new battery and they work fine except that I think that they are too bright and tend to wash out the amber colour of the lenses. I tried them with the original 6volt bulbs and they looked a lot better and certainly bright enough. I'll have to do some tests to see whether I want to keep the LED setup with the wishy washy lenses or revert to the nice amber colour of the original bulbs. It really depends on how much current drain I get with the normal bulbs. My battery is a 6ahc so should hold up OK. If worst comes to worst, there is enough room to fit a second battery wired in parallel to give 12ahc which should be more than enough. I'll update once I have some results.

Thanks for your reply. My only thoughts would be the charge rate from the rectifier to the battery. The output could be effected by adding

the indicators,  as the headlamp dip/beam brightness relys on the rpm of the engine. I hope it all works okay.

You can get LEDs that are amber, which work much better behind amber lenses than white ones.

I imagine that an intermittent 40w load from incandescent bulbs will cause the head and tail lights to flicker in time with them at idle, particularly if the brake light is on at the same time.

A number of years ago I had a TZR 125 that suffered from that issue really badly, and it was cured completely with the use of amber LEDs in the indicators.

I agree that amber LEDs are the answer but I looked high and low for 6volt Amber capless LEDs and was unable to find any until today when I discovered that 'Classic Car LEDs' supply yellow LEDs that work on 5-12volt, Pos or neg earth for only £0.57 each, so looks like the wishy washy indicator problem may be fixed and I won't have to worry about the problem of current drain associated with incandescents.

You do realise those 59p LEDs are car dash warning bulbs,
and are a 286/T5 fitting and only 25 Lumens (measure of brightness) led flasher bulbs are around 300/400 Lumens

I wasn't going to say anything, but now he has.

I wondered what these indicator bulbs were, for only 57p, so went to the web-site .....

I have spent some time looking for indicators to put onto my D1 – I soon found out there are a fair few feeble (cheap) ones out there – the current plan is for bar-end indicators but to get the brightness I want in daylight are going to have to be 12 Volt – the best don't exist in 6 Volt .....

It's one of those apparently simple jobs that turns out not to be not so simple ... 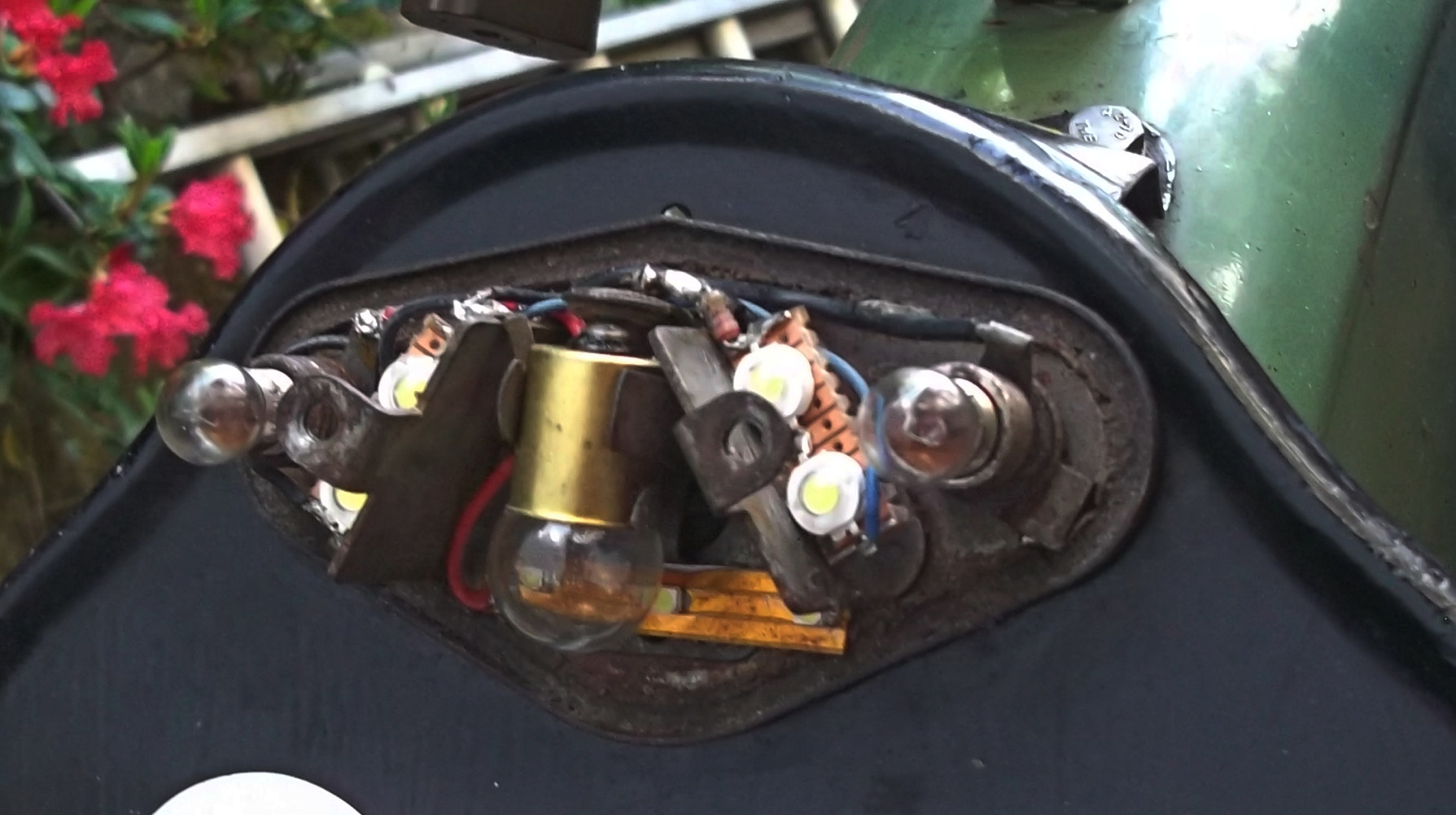 Just a wee update. Having cocked up and ordered the wrong amber bulbs ( as some of you picked up on ), I went back to my original bulbs which were far too bright and washed out the amber lenses. 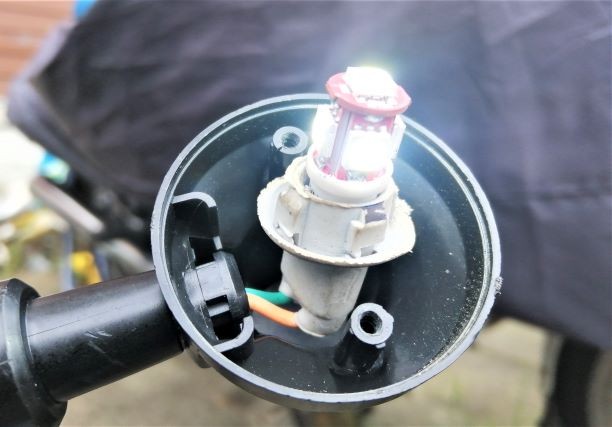 Happily, I remembered that I had some amber acetate in my photographic junk box so made some wee sleeves. 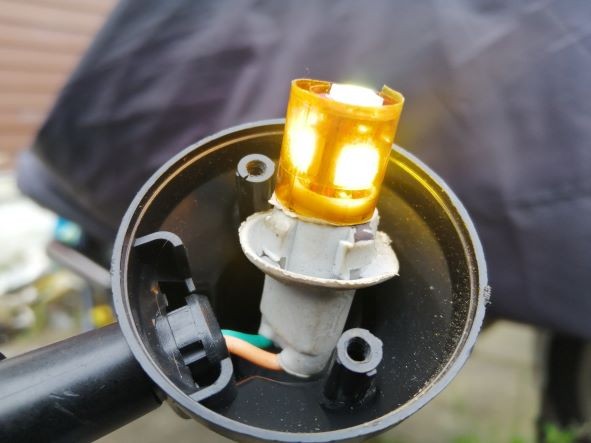 That seemed to do the trick and now I have a set of 6Volt indicators which are both bright enough and amber enough. 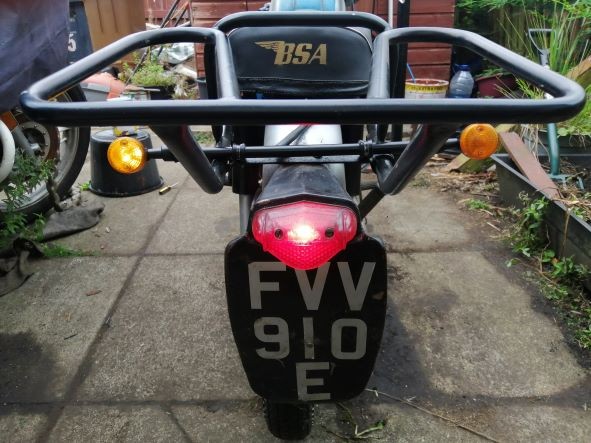 Just to make sure, I checked them out with my light meter and happy to say that they pass the 'brightness' test and are certainly up there with the 12volt indicators on my other bikes. 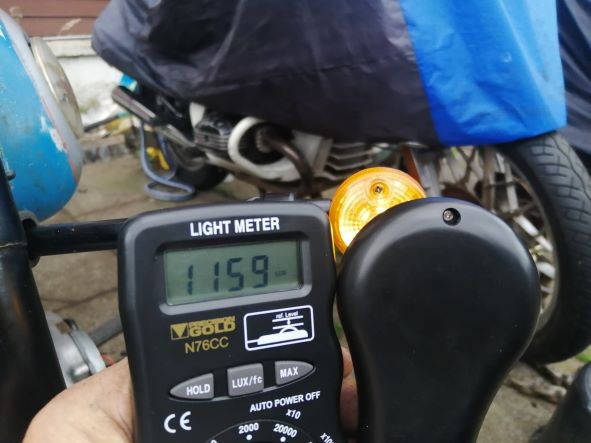 The other consideration of course is battery drain. I started the day with a fully charged 6volt, 6amp battery. After mucking about with dodgy connections and testing etc I reckon I ran the indicators and brake light for around 15 to 20 minutes with no charging. At the end of the day, The battery was still fully charged with 6.2volts. 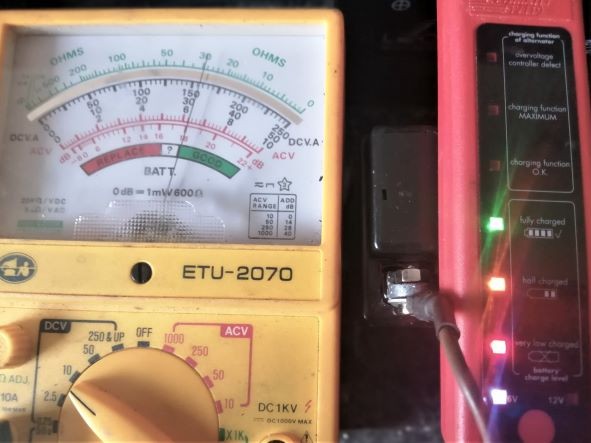 All in all, I would say that that was a success. The next task is to get the bike running but it is being a «censored» to start. There is a strong possibility that the crankcase seals are jiggered as the bike has not been started since 1981 so that is the next project.

Congratulations - by the look of it I'm guessing these bulbs, the ones that work, are 'too white' hence you had to add the amber film. This is why on Classic Car Leds there's a page that bangs on about choosing the right LED colour to suit the lens colour of the lamp, e.g. red for tail light and/or stop light, amber for indicators even with amber lenses, failing that, 'warm wihte', which has more light in the lower spectrum so will work with e.g. a red lens, whereas your typical 'cold white' will struggle as most of the output is nearer the blue end.

There has been a great deal of effort put in by yourself on this issue.

I plan to fit the system onto my d7 over the coming months, prior to having the bike restored ready for the road.

Due to this modification,  I would prefer to have an mot, although I believe this may not be necessary because of it being classified a historic vehicle.