Sounds like the dog's a lot smarter than all the humans put together!

That piston is one hell of a mess, well done to you all, I hope Kimble is OK after your singing to him.lol.

Sadly, today I was told that a biking aquaintance of mine, Brian Graves, has died after an illness. It was a bit of a shock as he seemed to be improving....basically toxic shock after a throat infection....a great pity as he was a Bantam fan and Bantam Club Member, the guy who suggested I should buy the Suzuki SP that I'm rewiring, and the man who was arranging a week's ride in the Pyrenees in June.

He came with us on our run round the UK back in August 2015. I liked him very much. No nonsense, no bull, lots of common sense, a proper Sid James style laugh and easy to get on with. In looking back at the pics and stuff I have I realised that this little bit of film, taken by Brian's mate Doug Mitchell has never been uploaded to YouTube so I'm making amends. Brian's not on it - he and Neil had dashed off far too quickly for Bantams....

Basically it's me, Phil, Alan, Denis, Paul, and Rich (with the field kitchen) slogging up out of Stanhope towards Blanchland and then over the hills to the west of Consett towards Corbridge, mostly in Durham high above Newcastle upon Tyne. Corbridge didn't know what had hit them when we all "blue hazed" around the town.....(Neil and Brian were lost somewhere over to the west of Rothbury at this point)

Here is the whole group in the station at Stanhope having a cake and tea. From the left: Paul, Denis, Phil, Rick, Dennis who drove the back-up van, Alan, Rich, Neil, Brian (with silver hair) and Doug. 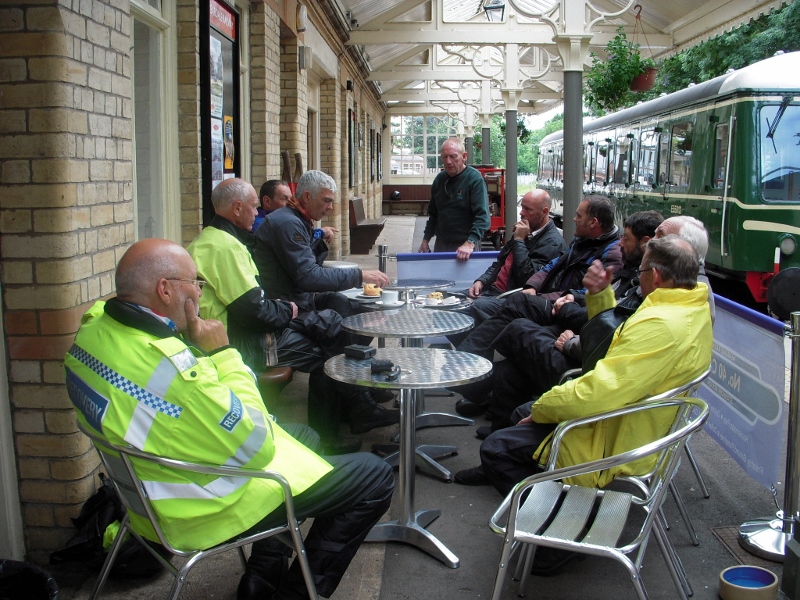 Great bit of footage, Rick. Sorry for your loss...

I'll echo that shock and sadness, I only met Brian on that trip but found him good company, as Rick says, no nonsense but good fun and interesting to talk to.

Yes very sad loss, the film just reminds me what a great adventure it was, our D1's sound like a someone shaking a biscuit tin of nails ! not surprising for mine as it only had one and a half piston rings ???

Sad news indeed.I am sorry to hear about him.

My condolences to the family and friends.