Looking the other way.
My favourite books of all time were written by a man named Clifton Reynolds, he wrote a series of books about  farm named Glory Hill which was on the A41 between High Wycombe and Beaconsfield.
I drove there many years ago and found it quite easily, but yesterday I'd forgotten about the M40, which now cuts the farm in two.
I started out at about 2.30, but decided to use the bigger roads.
I was hoping the reducing of points gap to 6 thous and lowering of main jet needle together would have both stopped the pre ignition noises in the silencer and maybe improve performance and maybe too, give me better fuel economy.
A422, to Brackley, A43 to Evenley, A421 to Finmere market roundabout, then on to Bicester where I picked up the A41 toward Aylesbury.
Somehow managed to lose the A41 in Aylesbury and found myself on the way to London via the A413.
But I didn't fancy going through all those villages like Wendover etc, which I normally would, I just wanted to get to my destination, for a change!
Made quite a few mistakes having set off without a map, except for the one in my Oxford bag, which finishes southwards at Buckingham...
I must admit that bike went very well, but at full chat, about three quarters throttle still, there was that old pinging rattle again, plus about 45 mph seemed to be my best top speed, even downhill, also I didn't want to punish the engine on such a long run, after all the recent rebuild work too.
The plastic over trousers also helped me to keep warmer than I'd been without, another good reason to carry and wear them on dull days.
I saw lots of interesting things that I now wish I'd taken pics of, but I was in a hurry to get there and see what I'd come for and hopefully take pics of the farm and maybe walk the footpaths around there.
"Never go back" people do say, maybe because things are always changing?
** Please log in to view **, on Flickr
St Joseph's church here, on the way to Chalfont St Peter.

I began to remember other places names as I rode around, trying to imagine the maps I'd read at home but no brought with me.
Bourne End was one, Jordans, which according to the books, was a Quaker community, I stopped to take this pic, thinking I was already there, but I was on the outskirts of Chalfont St. Peter.
** Please log in to view **, on Flickr
Coming to the little roundabout at the T junction here, it was ten to six, I dismounted and had myself a meal of fish and chips here.
Made sure I rang wife at 5.50 to say I'd come a lot further than anticipated and would be quite late, but I had already eaten.
** Please log in to view **, on Flickr
£7.10 seemed like a lot for the large fish and warmed up chips! But I ate most of it, being quite hungry, last meal was at about 1 PM.
Odometer read 357, all the odds, when I first left, so at Gerrards Cross I filled up with fuel again, as odo then read 445, 87 miles covered.
Wooburn Green I visited three times as well as Flackwell Heath, just unable to find any road or lane giving me a clear view of farm, or even the Chilterns Glory Hill view that the farm enjoyed in the books pictures.
I first decided to go back and pick up the Amersham road to go back, but I missed it somehow and ended up going Marlow way, I knew the way home from Marlow, so I decided to go for that.
With a full tank and stomach I made my way gradually homeward.
Suddenly signposts with A40 and M40 notices on began to appear, the idea of cutting out many now unnecessary miles seemed like a good idea.
So plumped for the A40 way back, Oxford direction, to be more precise. Somehow missed the A40 again on next big roundabout but found myself on the M40 instead, I was on the outside lane on the roundabout with lots of fast traffic, I doubt I'd been very popular if I'd suddenly decided I wanted to get into another lane, with no indicators or yellow jacket, day was dulling down too.
Bike went quite well on the motorway, I kept right to the very outside of left hand lane, with every single vehicle overtaking me including enormous lorries.
There's a quite deep cutting into a high grassy hill with a maybe 1.5 mile section downhill all the way, I felt like I was doing close on fifty, with engine on full song.
I had to throttle back as lorries' draught was drawing me ever faster down the hill.
With a sudden Wahhhhh! noise, piston I imagine had had enough.
I immediately pulled in my clutch and just coasted at least a mile of the rest of the decline.
I was very close to a turn off for A40, Oxford was 13 miles and Princes Risborough could be reached from same turn off.
I stopped dead opposite the high green hill and wondered what to do next.
Engine had cooled right down and restarted third kick!
I got off the motorway and onto A40 for Oxford way, then turned again for Thame and Risborough, it was a longer way around, but I was no longer thrashing the bike all out, just to try keeping up with others doing 70 mph.
Came home my fairly usual way via Thame, Long Crendon Chilton,Ludgershall  etc, and was very glad to be doing so forget now but I think it was about 8.30 when I parked bike up!!!
** Please log in to view **

That's a great day out Mags. Well done for braving the M40!

what do you reckon is you average mph on these longer trips?

Thanks for the encouragement stubaker58, even taking off for the two stops, I generally have a job to average 30 mph, nearer 25 as a matter of fact.

But Bantams were never about speed to be truthful, the joy of being there and having hours to 'waste' doing what you enjoy doing, is what really counts, for me.

That's about what I'd worked out would be realistically possible.  I was trying to estimate how far I could go on a morning's ride around Suffolk.  My four speed D7 will reach 50mph but is happier at nearer 40.

keep up the good work, great to see the photographic record, I'll try to Take some next time I'm out.

Inspired by your example I decided it was time for another outing, nowhere near as long but a very enjoyable ride around the Suffolk lanes.  Out from Felixstowe to Henley church and the Waldringfield and home again.  Around 25 miles in total, I braved a short section of the A14 (and saw 55mpn on the speedo!) but mostly stuck to back roads at around 40-45mph.

The bike went well and, following some work to replace the base gasket and fit a B175 centre plug head, it kept all its oil inside rather than all over my boots. 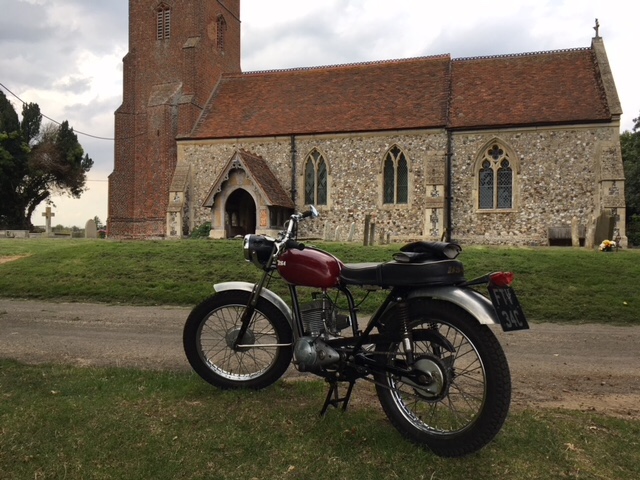 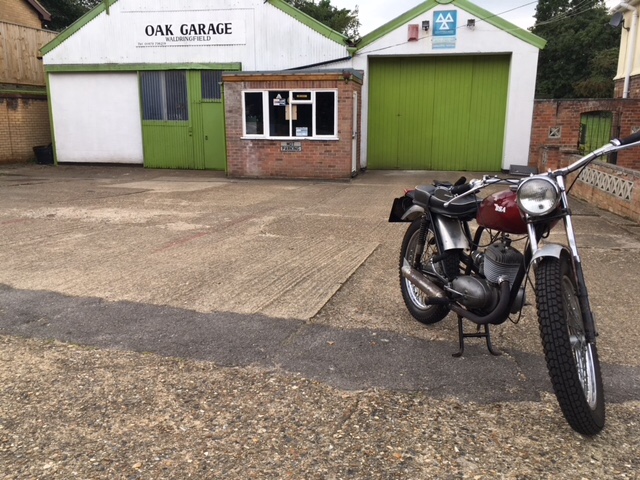 Well done, once you get confidence in your bike (and maybe some breakdown cover too!) you can keep increasing your mileage and maybe join others on regular or irregular rides out, good luck.