So why not banish those thoughts for a couple of hours and come and have a ride around some Devon roads. Mud, horsepoo, tractors; but that's the dual carriageways so we'll steer clear of them.

All the fun and frolics start 10.30 Saturday at the Haldon Chalet Cafe at the top of Telegraph Hill (A380 Newton Abbot road from the A38 at Kennford) which can be accessed by a number of side roads - look at a map (remember them?) - if you're riding there; or there's room for a trailer or two (best you have at least a cup of coffee in the cafe) in the carpark outside.

About 30-40 miles depending on the weather. Some narrow lanes, plenty of leaves about, could be slippery, you will need to take care.

Well, what happened was....... the turnout was the best we've had Bantam-wise despite the time of year. Not much slippery stuff on the way round even though we were riding all manner of roads from grass-down-middle lanes to the A380 dual carriageway (not intended but then needs must) on the way back....

We started out at Haldon Chalet caff at the top of Telegraph Hill with no less than 8 Bantams and a H(cough)ley Davidson (well his Bantam is very dead after the 24" Stillsons episode in North Molton) and rode under bright but ominous skies along the Haldon ridge to almost Dunsford on the edge of Dartmoor, then down the Teign Valley to Chudleigh. We were on our way to Dawlish when an "incident" occurred with Tim's D7 (spat-the-gasket) so we decided to go for broke and run back to the caff  via the A380 dual carriageway (Tim's D7 ran well without a head gasket!). 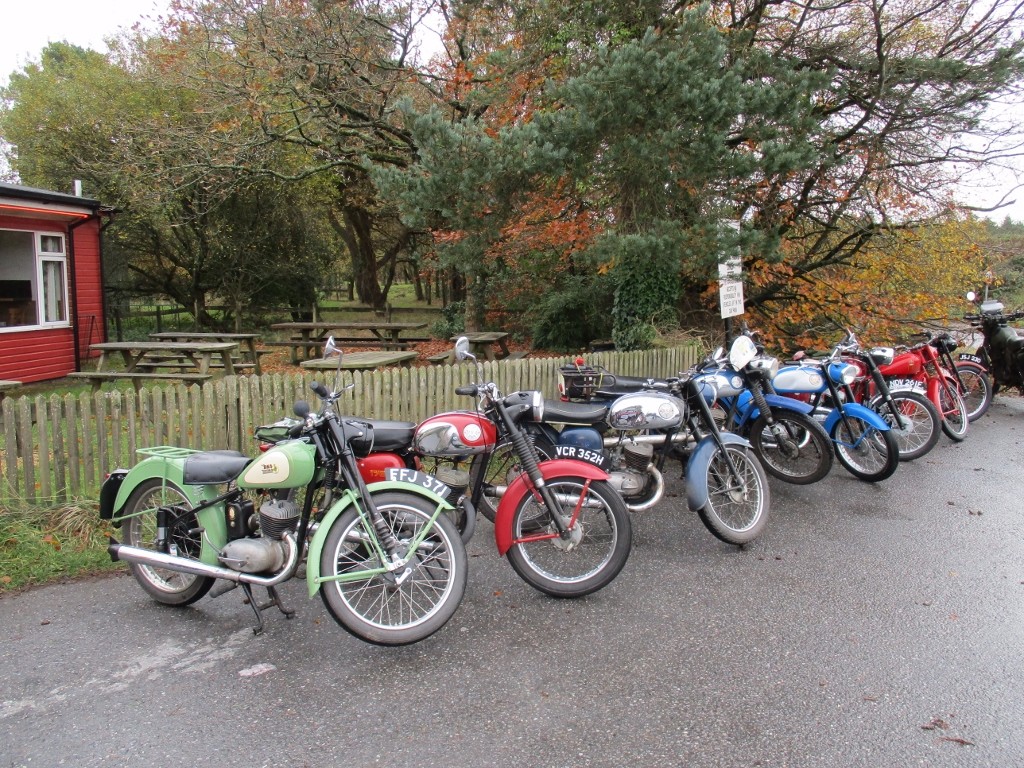 Despite Tim's fist time out with us and his head gasket making a bid for freedom he seemed to have enjoyed the experience and has even recorded a fair bit of it here: ** Please log in to view **

Really enjoyed that, thanks for posting, what camera did you use?

Mags 1 said
Really enjoyed that, thanks for posting, what camera did you use?

Yep Fantastic footage............really enjoyed looking at what riding conditions and countryside you guys ride in.

Who came to the rescue....................Rick! Glad to hear the D7 came back to life after ditching the remnants of the head gasket. It sounded like it was running well. Actually all the Bantams looked well fettled and running well......Who says they're unreliable.

As for coming to the rescue - thanks for the praise .....well actually big Rich (Major Thom) was first to help out as Bernard and I had disappeared of down the road going some distance before I realised the rest weren't following....and Rich had sussed the lack of compression and the possible causes - I just happened to have tools available to hand to whip the head off and have a look before condemning Tim and his D7 to the mercies of "Rescue". We would have used the back lanes but the consensus was that the direct route which involved just a bit of dual carriageway would be best so that's what we did. All in all a team effort.

Apart from that, Brian broke his kickstart (the folding bit snapped - pattern parts, guv') so needed bumpstarts, but everyone else ran well.

Well done Tim on posting your film footage, nice to look back on the ride.  Good you were able to join us.

Bernard and Bertie the Bantam!

Hi Devon and Cornwall.
Glad to hear that you had a good time on Saturday. I would have made the effort to join you but unfortunately had to pick up some parts for my Honda in Kent on that day.
Hope we meet up again sometime.
All the best.
Mike.