Hi, I have a D14 which I am having big problems starting. I have had it rebored and a brand new piston from Rex Caunt.

when on top dead. This was similar with the old piston. I am not up on 2 strokes but this doesn't seem right to me. Is it possible

that an incorrect crankshaft/con rod has been fitted prior to my ownership. The crankshaft had been removed previously as the

tin web cover is missing on one side. I have also fitted a new carburettor and Electrex World electronic ignition in an attempt

to get the bike running all to no avail.

Thanks for reading this and look forward to any HELPFULL advice.

Its going to play havoc with your compression.

Only a guess...incorrect conrod....prob needs a strip down to measure things up.

I think a space between top of piston and cylinder is normal - it certainly is on a D3 ( about 3/16" from memory). Sounds like you have been throwing money at your bike to try to get it running. It has often been said that fitting electronic ignition will not necessarily cure a starting problem and an engine can normally be started on a poor carburettor (assuming it is complete and clean). I think we need to know more about what you have done before offering better guidance. For a start, though, you can measure the stroke by simply measuring between between the top dead centre mark and the top of the piston on bottom dead centre. I'm sure someone on here will have a D14 crankshaft handy to measure so you can compare with yours. 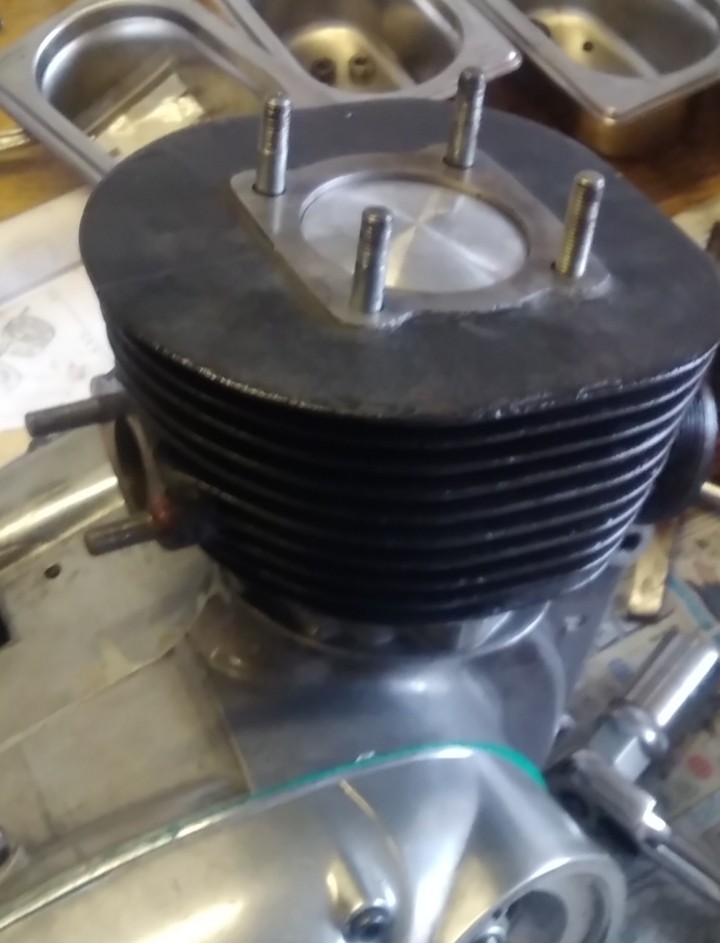 Dunno if that's any help not even sure it's at tdc.Seem to remember it being a couple of mm when I measured the squish band.Pretty sure every bantam ever built has the same stroke.125,150 and 175 just the bore that's different think its 52,or 56mm without looking I'm not 100%

Just asked my pal...his B175 stopped a bit short on its edge...the crown was higher of course.

He cannot remember how much short on the edge it stopped.

All I can say is that the D14 is the hardest bike to start and that the timing is critical. A few degrees out will totally change how it runs (or not!).

A slightly lower compression would improve it's starting characteristics but 1/8" below the lip sounds right.

The crank plates often fall off and are not worth replacing unless you are into high performance (i.e. real racing).

Not sure if the piston height is right or not from the photograph but that should not stop it from starting although it might run rubbish. First thing to check is the cylinder base to crankcase joint to make sure you have used only one gasket and do not have a gap there - please have a look and get back when you have checked it.

I would also like to see the inside of the cyclinder head - this may provide a clue.

All bantams use a stroke of 58mm. As Cocorico says, that is measured from TDC to BDC, no need to remove the barrel  - have a measure with a steel rule and also let us know what you find.    We can take it from there.

Hi.
I think that the piston height is probably OK. One obvious question is, do you have a spark? Not always easy to see with CDI as the spark is of short duration. You need subdued lighting conditions. If you have a spark then you need to check that you have timed the rotor as the instructions tell you.
I was asked to look at a members bike a few months ago that had no spark with the Electrex World CDI, and found that the connector between the stator and CDI unit had a pin pushed back. The connector has to be assembled correctly.
Just a thought.
Mike.

Peterg said
All I can say is that the D14 is the hardest bike to start and that the timing is critical.

Not sure I agree about starting well with low compression....mine was a «censored» to start warm before I re-bored it...compression went from around 90psi to 125psi.

The ket to a good cold start with mine is good tickle...keep the button pressed...not dabbing it...and let it overflow for 1 or 2 secs....if it doesn't start after 5 kicks...give its another tickle.

Mmmmm pic wont upload sorry...have to email it if you want to see it.

I see...didn't know that Mick.

nickjaxe said
Not sure I agree about starting well with low compression.... 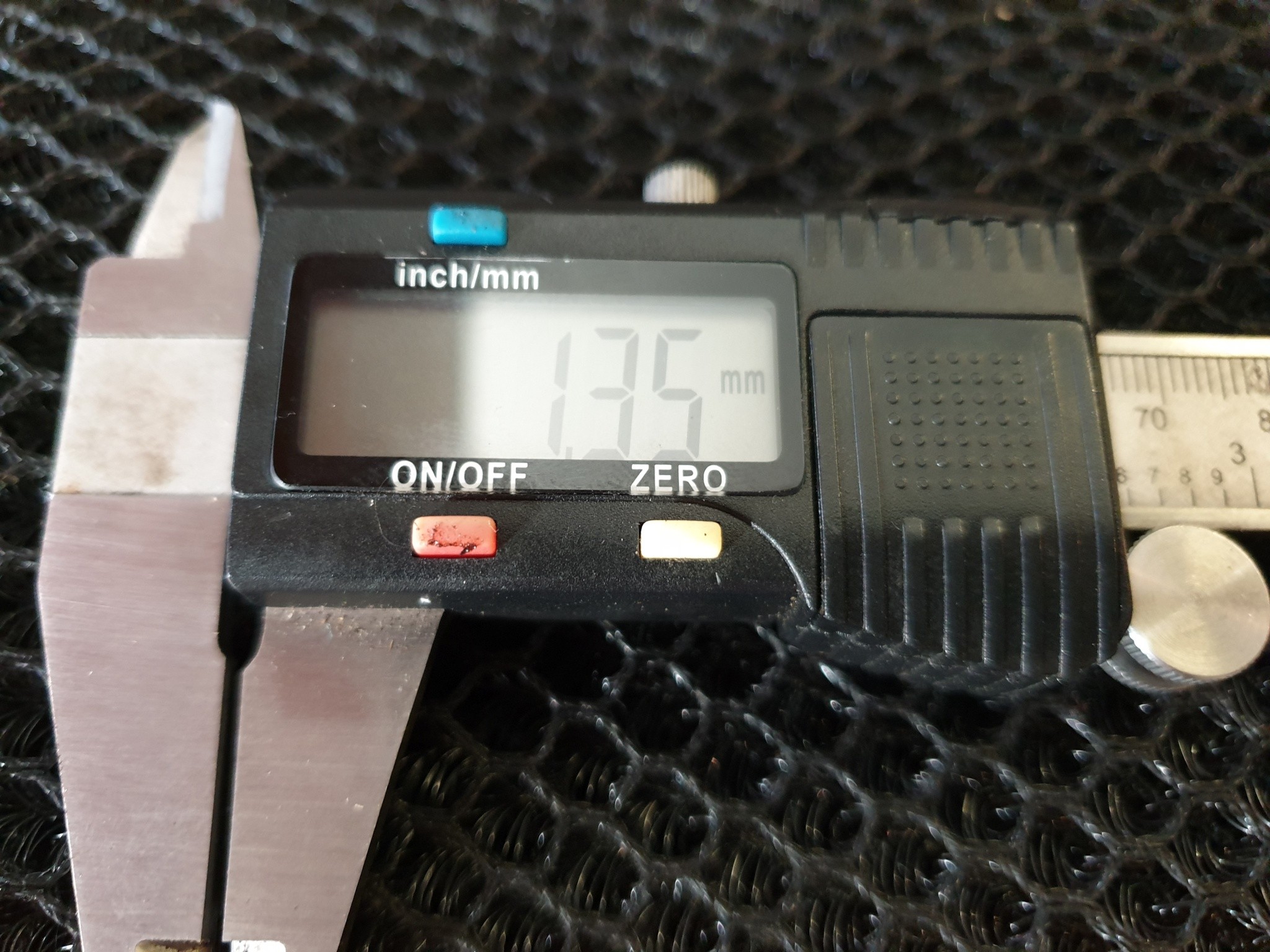 See pic.
Mmmmm pic wont upload sorry...have to email it if you want to see it.

I must have misled you Nick. The head wasn't off at all, I just decided it would be worth popping it off for a piccy for the forum. Only a 10 minute job to get it off, measure up and back on again.

Here is the picture I took. As you can see, the piston is noticeably higher up the bore than spacedmarine's. But as he said, his may not be tdc. As Nick said, mine is somewhere around 1mm to 1.2mm from the top, and is bang on tdc. It is a piston from Rex Caunt but it's from 4.5 years ago and he has switched supplier since then I believe.

I agree with Nick that lower compression makes for much harder starting. So I wonder how much compression Hairy would lose with his piston being over 3mm (1/8") from the top? Sounds way too much to me.

As someone else said, he needs to make sure the barrel is firmly seated and doesn't have too much gasket thickness. If it is seated and the gasket isn't too thick, then I think he has a problem. Either a short con rod or short piston.

I have a friend that has also recently fitted a Rex Caunt piston, and we will be stripping that engine on Saturday. I will try and remember to measure his and report back here.

Further to my previous comments, I didn't make an allowance for the carbon on the top of the piston. I would estimate that at around 0.5mm. So maybe mine is somewhere between 1.5mm and 2mm from the top.

Surely the fact that there is a gap between TDC of piston and top of cylinder is now proved as normal, we're also talking about 'gaps' on D14, B175 and D3, all of which are timed differently. Isn't it time to move on to other possible causes?

Maybe the OP will come back to us soon and let us all know where he's at?

A while back there were pistons being sold by a Bantam spares supplier that were hitting the crank with the skirt. This could have been caused by the gudgeon pin hole being made slightly too high up the piston. Assuming the overall length of the same pistons was correct, this would also cause the piston to fall short of the top of the barrel.

Damn I can only get mine to read 125.Its only on +020 and not been rebored,just had a light hone when I rebuilt it.Still knocks and pinks a bit at that.Tempted to add 1mm to the stroke if I ever get my new crank finished and get a 64mm piston just for kicks🤣 by my reckoning that would be a 192cc👍🏼

Damn I can only get mine to read 125.Its only on +020 and not been rebored,just had a light hone when I rebuilt it.Still knocks and pinks a bit at that.Tempted to add 1mm to the stroke if I ever get my new crank finished and get a 64mm piston just for kicks🤣 by my reckoning that would be a 192cc👍🏼

Out of interest, how would you add 1mm to the stroke?

If yours is coming up short on the stroke, then it could be long on the down stroke and potentially making contact with the crank. This could be the knocking you said you were getting. This is exactly what happened to my friends B175.

Isn't the 64mm piston the one where you need to get a barrel from a Suzuki? A TS185 jumps to mind.

If 64mm is possible on a Bantam barrel, it would rule out any further rebores. Yours has already had one rebore but has 2 more to go on the standard barrel if you went the normal route of +40 and +60.