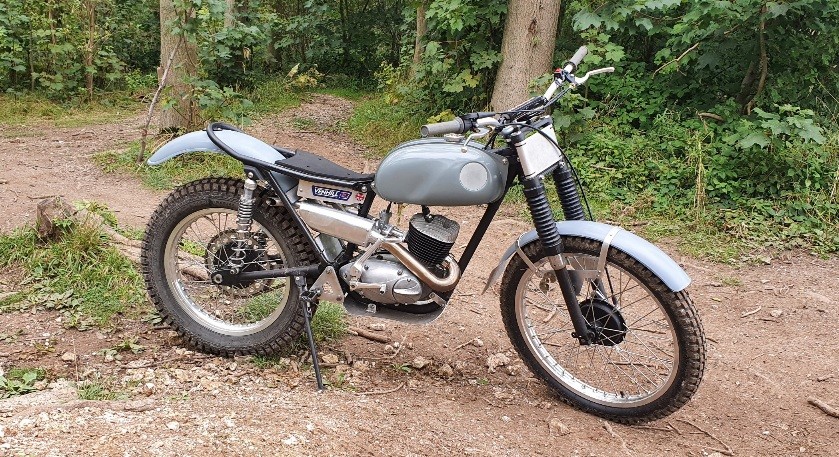 I'm new to the forum having just built a D14 trials bike and come for the wealth of knowledge I have seen on here. I have read all the posts relating to pinking but cannot find my answer.

My buke starts perfectly and runs well but around 1/4 to 1/2 throttle it pinks badly and can't seem to cure it.

So far I have richened up the pilot, needle and main jets which have not helped and also tried a 1.5mm head gasket again no help so put another 1mm gasket ontop of that and that didn't work. Checked for air leaks and nothing found.

Been trying to find the answer for the last 6 weeks and trying different things so now I'm stuck.

HI Mark and welcome to the Forum. Hopefully someone can help you out, although it already sounds as if you've had a good stab at it.

Maybe try running it with the timing retarded slightly.

Thanks Wolf, I knew there was something I forgot to mention.

Tried retarding the ignition bit by bit to the point it wouldn't start it made little difference.

have you got a matched set up of piston and cylinder head ?

D14 should be domed piston with a squish band head which should have long reach spark plug.

D7 should be flat top piston with flat faced head which should have short reach spark plug.

If you run a D14 domed piston with a D7 head then I understand that you end up with a very high compression ratio which would not help your problem and not be ideal for trials riding either.

I am sure that you are aware that there are several Bantam trials riders in your area, Poachers Club, who could advise you from a closer distance.

Hi Mark. Good luck with the bike. It looks great; and it's good to see that there's another Bantamite in the Louth area. Ken.

Hopefully the following verbose ramblings are of some use;

My D14 road bike pinks more in hot weather & also when I'm down to my last half gallon in the tank. I've gone up to a 30 pilot jet and down to a two & a half slide, both of these helped; marginally. I have also started to run the bike on a 20/1 mix (from a 30/1) perhaps the extra oil reduces the piston slap? The bike did have a home made "performance" air filter, I've reverted to the standard set up with an element from an 850 mini, this again helped reduce pinking, but did reduce performance! Regarding carburation; the bike was running a 376 monoblock & it didn't pink, but that carb was so badlly worn I couldn't get the bike to tick over slowly. A 2nd hand concentric was purchased, the needle & needle jet were so worn I was only getting 50MPG & it was eating plugs, BUT it didn't pink!

The poor bike started pinking really badly a few weeks ago and lost performance, the pinking was so bad I thought the bike was going to suffer a terminal mechanical failure, investigation revealed a small crack near the heal of the points, which I can only presume caused the timing to become erratic.

I sometimes ride an old 200 Majesty in Red Rose Classic Trials, it seems to me that most trials Bantams pink.....some so badly it makes me cringe.

As a P.S. my bike came with a D7 barrel, piston, carb & exhaust & it run lovely and smooth & didn't pink..... was flat out at 50MPH....but would go flat out all day! Since it's been gradually put back to D14 specification it's gained power & lost smoothnes.

PPS All of my old vehicles (some of which I've owned for over 25 years) are now running on richer than standard settings, & with less ignition advance. It must be because of the modern fuel.

I suspect that the extra drilling in the 4 stroke type jet would allow more fuel to flow at lower throttle openings, especially before the needle is operating on the narrower part of the taper.

They also increased the slide cutaway from a 3 to a 3 1/2, which would allow more air to flow at lower throttle openings, this was probably done to match the increase in flow through the extra drillings in the needle jet.

BSA must have had good reasons for fitting the 4 stroke jet and needle. I don't know whether such a change would help those with pinking problems but its probably worth considering.

Here is a bit of info on the differences between the 2 and 4 stroke concentric. ** Please log in to view **.

First question, are you sure it is pinking? Other problems can sound like pinking: bit of piston slap, little end wear, blow in head gasket ( I had this with a D7 in the 70’s).

things to check if it is pinking:

is the engine clean - any carbon in the combustion chamber? Then check timing - with modern fuels the engines seem to run better with a bit of retardation. Correct oil petrol ratio - too much oil will give a weak mixture.

good luck in sorting it out.

wildun said
have you got a matched set up of piston and cylinder head ?

D14 should be domed piston with a squish band head which should have long reach spark plug.

D7 should be flat top piston with flat faced head which should have short reach spark plug.

If you run a D14 domed piston with a D7 head then I understand that you end up with a very high compression ratio which would not help your problem and not be ideal for trials riding either.

I am sure that you are aware that there are several Bantam trials riders in your area, Poachers Club, who could advise you from a closer distance.

I plan to go to the Poachers at some point but probably when some restrictions have been lifted and we can spectate again.

Thanks you guys those suggestions are very helpful.

I run it on 40/1 good quality oil so will try a bit more oil see if that does anything.

Thats very interesting about Bantams pinking perhaps I need to use it a bit.

Was running a 3 slide 160 main and 25 pilot but today have gone to a 60 pilot to see what would happen and seems to run better than before with screw 1 turn out but can't help thinking thats far too big a jet. Still pinks but not as much. May try a 2.5 slide see if that helps

Am I sure its pinking? Well no not really seems to sound like it little end is good and new, head gasket doesn't appear to be leaking and there wasn't any signs of piston slap when I had the barrel off to check gasket. But would it show that soon?

Engine is clean and no carbon build up yet.