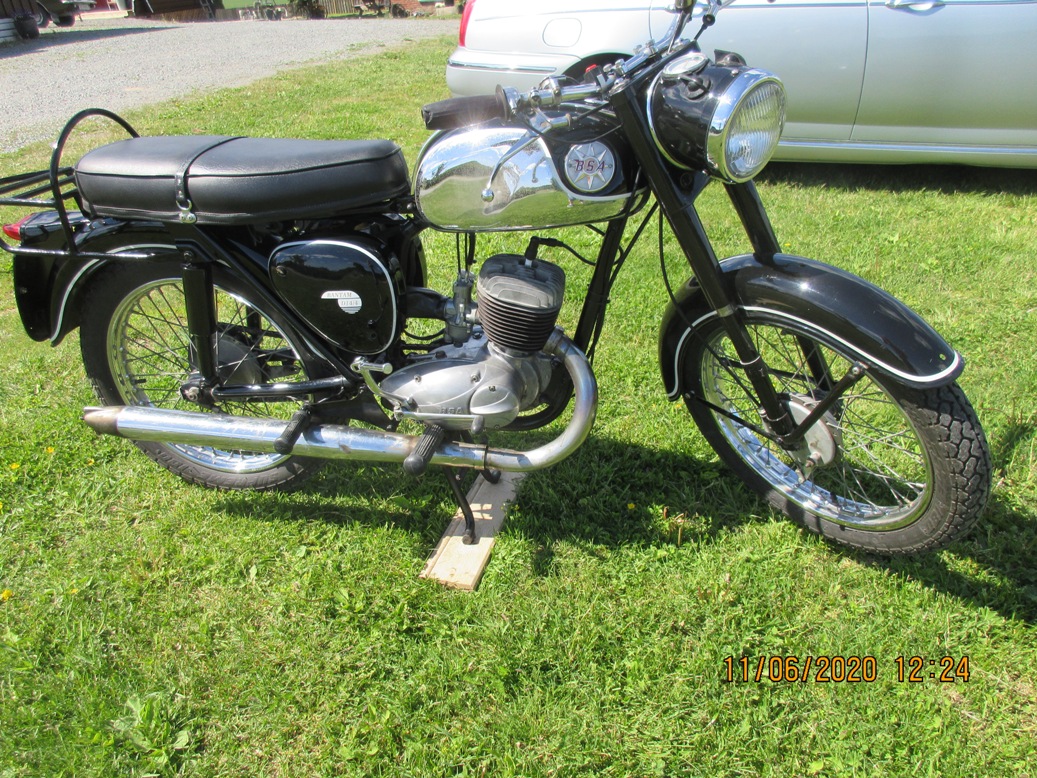 Opps, text fell out on previous reply. This is head that`s used on the bike, find no casting numbers on it! It has straight plug hole, chamber dept measure were 18.54mm according to owner, but I noticed on picture that feeler gauge used as guide had slipped inside flange, so might be even deeper??

Regarding question about picture of burnt piston, it can bee seen earlier in tread, all pistons used have similar "damages" !

The barrel / Cyl marked "M" that were on engine when purchased but damaged beyond repair has "dowel" hole.

NOW to the big question, would the "L" marked barrel make a possible driveable running engine together with the top above, adding a 1.5mm head gasket, adding new rings and cleaning up piston AND remove those sharp port edges. Is it worth a try?

Roarn said
NOW to the big question, would the "L" marked barrel make a possible driveable running engine together with the top above, adding a 1.5mm head gasket, adding new rings and cleaning up piston AND remove those sharp port edges. Is it worth a try?

I`d say it is worth a go, but measure bore in several paces and compare. Cross-hatch hone bore. Check ring end-gaps. New rings.

Don`t overdo the radiusing of the ports, just a gentle lead into the bore(not rounded-off), for the rings to glide over without getting chopped up.

One thing though, from looking at the top pic...do the cylinder transfer ports match the crankcase cutaways?! Use engineer`s blue or similar and cereal box cardboard etc, to mark from both and compare to see if a gasket will seal at that joint.

If after all the mods and settings being correct, it still nips up(seizes), then my suggestion that a thin cylinder can distort when hot, could ring true. Hopefully all will go well though eh.

If I can find my spare standard B175 cylinder head, I will measure it. One fitted to my D7 also.

I'm all mixed up now as to what mixture of components you are using. D7 barrel and B175 head with big bore piston? - think I'll sit back and watch.

New piston rings and 1.5mm head gasket (s) on its way from RCR - should be here in a week. Then engine will be carefully put back together following all advice given here, step by step,,, and hopefully it might work now!

At least we understand what has been the problem all the time!

Will update on the further progress!

New piston rings and 1.5mm head gasket (s) on its way from RCR - should be here in a week. Then engine will be carefully put back together following all advice given here, step by step,,, and hopefully it might work now!

At least we understand what has been the problem all the time!

Will update on the further progress!

Don`t forget to check the base gasket situation as I suggested...because the transfer ports at the bottom of the barrel look as if they may have been worked upon. You can do this by making a makeshift gasket that follows shape of bottom of the barrel. Then drop this over the studs onto the crankcase mouth to compare. This will show any discrepancies between the transfer cutaways....which could lead to air leaks.

With a stripped engine it is easy to blend the transfer cutaways...I bolt barrel to bare crankcases, remove studs from one side to access and blend the ports on other side, then bolt it back together and remove the opposing side and do the same. I`m giving you this info only because of the modifications I noticed to the ports, not to suggest you tune the engine.

Check carb flange where it bolts to inlet, that it is flat...ie not warped and drawing in air.

A update on this story, hopefully finale one!

After getting all parts, follow all advices (radius ports i.e.) we started to put this engine back together only then realizing that the max bored (and modified/ ported) barrel were modified beyond use (outlet port were ported so big that piston - on top - did no close outlet port - left a 3 mm gap,,,)

Just stepped back (3 steps,,,), source a origin standard size used B175 barrel in good condition, another RCR piston +020 sourced, barrel bored, every step followed when put together at finale assembly.  It was just started and driven gently, carefully, around his home just standing at idle, then low revs around on small local roads.

BUT as it`s owner is very unwilling to take advice,,. apparently 100km of carefull driving (after a while) included a 15km drive on main road at 50m/h(80km/h) speed, and in warm weather at the end of this loop he meet a steep uphill,, just 100m but followed of a 500m long sligggghht upwards before bending downwards again,, and of course when it turned downwards it started to make the "will size sound" again,,,

He stopped it, let it cool down and drove home the last 2-3 km. Later in the evening when colder weather, it then could be driven around in various terrain and much longer hills without any signs of suffering! The following day he inspected barrel/piston and found some tiny tiny size marks in barrel, took it back to the man who bored it and they decided to just take a slight cut on the bore (just fresh the surface) and then honed it!

After that it is just driven carefully and taking it over time - no long trips - and show no signs of sizing. It has always been running smooth after this rebuild, and is a very strong driver

That sounds hopeful - and is a good lesson! Modern bikes are built to close specifications so that they only need a little bedding in, whereas the old Bantam (and any of it's contemporaries) needed careful running in for several hundred miles before they could be used to their full.