I have been riding my Bantam D10 sports after a rebuild. Problem was that I couldn't get 4 gears. I thought, "I've made an error during reassembly, only solution is to disassemble and check it out." So here I am with the gear box exposed in front of me. I now find the gear box is changing much smoother and I am getting all four gears. I haven't done anything to fix it. So I think the problem is only apparent after the cranks are together.

Any ideas why this might be? Could the gear change spring be too weak? See picture. Is the gap between the gear level and kickstart splines OK. See picture.

I have turned the mainshaft using the clutch basket in all gears and each gear works to drive the output shaft.. and neutral works too.

Yes it is puzzling. 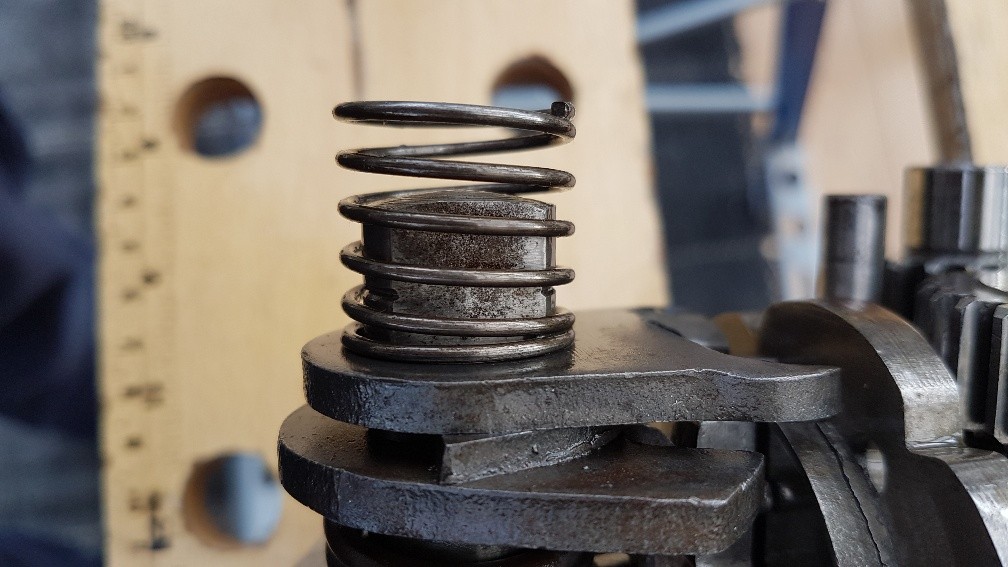 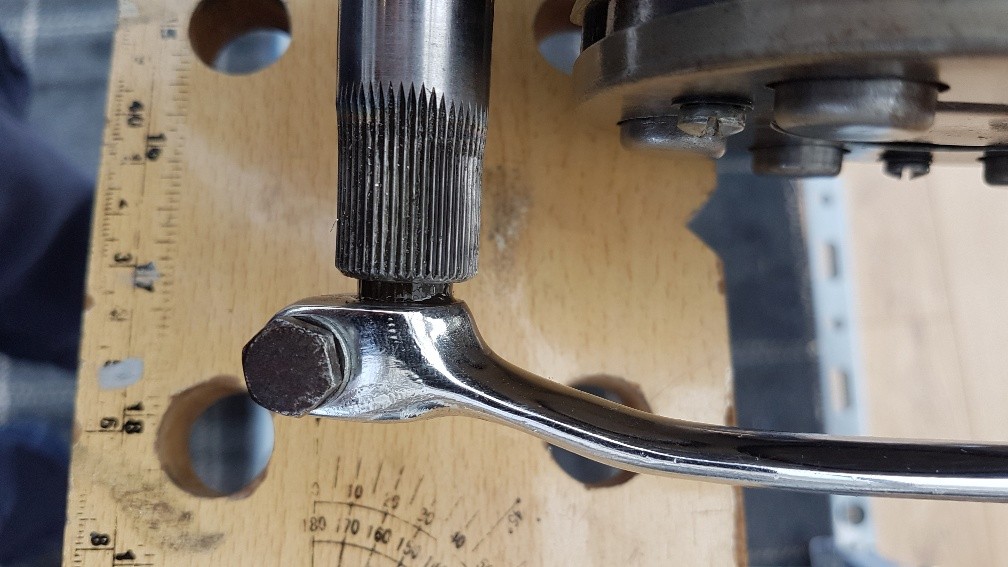 Could be a slight misalignment when you put the case halves together. Have you got the locating dowels properly fitted? Or a bearing, or bush could be not quite seated, causing a problem when under tension. You could try putting it together and tightening the screws progressively to see when it starts to give trouble.

Funnily(!?) enough I’ve just had the exact same problem. All back together, it started but no top gear. I did replace the layshaft bushes so maybe they’re tight? When I summon the energy it’s engine out time again.

What did the rebuild consist of?

I rebuilt my D14 a couple of years ago; new bearings and seals, reborn, replacing other worn bits such as clutch plates primary chain etc. First ride out and 4 th gear kept jumping out. Ended up stripping the engine again and buying a new sliding pinion and having the output gear being rebushed which sorted it out. Funny that I had no trouble with the gearbox before the rebuild!

I have got the gears running through 1st to 4th now but not consistently. Moving from 3rd to 4th or 4th to 3rd results in the cam sometimes sticking midway between the two gears. Trying to move the gear lever further up to click into the 4th cam slot Is impossible but if I drop down partially and up agian it travels to the 4th cam. This is driving me mad. I keep thinking maybe it will be OK when the engine is running. But I don't want to reassemble the bike again until I am sure everything is OK. I'm thinking could it be the gear lever return spring?

Any advice to point me in the right direction?

The gearchange requires a good 'positive movement to take you through the dead points, easy enough on the move but more difficult static. I find that it is better to rotate the output pinion whilst moving the lever through the gears, rather than through an unmoving box (not easy to describe though...)

Hi Colin, I had much the same trouble awhile back, rightly or wrongly I changed to a straight 30 oil which I found improved it slightly but still occurs from time to time, and also found a much cleaner change 3rd to 4th without the clutch, hope it works for you !

Thanks for all the inputs everyone. I guess I am expecting too much and hoping for a silver bullet that will give me a slick gear change. Surprisingly the more I mess with the gears the better things seem to get. So I'll reassemble and hope for the best.

I have stripped the gears out to look at all the components. I found some corrosion and tight spots on the selector shaft and have fitted a clean one. However, I decided to replace the indent spring and ball bearing while I was at it. The replacement bearing is .375" but the one that was in the gearbox was .312". The engine is a D10A 4 speed for my D10 Sports.

I have a B175 engine in bits as well and I see its bearing is .375". The cams are identical. Anyone know if I can safely fit the new .375" ball bearing? Or why the D10 sports engine should have a smaller ball bearing?

Colin1 said
I have got the gears running through 1st to 4th now but not consistently. Moving from 3rd to 4th or 4th to 3rd results in the cam sometimes sticking midway between the two gears. Trying to move the gear lever further up to click into the 4th cam slot Is impossible but if I drop down partially and up agian it travels to the 4th cam. This is driving me mad. I keep thinking maybe it will be OK when the engine is running. But I don't want to reassemble the bike again until I am sure everything is OK. I'm thinking could it be the gear lever return spring?

Any advice to point me in the right direction?

Have recently rebuilt mine and had exactly the same issue trying it static. I was convinced I had rebuilt it correctly and had been able to get all gears fully engaged before the cases went back together. I did find that turning the output sprocket whilst changing gears improved things. Have now had the engine running and the gears all engage fully and repeatedly.

I think I finally have fixed my gearbox and on the bench the gears are changing smoothly. I think the main cause has been the return gear change spring. I have discovered that one leg of the spring is too long and rubbing on the selector cam. Now and again it catches in a hole in the back of the cam. I have fitted another spring from my box of bits and this allows a clearance between the spring and the cam. I'll post a picture of the spring later.

So the problem could have been due to all three of the faults I have found. 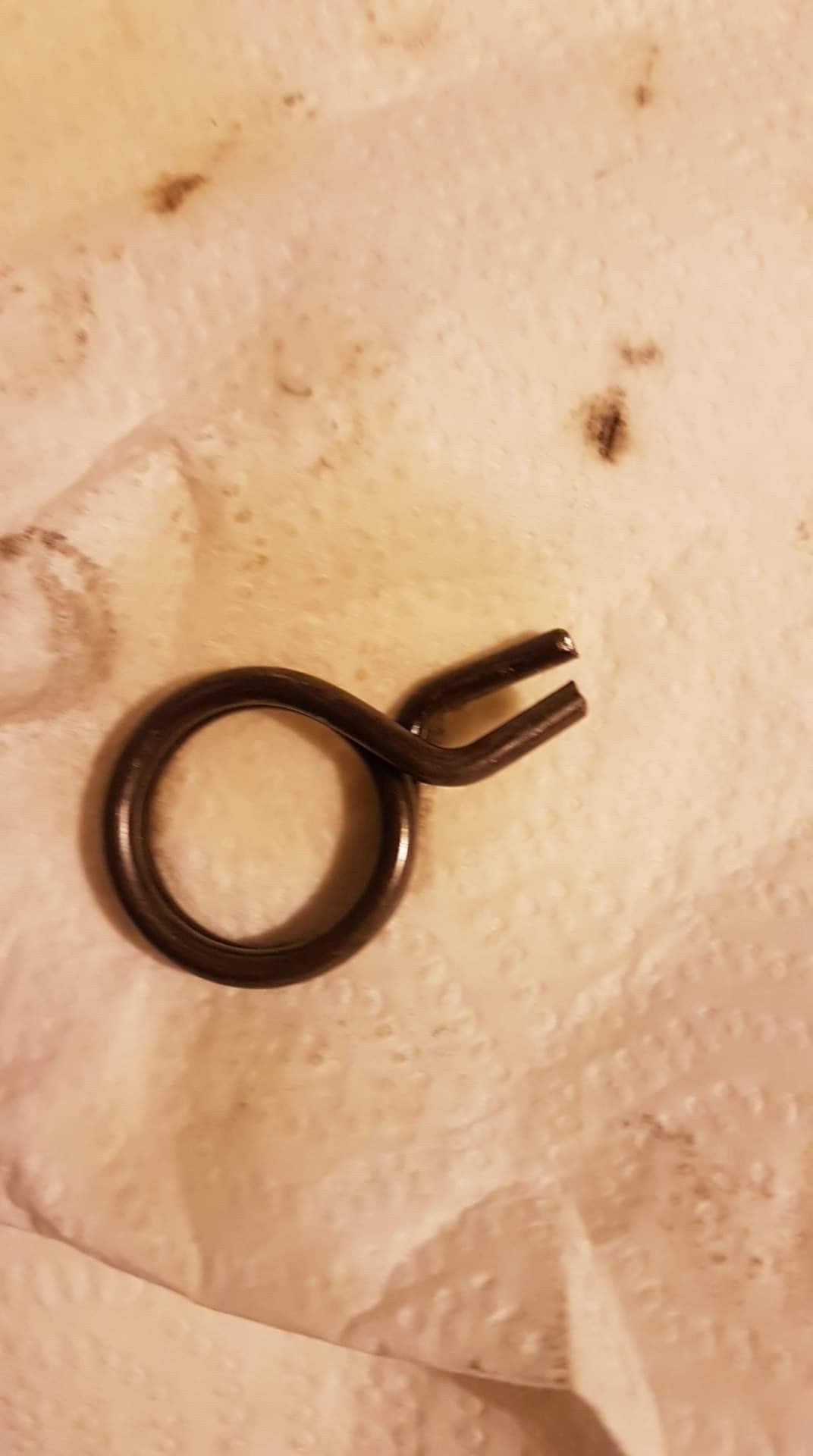 Thanks everyone for your help.

Well I finally plucked up courage and took the engine out of my bike too.  To recap it ran but fourth gear was (mostly) absent.  When I got it apart it became clear that the selector claw was not returning to locate properly on the selector cam lugs after third was selected.  After some cogitation I worked out that a gentle down pressure allowed fourth to be selected.

With great advice from another Suffolk Bantamite it turned out that the return spring tangs were angled too much, this meant that the fixed lug forced the spring open and made it (slightly) loose on the lug on the spindle.  I replaced the original spring which has straighter tangs and these grip the spindle lug tightly, giving a small amount of play on the fixed lug.  Problem solved!

Engine back in bike, just the final few bits and bobs to sort then a further test run. (I’ve also upped the oil in the petrol as I’m running in a newly rebored barrel with big bore piston and last time out had a minor seizure).

Thanks Colin for the thread.