Are the pin recesses in the tail light bulb holder parallel, or offset?

If they’re parallel, it’s designed for a single filament bulb, with the feed through one pin and the return through the other.

Brand spanking new, but after 70 years?

lbayorkie said
Headlamp bulb is  BPF, not sure about the wattage but assume 25w or so. ...

I am running an S55 rotor  with S55 coils so should have approx 30w. Headlamp 25w and tail light 5w, speedo bulb 1.2w (if I fit one) so the maths tell me I should be there or thereabouts.

Glen, the bulb holder has offset pin slots. As I mentioned this is not the correct lamp for my bike, the correct one is approaching £200 when one comes up on Ebay and that one was designed as a running light only. The Lucas lamp fitted on mine is designed to use a two element bulb as its supposed to have a brake light. The way its been wired is a single live from the light switch and and earth onto the mudguard stay. I didn't realise the pins were offset so I'm not sure how I can be certain of using only the 5w filament now.

Dare I mention LED's. I've got them for headlight 'park' (or 'pilot'); speedo, and tail / brake which is a BAY15D base (lamp is a Lucas pattern L525). It all adds up to a gnat's over 3W (I have just added it up again) including the brake light is on. Headlamp remains as a P36d (24/30). Bear in mind tho I'm converting to battery lighting; battery will be hidden in toolbox and the engine came from a later bike, and includes 3 coils in a 55 generator.

My postman friend did originally suggest I could just power the LED's with the battery and recharge it when I got back home. I then thought it should be possible to make the bike at least attempt recharging whilst being ridden. But I might still have to finish the recharging when I get home! Time will tell.

If you run just the 5w filament in your tail light you should be ok.

So what are you going to do with the brake light? Not have one at all?

I have experimented with LEDs, and they didn’t prove reliable. A quite expensive stop/tail unit lasted 200 yards. I think they require a fairly “clean” DC supply, and that means proper rectification and regulation, and a battery (or capacitor) to make them last. You definitely can’t run them on unregulated AC like you can a filament bulb.

Using LEDs is an option. I could simply add a rectifier/regulator to my current set up but I want to keep as original as possible and in any case I'm not going to be riding at night.

This bike was never fitted with a brake light so I don't believe there is any legal requirement to have one now.

A brake light has been mandatory on new bikes since October 1954, and the retrospective fitting of one to older machines capable of more than 25mph since 55 or 56, although a lot of low performance bikes like early Bantams escaped this if the MoT man was friendly.

My 53 D1 survived until 89 without a brake light, but there was a further revision to the law then that said only bikes under 50cc could continue without one (and, incidentally, from that point both brakes had to operate the light on new bikes, not just the rear). At that point, I had to fit one for my (very) friendly MoT man to issue a pass.

Whether or not you’re considering riding the bike in the dark, whether or not you’re considering getting it MoT’d, riding a bike on 21st century roads without a brake light is foolish in the extreme. Hand signals haven’t been taught to new drivers for decades, and the chances of being rear-ended are very real in today’s high speed, low attention, cosseted environment.

It is an unwholesome fact that a factory standard pre-54 D1 is not legal to ride on the road, and hasn’t been since 55, despite the “grey” areas exploited by many of us for several decades. It’s also a fact that more than three decades after those grey areas were firmly closed by 1989’s legislation, traffic speeds and densities have increased further. Riding my D1 in the 80s was like riding a moped, indeed my Honda C50 performed better in almost every situation, and my C90s were significantly better.

If you intend to take advantage of the MoT exemption to circumvent the need for a brake light, along with the other corners you’ve cut regarding training and licensing, then from this point onwards you’re on your own. I will play no further part in facilitating your path to disaster.

I have ‘always’ been told that a rear brake light isn’t required it it wasn’t fitted as original equipment, and having seen many early post war and  pre-war bikes running without them (including those using acetylene) I assumed the advice I had been given was correct. SO THIS WAS NOT INTENDED AS A SHORTCUT.

My decision to not take the full bike test was a considered one, I dont have limitless funds (I am retired) and my priority was to get the bike working. The cost of a full licence was approaching £1000. By riding on a CBT for a couple of years I should be able to trim back the amount of training I need for a full licence.

All that aside, my determination to sort out the lights was to remain legal. As it now seems a  brake light is mandatory I will have to look into a regulator/rectifier and LED bulbs, the S55 output wouldn’t support normal incandescent bulbs. I’ve no idea how the wiring would ‘work’ or how switches would be fitted to the brakes (particularly the front one) so that’s another challenge!

Incidentally, I ride my bike on quiet country roads and rarely above 30 MPH.

So thanks for the advice you have given in the past and Im sorry you don’t feel able to support me in the future.

Additional stop lamps, over and above the mandatory requirements, must be tested. However, if there is doubt as to whether they are connected, the benefit of this doubt should be given.

So my old 1950s bikes that only have a brake switch on the rear brake should be legal?

So my old 1950s bikes that only have a brake switch on the rear brake should be legal?

the stop lamp comes under the..

A vehicle first used before 1st April 1986 being an agricultural vehicle or a works truck;

The cost of a full licence was approaching £1000.

I'm out of touch!

Whether or not you’re considering riding the bike in the dark, whether or not you’re considering getting it MoT’d, riding a bike on 21st century roads without a brake light is foolish in the extreme. Hand signals haven’t been taught to new drivers for decades, and the chances of being rear-ended are very real in today’s high speed, low attention, cosseted environment.

lbayorkie said
and in any case I'm not going to be riding at night.

I'm going to have everything on for just riding around in daylight! Like all the modern bikes do! Further to the above, I'm sure drivers have become conditioned to expect to see every motorbike with lights on, and especially the headlight, assuming that is they are looking for it at all. Especially a slow bike. I've even got one of them flashing bicycle rear lights and I'm going to be using that too!

The cost of a full licence was approaching £1000.

I'm out of touch!

Yeah theres 2 licence classes aswell now remember paying £50 for as many lessons as it took to pass my test.Sounds like a bargain now.Think a lot of the cost is the hire of the "school bikes".

I can't see any value in contributing further either, this bike has now had hundreds of responses over two topics on it's 'restoration' and the same questions still seem to be asked with no regard to prior responses, not to mention similar questions and responses on other people's D1s. I can only assume that you either ignore what you don't want to hear or can't be bothered to search for similar questions. I do think you would do far better to sell your D1 and look for something like an old moped or perhaps a velosolex in known good condition. A moped will provide performance in a similar ballpark to an early D1, a solex is slower, but 'quirky' and more like a bike.

I accept that I bought a 'Dud' and that combined with my relative lack of engineering knowledge of motorcycles has resulted in one challenge after another. I have had some good advice but the reason why questions have had to be re asked on occasion is that the advice is often contradictory and without a modicum of technical knowledge its hard to know which way to jump. I think maybe I was a little naive thinking a manual and access to the forum would be a substitute for experience of motorcycles.

Maybe the forum needs to address the needs of people in my position who want to run a Bantam. A local mentor who can actually see a bike and give advice would help immeasurably in getting Bantams back on the road and avoid the to-ing and fro-ing that the written word invariably requires.

I am really grateful to members who have provided input and hope some will continue to do so.

I am extremely lucky to have found someone latterly that has agreed to help me and progress is now being made at a rapid rate, so much so that the bike should be finished by the end of the year. 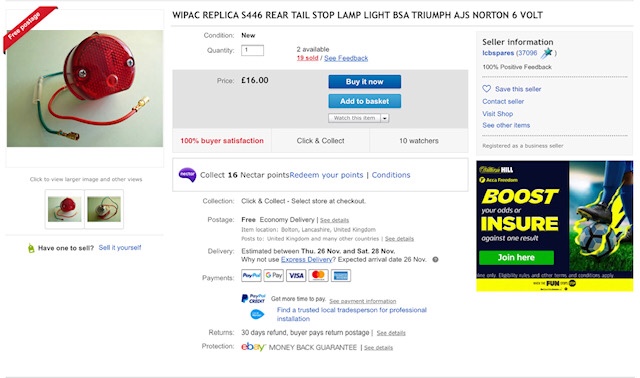 which are cheap and plentiful, both replica and NOS available

note you now need a rear reflector fitted in the centre line of the bike by law anyway as well as a brake light. 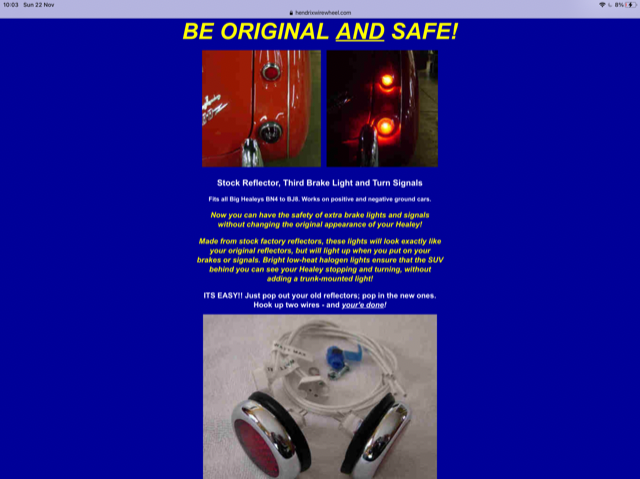 I have enjoyed reading your thread, i have learnt a lot and I have to say , I have had most of the same issues with my bike ‘s as you have with yours, although I am probably better placed as I have spent many years fixing military aircraft from the 50s / 60s and 70s which have had expedient repairs carried out by people who didn’t care how it looked, just that it was made operational. So I am used to researching and returning parts to ‘original spec’

who knew that the frustrations I had when I was 15 with my bantam would come back to haunt me 40 years later.I

Standard joke, ask a question on a forum, get 15 different answers

Yes, I've learned that, and I know they are all trying to help.

Forums are great for bouncing ideas about - based on your restoration blog part one, the frame / bike itself was built post June 1950 so unless it was built using left over parts, the later generator is the correct one to use anyway, which gives you more options 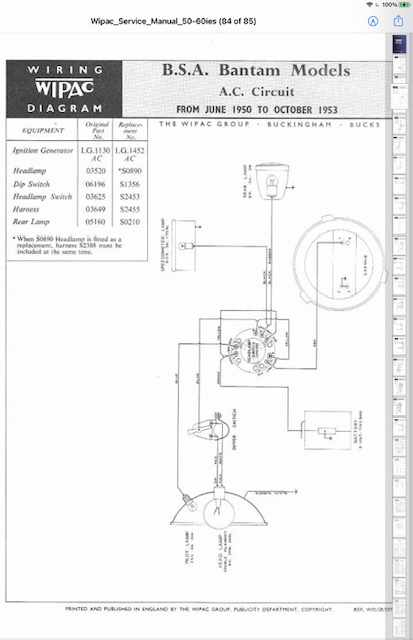