Brace Yourselves! - I've decided now's the time to come clean and reveal my next project.

The reason I kept it under wraps is that I didn’t really want to think about it while I was doing the D5 until I got to the engine stage -you’ll see why in a moment. - That and the fact that you will all probably laugh!

I know the golden rule is don’t buy a bike unless you can see the whole thing and this couldn’t possibly be further away from a whole bike. It has been completely stripped down, frame & engine to the last nut & bolt!

Basically I bought four boxes of bike bits and some tinware. On the plus side it was reasonably cheap, plus there’s probably a few hundred quid’s worth of new bits included as the seller was going to rebuild it so bought them but he never got around to it.

I didn't realise it at the time, but apparently, it is a very rare 1951 D1 Bantam De-Luxe which was the early plunger version with Lucas battery electrics and apparently the only Bantam ever sold with an ignition key.

The frame number YD1S 6163 & Engine number YDL-6800 are on the original buff log book and on the bike as well so it’s got matching numbers.  It does seem very rare, I have looked through this site and searched Google images and I haven’t found another – until yesterday when I saw new member Grubsie also has just posted the same bike although with quite a few bits missing so there’s at least two – each on different continents - maybe we can learn together and at least I have most of the original parts so he'll know what's missing - I think!  If anybody has a complete one or a photo, I'd be interested to see it.

And here’s my photos: 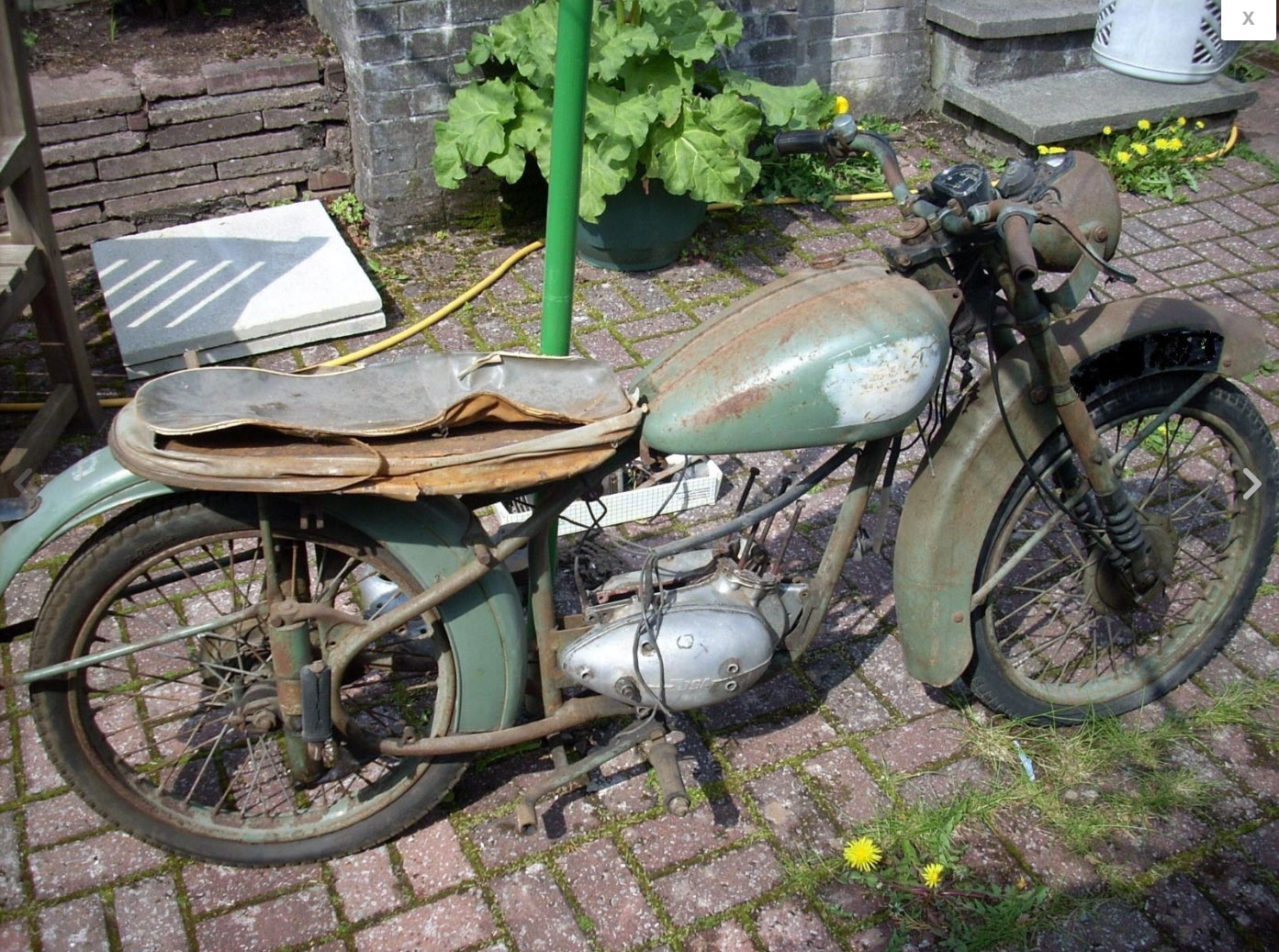 However, this is what I bought – 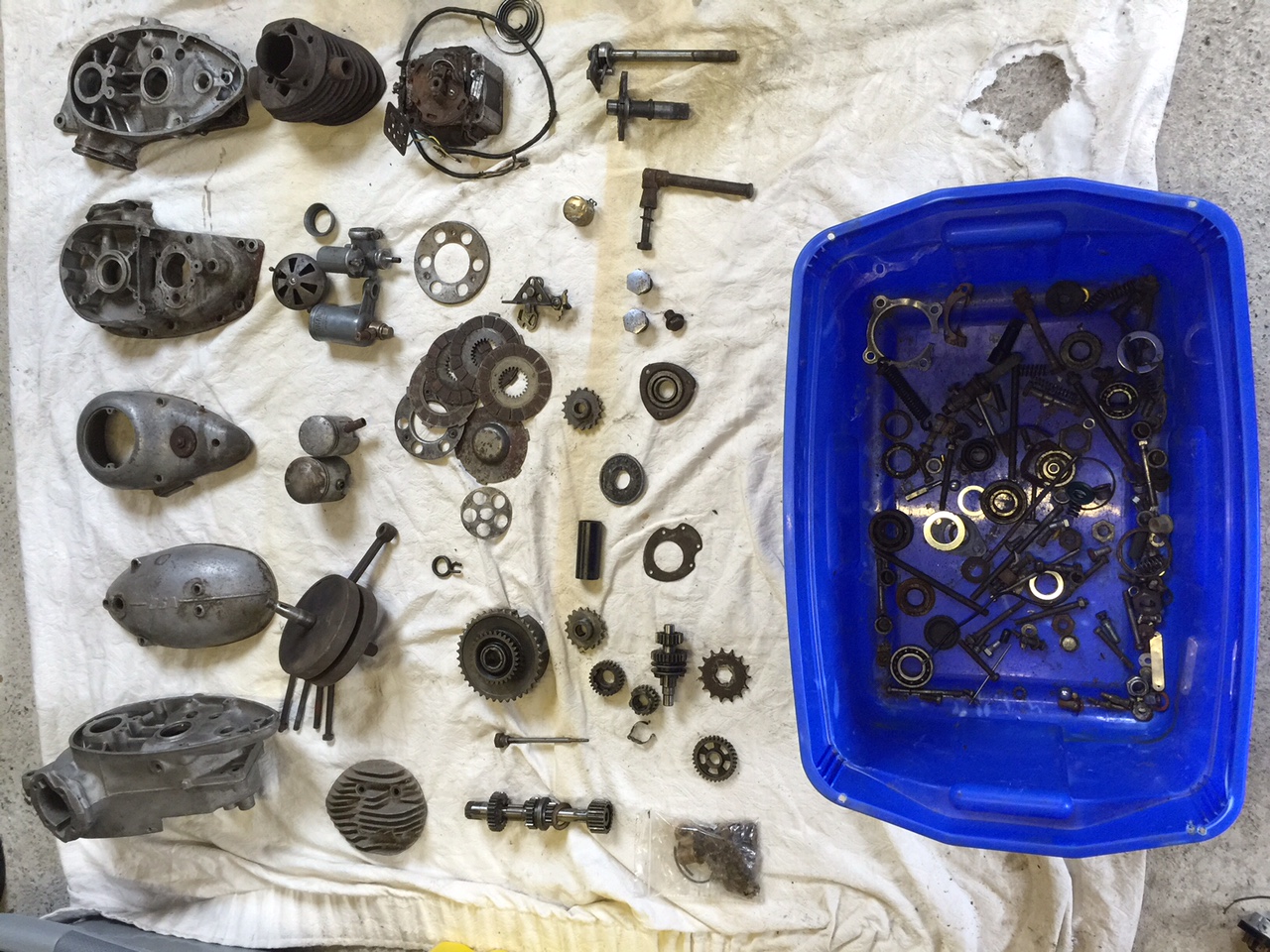 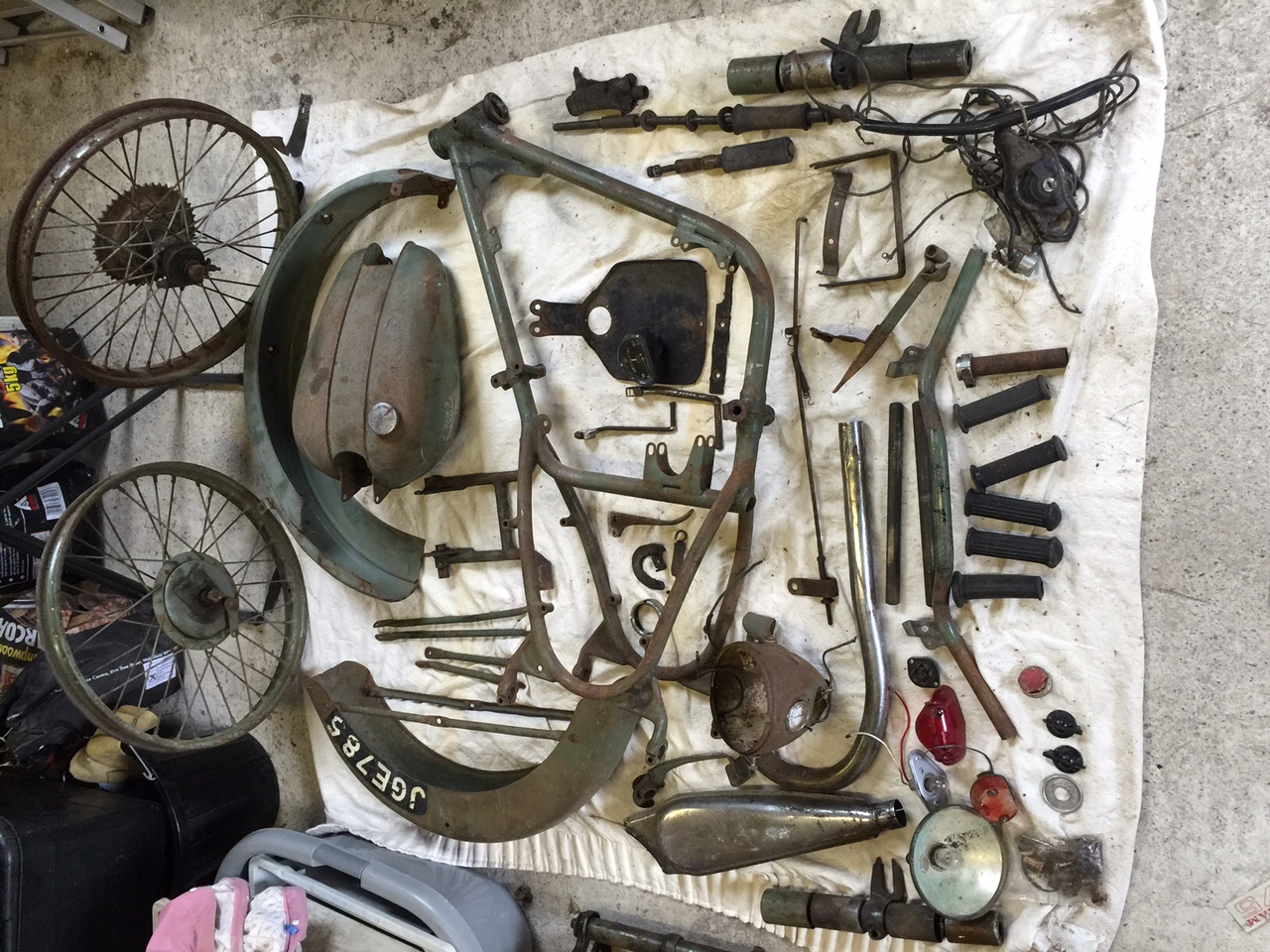 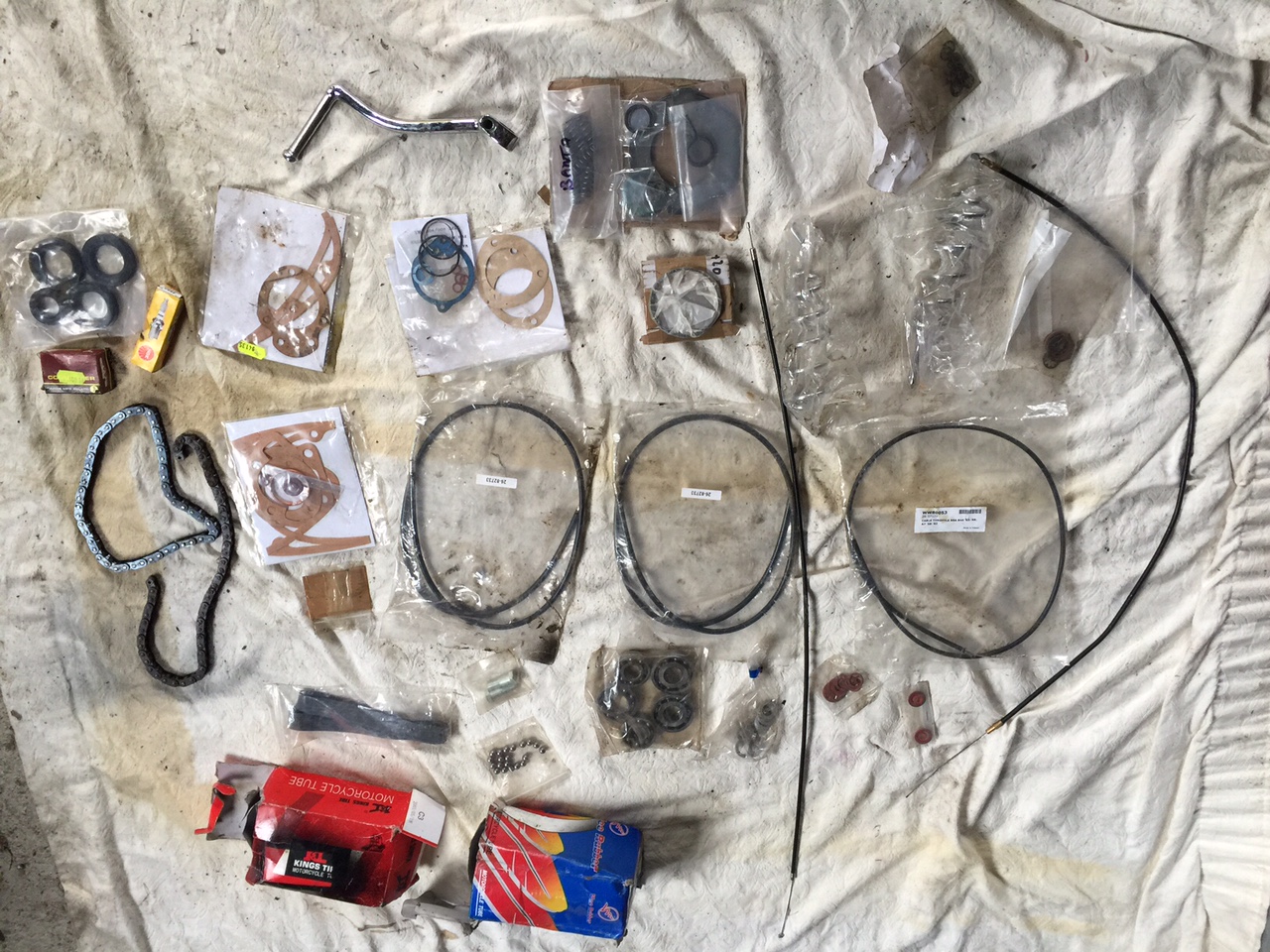 He said that there might be a few extra bits from other projects he had which probably explains the track-rod end!

There were a few more new bits not in the photos and since I took them, I’ve bought a few more so I have a new seat, (single of course) chainguard, luggage rack, rear sprocket wheel. The only obviously missing tinware is the toolbox (which I think should be the two-screw one?) and half of the battery box. I think I might be needing a lot of help with one!

So, the reason I’m starting on it now is that I’ve begun the rebuild of the D5 engine as the winter part of the project (I haven’t a clue what I’m doing by the way so will need some help there as well please) but as, the two engines are pretty similar, I thought that each time I remove a piece from the D5 engine if I hunt for the matching D1 piece in my boxes of bits, I can then sort and label the bits in the boxes, so I am building up two sets of identifiable engine parts that I can then check, replace as necessary and, (fingers crossed) reassemble.

Here’s the clutch bits from the D5 and the matching bits I found in the D1 glory hole! – The bloke I bought it from said he had thrown absolutely nothing away but I’m not 100% convinced. It’s just nuts and bolts I seem to be missing but I’m not that far onto it. 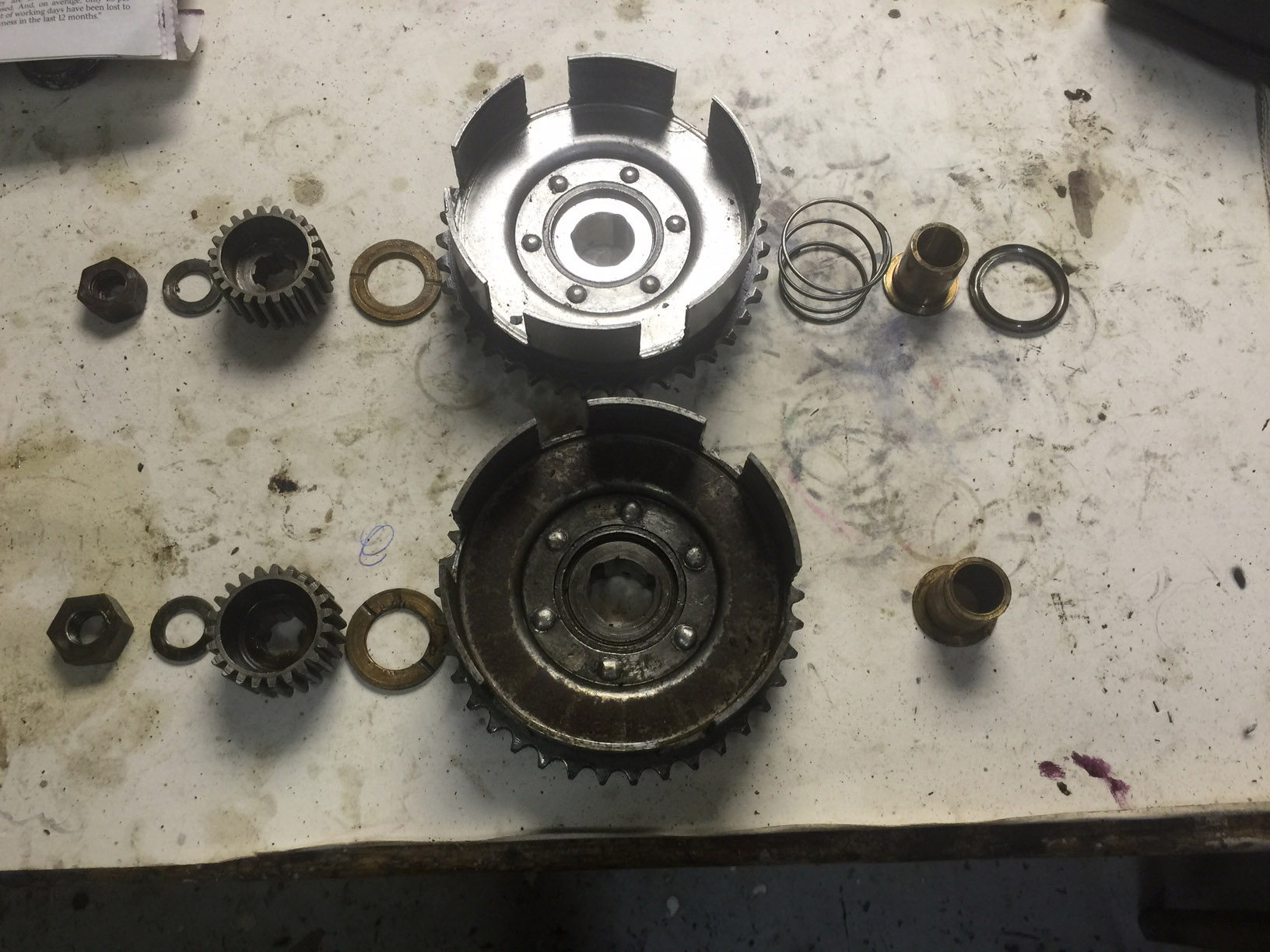 I don't think it's going to be an oily rag job somehow.

Any insights/advice/howls of derision gratefully accepted!

And I thought My D3 was now a mega jig saw puzzle.... Nice one - ought to keep you occupied for a bit LOL.

Try this link for a 1951 deluxe Lucas plunger picture.

I did not think the pic would come up, anyway, here it is. HTH

You certainly pick the rare model bantams bil,if the half of the battery tray that you are missing is the outside part(as in hans photo above)i have a new old stock one here that maybe for sale.....

Good luck with the project bil,i'll be watching..

Thanks Hans, I wonder why it needed the bulb horn. Are you sure it's a De-luxe or did they make different ones?

Jess, I think that is the part I'm missing. I'll have a look tomorrow to make sure but that would be great-thanks for the offer. I'm thinking of stealing your footer and altering it slightly    ......it all started with a shedload of bits......

Kirkbybil said
Thanks Hans, I wonder why it needed the bulb horn. Are you sure it's a De-luxe or did they make different ones?

Looks like your rear guard is of a rigid, All Deluxe models came out as plungers and the front and rear guards in the picture are correct, The clamp on horn is not correct, his horn must have stopped working?

Here is some more info I collected:

Rectifier between battery and toolbox.

Crank not interchangeable with that of standard D1. 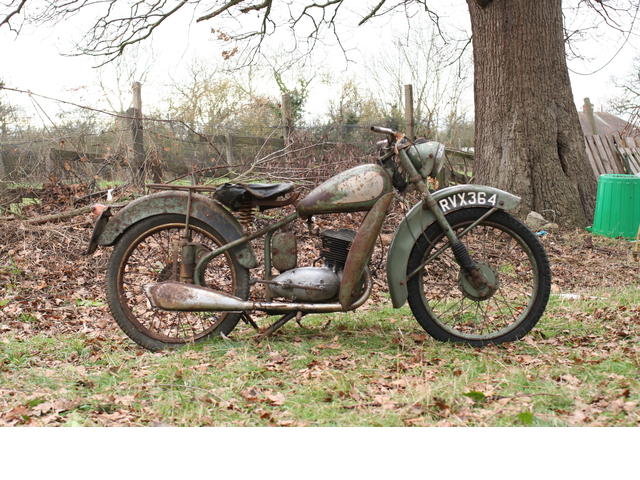 Here is another 51 deluxe

Wow - Thanks Hans, that's all really useful info. It's a shame as I quite liked the rear mudguard but if you look at the second photo, you will see that someone has cut a chunk out of the rear mudguard so I was going to have do some welding or replace it anyway.

Are you 100% sure that is correct though? I'm not doubting you but they sent all sorts of off bits out of the factory.

Thinking about it, maybe someone replaced the original with the one I have for a plunger, and they had to hack that bit out to make it fit for some reason?  I don't have a photo of that side of the bike but maybe it didn't have a recess for the chainguard?

All the d1 rear guards have the recess for the chain guard (the piece cut out on yours) I am sure your guard is for a rigid, If you look at the original brochure it shows the plunger type guard.

But I am not a expert,

I try to get most of my reference from photo's of original Bantams and sales brochures. I do find that export models are sometimes different to the UK models.

The more I look at it the more I notice.

Look at the front of the rear mudguard in the second photo you posted on the 15th, it only comes down as far as the bottom of the toolbox. In the first picture on the 14th it seems to go much lower down.

I'm more confused now, though that's not difficult!  Any thoughts? - I need to find more photos so I'm sure of the correct one as it looks like I'm going to have to buy one.

i did notice you had the wrong rear mudguard on yours bil when you posted up your photo's,your rear mudguards off a rigid,the one in hans first photo is correct for a plunger,his second photo shows someones just cut that one short for some reason.....

Fairly sure that bike is 'Bernard', belongs to Member B.S. Hey/Spike.

There are other Bantam deluxe Lucas owners on the Forum and in the Club if you search.

I've had another look on Google images as I thought mine had the correct mudguards so that's what I was looking for.

Still not many Deluxe ones though and both I did find have different front mudguards as well: 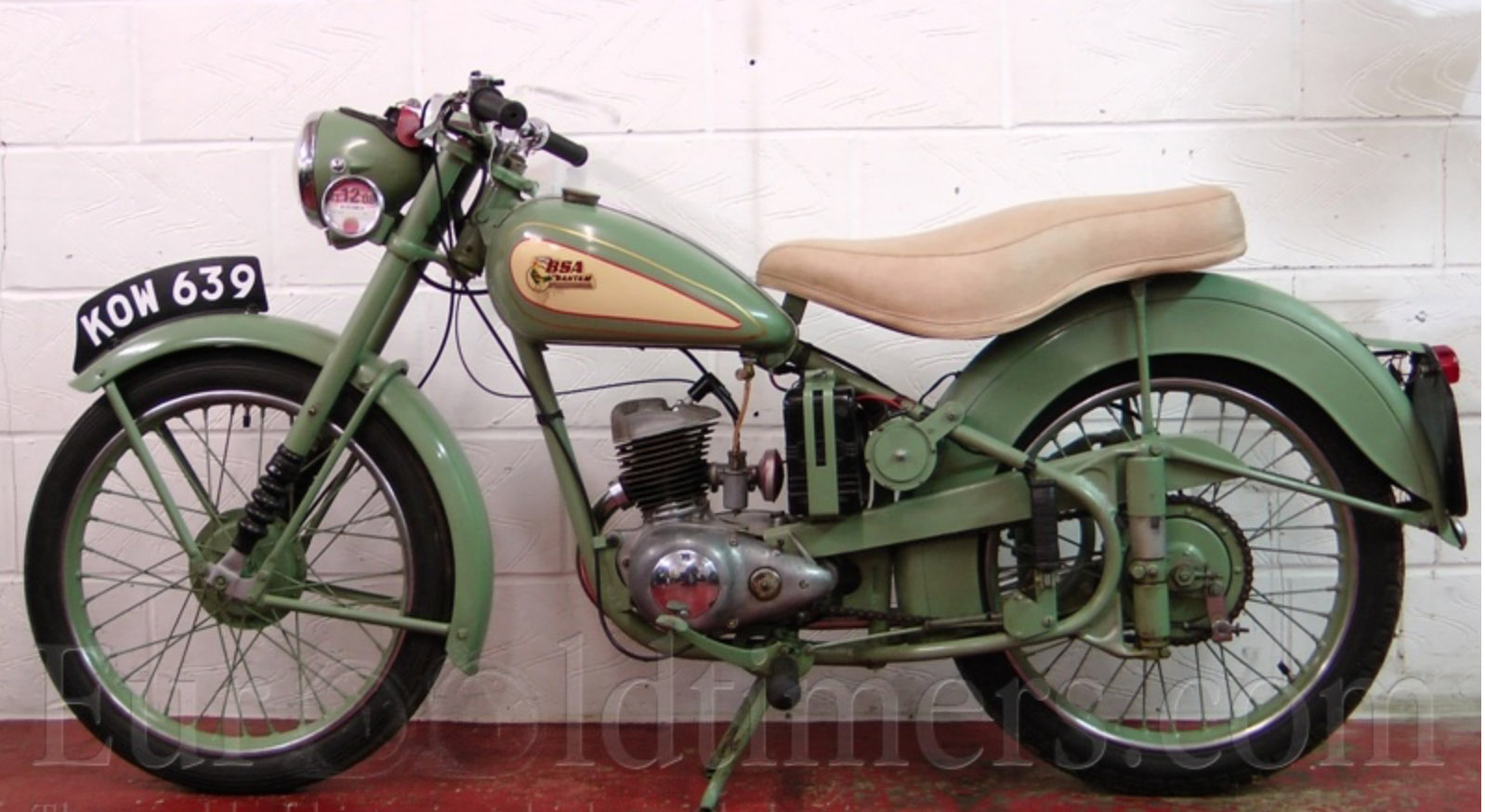 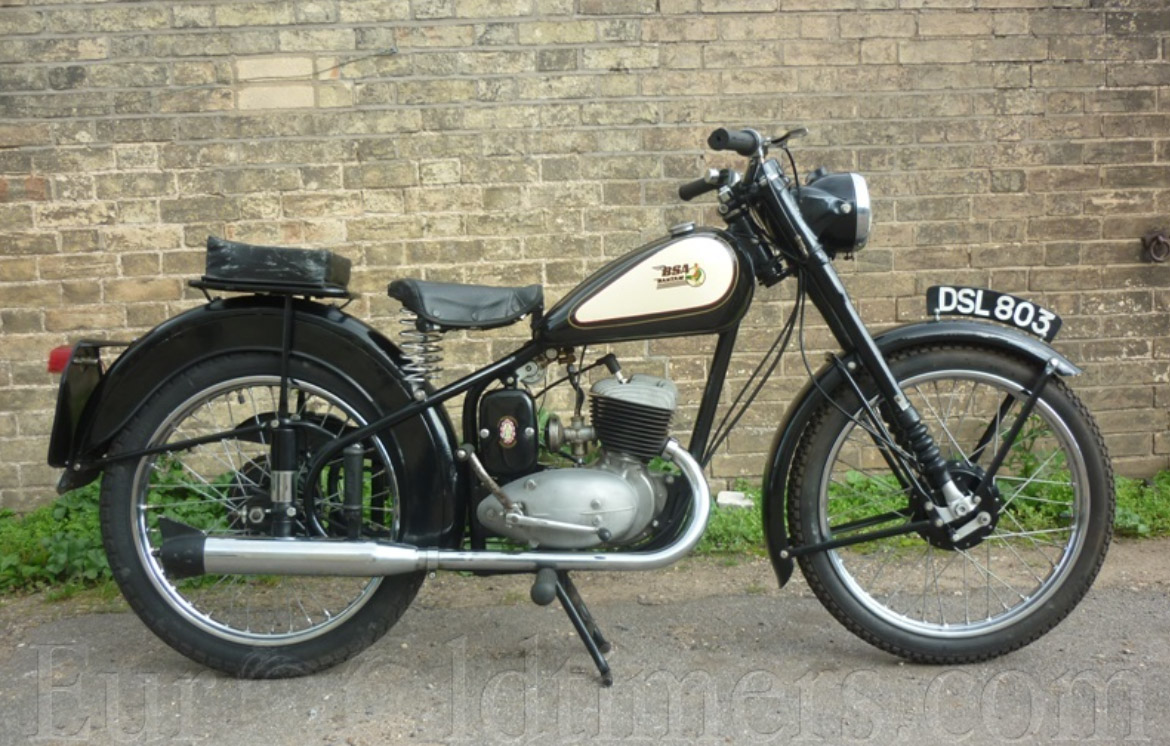 Do you think my front mudguard is wrong as well or is the shovel one correct?

Do you think my front mudguard is wrong as well or is the shovel one correct?

Your shovel front guard is correct for 1951.

The guard without the valence in your 2 last pictures were introduced midway in 1952, Your front guard is definitely correct.

Your bike was originally registered in Glasgow.

Good luck with the build.

Thanks Everyone. If you spot anything else wrong please let me know. As I said, engine first as I'm doing the D5's so I probably won't start on the tin until next year although I will keep a lookout for a two-screw toolbox and post for one on 'Wanted'.

I'm sure I'll have lots of engine questions in the meantime.

...and yes, first registered in Glasgow, according to the buff logbook it has had 6 owners,all in Lanarkshire, and was last registered in 1964 so presumably it's been off the road for around 50 years! It's never had a modern log book.

I confirmed with DVLA that the reg no has not been re-used so I should be able to claim it back but apparently I can't do that without the dating certificate and I can't get that without sending photos of the complete bike so hopefully it will not be reused before I get there.

When I did my D1 i also only had the buff log book. you don't need a dating cert . 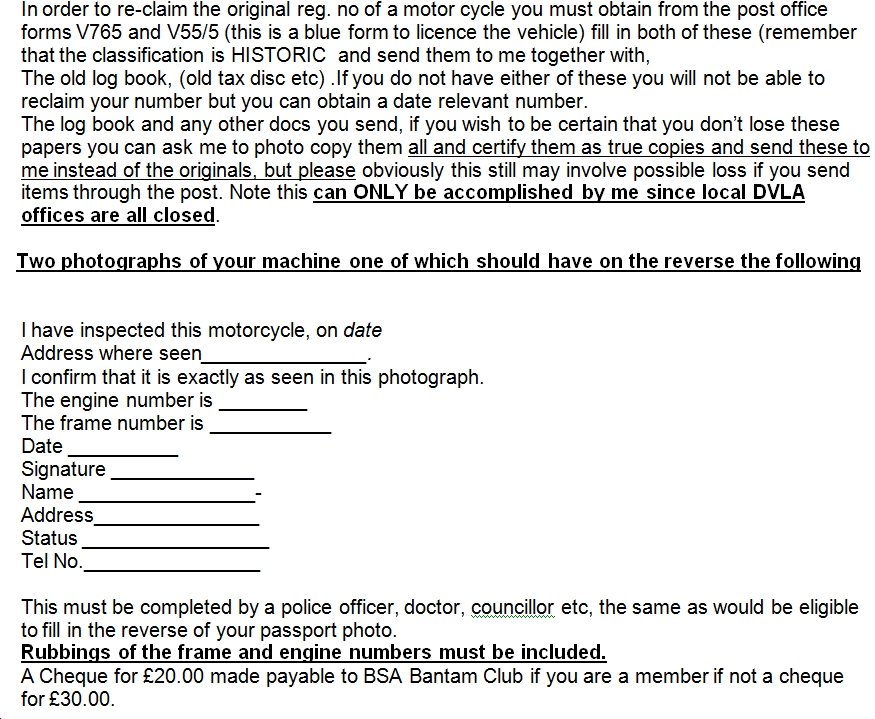 The problem is that I need two photos and, apart from the one taken years ago, I only have photos of some bits, not the whole bike (hence the blu-tack/gaffer tape) unless a photo of the bits would be sufficient?

I have finished stripping the D5 engine and I've been identifying the same parts in the D1 boxes and bagging them up, and most are there and in better condition than the D5.  In the photo the D5 is on the left, the D1 on the right.

When I got the D1 it came with an extra set of crankcases and now I have found out why. Whoever stripped it down must've used a screwdriver to break the engine open. I was determined to use the originals so everything matched. However, not only are the faces damaged but the right hand case is actually bent so it rocks on the bench on what should be the flat face so it's obviously a throw away.

The original engine number in the log book is YDL6800, the other one I have has YDL8433. Assuming theres no technical difference between them, which I don't think there is, is there any downside to swapping cases? Should I find a way to restamp the original number? is it even possible? does it matter? does it affect value? am I worried over nothing?

What do people think? 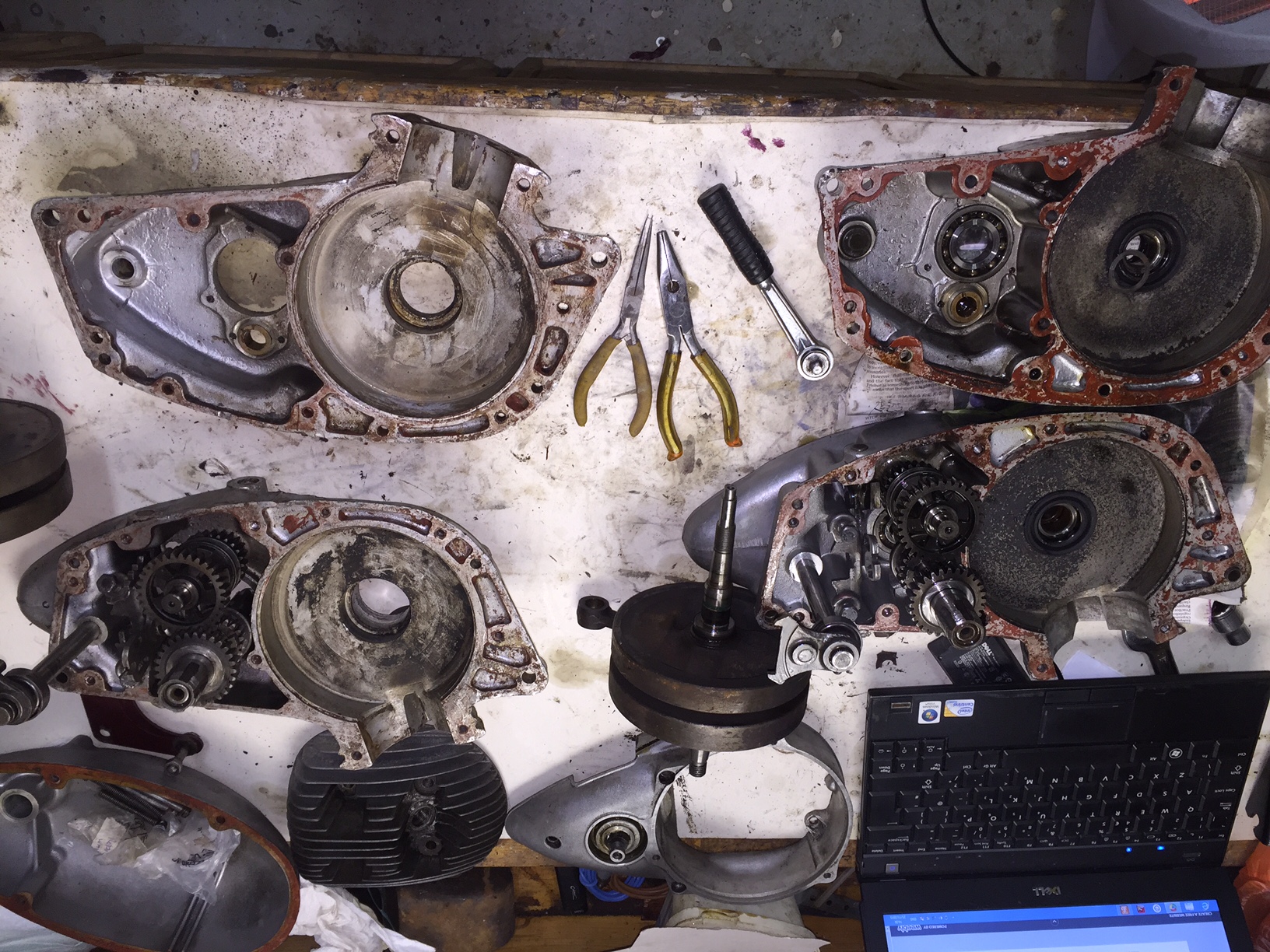