Alan, slacken your adjusters both right off, push wheel forward even-stevens in the rear-end, making sure your tyre-to-guard issues don`t crop up again. If all looks good, nothing fouling, wrap your chain around the rear sprox, pulling the chain run top and bottom and you`ll see if there`s enough to remove a whole link. Half links were available back in the day....may still be? then you just need a chain splitter, if you were next door you could borrow my vintage kit, but they`re cheap enough nowadays....

Thanks for the reassurance.

I think it must be gearbox oil, just why its coming out of the top of the crankcase I have no idea. All I can think is theres too much oil in there.

When you mention carb tickler do you mean dripping fuel could have dissolved the original sealant?

Is there a fuel resistant sealant you to recommend please?

So, if the chain adjusters are at the end of their travel and I have a 116 link chain the something must be wrong elsewhere.

I wonder if its anything to do with the rear chainwheel/sprocket. Although its a Rigid frame the rear wheel is from a plunger, possible the plunger had less teeth on the chainwheel, thus making the chain slacker.

By the way the chain is like new, no wear.

I would imagine that most Bantams by now have had various second hand parts fitted to them during their life time. That may be wheels, sprockets, swing arm, engine etc etc. Some of which may have had an affect on the chain adjustment. If the chain you have is in good order, and the sprockets and everything else are good, line up etc, then I would remove a link from the chain.

Seeing you`ve had it running, we`ll put "gearbox pressurisation due to leaking crankcase from the flywheel area", on the back-burner, and assume it`s just centrifugal force flinging oil off the gears and some`s finding its way through a gap at the top of the crankcases.

Yes petrol is a solvent and will attack certain sealants. I chop and change between sealants, some silicone ones are not petrol resistant, but a good one will hopefully do the job...it should state fuel-resistant on the tube.I`ll check the tubes I have later today and get back to you. I knew a top IOM TT engine tuner(Robin Church) from the 2-stroke era, he did some carb mods for a road bike for me, he went through a port into a water jacket and he repaired it with Araldite! Modified 350LC clocked at 160mph, the Araldite held well against water pressure and fuel.

Worth checking your gearbox oil level and also have a sniff of it to see if any petroil mix has found its way through the join between engine and gearbox to dilute the oil. Probably unlikely because by the same token, the engine could be drawing in gearbox oil and burning it via such a badly sealing joint....but I`ve seen some odd things with Bantams, so anything is possible.

You may find a clue in the colour of the oil.

I have a similar problem with one of mine, clean oil bubbles out from the crankcase joint just behind the barrel. In my case I know its from the petroil mixture as it is coloured red. The bike doesn't want to rev up properly so I am assuming there is a problem there that may be causing it. I won't know for sure until I strip it.

I think I just found out why you are having problems. This is taken from a recent (2012) Renold catalogue.

I've highlighted the chain type originally fitted to Bantams using standard sprockets and it's not 08B!

What do the 'dashes' mean?

Could this be a chain for a plunger then?

Why would the oil turn red when mixed with the petrol, are you using a red coloured 2 stroke oil?

Exhaust didn't seem too smokey but not sure I would be able to tell the difference. Cetainly not pushing out clouds of smoke and didn't smell oily.

lbayorkie said
But mines a rigid so according to chart 116 is correct. Could it be shortened without causing problems elsewhere?

Sorry for the mix-up there. A simple way to test for a worn chain, back in the day, was to take it off, lay it flat on it's side on a flat surface, hold one end in position and push the other end to form an arc. The deeper the arc, the more worn the chain.

Piquet said
I think I just found out why you are having problems. This is taken from a recent Renold catalogue.
I've highlighted the chain type originally fitted to Bantams using standard sprockets and it's not 08B!

Most self mixing two stroke oil is coloured, mine happens to be red, and although it is mixed with petrol in the tank, some of it separates out during use in the engine, otherwise it couldn't do it's job.

When you strip a Bantam engine that has been running on a proper petroil mixture, you will find that the crank, bearings, flywheels and the crankcase interior should all be coated in oil.

But it may explain why he was finding it difficult to obtain a split link.

I just found the latest catalogue from Renold (2014) and it appears they no longer list 110044 just something called GY08B1NA! 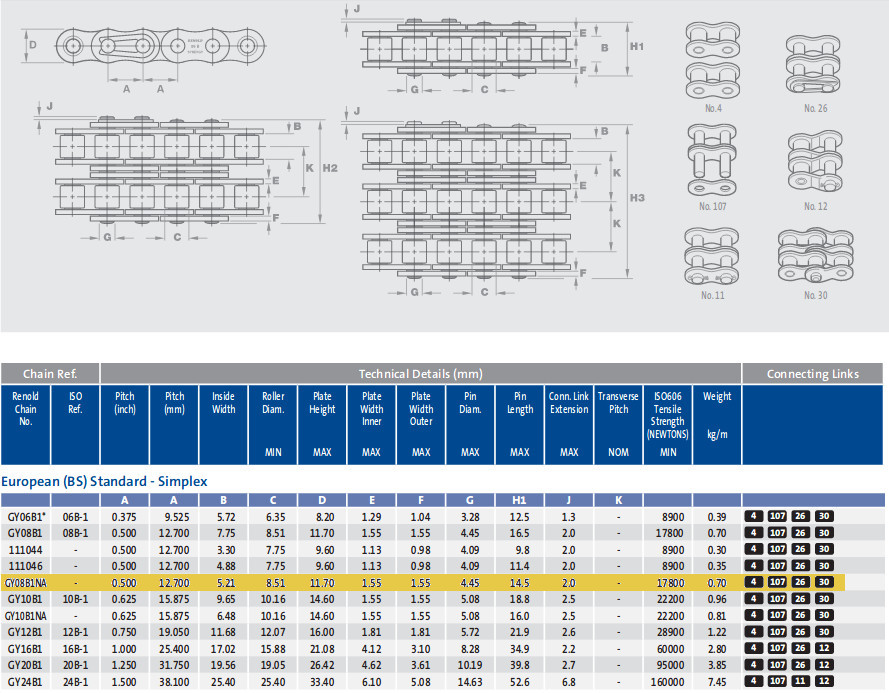 Thanks, I was starting to get confused and worried. I will investigate the rear sprocket ie count the teeth. This rear wheel has caused me no end of trouble and expense so wouldnt rule out the rear sprocket at this stage.

Thanks Piquet.  Yes all part of the 2 stroke process. Alan

I just found the latest catalogue from Renold (2014) and it appears they no longer list 110044 just something called GY08B1NA!

Well its only the spring steel clip that I need not the whole spring link. Hopefully there will be a modern equivalent that will fit.

Thanks for this tip, two spring (horseshoe) clips are apparently in the post to me!