Done it, I thi 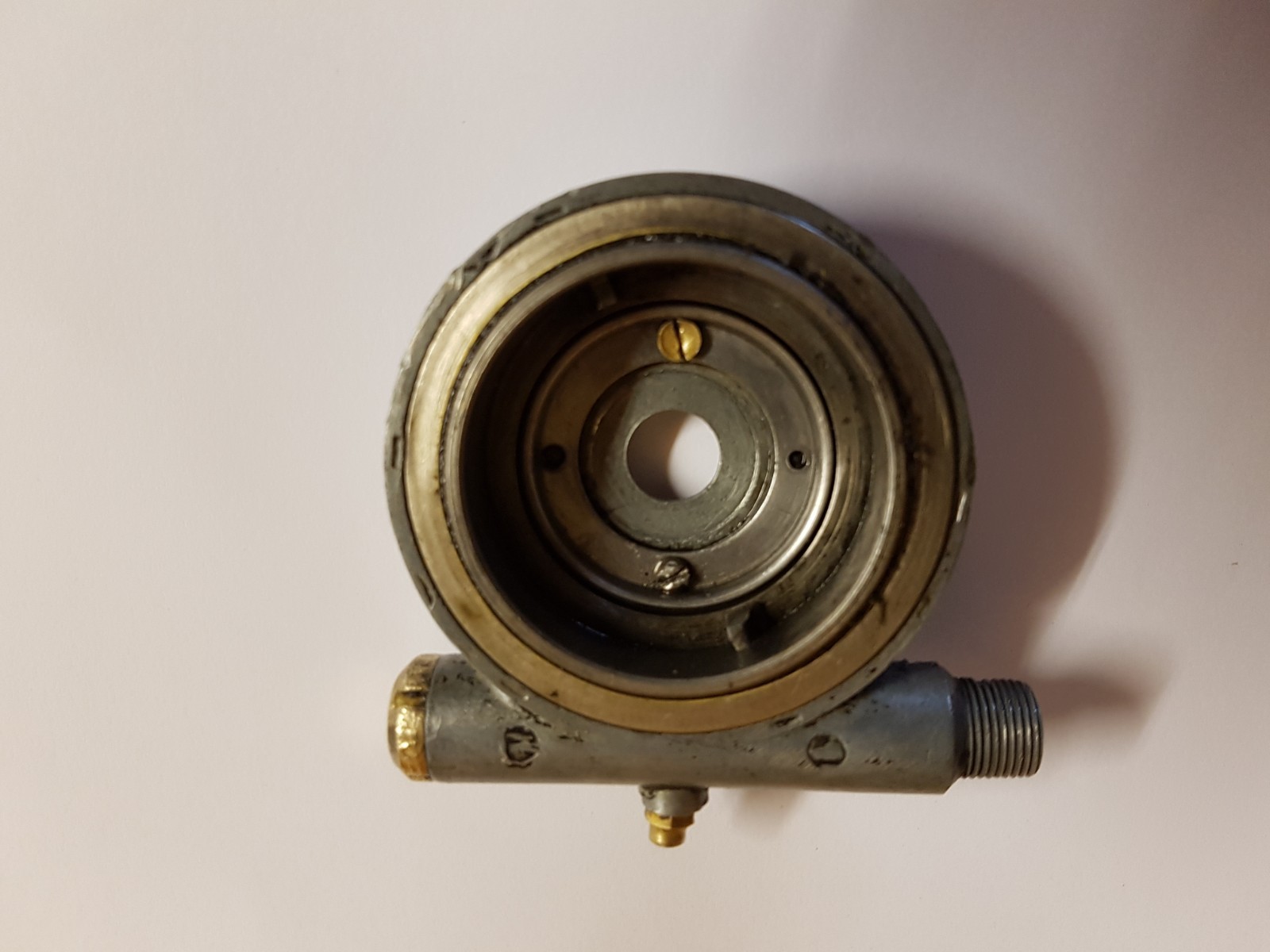 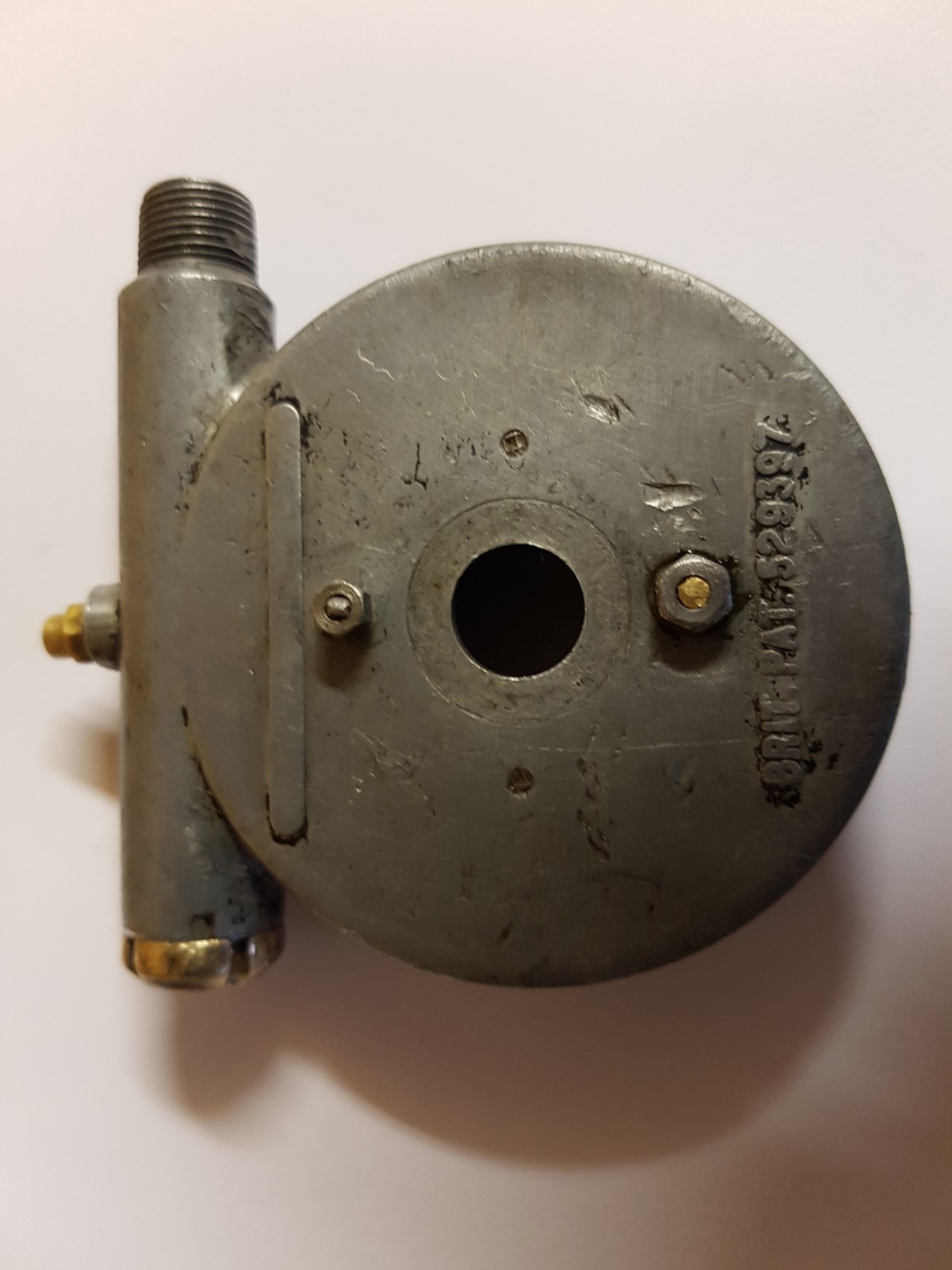 Looks like an 'improvement'. My D3 just has a recess for the occasional drop of oil. It shows no sign of ever having a nipple fitted. I have looked in the BSA Parts list the D1 and neither the rigid nor the plunger show a grease nipple on the speedo drive.

Question, do you have the bike running yet? ie is this the only thing stopping it from being used? If so, a simple cycle computer would be adequate. 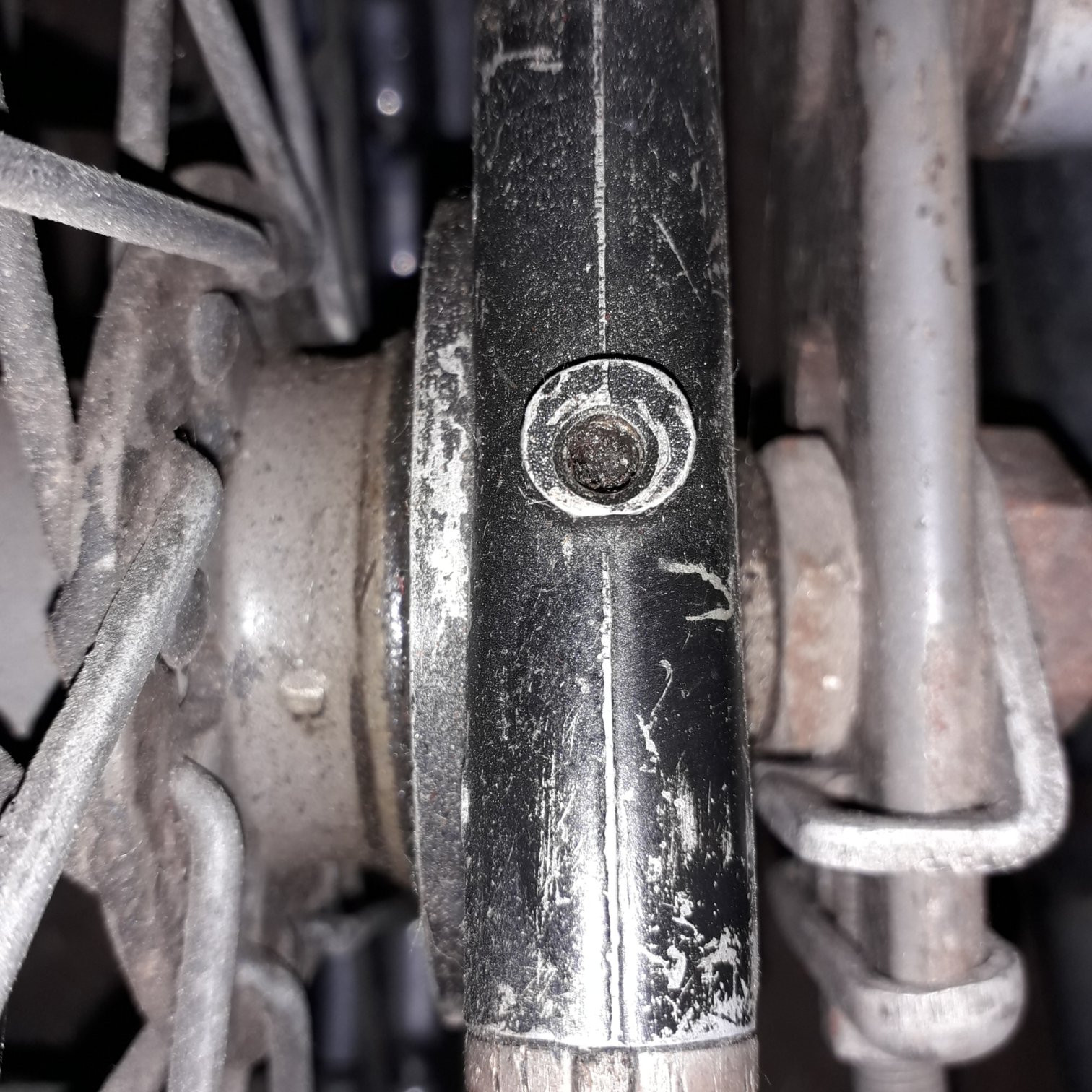 Bob, I see what you mean re parts list, they`ve slipped up on that one, even the speedo g/box for the B175 doesn`t show it.

Get broggling, as they say here in Lincs, with a compass point/bit of wire, blast with the airgun, some more broggling and penetrating oil, another air blast,  get all the crud removed and voila...threads will reveal themselves.

Haven`t forgotten you Alan, I`m on with the checks as promised.

Re the bolt "mods", looks like the two remaining screw areas show broken-off screw-heads...is that what you`re seeing on closer inspection? If you can drill them out then I`m sure I have a tap somewhere I could pop in the post for you to borrow? Whichever way you look at it, that area could be tidied up, even if the bolts were removed and replaced with a neater version.

I`ll be back with the nipple size later...unless Sunny or the Mikes et al beat me to it 🙂

Its strange the BSA parts diagrams dont show the nipples. They were definitely fitted and show on the diagrams for Smiths speedometers.

Anyway....my thoughts are that someone has tried to dismantle the drive and has sheared off all 4 screws. I read in some notes on repairs to this type of speedo that this is a problem. I agree the other holes can be drilled out and re-tapped but what comes first, deciding what scews to buy or which tap to use? It did also occur to me that as the speedo housing is made of aluminium the screws might cut their own thread.

Unless the Rigids were screws...Hans Kreuzen will know. Can`t see countersunk holes on outside of your box...like in the graphics of this clever little vid...

Ok that`s a 250 Starfire(had one of those), but must be similar to Bantams...except maybe the very early ones...but I`m guessing, because cannot get to my Rigid, it`s crammed up against a wall.

Someone did a rebuild on here I`m sure, maybe it was Hans?

Bottom of ** Please log in to view ** in DD's excellent Cub blog has speedo strip/rebuild. Different model but same principles.

Well, would you believe it? Mags did one of his tutorials on speedo drive repairs - it's in the technical archive (FAQs). It also shows a grease nipple.

Yes, I checked FAQ's but Mags' is a later type of speedo. It works on the same principle but one of the key differences is that the early drives have screws (bolts intended to be used without nuts) in place of rivets. I also watched the you-tube video but same problem- wrong type of drive!

The above link gives instructions on how to dismantle an early drive. The instructions specifically mention the screws. No mention of the nipple size though- although the nipple is shown Incidentally removing the metal cased rubber seal is nigh on impossible without wrecking the metal part.

Yes I can believe that with pressed-steel(more likely tin) seal casings. You may be able to make a special tool for removal, I`ll look at my drive.

Ok, have removed my tiny grease nipple, forgot  just how diddy they were. First time out in 66 years I`d guess...although it unscrewed by hand, no tools required, and only two full threads, no damage, all present and correct, but no wonder they fall out.

I will now attempt to find the exact thread type/size for you.

Quite right, Blue. The nipple is smaller than the one fitted to the clutch scroll.

lbayorkie said
Incidentally removing the metal cased rubber seal is nigh on impossible without wrecking the metal part.

I`ve got an idea for removing that seal. Isn`t it felt rather than rubber? If so you could probably winkle it out, it`ll handle a bit of  distorting, being felt. Pop it back in it`s tin housing afterwards. Prize the sealer holder out with one of those screwdriver mini crowbar tools on top of a little piece of hardwood in bottom of the drive....after you`ve cleaned the top and soaked in penetrating oil overnight.

If it is indeed a rubber seal, then I would clean around the top back edge of housing, maybe with a Stanley blade and let some penetrating oil do its thing overnight. Piece of 1/4" plate with hole in middle for very easy to make slide hammer, almost anyone has the bits laying around to make one(Long bolt, nut, plain washers and something heavy with a hole in it to wang upwards with). Mark plate with compass to give internal and external circumference of seal housing, drill four equidistant holes with small pilot drill. These holes also go through plate into top of seal housing(only just). Then couple sizes up drill out just the 1/4" plate. Fit your slide hammer contraption, place plate over speedo drive and screw self-tappers through into the seal housing and work your homemade slide hammer....and she should shift. Patch holes with plastic metal or araldite when you`ve rebuilt your gearbox.

Alan also said:- " I agree the other holes can be drilled out and re-tapped but what comes first, deciding what screws to buy or which tap to use? It did also occur to me that as the speedo housing is made of aluminium the screws might cut their own thread."

Personally I`d use a fine-thread tap...I still have dozens of the things. I`m sure I can sort you one out. Plenty of suitable screws on ebay, any type you fancy, you name it. Stainless, brass, black anodised etc. Mushroom headed, whatever.

Take some pics when she`s all stripped out and cleaned up and we`ll sort something out.

NB: Ah, Mike has given you good advice while I`ve been in workshop practice mode. I should have at least BA taps and another oldie....besides metric.

Just FYI, my 1955 D1 speedo drive has same nipple, as did my 1955 D3 of before. It is not same as the nipples elxewhere, forks pliungers clutch etc. Possible it's metric, on the basis that the speedo fasteners are, cos they were originally French manufacture, so I'm thinking maybe the drive box is too?

I was only going to strip it down completely if it was going to be straight forward. I had soaked it for a week in paraffin but the metal ring that holds the seal (the link I provided says its a rubber seal)  in place just wouldnt budge, its made of very thin flimsy pressed steel and I can only imagine that it was never intended to be reused rather replaced with a new one.  The drive works fine so its not essential to strip completely. I took the top part to bits and cleaned it so that will have helped.

The nipple is the only thing that is stopping me using it but I would really like the bolts replacing with screws so it looks right.

I dont know much about tapping but dont you need the tap to match the thread on the screw and nipple?, so you need to know for certain what the male thread is going to be? This seems to be the key. 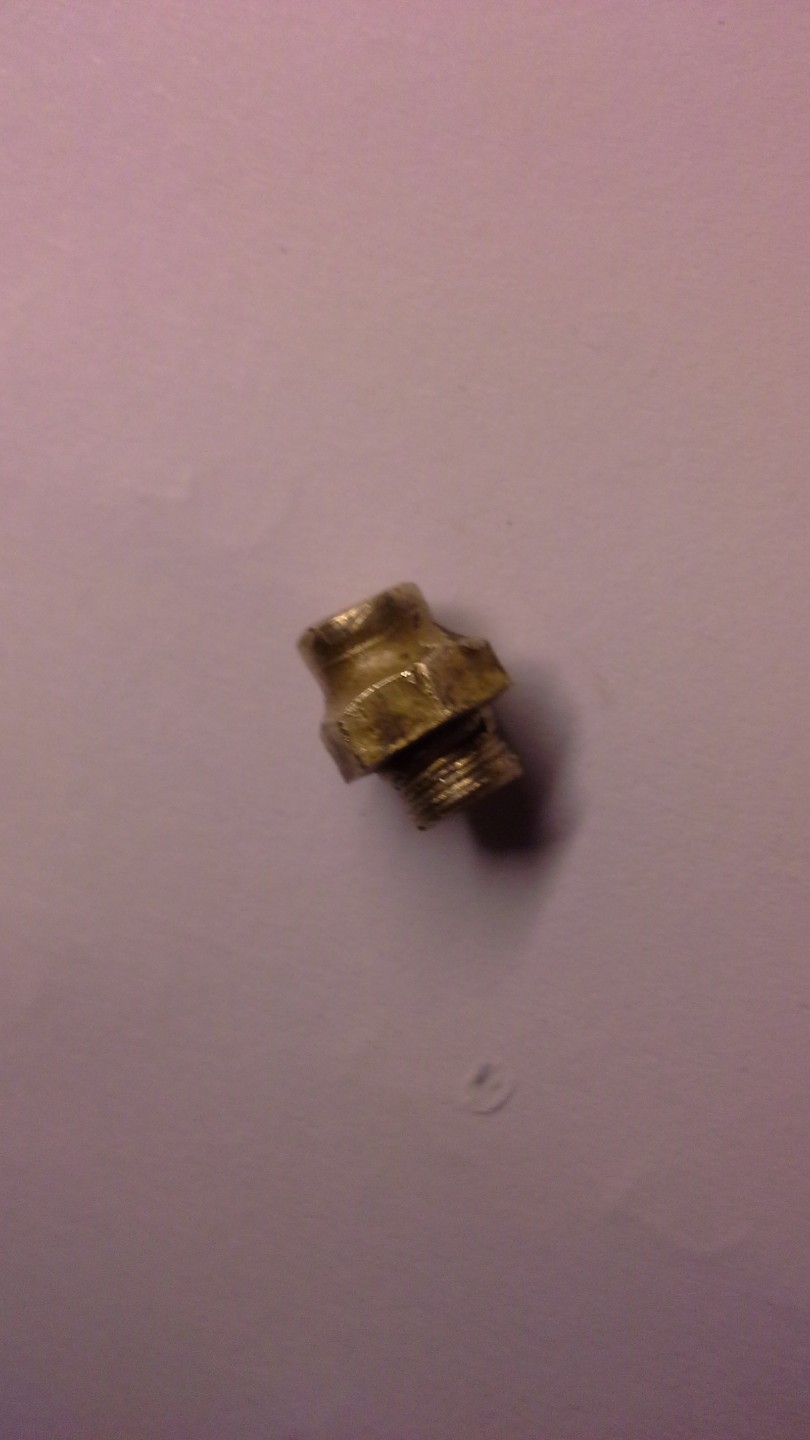 The drive works fine so its not essential to strip completely.

I'd leave it alone then! Just get some lube into it. Trouble is you've now got it full of paraffin!

If my grease gun can't be adapted to squirt some in (it's a gripping type) I've got aerosol chain grease I can use, spray it into the nipple hole (removed) and let it soak, maybe two or three treatments.

I think all the paraffin has been drained out, the seals arent that  good and so the liquid just seeps out.  Thet way to go has to be to refit the grease nipple and force grease into the mechanism.

Yep I think so too.

Threads look different on your grease nipple to the one I was looking at on my D3 earlier. Get yourself a modern-style grease nipple that fits your threads, a straight one so it doesn`t look too out of place. Anyway you`ll be packing it out with grease to start with, that`ll last you a good while before you have to worry about it. Just make sure there`s plenty around the felt seal so ingress of muck from the hub is less likely.

If you can take a measurement of the housing that the tin-shrouded seal presses into and one of your hub, I can look for a seal with those internal and external diameters.....if you wanted to go down that route.

I`m sure there are plenty on youtube, now you have the size...or this company looks promising....** Please log in to view **

This company does reducing bushes, they might do one for your fuel tank, or did you sort that?

Remove the grease nipple, repack it as best you can (so you can see fresh grease down the 'hole', fill that with grease and take it from there. I doubt very much it will be used enough to require much in the wat of regreasing. Mine has run for years like that.

I am going to see if theres anything I can use to make the grease nipple hole in the drive housing round again. I was thinking of getting a new nipple and maybe setting it in a metal filler (if there is such a thing). I dont have a thread gauge. All I can think is I take it to a local company I know that specialises in fastenings and see if they can tell me- if the thread isnt too mangled. They may be able to provide a new nipple- Im not sure if they qualify as fasteners- probably not!