Mags 1 said
Take inspiration from the fact that even if the bearings are rusted to the crank's  shafts, bearings aren't generally "rusted" into the ally casings.

Mainly because it's generally a metal to metal contact and therefore devoid of air to enable rusting.

Here's hoping on your behalf!

No guarantees of course, but I think you will get it apart eventually.

Have you tried the South African lad's idea of using two bits of studding and two pieces of flat drilled steel plate, undoing the nuts from inside the plate forces the barrel studs apart.

You do need to be careful using the above method as the top section may split! but the lower section may still stick causing possible damage. It's a «censored», damned if you do, damned if you don't.  I had a similar story when I split my D1 motor.  Managed to get the gap at the top seen in the pic; then used the flat of an old steel engineering ruler to move down the gap widening it as I went (steel was heavy enough to allow a little leverage). The flat of the ruler helped prevent damaging the casing.

I think I now EXCACLY what you mean MD, I just got back home and my pictures tell the story, R.I.P.

Everything was that rusted stuck, it must have been submerged in the salty flooded river water for a long time and than left for the a long time, My friend helping me said that it would have never come apart, no matter how hard we would have tried and he has been restoring bikes for at least 40 years, His latest is a 1913 Triumph.

On a lighter note, I did start to put plan B into action, I have a spare set of YD number empty casings that match my 1950 frame numbers, So I might transfer everything of the 1953 frame onto the 50 frame, All I have to do is paint the just bought 1950 front guard and find another twin screw toolbox.

Or maybe get a 1953 BD number set of casings? the best thing is that they still make Rum, cheers. 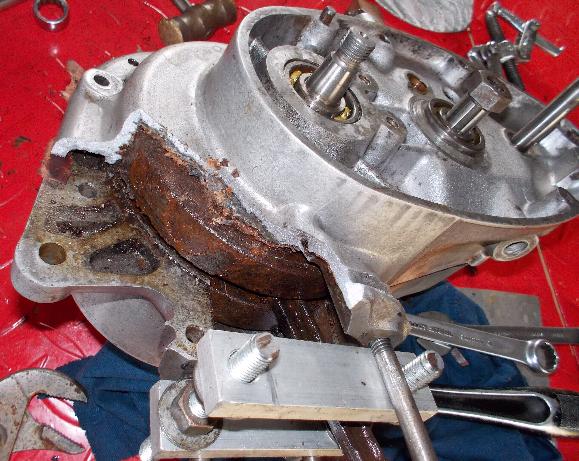 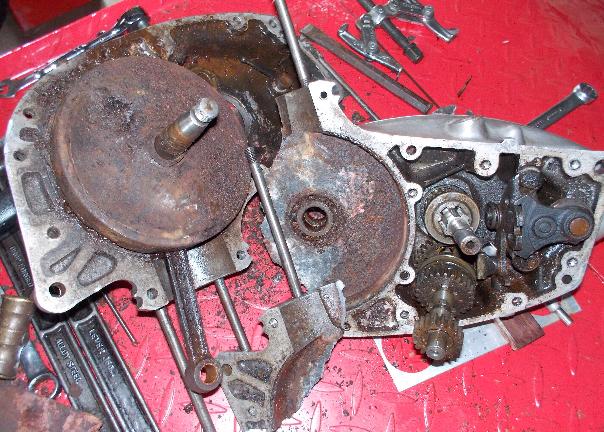 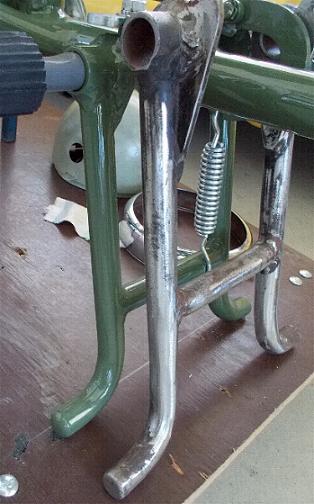 I did do some thing productive this week, and took Sunny's and Demitricy's advise,

I extended the centre stand by welding 30mm. into the bottom part of the legs, I thought it would look better than welding blocks under the feet.

So sad you didnt listen to me, and try split the case with the cutting disk.. it would come up better

No, seriously, it would never come apart and be able to use again !! but the gearbox area  looks ok, right? you can save some parts from there...

Thanks LOL a cutting disc would have been quicker, Ah well, at least I can carry on with the restoration now.

I hope to use the gears into my other YD engine cases, But I don't know if there is any difference between the cases??????

So the question is: Is there any difference between the 1953 D1 gears and the gears out of a 1950 D1?? are they interchangeable?

Hope you all enjoyed this episode of "50 shades of rust"

Hans Kreuzen said
I think I now EXCACLY what you mean MD, I just got back home and my pictures tell the story, R.I.P.

Truly sorry to see your engine end up like this. Never seen an "exploded" view of a bantam engine before!

Maybe it was never destined to go ever go again perhaps, by the look of the amount of corrosion there.

Awesome Mags1, I'll start cleaning and pressing the old bearings out of the other casings today, Thanks for the info,

I am a very happy man, All the best, ..Hans "The Destroyer"

PS: If anyone else has problems splitting there casings, just send them to me, I am a expert.

Oh, and Thanks sunny for your PM message.

Blimey, that was rotten bit of luck to say the least!!!!!  Have sent you a PM

Poo happens, I send you a PM back..Hans

I've been musing over this catastrophe for a while and began to think about what if you'd filled the flywheel area with diesel oil or used lots of heat, maybe outcome might have been different.

The cutting disc idea wouldn't have worked because you'd have destroyed the special two stepped  mating surfaces around the flywheel periphery area.

It's all history now, perhaps you can use the gears etc.

Hi Mags, we had the engine filled up to the top with 50/50 acetone and tranny fluid for about 4 weeks, than we drained it out and heated (flame) the alloy, we swore at it, we talked nicely to it, we hit it, we threatened it to use it as a door stop but it just wasn't suppose to come apart.

I have pressed out the bearings of the spare 1950 casings and just have to clean them up, at least I can move on now and keep working on the project.

The gears look good (I think) and will be used again, I do have a crank, barrel and head, I'll let you know how it all works out.

I am also busy welding, tapping, sand blasting the 1950 frame to match the casing numbers I have.

I do want to thank all the forum posters in my post for there help, info, HUMOUR and great inspiration to help me finish my bikes.

Well that's where you went wrong!; you didn't threaten to use it as a boat anchor! that usually works!.

The gear clusters are interchangeable so no problems there, but the YD engines often have the gear indicator arm on the outside this is not fitted on the BD engines.

Unless it is a very early BD engine then the pitch of the cylinder studs is different 50mm on a YD engine, 53mm on a 1953 BD engine and 55mm on all post 1954 engines, the guide is the larger fin barrel will be either 53 or 55 but you can get very early large fin barrels that are also 50mm.

The bearing engine seals are also different the YD engine only have three seals the DD engines have 4 an extra on the inner face of the LH crank case face. the earlier fly wheels and the later flywheels are not interchangeable, there is also a batch of flywheels that have a fan attached which acts as an oil thrower.

The bearing engine seals are also different the YD engine only have three seals the DD engines have 4 an extra on the inner face of the LH crank case face. the earlier fly wheels and the later flywheels are not interchangeable, there is also a batch of flywheels that have a fan attached which acts as an oil thrower.

Have you got that the right way round H? My 1956 D3 (Eng no BD3B) has 3 seals - 2 on the crankshaft, one on the gearbox outlet. It also has the fan on the generator side of the flywheel.

Note:- On D1 Engines after 1954, and all D3 Engines, the outside crankshaft oil seal is placed next to the flywheel instead of between the two bearings

Owen Wright in his book 'BSA Bantam' says on Page 53, when talking about the modifications when the D3 was introduced,

More significant was a subtle change to improve crankshaft lubrication. The primary drive seal, previously found between the two main bearings, was moved in board up against the flywheel. The left-hand seal was pushed outwards by 0.010in and the crank extended to suit. This allowed oil drillings to feed lubricant from the primary drive and on to the bearings. Until then the Bantam engine mainshaft had been entirely dependant upon petroil.
..........The humble D1 had also benefited from some of the same attention ........

I'm not 100% sure as I've never had an early D1 or early D3, but I suspect these early engines (3 seals) had an oilway drilled vertically down from the transfer ports to help lubricate the main bearings/seals. The later engines (4 seals) had oil passages to supply gearbox oil to the main bearings (no transfer drillings).

If that is the case, mixing the two systems would result in either dry main bearings or an empty gearbox depending on the individual setup.

Thanks for all the information, Good to hear that I can use the gear clusters out of the broken engine.

I will read al the above carefully until my little brain absorbs it.

I thought I would show some pictures of the YD engine I am going to use in the 1950 frame, the number on the front of the casing is: 38205 YD

My BD2 4286 broken engine did have the gear indicator on it and I would like to fit it back in the YD engine., It seams to fit alright.

I don't have a fernier yet to measure the stud spacing properly, but I make it to be 52mm.(hard to see in pic) and as you can see it also has the lubricating holes for the crankshaft bearing, 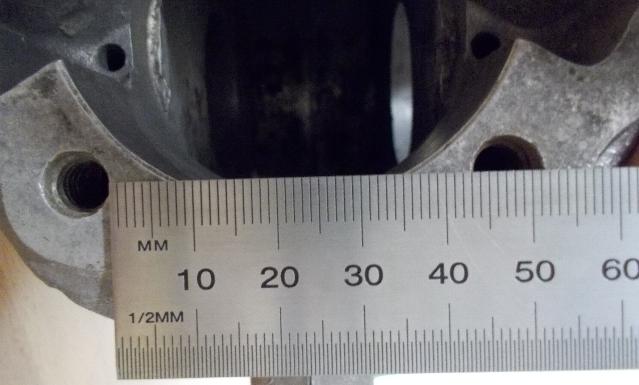 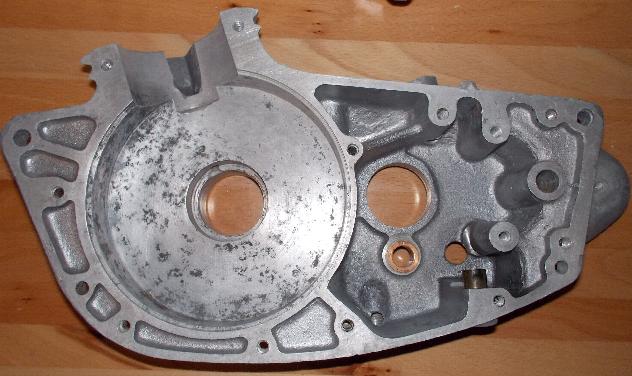 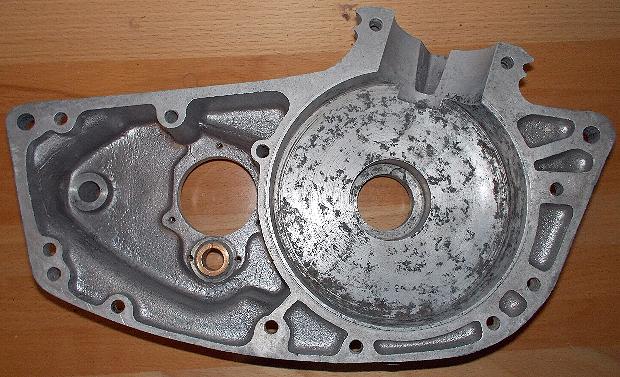 Here you can see the broken alloy on the casing that I will have to fix, I was thinking of using a special glue I use for broken alloy 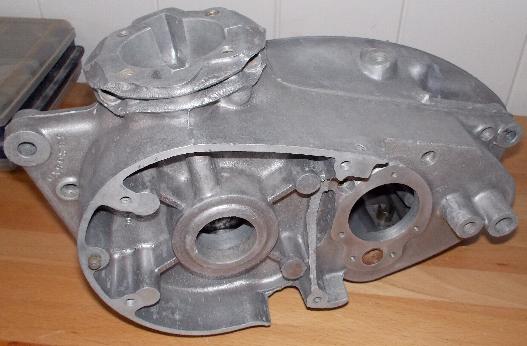 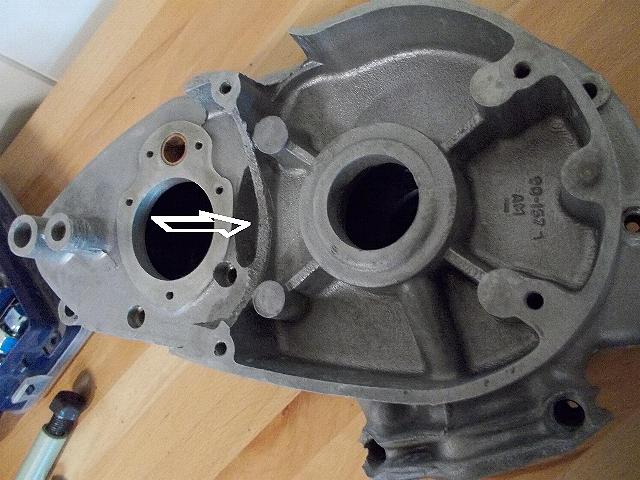 Here you can see the broken alloy on the casing that I will have to fix, I was thinking of using a special glue I use for broken alloy. Bye Hans

I have exactly the same break on my D3, I suspect from a broken chain. I have 'repaired' it using a strip of ally and some two-pack plastic metal, but it's not been properly tested yet.

Yes cocorico, That is what I had in mind, the stuff I use is like a clear super glue and a powder and sets hard instantly, you can than drill and tap it or flog it with a hammer, it sets that hard. It also really good at bonding fingers together, I am speaking from great experience. PS: I haven't heard from Dimitriscy for a while, Hope I haven't upset him to much with all my stirring.