Last weekend, I was at a car show, and... all I can say is that the title explains it all! I've already got the engine down to the cases, but it keeps on bringing up surprises, so I figured it might be of interest to some of you, and perhaps of some benefit to me! 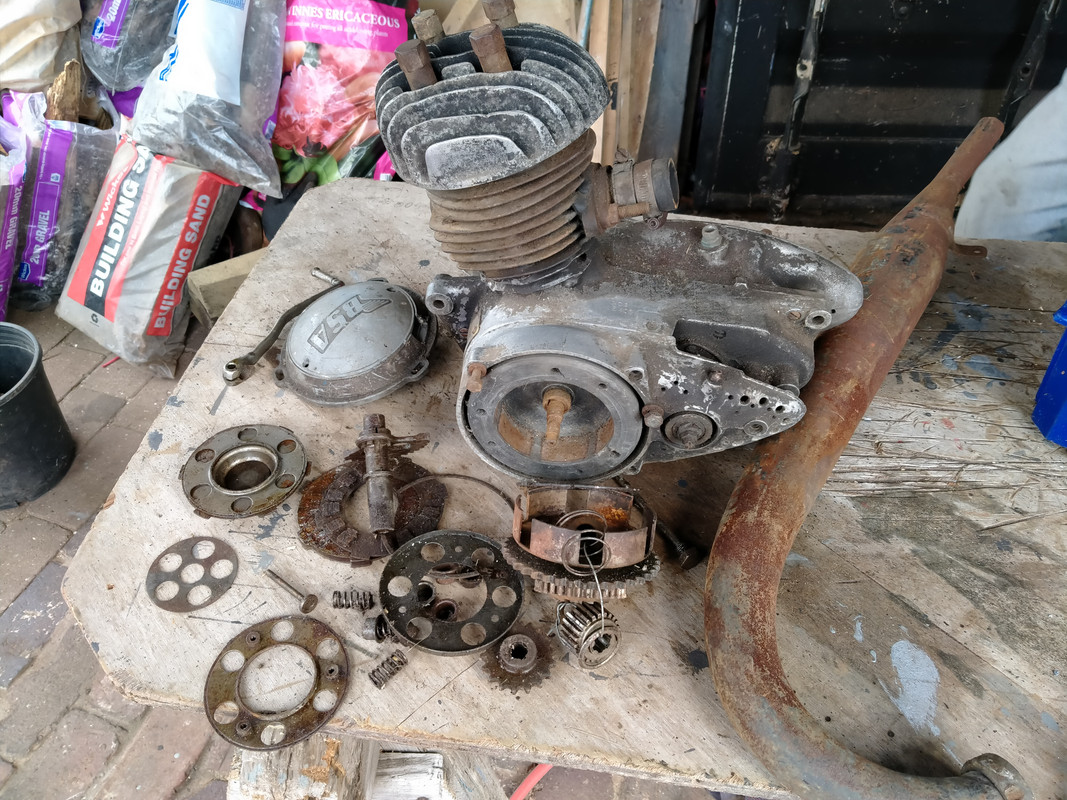 I saw that it had a Todd head, the clutch cover had had holes drilled to save weight, and that there was a flange fitting for a carb, but that was about it. I also noted the parts missing (primary drive/clutch, original ignition assembly, carb).

Once I got home, I pulled the head off to discover no piston; given how loose the head nuts - and may I boast about the size of my nuts a second - it seems that the seller had noticed this, hence the relatively low asking price. It became obvious that the ports had some work done to them (I'm yet to measure them - I'm not sure how best to do it) and also that the bore was in generally ok condition. A light hone, and it came up really rather well.

Given that the engine had been left more or less disassembled, it didn't take too long to get all the way down to bare cases - about the only weird thing being that there was no job key on the flywheel, not that that made it any easier to get off!

With the cases apart, you can really see where the time was spent! There are 3 individual packers to reduce the volume below the cylinder: one on each side of the crank, and a horseshoe between the discs. 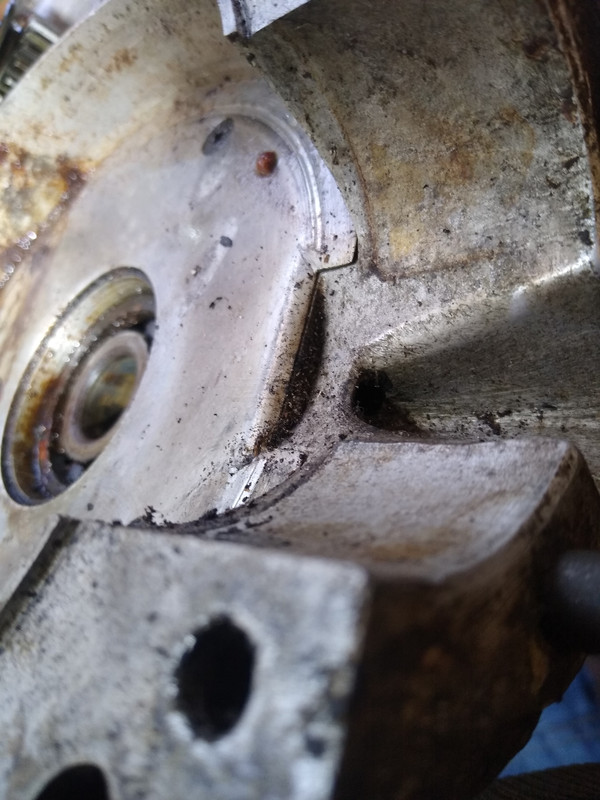 As with measuring the ports, I need to measure the teeth in the gearbox to see what sort of ratios it's running. But certainly, I haven't seen anything disastrously wrong with it; one of the main shafts of the gearbox has gotten warm, and the big end is very badly warm, but that's it. The only other remaining 'modification' to the engine is that it has clearly been painted black at some point; I have seen that this is something that Todd recommended.

So, now for the questions. I have no idea about any of the history of this engine; the engine number is BD2 2435. I don't know whether this would mean anything to anyone. Next, I need to make up for the missing parts: I've no idea what sort of primary drive ratio it would have had, nor the clutch (I doubt a standard six spring would be up to it); next, I'll need to modify the stator plate to be able to get the timing I'll need for the higher compression, and ideally the altered ignition cam to suit; and last but not least, what the piston may be - if I will need to do any modifications at all.

So yeah, that's how it is. I want to have this as a fast (ok, very fast!) road engine; I'm only 17, so I'm restricted to a 125cc bike. As such, it needs some degree of reliability, but I'd sacrifice that for lower! If anyone can give any advice, I'd love to hear it, and I'll post more as I progress with the rebuild. 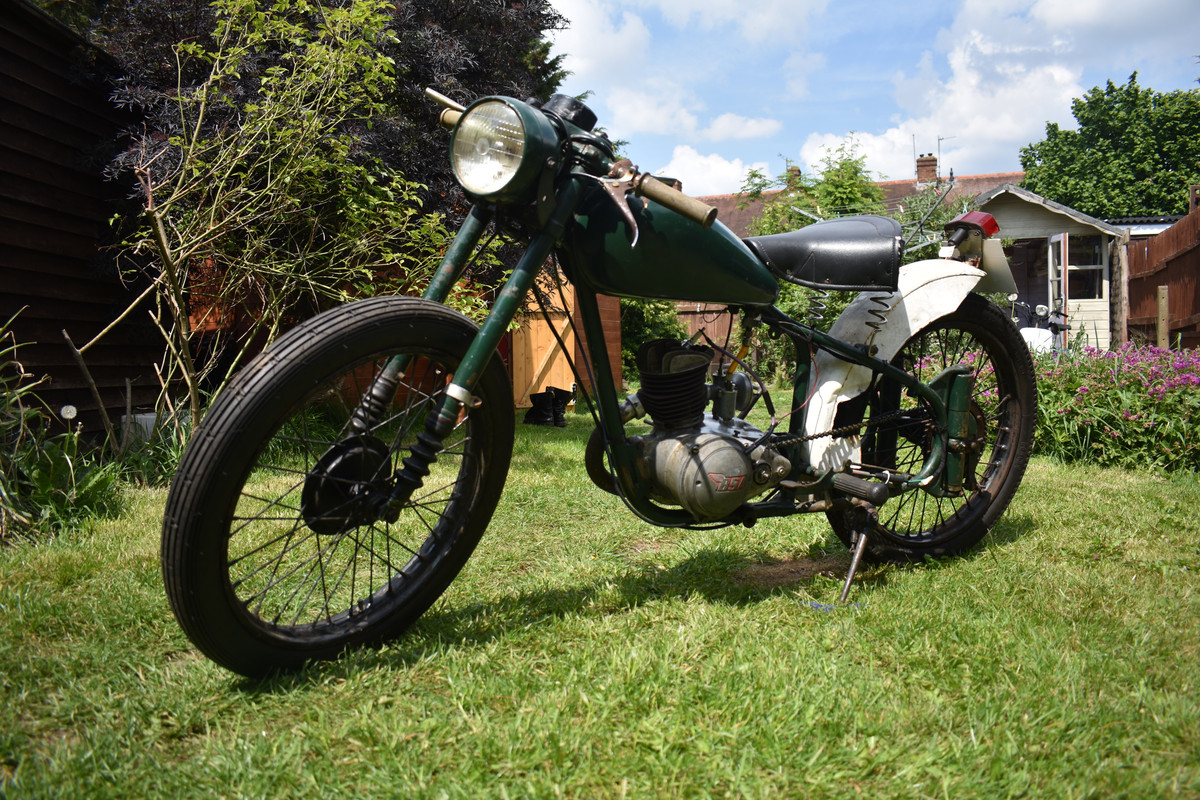 Last but not least, here is the frame to take the transplant!

Lucky you! Your engine looks to be from 1953, probably with WicoPacy ignition (** Please log in to view **) - though you have a Wipac cover plate. You may struggle finding a WicoPacy set up, parts for a Wipac one are more common. Cams are pretty rare and a modified cam more so.

You may find more info / advice on the Bantam Racing forum ** Please log in to view ** and there is also a section of this forum for Bantam Racing.

Thanks for that link; I made sure to check that before I bought the engine! As for the Wico Pacy ignition, is it not the same as a Wipac set up? I thought it was just different names for the same thing?

And as for the racing forum, I hadn't really considered that, so cheers for the link. I might have to check it out to see if I can get a bit more info.

Lots about the differences elsewhere on the forum, but basically WicoPacy was the first iteration of Bantam ignition and produced less than 30W power for lighting, etc:

Wipac was the next step, slightly different in appearance and generating around 50W. They were both the same company. 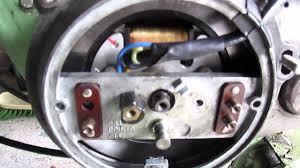 First image courtesy of Hans Kreuzen of this Parish, you have the outer cover for the Wipac version.

Ok, I see. I've noticed the different set up on some bikes, but I didn't really know the differences, so thanks for explaining that. Also, I had no idea that they went on until 1953. The original engine for my bike - 1952 - has the same Wipac set-up. But yeah, once again, thanks for the help.

Looks like someone has spent some time on this, did the exhaust come with the engine?

I don’t want to wee on your chips, but you really mustn’t get your hopes up with regard to performance from a D1 engine. They can certainly be made to go very well, but the extra performance comes at the expense of rideability. A tuned D1 really needs a close ratio gear set to make the most of what becomes a very narrow power band. That, in turn, means it’s a proper pain in the bottom to ride in the real world, as opposed to on the track. Rebuilding an engine after every other race isn’t so bad (or it wasn’t back when parts were really cheap and plentiful), but it quickly becomes tiresome when you’re actually trying to get somewhere on the bike.

I went through pretty much exactly the same baptism of fire that you’re entering now, only forty years ago. By all means rebuild the engine and learn the lessons for yourself, but I’ll echo the advice I was given back then and offer it to you now: pass your test, and fit a complete later engine rather than plough resources into the 125. A D3 150 engine is a better starting point by far if you want to keep the looks as unchanged as possible from standard, and a D7 175 engine makes a D1 go very well indeed. The more powerful 175 variants will fit too, but you’re edging beyond the capabilities of the cycle parts. A D1 is as easy to fall off of as it is to ride. In over forty years of riding and plenty of scrapes and spills, it’s been coming off my D1 where I’ve hurt myself. 🤣

Best of luck. Keep us updated. 👍