BSAdave said
Regarding the masking tape issue, I had used the 3M tape that I got last year from Halfords this is what I used on my other 49 er tank. I run out of this after getting half of it done so I went back to Halfords to get some more, Well yesterday I was in Halfords and this is when I noticed the tape that they now sell is marked as Harris. This is the tape that «censored» up the paint job, So i would not recommend it to you, get the 3m tape, I now have a roll of the 3mm tape to use.

Tell me if this will work, I need to touch up a few places on the red line, I was thinking of spraying some of the red paint into a pot then use a brush to paint it on . Good idea or not ?

Think I've said a few times Dave but 3M tape is the only one that seems to work. Harris is a budget decorating brand, might be alright for skirting board but not for nice paintwork.

No issue spraying the red paint into a pot and painting it on. For the pinstriping it's much easier to paint the line with a brush than spray it. The only thing you may find is that the spray paint from a can might be a bit thin so it could run if you use too much but as long as your careful and/or mask up it will be okay - or leave it a while and the thinners will evaporate and the paint will get thicker. Just paint it on and I usually remove the 3M tape just before the paint is completely dry otherwise, if you leave it to dry completely theres a chance the paint will pull off with it if you thickly overpainted the tape. If it does however, just touch it back in with a thin brush.

The trouble is I keep forgetting to take my glasses when I go out, I have only just started to need them to read and I was in a rush and didn't read the label, Why Halfords are selling Harris stuff in a car parts place, but that will be another rant for another time.

Regarding the clutch cable, I ordered new one form a certain supplier and it didn't fit and not wanting or having the skill set to make my own one and after my attempt of cutting one down I did a bit more research and low and behold the forum had the solution.

See this post from 2013 number four from the Artful Bodger

no one replied to if it worked or not and being has I have meet Colin (hospital Bed post ) and seeing some of the stuff he has done I had no doubt this would work, what did i have to loose ? well from what I can see it does. I have to get the engine running to make sure all is well.

Plus any one that put up with James may must be good. ** Please log in to view **

It started up for a good five minutes then there was this awful mechanical whine and before I could do any thing it locked up solid.

I have run out of time again and won't get any more time until Wednesday .,.

This one is fighting me al the way

Stupid boy, that is all i'm gonna say about the engine locking up.

I have a spark, I have fuel going into the engine, but it refuses to start,

Suck, squeeze, bang blow how hard can it be.

Has Eric said "I'm playing all the right notes—but not necessarily in the right order."

enough of this I have a day off and it will be spent dragging and kicking this engine into life . Or will it?

It started up, it won't rev but it is a move in the right direction.

There was two problems, the timing was slightly out and the float in the carb was sticking, both of these now rectified and it is a goer

Watch out for speed controls!!!

Well done Dave! I could do with some of your magic dust for my D5 - It's being very stubborn!

Today I changed all the grease nipples (8) to ones that my grease gun would fit, then went round filling them up.

Then it was time to do something I had been putting off for a little while, I sprayed the petrol tank with a petrol resistant lacquer, I did the tool box first and let it dry just to see if the paint reacted but all was well. I then washed down the paint letting to dry before I sprayed the lacquer, so far so good.  i will let you know in the morning how it went.

Looking forward to hearing how it turns out so I can avoid what happened to me last time. What lacquer did you use?

Well success , nearly, The lacquer did not mess up the paint but tiny bits of dust in certain places did, I'm sure this can be polished out, The lacquer does take a bit longer to dry than the paint , I left it over night and just been to look at it, it is nice and shiny.

The lacquer I used was from Halfords, if you read the reviews it gets a nasty write up, but it did work for me, the trick it would appear is not to give it two coats, It goes on quite thick and if you are not careful I can see it easily running. The only thing i should have done is apply the decals before putting this on. I'm going to do a two coat test with this  on a bit of metal sprayed with the same paint and see what happens. If you look at my 49 thread I had the same problem with lacquer and that was with a completely different make. Does it need two coats ? Will it work ? The other thing it does say is not to use it on white paint there is a big warning on the tins lid telling you this, my panel is sprayed Ford ivory white, this did not change colour.

If I had read the reviews of this paint it is probable that I would not have purchased it, but it appears to have done the trick. Having tried other manufacturers stuff and had the same problem it is no worse or better than the other ones i have tried.

Would I use it again ? not sure, I'm not convinced that any of them work as they should. It would seam that two pack is the way to go but with out expensive PPE and the dangers of using it, it is not for the DIYer , in my opinion,  In summary I am pleased with the result, it will never be a show winner but it was never intended to be. It was built to be used and used it will be. 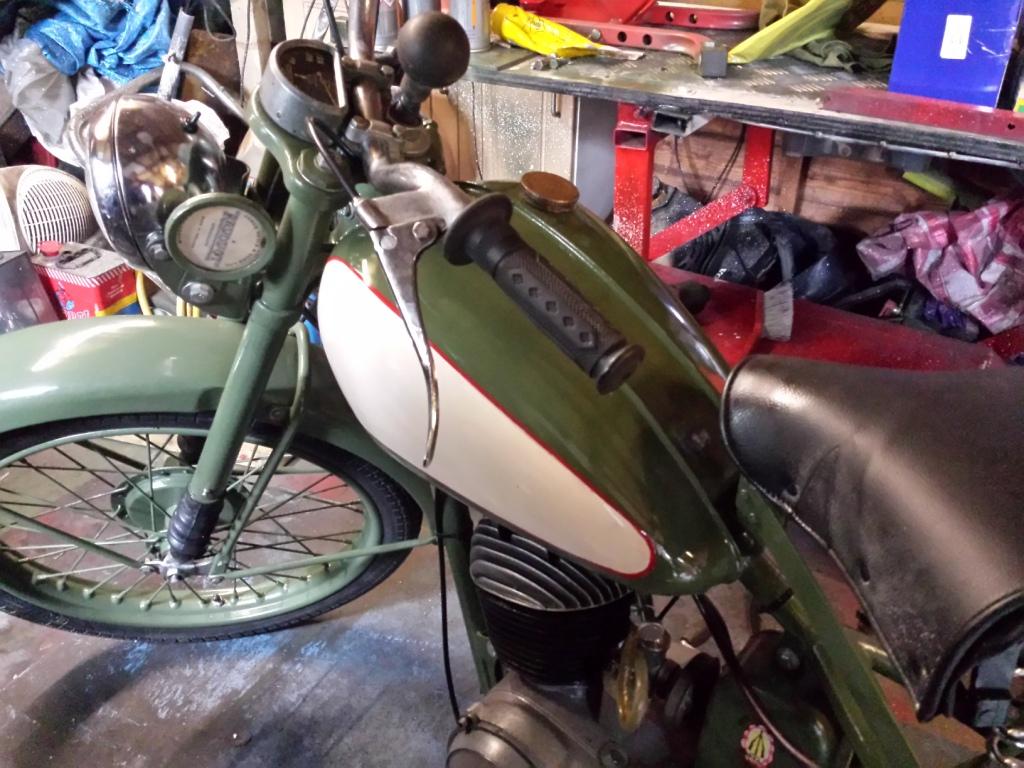 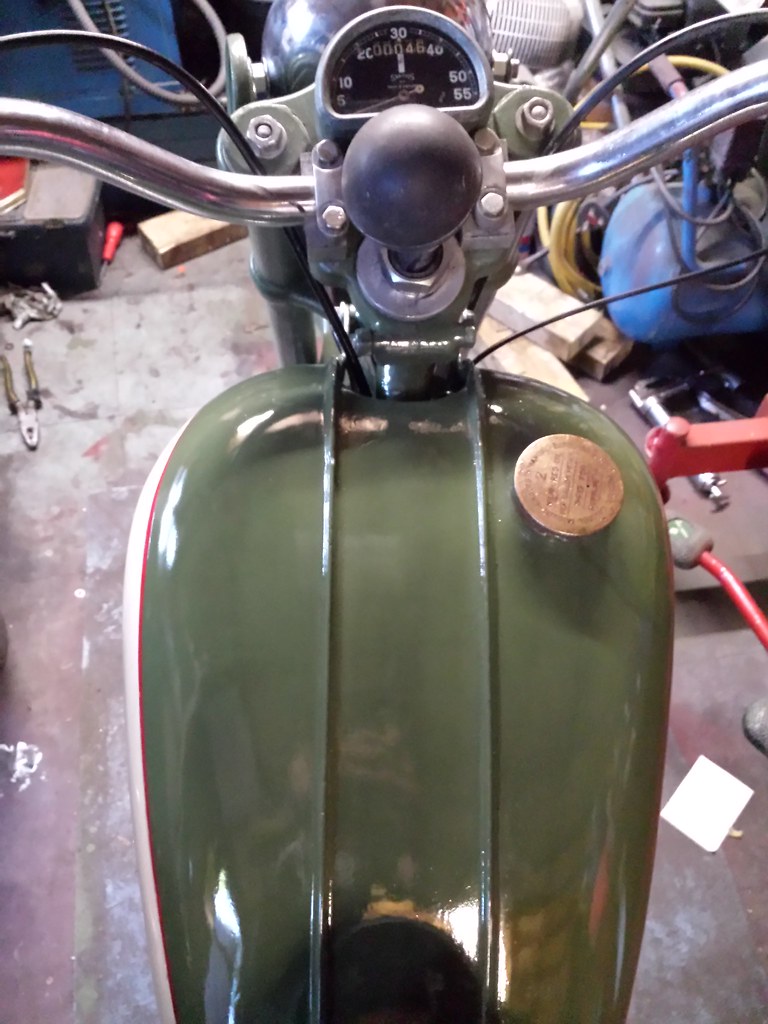 Did you notice that I finally got the fork gaiters to fit over the top. And the chrome head light, Why did I use this ?

I am not prepared to pay the price these sell for on e bay or any where else for that matter it is getting ridiculous the price of certain spares, I will play the long game and wait until i find one for a sensible price.

I'm waiting for the new exhaust down pipe to arrive and once fitted I will take some better pictures of it.

Also I will have to change the gearbox oil seal and gasket has I have a leak, not bad but needs doing,  I can't remember doing this when i rebuilt the engine Dahhhhhhhhhh 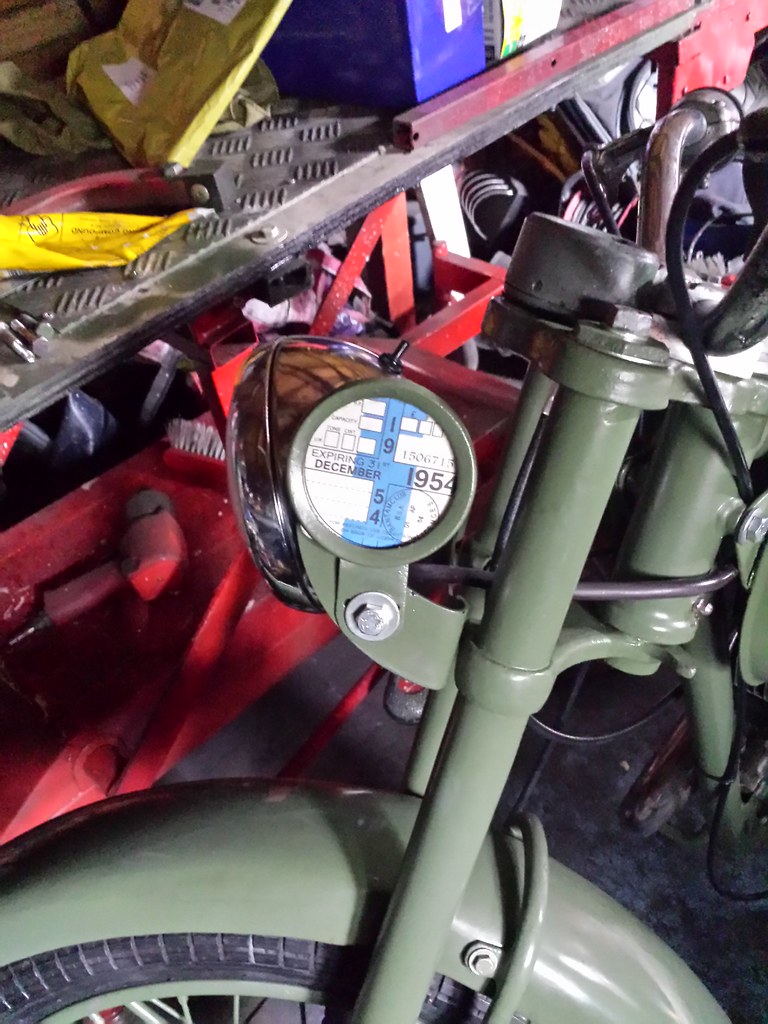 An update on the clear coat lacquer ,

I have been informed that the only way to apply the lacquer is as follows,

Sand the paint with a 1200 wet and dry paper until the paint is matt, clean off and dry, wipe with panel wipes, then you need to give it three coats doing each coat at fifteen minutes intervals, once the lacquer is cured it can not be over coated. You then need to leave it for 48 hours before any petrol gets any where near it. You then to leave it for two weeks to harden before attempting to use any sort of rubbing compound.

This would explain all the problems. unfortunately it is too late for me.

Any one wanna buy this one ?

Got it off the operating table and gave it a spin round the garden.