Look a great resto , I am jealous of your garage, I struggle with my 2 sheds, your centre stand spring looks new or is it an original cleaned up? they are hard to source, the D7+ springs are too long, if it is a new one where did you get it from?

Hi Larry thanks for the compliments, the stand spring is the original one from the bike I just wire brushed the rust off, thinking about it maybe I should have sprayed it silver.

I thought the “mistake” was fitting the footrest rubbers before putting the brake pedal on...

Well spotted Glen but the reason the lever couldn't be fitted somebody who shall remain nameless forgot to paint it, and then when it was painted on Friday he wasn't happy with the finish and re-painted the items on Saturday(you know what these arty farty people are like) but be fitted next weekend. 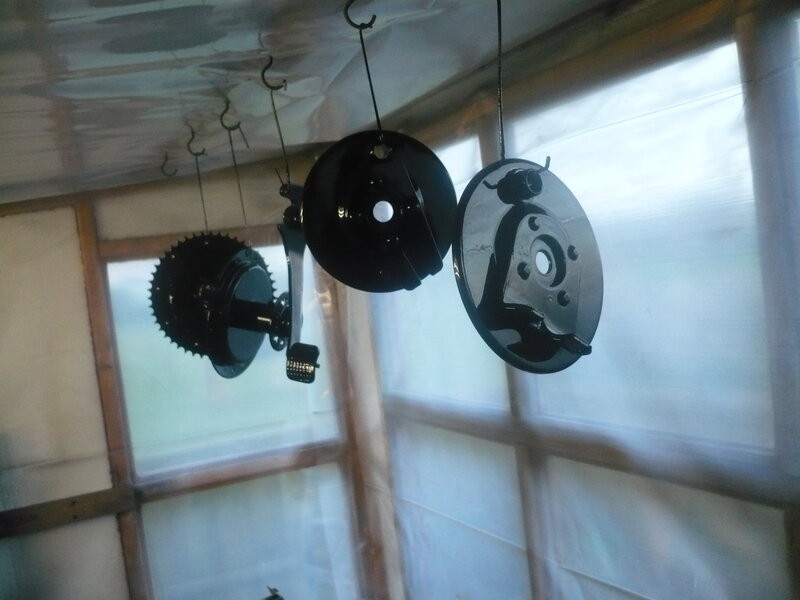 The mudguards were given a tidy up all the dents beaten out a spot of filler to hide the small ones. 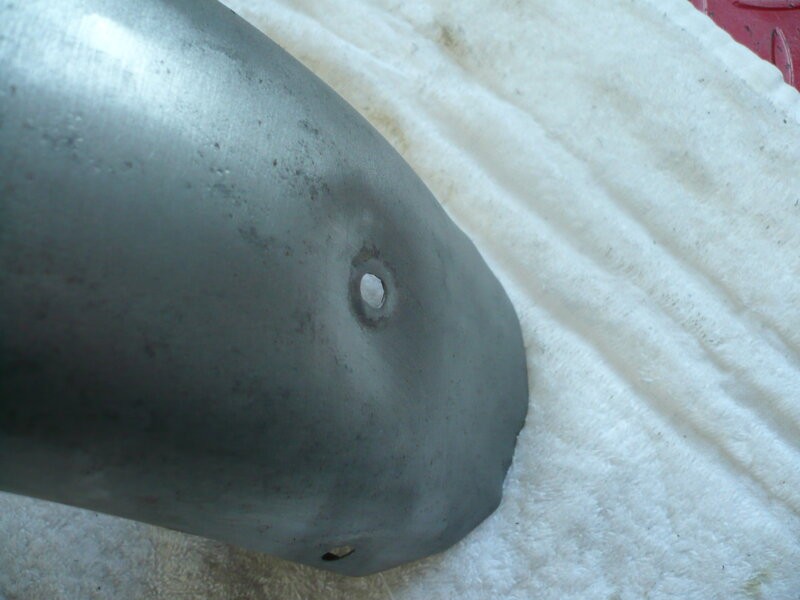 More photos of the mudguard work 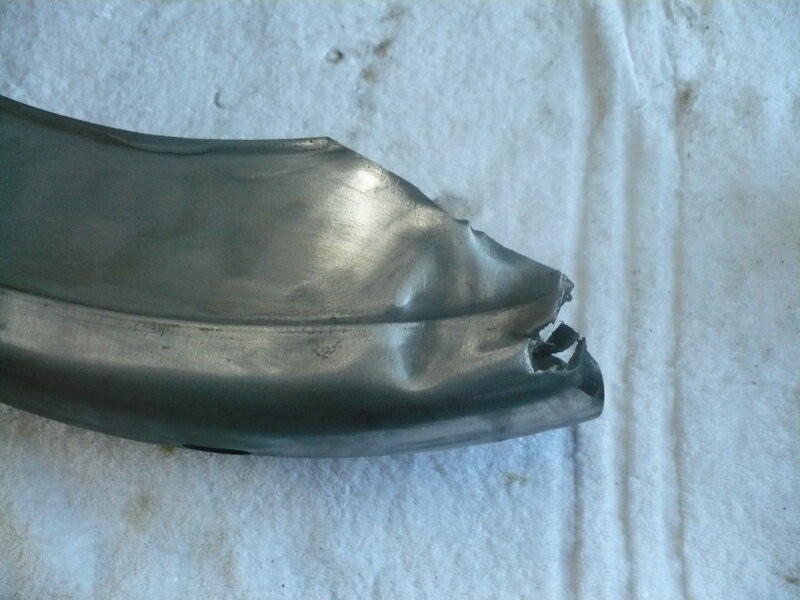 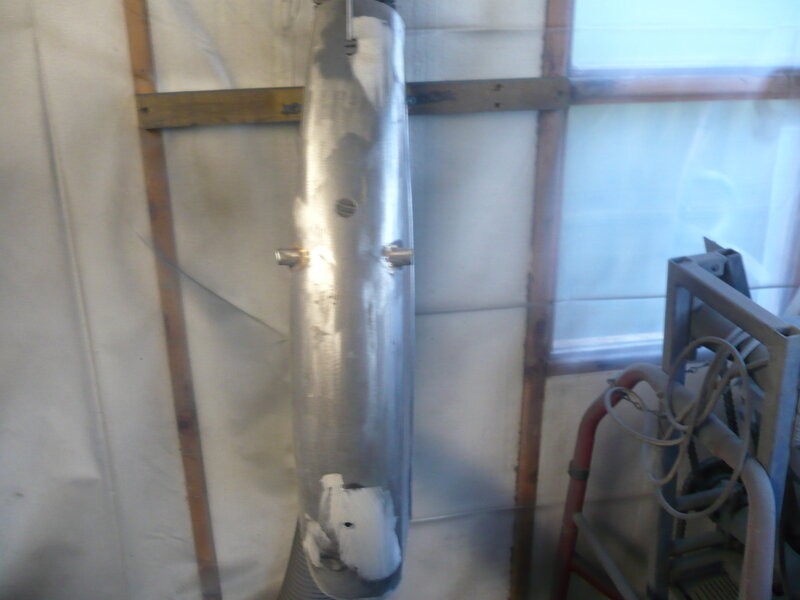 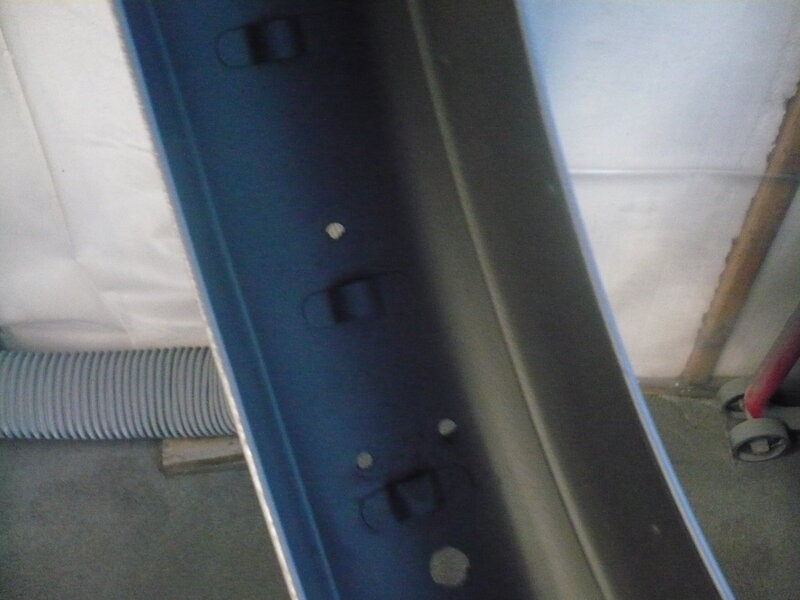 The inside of the mudguard gets coating of some stone chip spray we have, as you can see the mudguard is in great condition, this is the rear mudguard so oil leaks and chain lube help to stop corrosion but even the wire loops are still all there which is rare.

As I couldn't fit the brake lever I got busy on the wiring loom, I wanted to keep the original switch and plug but also fit as you have seen before a 6v A reg re/rect. There are two wires which are dark red and green which run from the genni to the light switch these wires not be be used as far as I can tell because also there is a translucent resistance wire which is not needed so these were cut out (too late).

I added two black wires to the loom, one for horn push and one for engine cut out, I won't add the brake switch supply and rear light till later. 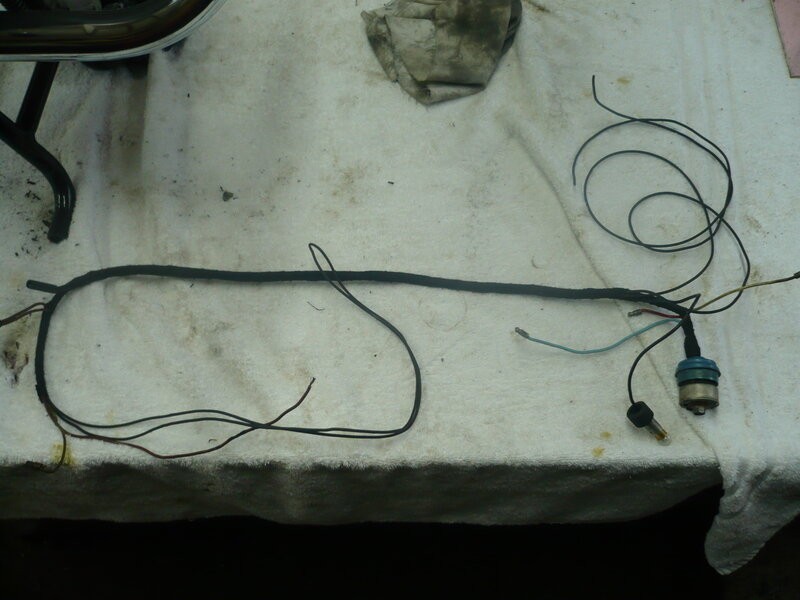 As I couldn't fit the brake lever I got busy on the wiring loom, I wanted to keep the original switch and plug but also fit as you have seen before a 6v A reg re/rect. There are two wires which are dark red and green which run from the genni to the light switch these wires not be be used as far as I can tell because also there is a translucent resistance wire which is not needed so these were cut out (too late).

Translucent should be the earth wire for the headlamp back to frame and battery, so shouldn't have any resistance ...

Green wire is the low power charging winding, this is connected all the time to rectifier and thence battery.

At least, if wired up as standard ...

The  A reg 1 will replace the Wipac rectifier which will rectify the volts (AC to DC) and limit the output to 6v, it will also monitor the battery and keep it charged, it's a very good bit of kit, when I work on an alternator bike I always fit an A reg 1 and if working on a dynamo bike I fit a DVR2.

Leon sent me some photos of the progress on the tank, it was prepared at the same time as the Matchless tank and that tank was the worst tank we have repaired, this tank was only used for one year so we did our best to save it, (well Leon did), the Bantam tank was in good condition. 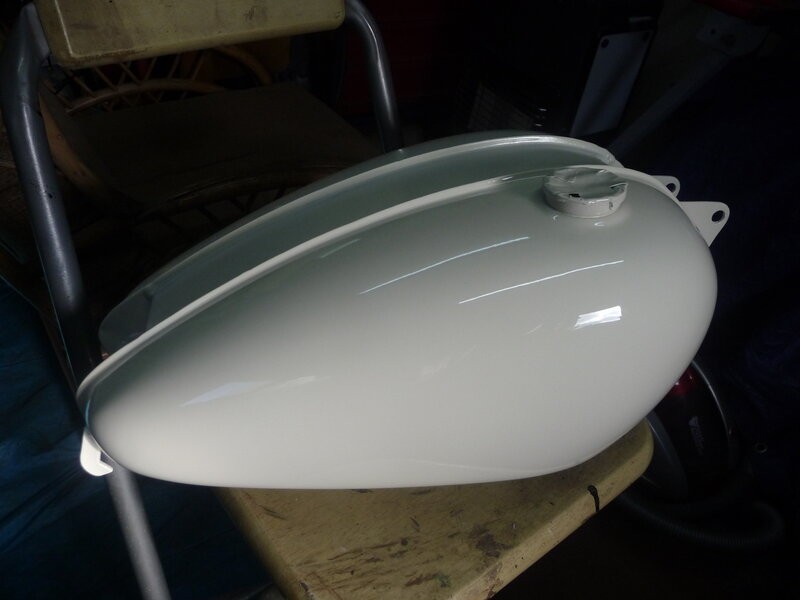 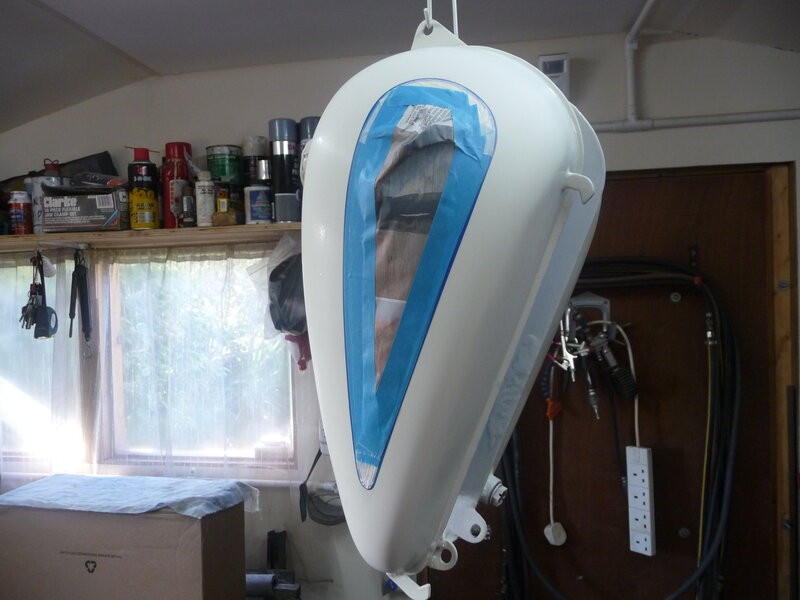 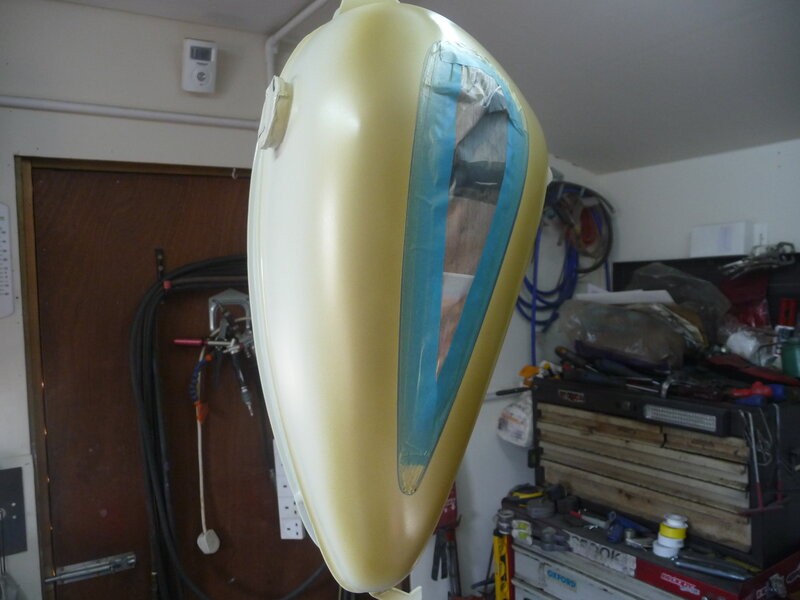 Ready now for the Maroon. 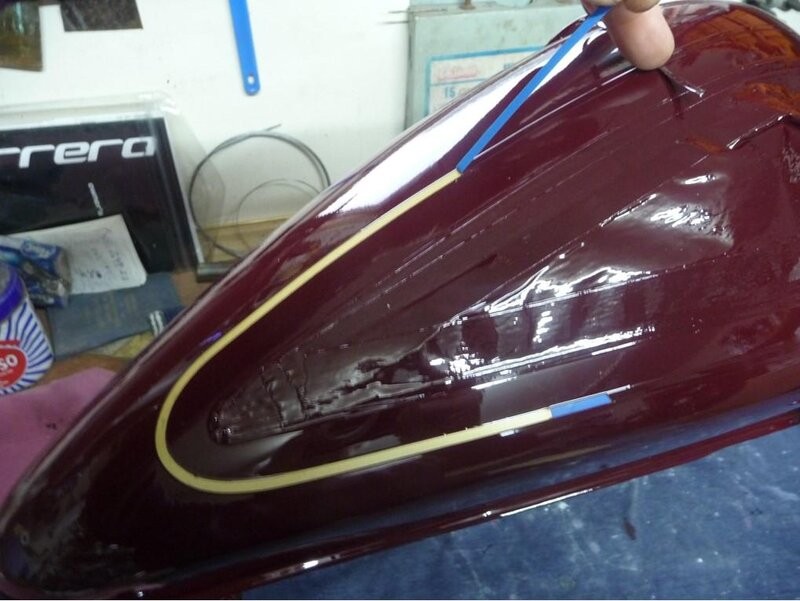 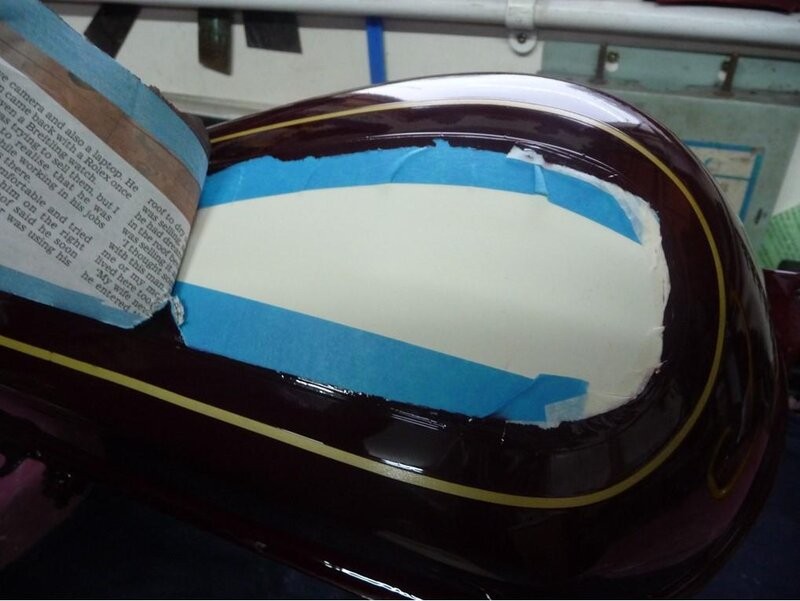 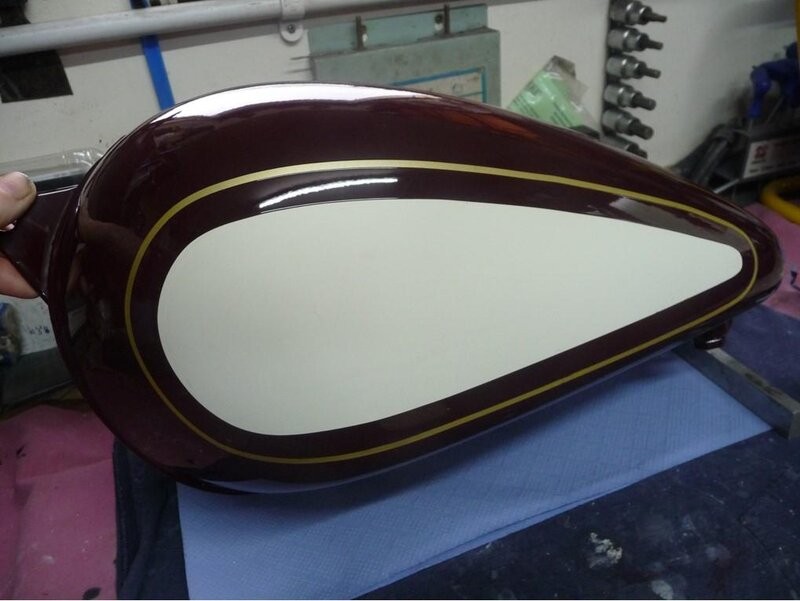 Leave it harden off for few days then flat it off apply transfers and lacquer.

But I'd be too frightened to use it now ..

So tank has now been flatted off and ready for transfers......... 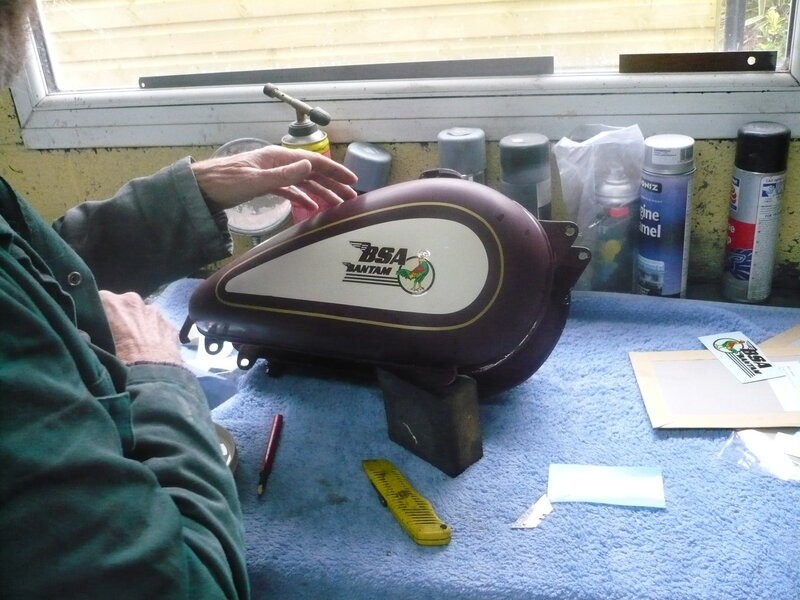 That went to plan and I think it looks fine, and some of the maroon parts are primed ready for top coat tomorrow. 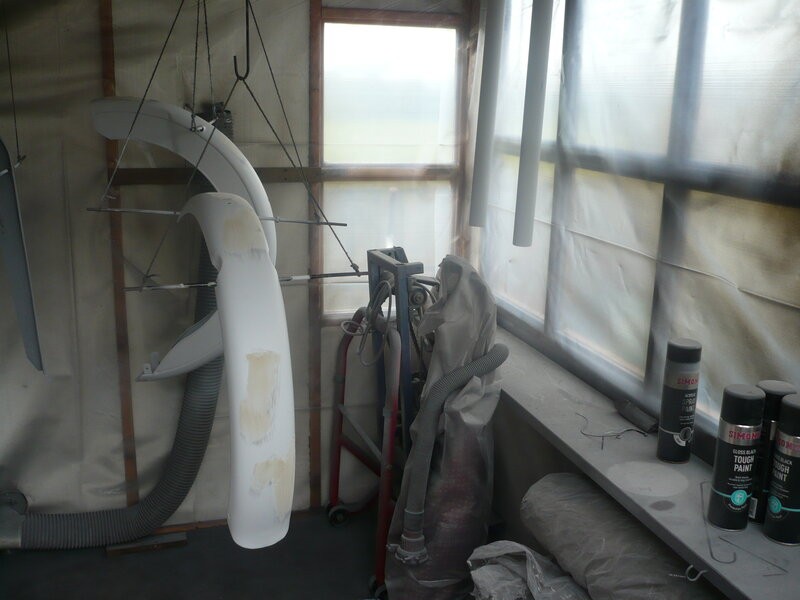 The hubs are ready for wheel building when I get the rims, the battery holder has been repaired. 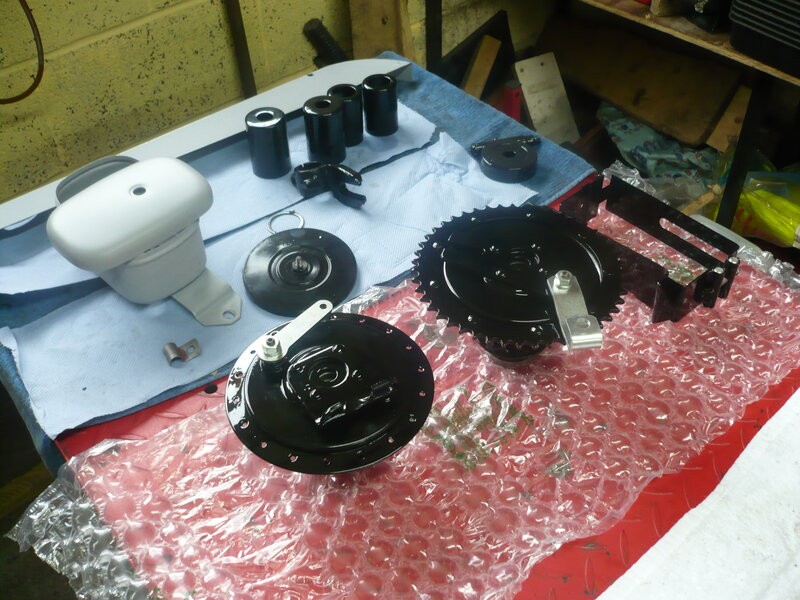 The resize photo thing I use has stopped working so I will stop here in case I lose it all.

Resize is working again but it could have been me. 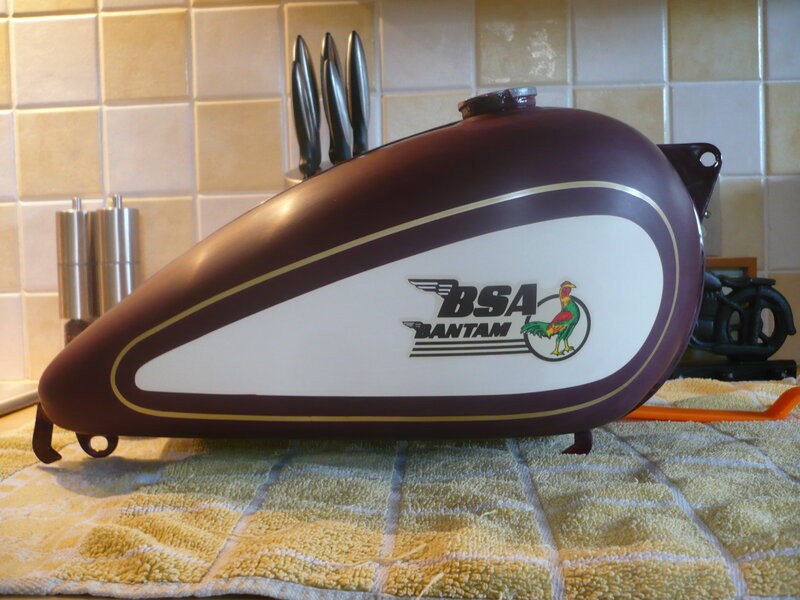 Battery carrier has had new hinge clamp made, looking good 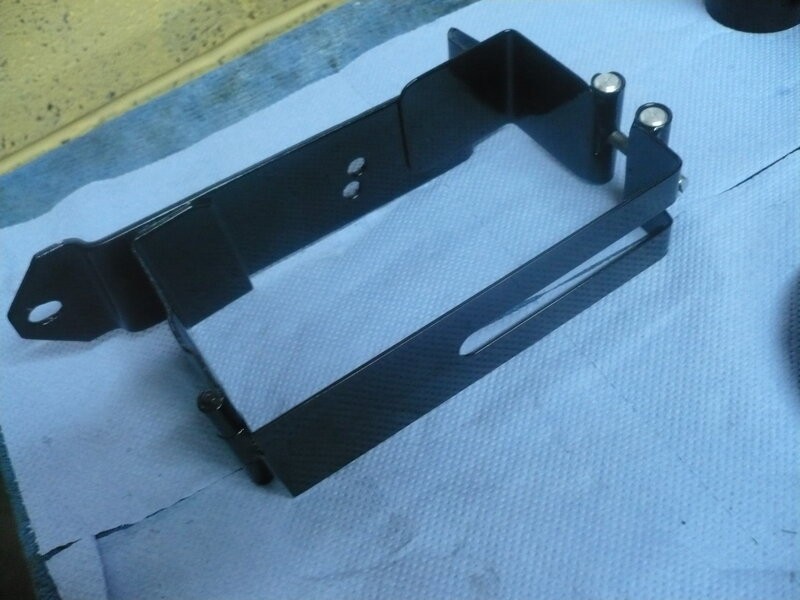 I drilled and tapped both handle bar lugs one side is for horn the other for cut out. 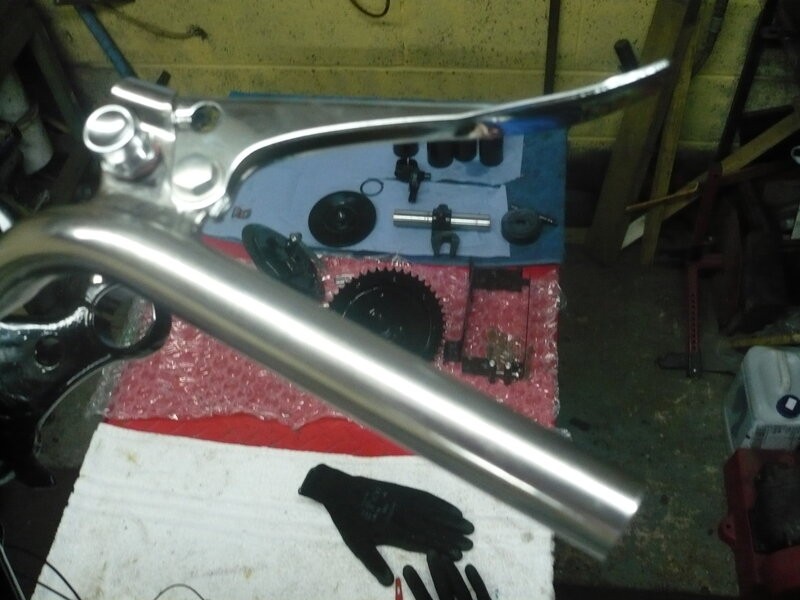 Superb work, loving the quality finish on everything!

Was the n/s rearward fitted side stand bracket welded on...looking at the bike pre strip-down, post No4?

Thank you for those kind comments.

The side stand is a clamp on type and MCA cast into it so they must have made it as an after market part.

Today Leon painted all the maroon parts except the mudguards which needed extra work and then he applied the primer. 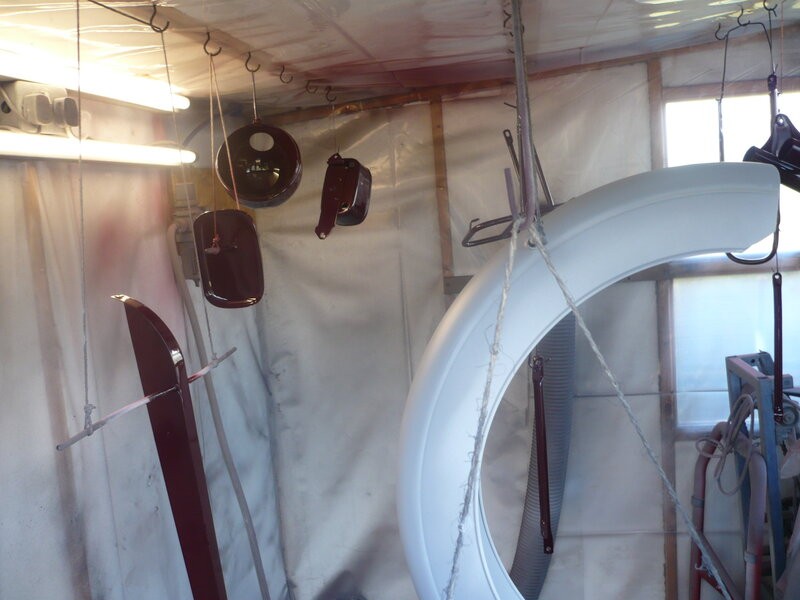 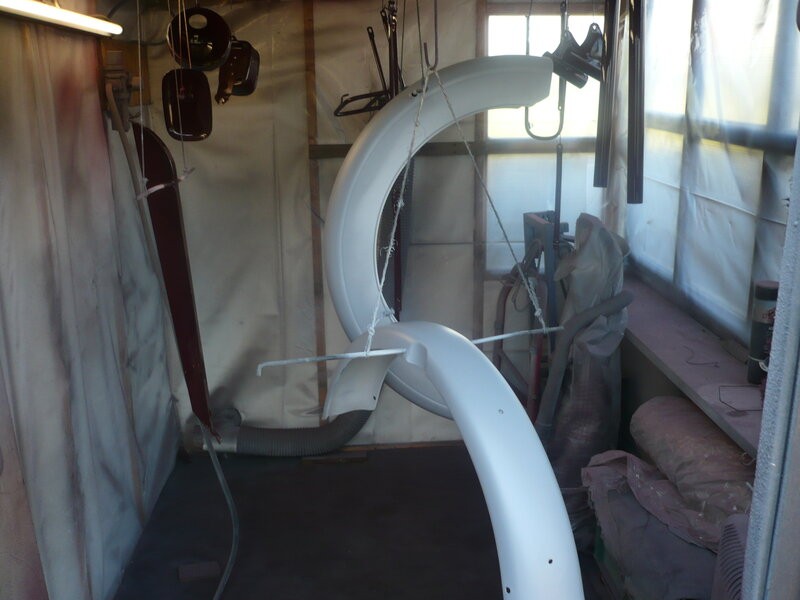 I finished assembling the horn after a total rebuild, it looks okay to me. 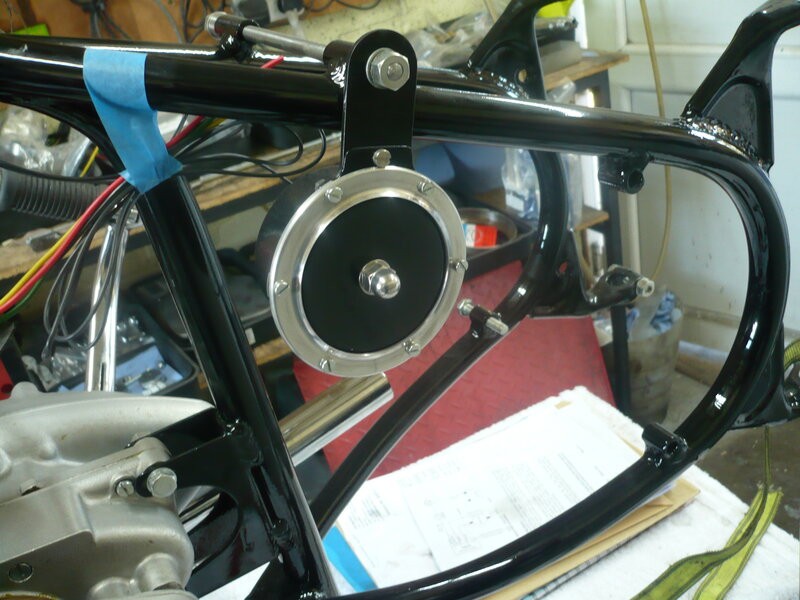 All coming along nicely.

Friday came around again and due to Covid rules this will be the last day working on the Bantam for a few weeks as Wales is now in lockdown again, Leon gave the tank a top coat in the week and it looks very shiny........... 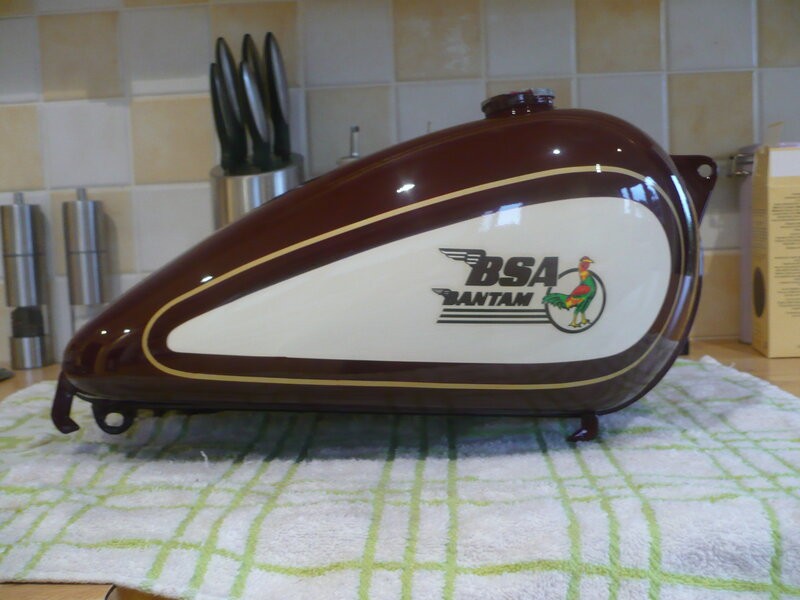 On Friday he painted the mudguards while I fitted the toolbox and battery holder all went together nicely. 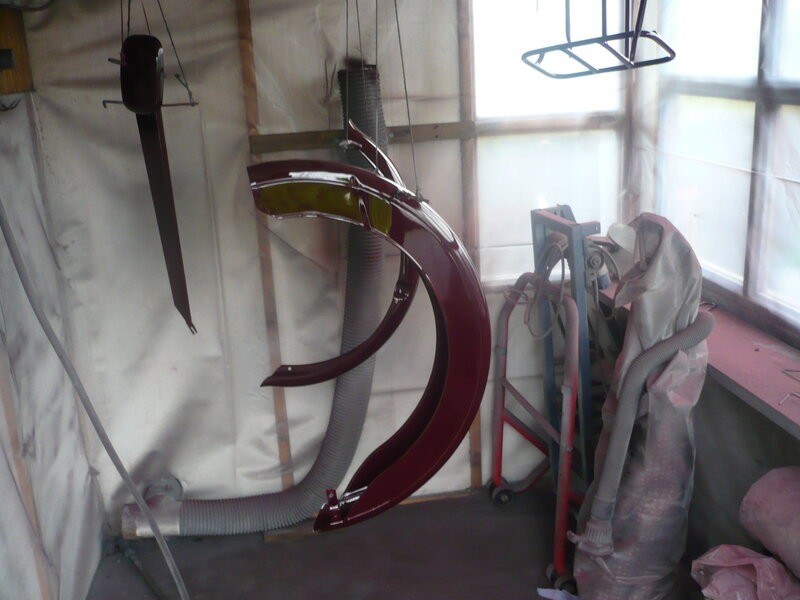 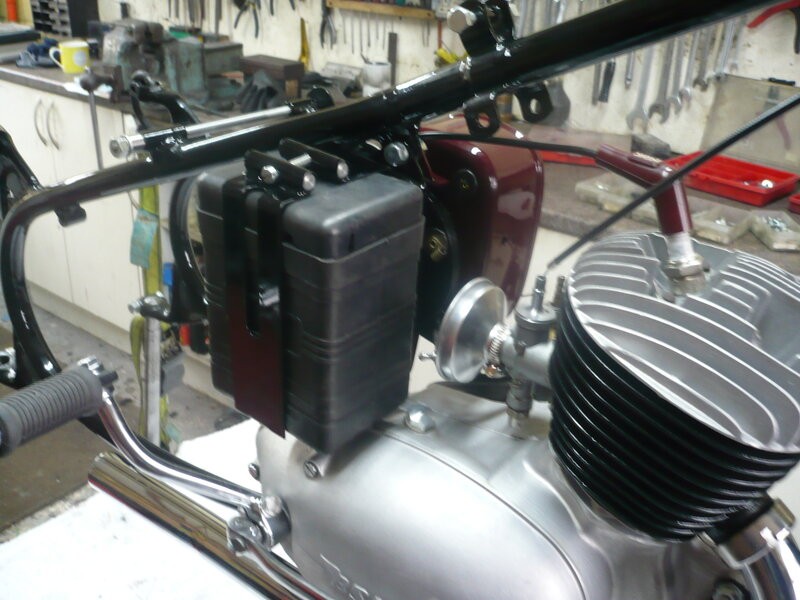 We then fitted the forks and headlamp. 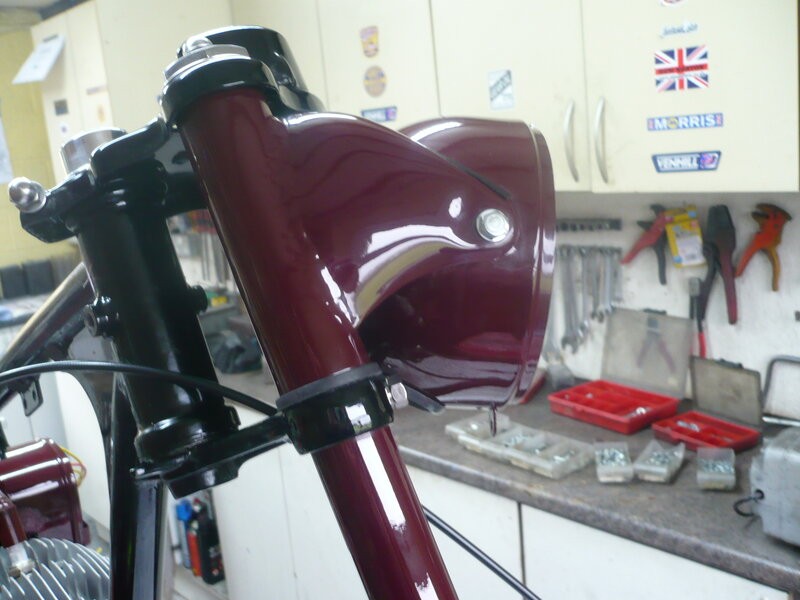 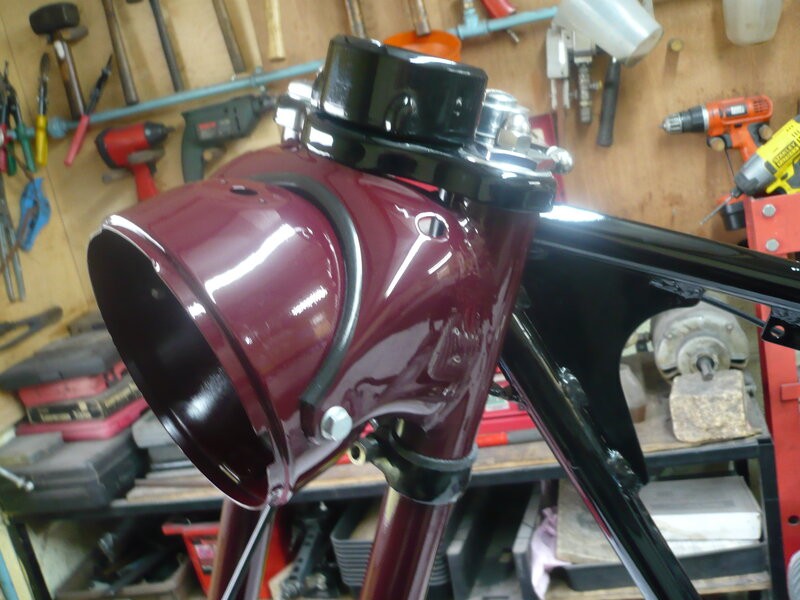 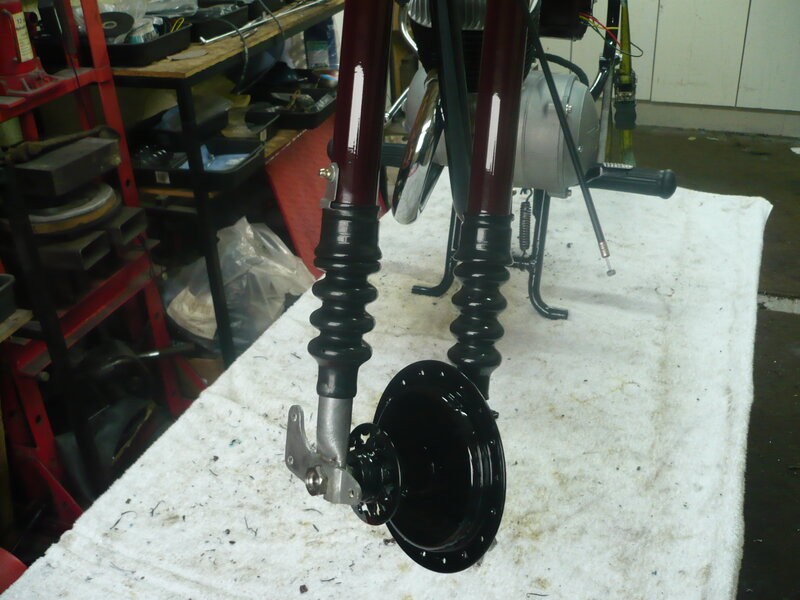 So that's as far we've got and it will be on stop now for a few weeks but no big deal as we are still waiting for rims and for the re-chrome parts, okay guys take care and stay safe.

Looking really nice Colin. Q: Are all the fasteners new or have you had the originals re-plated?

All fasteners are new zinc plated from Nooky's nuts and some like the dome nuts I have made from stainless just to brighten the bike up, Leon likes a bit of bling !!! 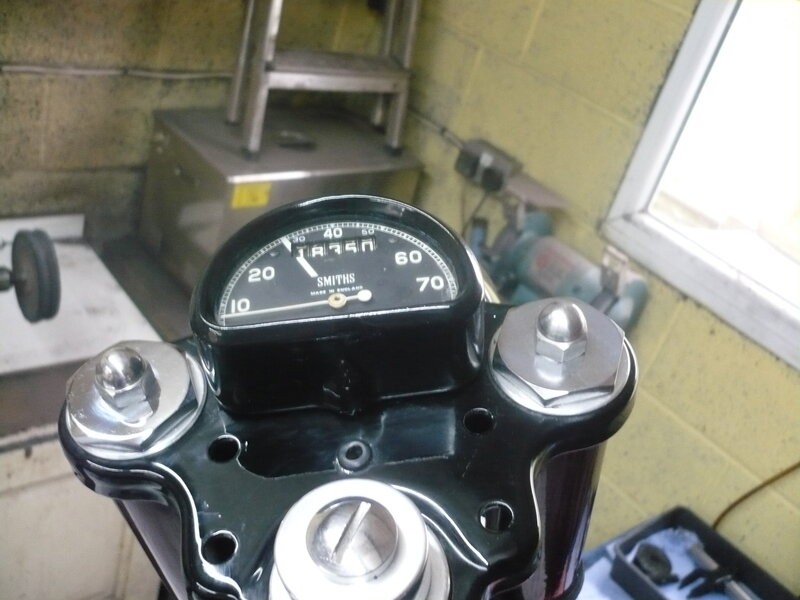 Do you two fancy doing a repaint on my D1 when you’re finished with this one and you’re bored? 😃