Some years ago I bought a 125 engine. When it arrived it appeared to have never been apart, no screwdriver marks on the screws, just a couple of broken fins on the rear of the head.

I stuck it in the then-empty D3 frame, connected exhaust and carb and kicked it over. I was surprised to find it started easily, but puzzled by a whirring sound, which carried on for a while after stopping the engine. Decided this was due to a dislodged flywheel plate.

On taking the engine apart, I did, indeed, find a loose plate; also a piston on standard bore, so presumably low mileage. I decided to carry out some blueprinting before reassembly (search 'ferguson' in the forum for more info). Then time passed and I was occupied with other matters...

Now I am back into reassembly and have started by checking that I still have all the dismantled parts - nothing seems to be missing, so onto the next stage, refitting bearings. The originals are all still good, so I'm using them. I decided that rather than using a big mallet I would make something that I could use to either extract or refit bearings.

Looking in my junk box were several squares of 5mm steel plate, about 150mm square. One of these would fit across the edges of the castings to give a stable platform. Then found a 10mm bolt about 100mm long, together with several large diameter washers, bits of tube, to form packing. Finally a 10mm nut. These can be assembled to either pull a bearing out of a casing, or to pull it back in.

Now reading through the forum to familiarize myself with the procedure, then start the rebuild - probably after Christmas as we have visitors.

Photo of the extractor and further progress to follow.

May be looking for a suitable frame sooner or later.

Here are some 'before' photos. 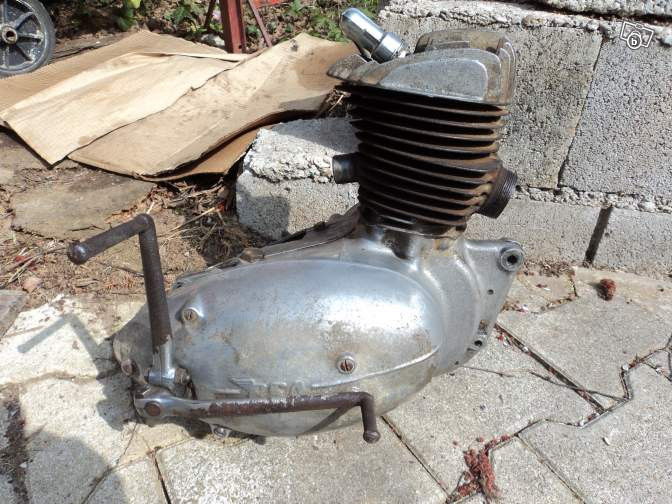 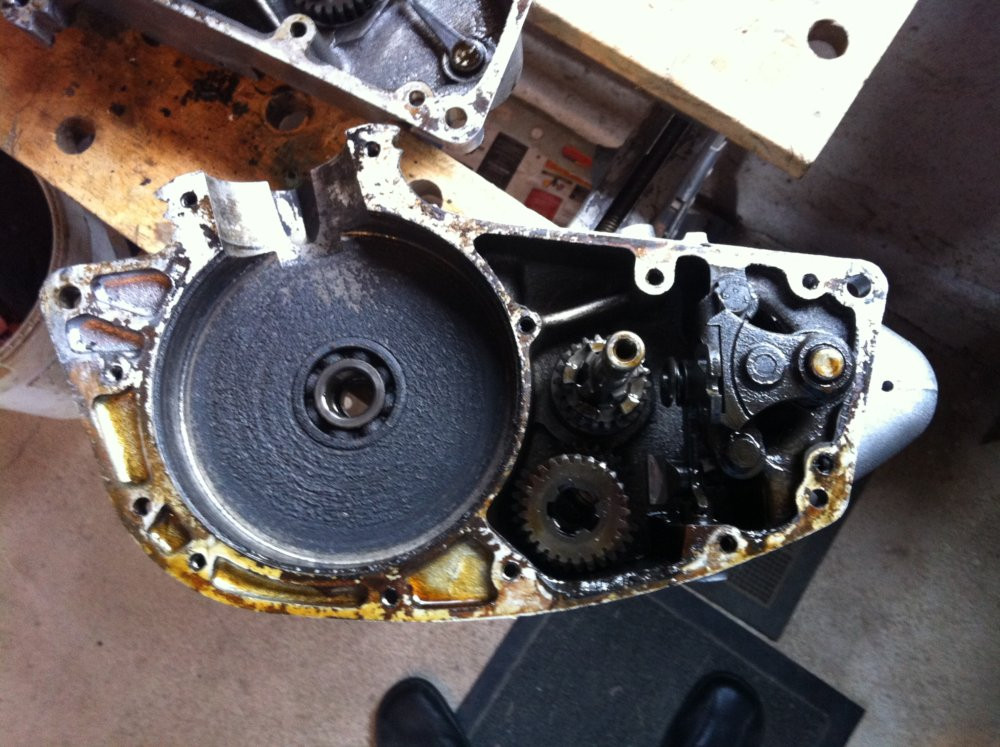 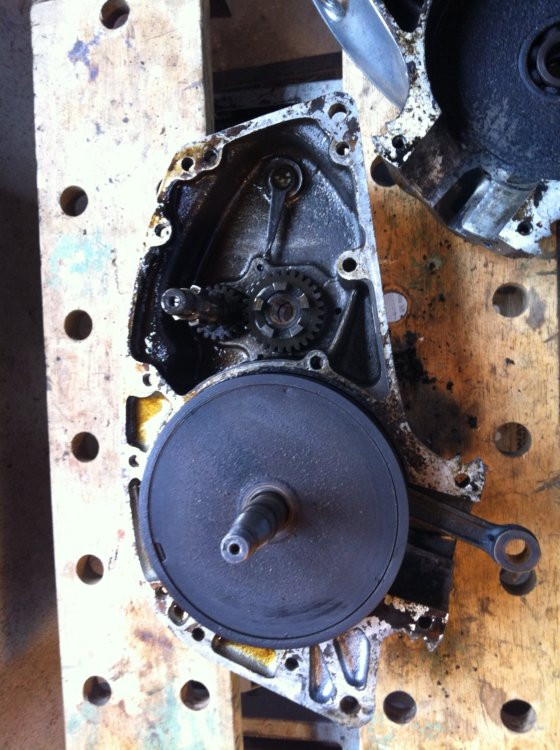 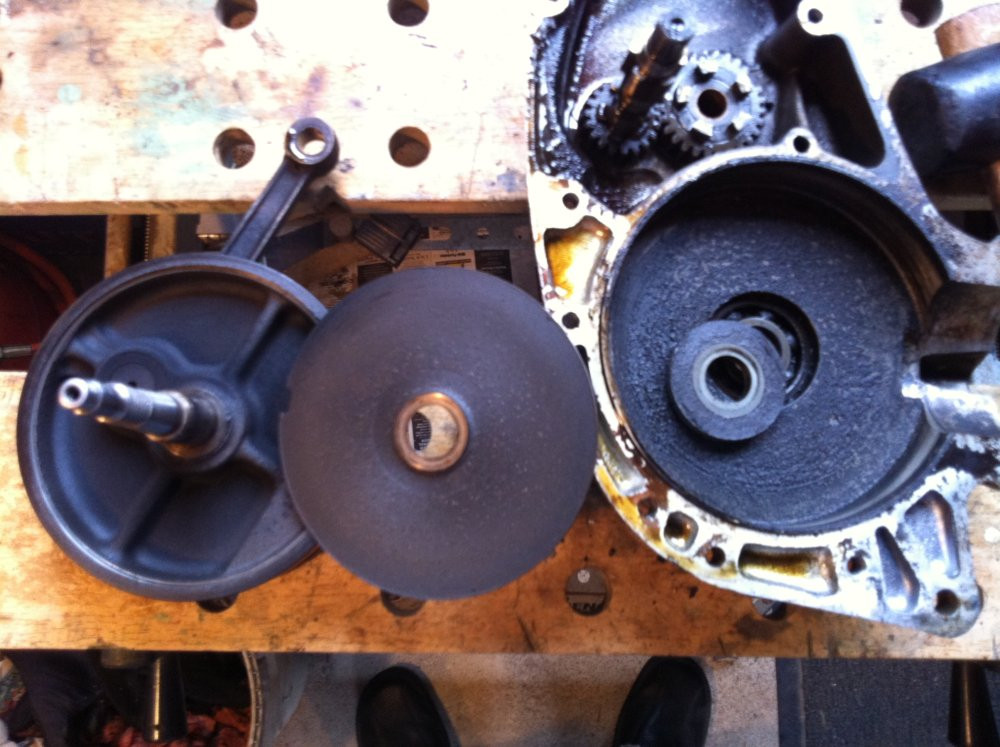 I wonder what oil was used at what mixture? Plus one completely detached flywheel plate.

Are you warming the cases up before you remove and/or refit the bearings? When removing bearings, if you heat the cases up to the point where, when you spit on the cases and it rolls around in balls, not just sizzles, then the bearings sometimes  will fall out by themselves, or, only need a light tap. When refitting bearings, heat the cases to the same temperature, drop the bearing in then tap to correctly seat. You have to be very quick doing this. I like the idea of using your pulling system, I'm just not sure that you would be able to do it quickly enough.

Thanks for the tip Wildun. It does work! I always warm the casings and freeze the bearings anyway, but usually use a large mallet. I find that my 'press', although slower than the mallet, is much more constant and progressive, but mainly keeps the bearing perpendicular to the casing, so gentler on the bearing.

I believe if you put the case on one of those camping stoves when the cases get hot enough the bearing just falls out.Never tried it myself.

I think that BSA quoted a temperature of 80deg C - certainly less than 100 - but then presumably they had all necessary presses and drifts. I am just trying to ensure that the bearings aren't damaged by the shock of mallet blows. From my work experience, I know that a large proportion of bearing problems can be attributed to faulty installation, rather than wear in-situ.

Here's a mock-up of the 'press / puller' in pulling mode. It was really easy to make, just a bit of scrap plate with a couple of holes drilled, and a suitable nut and bolt. Add a metal disc or suitable washer to fit the bearing and that's it. 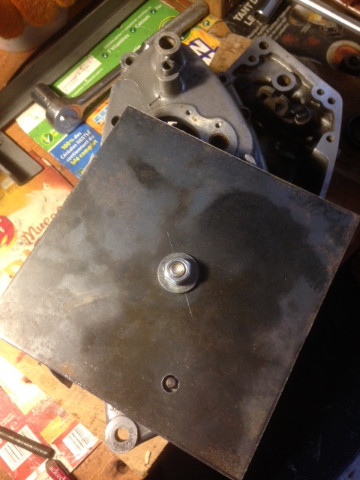 Plate on the outside of case - outer drilling to fit over a locating dowel. 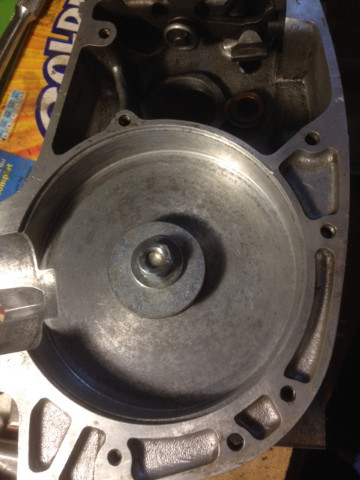 Bearing located over it's housing, socket wrenches on head of bolt and nut allow the bearing to be pulled in squarely and evenly.

On the subject of crankcase bearings :

In my mind I can see a hardwood thing, shaped to fit the bearing with the opposite end in copper to tap with a mallet - I could be wrong but happy to be enlightened.

Sponge said
...I have noted mention of a 'bearing pilot'...In my mind I can see a hardwood thing, shaped to fit the bearing with the opposite end in copper to tap with a mallet...
Sponge

A type of mandrel, possibly? Basically a length of hardwood, aluminium, etc with an outer diameter the same as the bearing outer, then turned down to the inner diameter of the bearing for a long enough distance to fit the bearing with a lead through the housing. Easy enough to make with access to a lathe. if hardwood I don't think you'd need a copper end as the whole point (for me) is to minimise the force applied to the bearing.

Anyway - I'll be using my mini-press, so watch this space!

Fitted the crank bearings easily. Heated the cases to 150C, bearings down to 5C and they pressed in easily, about 10 min start to finish. I've just had a trial at the end float, using the original crank and bearings; spacer and shims in place - but I still have around 2mm of movement (that's 80 thou). Hmm, more shims or something more drastic? The crank is now without flywheel plates, but I don't think they form part of the bearing surfaces.

Measured various gaps using inside and outside calipers against a steel rule and got 48mm crank width (outer bearing surface to outer brg surface), 55mm gap between inner surfaces of crank bearings, spacer washer 6mm, plus the thickness of the 4 shims, 2 each side. That adds up to 54mm plus shims for the crank, 55mm for the case, leaving something under 1mm, so where does my 2mm come from?

I'll have to go and check again!

EDIT - panic over, guess the thickness of the flywheel plates? They are about 1mm each, and also cover the whole flywheel, with the shims sitting on them. So, next decision, do I refit the plates or look for a couple of 1mm shims.

Maybe you pressed the bearings in a little further than they were originally?

I'm certain the crank plates will have nothing to do with it as the crank is shimmed between the crank end and the inner race of the bearings.

Sorry coco I got a bit confused there.You are correct the shims actually sit on the plates on that crank looking at it.Only ever played with a d14 one good job.

Something to add to the "flywheel plates - remove or replace" discussions.

SpacedMarine said
...You are correct the shims actually sit on the plates on that crank looking at it.Only ever played with a d14 one good job.

Yes, it's a pity I didn't look more closely at the 'before' picture with the dislodged plate!

More comparison of the plates fro the D1 and D3 today, they are completely different. Picture shows D1 plates above, D3 plates below. Left hand side is the outside of the plate, you can see that the D1 plate is dished centrally to sit on the crank boss - thereby giving the extra float when they are not fitted. The RH D3 plate is the one that was damaged, the fact that it is not centrally located like the D1's allowing it to spin around the shaft off-centre. Interesting that the D3's are much dirtier than the D1's, not evenly distributed, either. 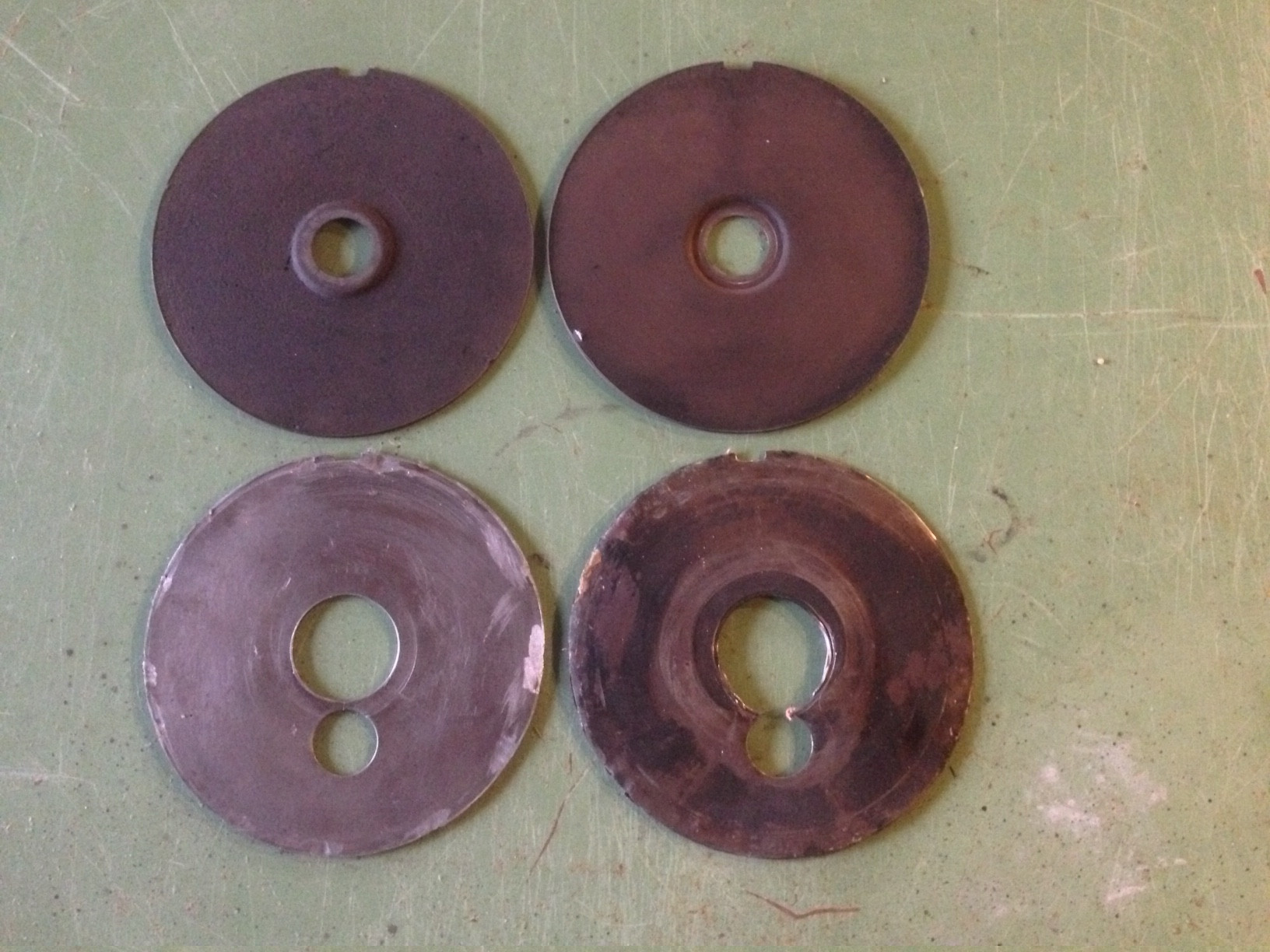 This photo shows how feeble the peening of the flywheel outer face was. No wonder they came off! (sorry, it's a bit blurred) 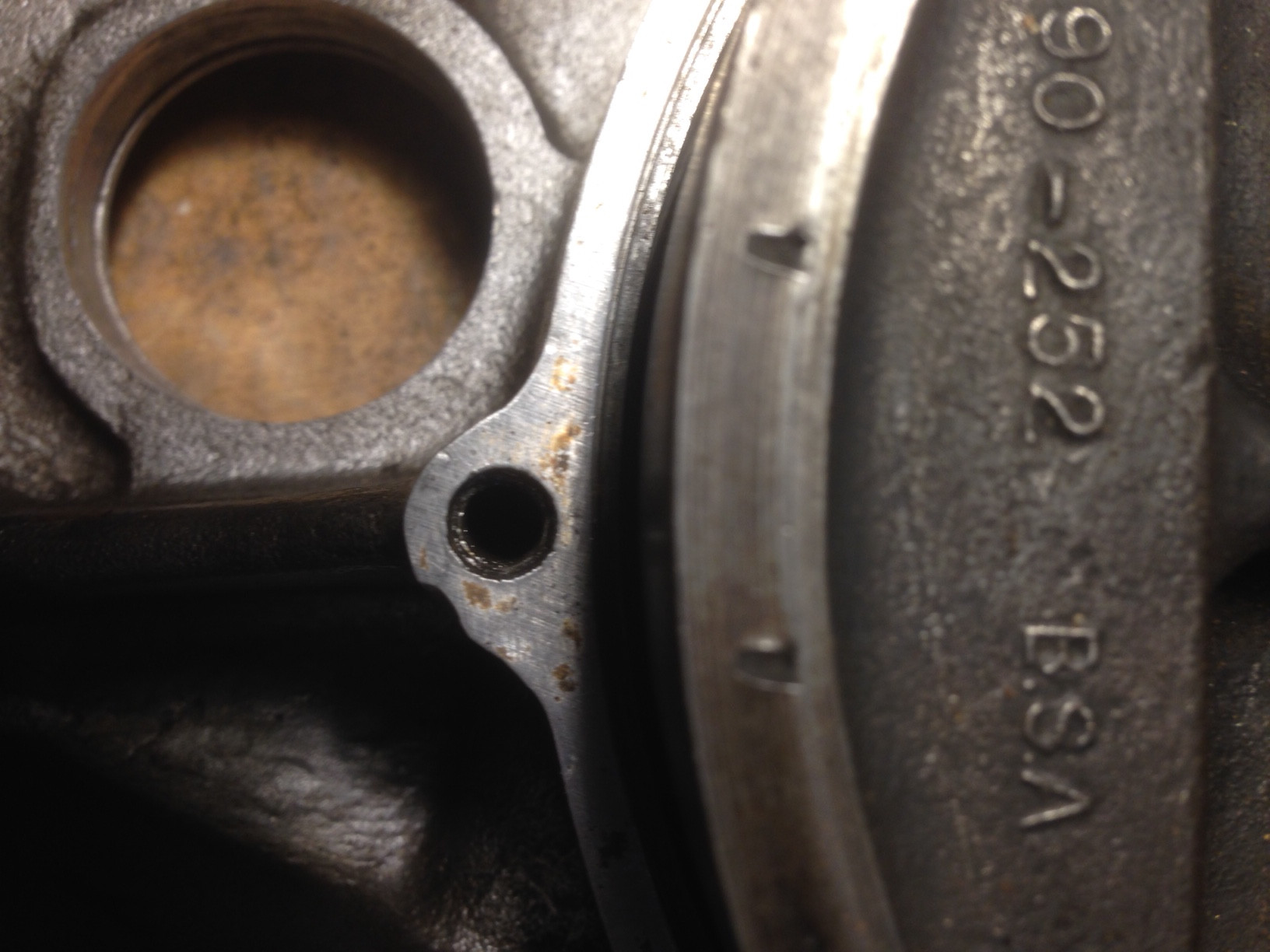