I started a thread for this on the old forum - and am trying to restart it here.

Back in 2003 my Dad and I stripped our D7 and had everything painted or powdercoated - sadly serious illness stopped us in our tracks and we are only just getting back round to it. The difficulty is whether bits have been lost and that we have no memory of where all the fasteners are!

So kick starting it back in - I started off by drifting the swinging arm pivot back in after a lot of work to make the bushes super smooth: 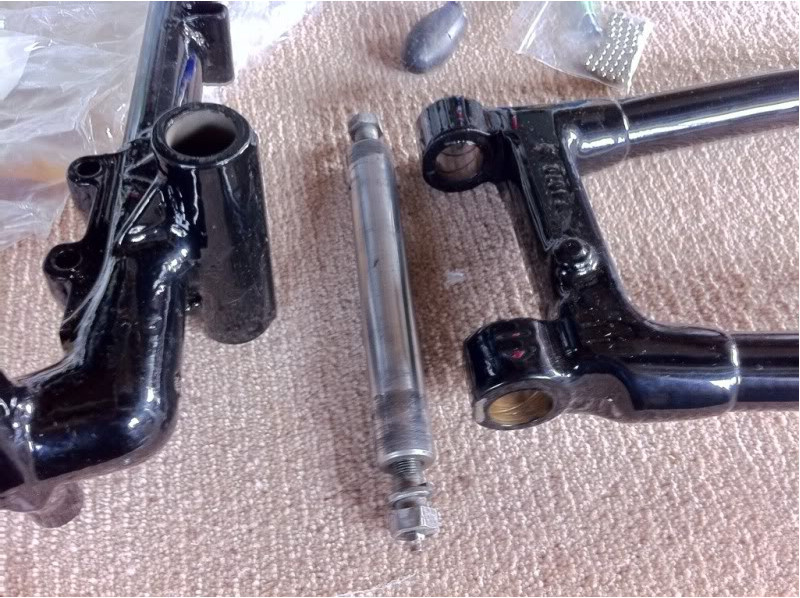 The smoothness is demonstrated here 🙂

Following that - I bought a parts manual (which wasn't as good as clear as I'd hoped), and working with the excel fastener database (in the forum tech tips section), I made a list of a load of fasteners and ordered them through Namrick. Great service, though a few are not the thread we specified so I'll need to go back to them on that.

We also bought a nice shiny pair of new shocks too 😀 .....So the big bolt together has started.... 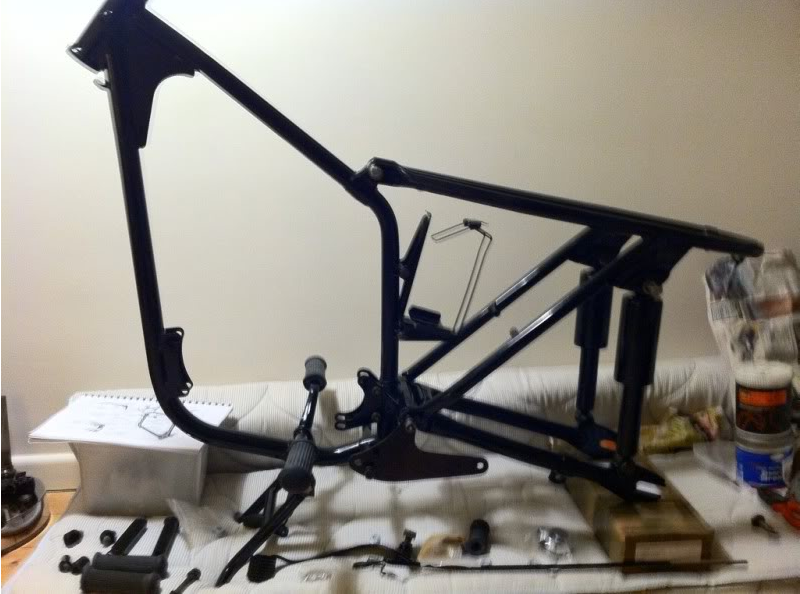 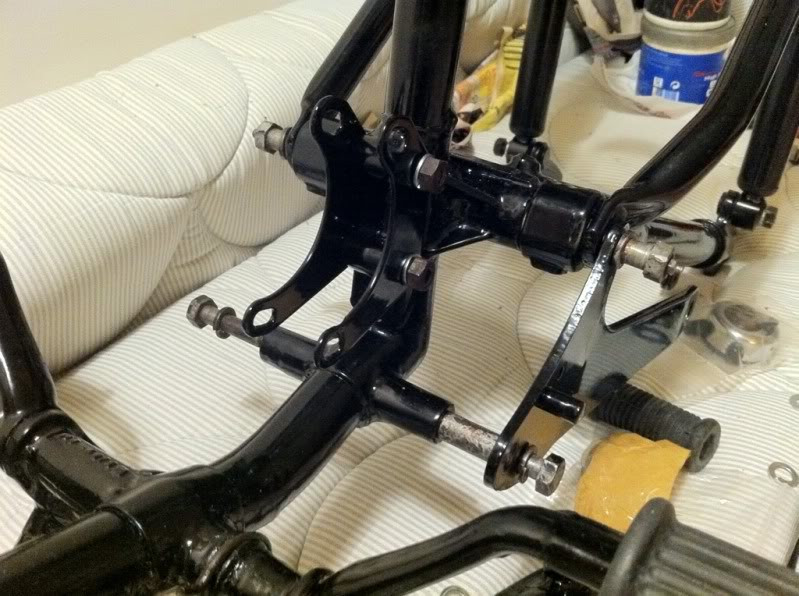 Long way to go and lot of the parts in the pictures are just loose, and some require bolts shortening, but it feels great to be making progress after so many years!

Looking very good!
Make sure the bolt have a bit of loctight on them.
You have no idea how many bolts are slight loose after 1 year of daily driving!

Small progress continues to be made - held up somewhat by a lack of the right bolts!

The pillion footrest nuts are a CEI thread - as are the 4 bolts for the fork bottom clamps and the top shock bolt and nut. Hopefully some on the way to me shortly.

Bizarrely I've also lost the passenger side footrest plate. I've definitely had it, and had it powder coated .... but its gone. I'll wait a little while to see if it turns up, but failing that I'll need to try and buy another one (anyone?).

Very pleased with how its going though 🙂

I'll post some more pictures as the front end starts to come together.

hi, looks well nice, just one thing, to be bang on the bottom half ov the rear shocks need to be painted silver! good luck with the rebuild!

p.s. i have footrest plates

Success - the footrest plate has been found 🙂 it hadn't been put in with the rest of the parts to powdercoat - so its to be done now. Thanks for the heads up on your spare though Baker Man.

I'm not too worried about the originality being perfect - so will keep the shocks in their own factory finish. The paint isn't standard either - the tank's chrome was ropey so the whole thing was keyed and painted.

I've been in touch with central wheels to have the hubs blasted and powdercoated and then rebuilt with stainless rims and spokes. I've asked if they'll coat the bracket too - there's also the bottom fork clamps to do too. I'll post up some pictures when that happens.

I still seem to be finding little bits that are missing - current ones include the chrome halo for the light and the top taper head race... Hopefully they will turn up. The head race is really needed next to build the front end.

I bought a few parts from Charles Field which turned up so progress could begin again. 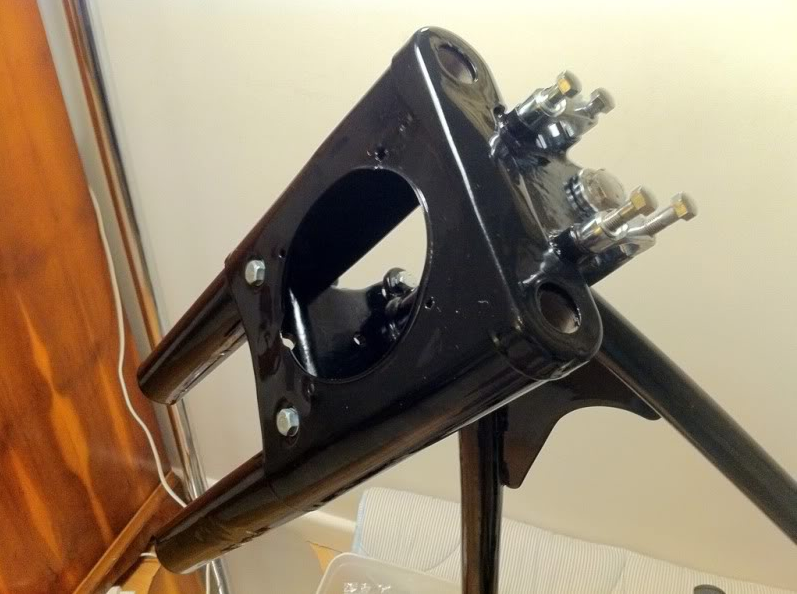 I'd forgotten that the shroud was more than a little battered! I have a shiny new halo / headlight support ring and its shown how out of shape the shroud and headlight 'bowl' is. It'll be quite a challenge to get it to all line up. I'll think I'll give all the joining faces a smear of grease and bolt it up off the bike, seeing if I can slide things into position. I just need to get 4 new small nut and bolts for it.

Also fortified a box and packed the wheels up, almost ready to send off to Central Wheels for a rebuild. Really looking forward to them coming back!. 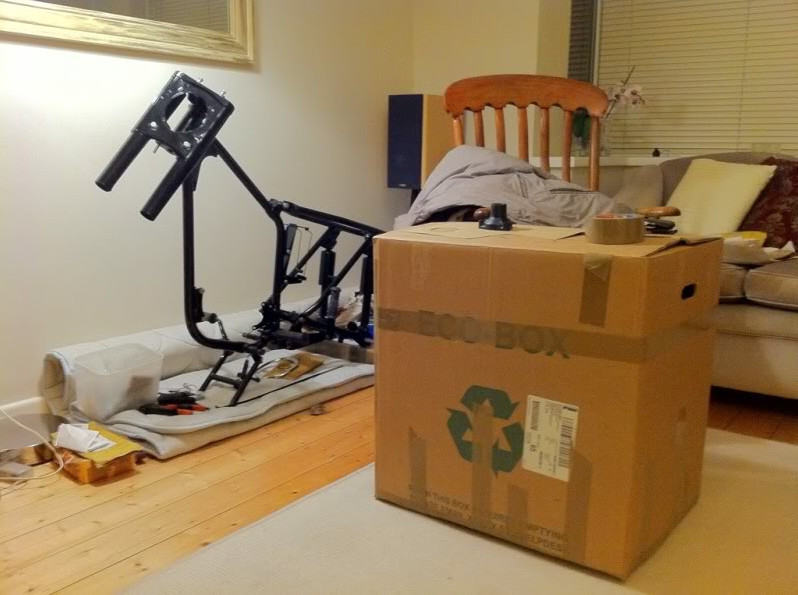 Still lots to do with the bike and I keep seeming to find little bits of things to buy, but it's looking good 🙂

Wheels have gone - which is good 🙂

Progress is somewhat halted at the moment though as I've lost the front fork seal holders - the little chromed screw on caps that the seals sit inside....

After the recent forum weirdness deleted a few days worth of posts - I shall endeavour to recreate my update.

I have followed Regal Raptors method for de-rusting the fork springs ..... I've also dropped a few fasteners that I won't be replacing to see how they clean up. Not sure if I can use it on chrome? or if it froths up though?

The other job almost done is assembling the nacelle. The shroud has been (badly) welded at some point and along with the headlamp shell has become quite distorted. So when I purchased a shiny new halo (backing ring in the parts book I think) I was concerned if I'd be able to get it all to line up and fit neatly.

A liberal covering of all the touching surfaces in grease, a bit of twisting and cajoling and pushing the bolts through has done it though. I'm leaving it to 'settle' as its all under a fair bit of tension - and then I'll nip it all up and it'll be read for fitting. I'm delighted with it 🙂 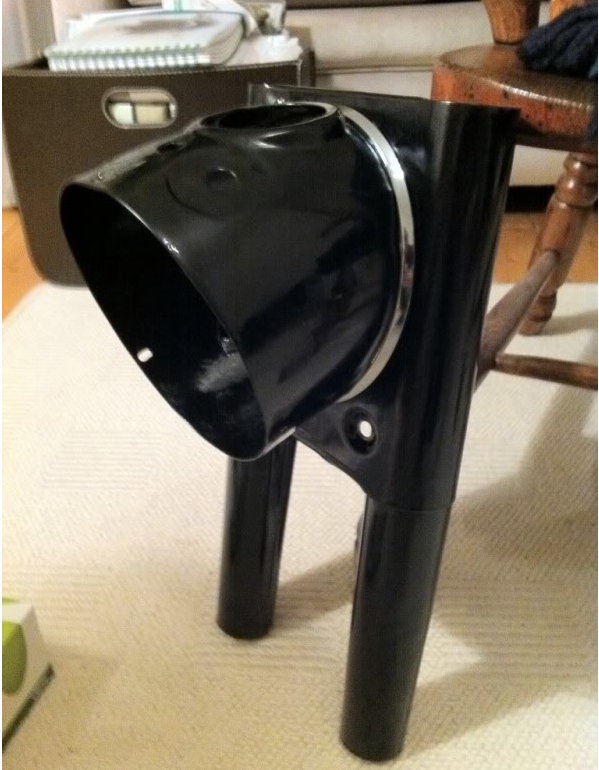 This is my before picture.. 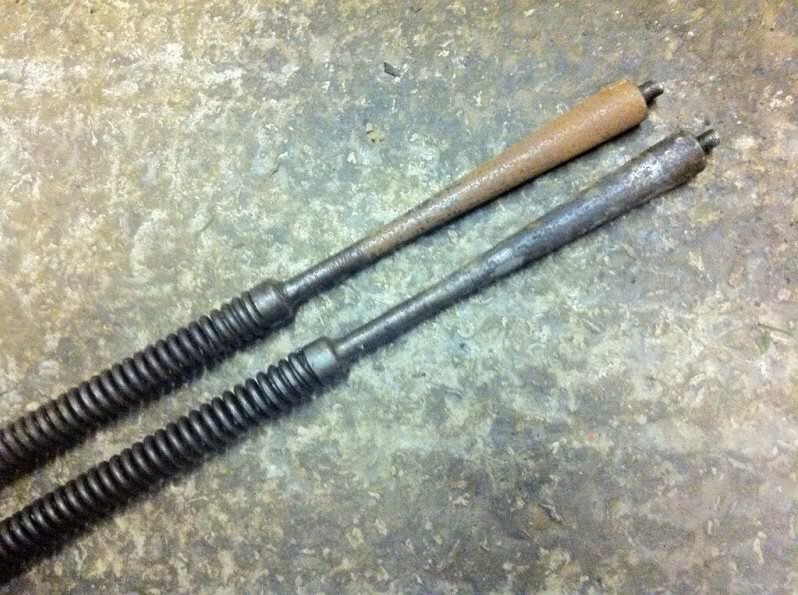 Wow what a difference ..........this seems to really work well..........the least contamination the better ! I believe the way forward with these little bikes is to reuse as much as possible it would be too easy to buy new parts.....well done

Latest update with a few questions on rebuilding the front end if someone would help out please ....?

Thanks RR for you comments - I also like to re-use where possible. Besides the Bantam I have a Series1 Land Rover and I've seen a lot of those restored replacing as many parts as possible with a NOS or shiny reproduction - the end result is so many original useable parts are discarded that little of the vehicles real identity is retained. They end up better than they emerged from the factories and with all of the 60 years of history removed. I like the vehicles to retain their story to some extent and a nice original patina is a good look 🙂

Back to the Bantam though. I put both fork legs in twice and a number of smaller fasteners. The rust remover did a nice job, obviously its not like blasting or professional chemical stripping - but I'm pleased with what its done. I also put a few chrome parts in that had patches of rust on - and it removed the rust but left the chrome undamaged.

I had placed an order for new seal holders but then found the old ones - they're not pristine, but as said above they are original and serviceable and the money saved can go towards missing parts required to finish it.

I've located the springs in the fork bottoms - a tiny bit of copper-slip on the threads and they screwed in nicely. The caps and seal holders are just loosely on to keep everything in one place. 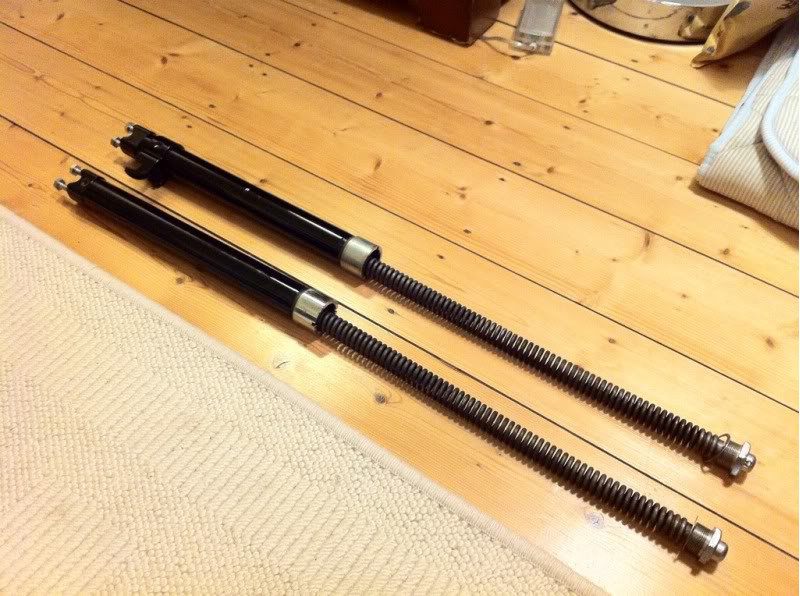 Very pleased with the finish and how clean the springs came: 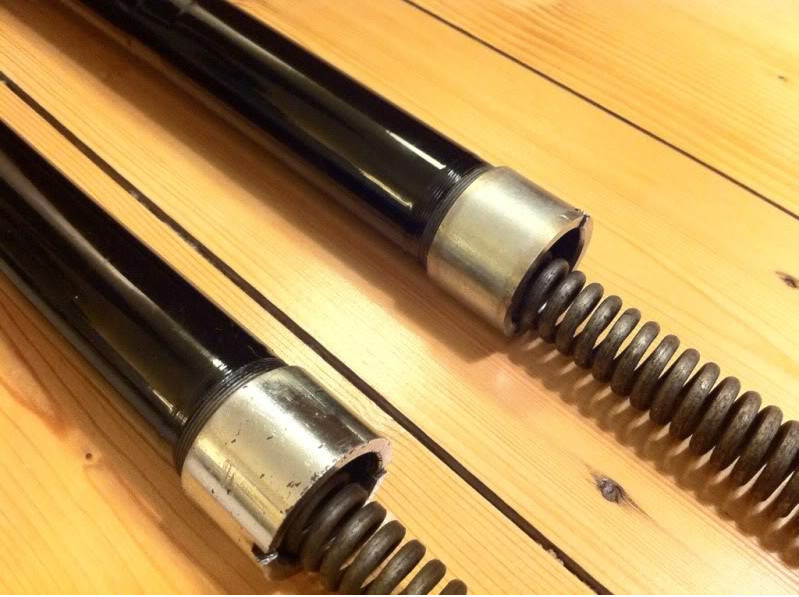 Pretty much ready to reassemble the front end now. I've put the drain 'bolt' in with a new fibre washer and bought a new nut for them to mount the mudguard stays. They are 1/4 CEI apparently and I've non of those. I bought the Asda 20/50 super cheap oil - the front end was always a bit too soft so I'm hoping that it was being run on thinner oil (or the oil was just so old it had lost all viscosity) and that this will firm it up.

I'd appreciated comment on if the following seems right ......??

I'm planning to adjust the head bearings and pinch them up with the pinch bolt before I fit the shroud and fit the fork legs. Then build the fork legs complete except for the top nuts - making sure to put the mudguard clamps on before the seal holders go on. Then slide the fork stanchions up through the yokes, slip the washer over the top nacelle cover and fill with oil. Then seal with the top nut and tighten the bottom yoke pinch bolt at a height where the top nut holds the top cover down snugly.....

Does that sound about the right sequence guys? I've never rebuilt a shrouded front end where only the bottom yoke has pinch bolts to hold the stanchions......

Possibly only me reading this!? 🙂

Had a bit of a set back in assembling the forks - somehow grit had got in the fork legs and in trying to slide the stanchion in it scratched the bush and the inside of the fork leg. I was able to wrap some very fine wet and dry around the stanchion and then doused in wd40 use it to polish the scratches out. Then endless washing with various cleaners and the airline brought it back to a good level. A final clean in hot water with a bit of detergent and the whole thing was silky smooth again. Phew!

Good stuff,Zander...... Getting a lot further than I am!

Worked on the D7 tonight putting the forks in - 98% there. The new head bearings turn beautifully smoothly 🙂 Getting the stanchions up to flush with the top yoke though was very difficult - got both to around 3mm from flush. If I pushed from the bottom the fork springs just compressed so the only way to push up was to grip the stanchion and twist it through. So I'll try again tomorrow when I have the strength back in my hand to finish it off. 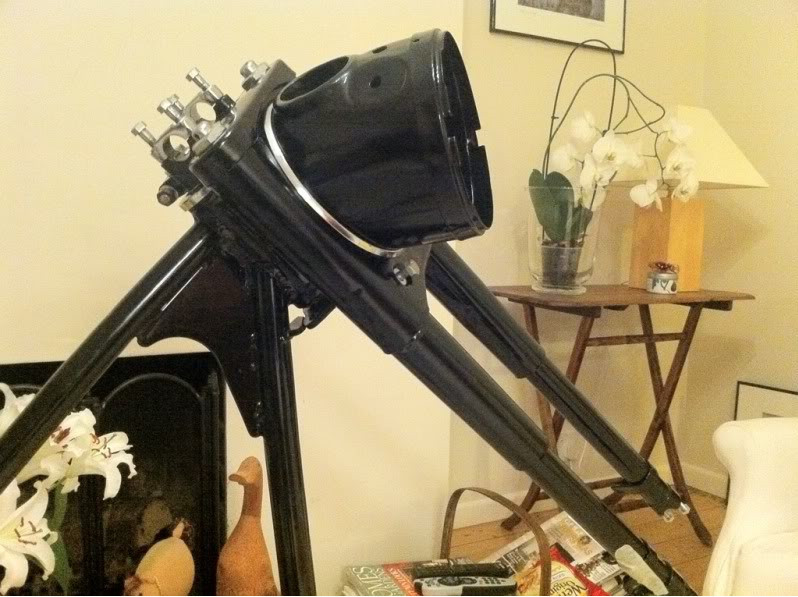 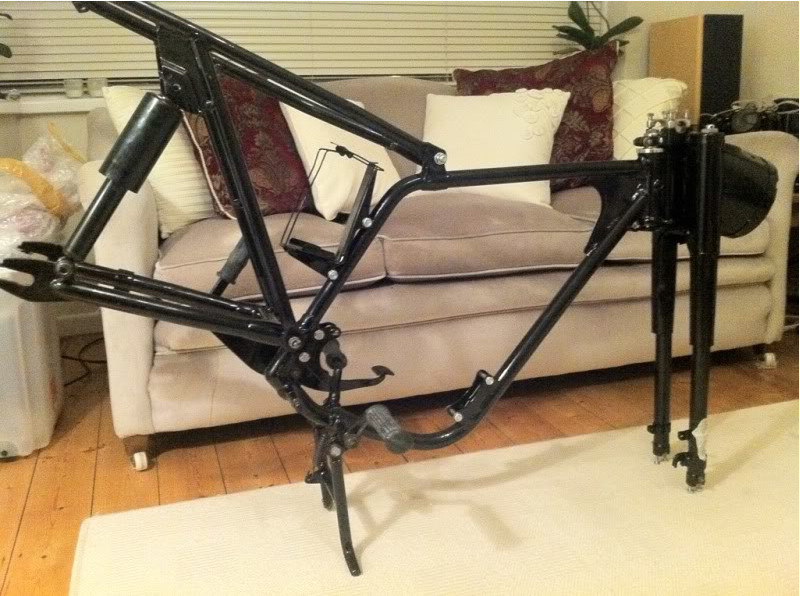 Very pleased with the way its looking - getting the forks back in felt like a milestone as it now looks more like a bike. When the forks are bolted up I can fit the mudguards which will be a turning point: when I finally get some colour on to contrast with the black.

Where did you manage to get a set of head bearings? I once found & bought a set (for my D1) off flea-bay, but the seller pulled out claiming lack of stock (and fully refunded me). I've not seen anyone selling a full bearing kit anywhere else - at least not the shells/cups....there are plenty of people selling the balls. I'm not yet in need of new shells, but it'd be nice to have a set on stand by...

However I've noticed that Chas Field, who I heartily recommend, has cups, balls and dust cover in for the D7 - perhaps also for the D1?

Some more bolts turned up today - including two for the top of the shock meaning the first bit of tinware could go on: 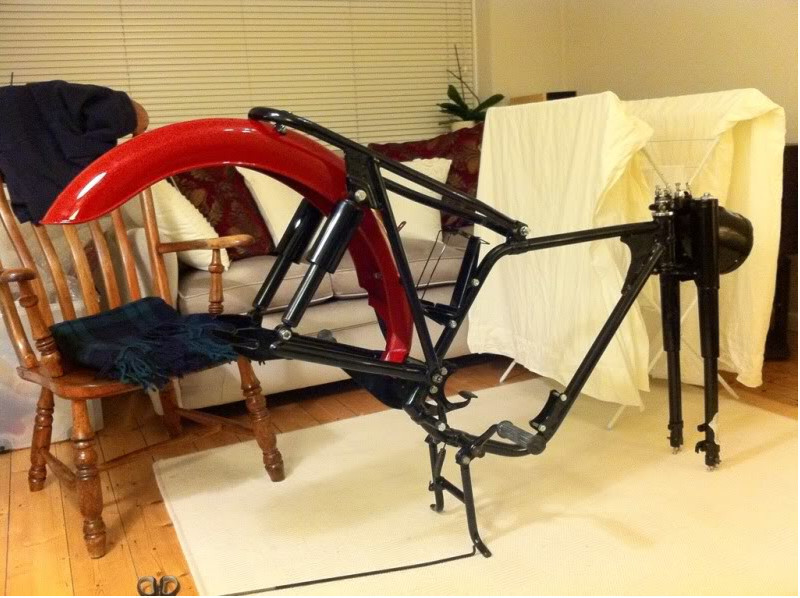 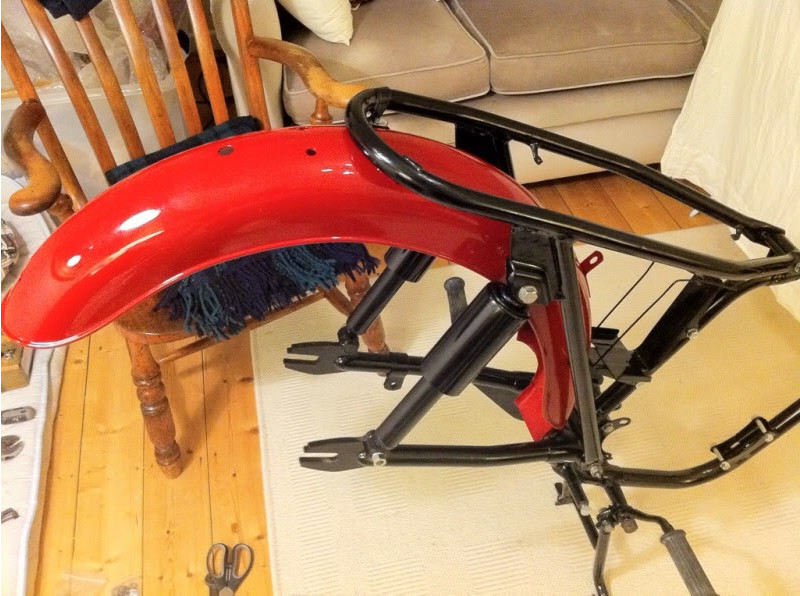 It took a lot of twisting and pulling to get the holes to line up, no idea why as nothing seems bent? but now its done I love how its looking 🙂

A little more progress with the D7 - starting to look like a motorbike now! 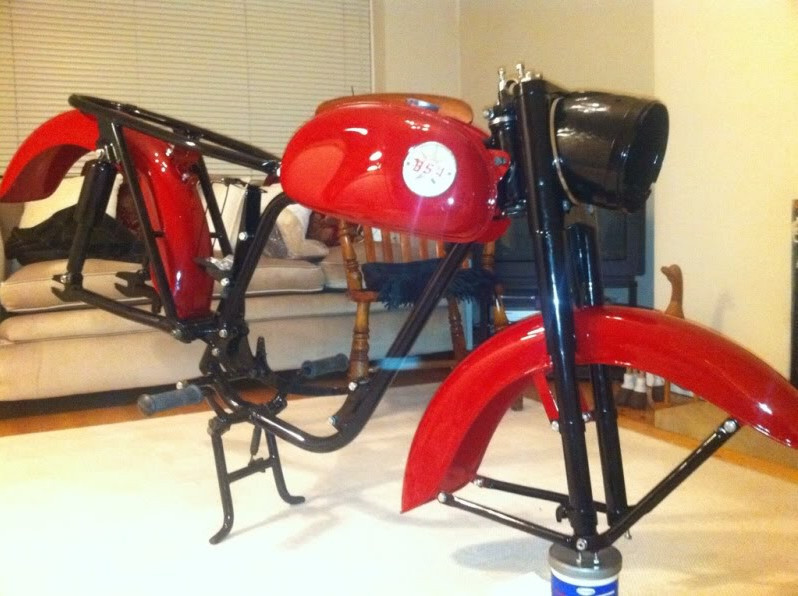 Its also starting to get heavier to lift around..... so I won't be putting the motor in until the wheels come.

The next step will be to build up the brake plates and sprocket ready for the wheels - which sadly may be the end of the month.

There is also plenty to keep going with - build up the nacelle with switches, the light and bulbs etc. There's things like the fuel tap and so on too.