Nice job, just come in from the garage, had the vinegar in the fuel tank for the last two days, did a cracking job not perfect but a huge improvement.
Last thing I was doing was drying out the inside with a hairdryer ! well it works.

I'm delighted with the speedo - only issue is it makes the rest of the bike look scruffy now !

Yes vinegar is certainly the future although the road outside my place now smells like a chipshop, know what you mean about getting parts all spick and span, that's how my Stafire got to be a really smart bike, my original intention was just to get a mechanically good runner that looked reasonable but you do one bit then another and so on .....

Re-wiring is the current activity on the D1.....

I replaced one of the wires to the dip switch and have wrapped it in a nice old looking cloth tape... 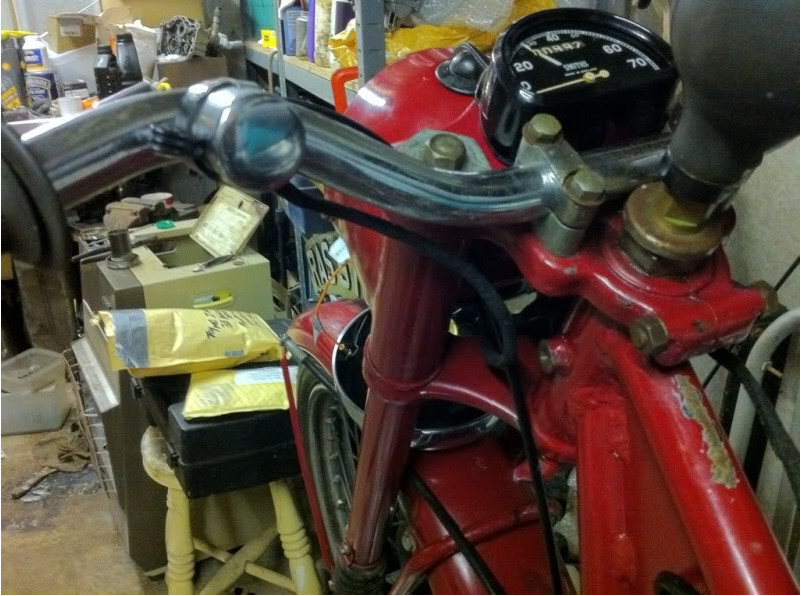 New wiring going in and a new grommet for inside the headlight shell (the original one had turned into Bakelite!) Painted the inside of the shell with a rust killing chemical and put a coat of black paint on the back of the headlight reflector. 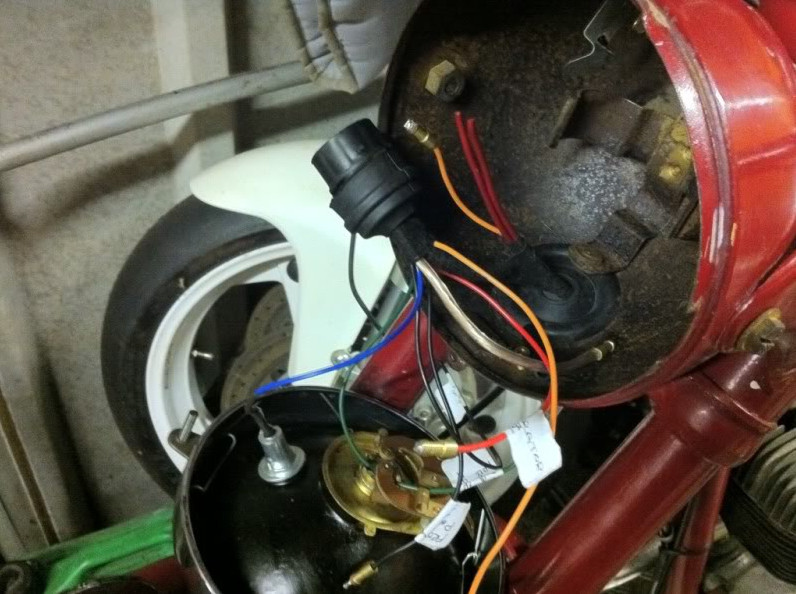 Cloth covering on the ignition wiring, running up the back of the carb. 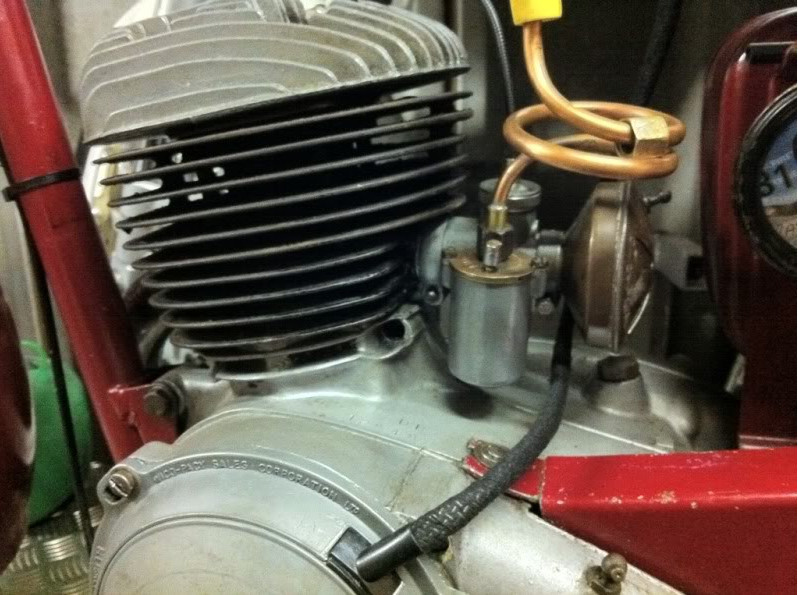 Progress on the main run down the top tube: 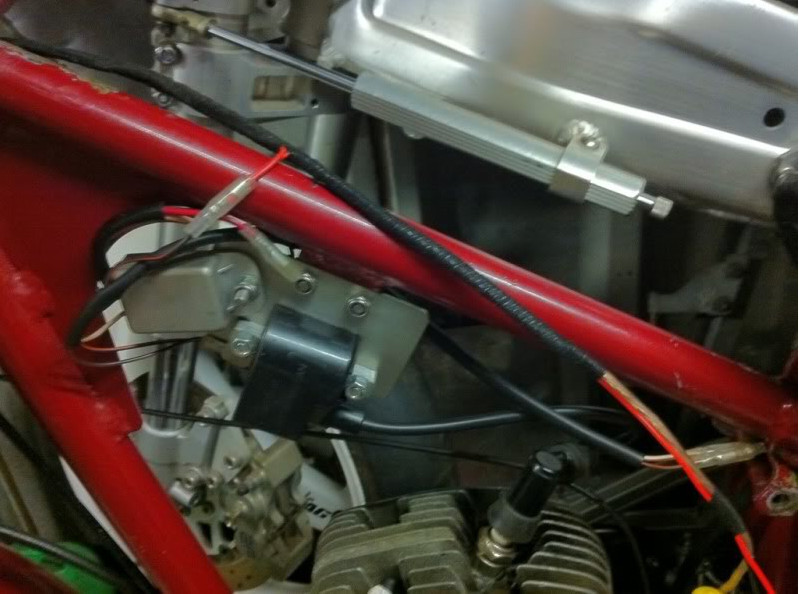 I've ordered a few bulbs from Paul Goff and a few more crimps from VWP - when they all arrive I should be able to finish it all of and hopefully get it running! At the begining of this thread I was talking about getting some riding in 'before the Autumn' - well that's been and gone and now I'm hoping for the Spring!

it`s all looking rather good, where do you get the cloth tape / had some years ago , actually i havent` tried to find any as i thought it was obsolete !

Cheers Bart 🙂 You can still buy the tape - the best brand to get is Certoplast, which is used by the german car makers for their looms. It used to be quite hard to find but now is easily bought on ebay.

Little bit of tinkering with the D1 this morning. I've been 'umming' and 'ahhing' over how to run the loom to the brake light switch so it was simple and didn't need vast amounts of tape or ties to hold it to the curved frame tubes.

My solution was to cut a length from a wire coat hanger and bind it in with the loom so that I could bend it and it hold a shape. Here it is - the wire is from near the switch to just past the right angle bend. 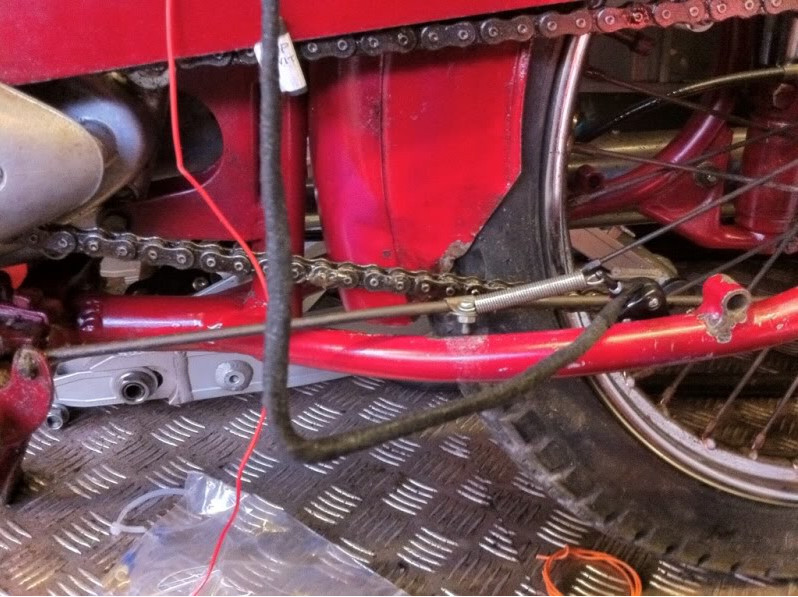 Here it is in situ. I'm pleased with this - its really quite neat and looks a little bit like its meant to be there, rather than an after thought. The picture makes the spring clamp look a lot closer to the loom that it really is. 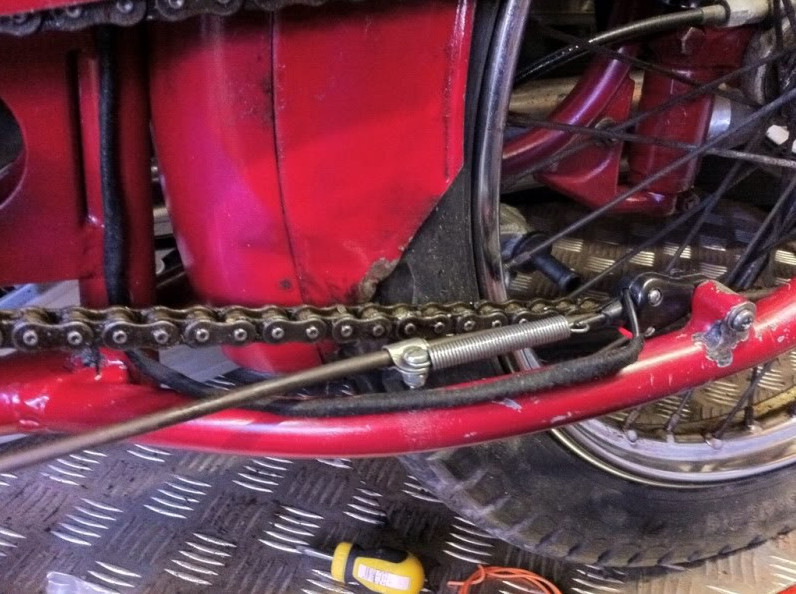 The whole stretch just needed the 2 cable ties due to the wire taped inside. Very pleased with how neat it looks and the cloth tape seems to help it look a bit more period. 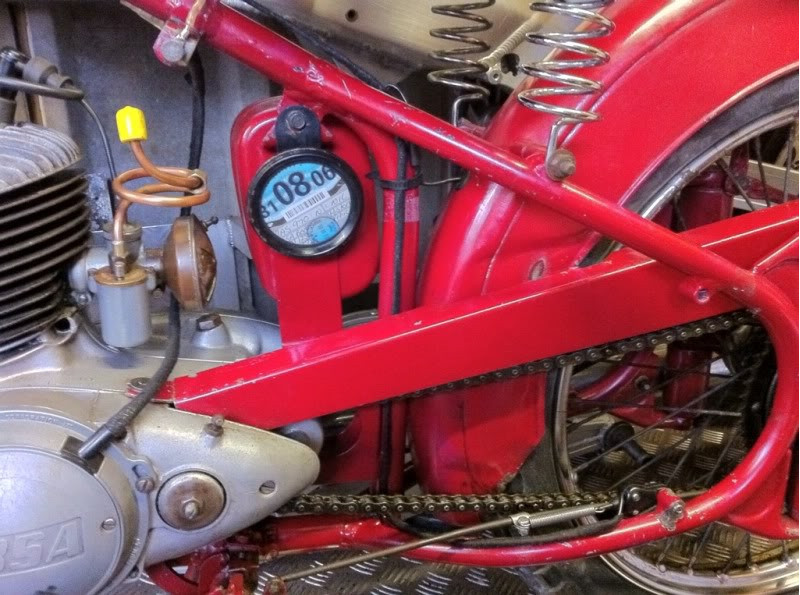 Close up showing the bullets where the wires to the back light separate. You can also see its now 6 years since I last had it on the road! Well over due to get out in the lanes again. 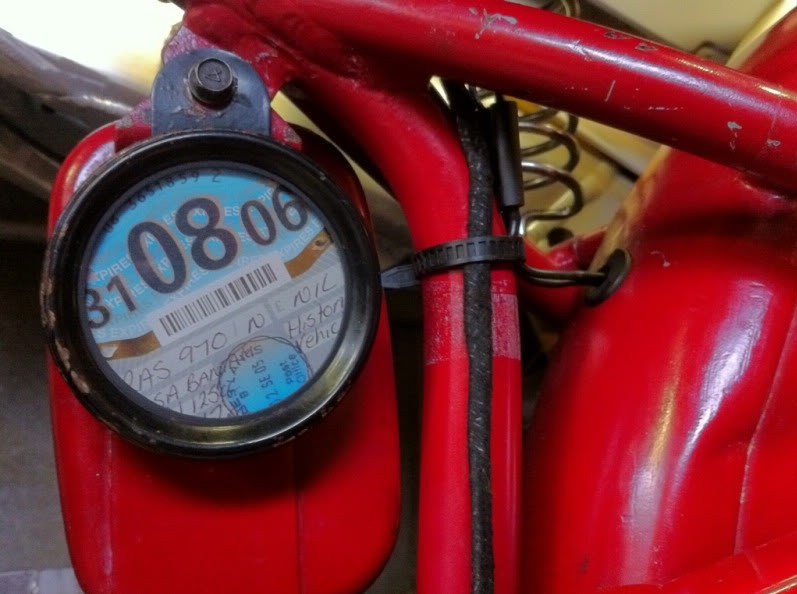 Progress and a bit of frustration tonight ...

Tank is on, piped up and really ready to go - fingers crossed for the fire up.

However - if you saw my post here: ** Please log in to view ** I ordered 3 bulbs: main, side and speedo. I noticed straight away that the main bulb sent was the wrong side - I had to pay postage to return the wrong one, which griped a little I will admit, so with a 10 mile trip to the post office it proved an expensive set of bulbs all in.

Came to fit the rest tonight - and I've also been sent the wrong size speedo bulb .... sigh. I didn't pick up on that one being wrong. Topping it off though is that I've lost the side light bulb he sent .... so no opportunity to find out if its right.

Very frustrating when its all ready bar the bulbs - and I've effectively wasted money on a set of halogen bulbs that have some to nought.

Very frustrating when its all ready bar the bulbs - and I've effectively wasted money on a set of halogen bulbs that have some to nought.

Is the headlight bulb you need a pre-focus, 6 volt, halogen ?

If so, I'm converting mine to 12 volt, so the current 6 volt halogen bulb ain't going to be much use . . . . can you see where I'm going here ?
I'll take a photograph of the little blighter tomorrow, and I'm sure we can come to some sort of arrangment. ( I dare say there will be a free 6 volt stop and tail bulb thrown in too 🙂 )

I'll start with the obvious and try a new plug - but in the mean time I'll just be miserable for a bit.

What plug are you using ? mine is much the same set up as yours and I use a NGK BP6HS, would recommend you not to use an Iridium plug, have you had it running before ??

It had not run for quite some time and then was how I described earlier in the thread: - difficult starting and only on full choke etc.

I've ordered some plugs and will have a fresh look at it later in the week.

Quote from Lone Wolf on February 27, 2012, 00:01
I'll take a photograph of the little blighter tomorrow, and I'm sure we can come to some sort of arrangment. ( I dare say there will be a free 6 volt stop and tail bulb thrown in too 🙂 ) 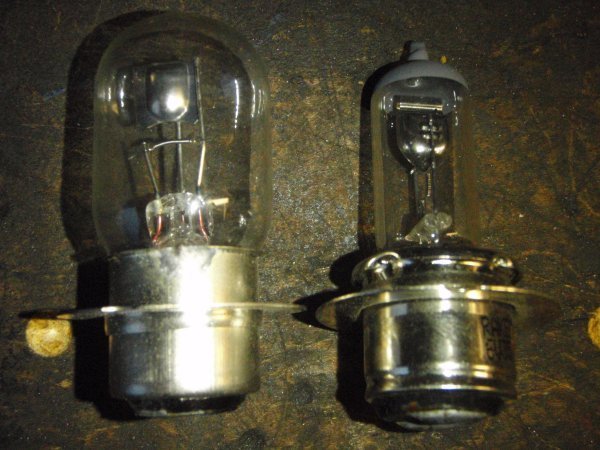 Fits this kind of reflector 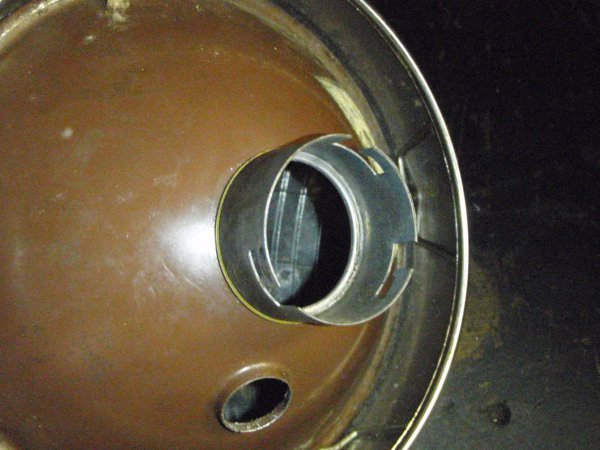 The D1 in this thread is 12v - but the D7 I have a thread for is 6v, I'll have a look if it will fit that bike. The reflector looks different from memory, but I'll post back when I've checked.

I've bought a few plugs the same as yours and its the same. It starts after quite a bit of kicking with the throttle wide open, but then dies very quickly. I'm wondering if there is an air leak from the head - I fitted it with instant gasket, so I've ordered a cork gasket to give that a try.

All,
Any moral support very welcome! It feels like launching the bottle of champagne against a ship - only for it to punch a hole in the hull ...

Is it loosing the spark or do you think it is something else.
Obvious things to check if it is electrical is the condenser and the ignition coil, Ht lead and plug
less obvious. Is there wear in the stator bush, this can lead to whip at the end of the points cam and can close the points intermitantly. Check the terminal post that holds the end of the points and the condenser wire this can work loose, there should also be an insulating washer on the back between the stator and the fixing screw. Using feele gauges check you have an air gap between the the end of the stator spider arms and the flywheel, rotate the flywheel and check at different positions, if it touches the spider ends in different places it could indicate some inbalance in the fly wheel.

If you think it is carburation work back through the jets and clean the carb, have you an inline filter this can help if dirt has got into the tank. Check the flow of fuel from the tank, if it has been stood the tap may be blocked, also the shut of needle in the float chamber can stick sometimes.

Hi Howard - I don't think its the spark, its a brand new Rex Caunt electronic ignition. The carb is pristine, plugs new, tank is freshly cleaned out - there will be some small bits left in the tank but I don't think they are getting past the gauze filter on the tap.

So I'm thinking if fuel and spark are good - it must be an air leak ?

Not had much garage time recently - but today I took the tank off and fitted a new cork to the petrol tap - obviously not addressing the non starting issue! But nice to stop the drip, drip...

With the tank off I whipped the head off to look if my instant gasket was letting air in ... The goo appeared to have disappeared and fuel was on a fair portion of the mating surface - so it seems that unless I did that in disturbing it, air (and fuel) had been passing under the head.

I should have lapped the barrel and head together previously - but was too excited to hear it run ! Anyhow, putting aside any thoughts of raising compression I bought a nice cork head gasket and fitted that.

Just waiting to pick up some fresh fuel and I will give it another go ..... Cross your fingers for me please folks!

PROGRESS (but no photos yet!)

I've been for a ride

Still lots to do, but now its starting and running really well. New plug, new earth, new head gasket and new petrol saw it running - but stalling every time I turned the lights on .... cue embarrassment as I realised I'd connected the ignitions kill switch wire to the light switch instead of the 12v feed ..... cough .....

Electrics are still not right as the 'low' position gives me fully working lights and the 'high' position nothing. I'd wired it so 'low' would give the side light a 12v feed (rather than the little headlight battery) and 'high' would be normal DC lighting (but 12v).

Other than that I had a few small issues:

But all that aside I couldn't resist going up and down the lane several times which was wonderful. Up and down, up and down and lots of smiling

I think I may need a new throttle cable - it looks the wrong cable and has the wrong ferrule.  And it seems to perhaps not be fully lifting the slide ? top speed was low and it seemed to labour in top.

So up and down I went until the back end went squirrely and I realised the back tyre had gone flat.. not sure if the tube has perished with standing or if it will pump up again, I'll find out as soon as I find my foot pump.

So.... quite a bit to do - but I'm delighted and what a boost towards finishing the last jobs off.

If the tyre pumps up I'll film a short ride out tomorrow.

The tyre didn't pump up - in fact its goosed!

I also hadn't noticed before that the rear was 19 x 3.00, which explains the tyre rubbing on the mudguard.  So I've ordered a pair of Mitas tyres in line with our thread ** Please log in to view ** ones.

So whilst in for a penny - I'll take the opportunity to overhaul the brakes as per my post in the ** Please log in to view ** and also give everything a clean and fresh grease.