A Rex Caunt ignition is now in the post on its way to me. I'm looking forward to having a 'useable' D1 - I'm a bit late for summer, but hopefully I can get it installed and set up in time to enjoy some of those crisp sunny Autumn days. 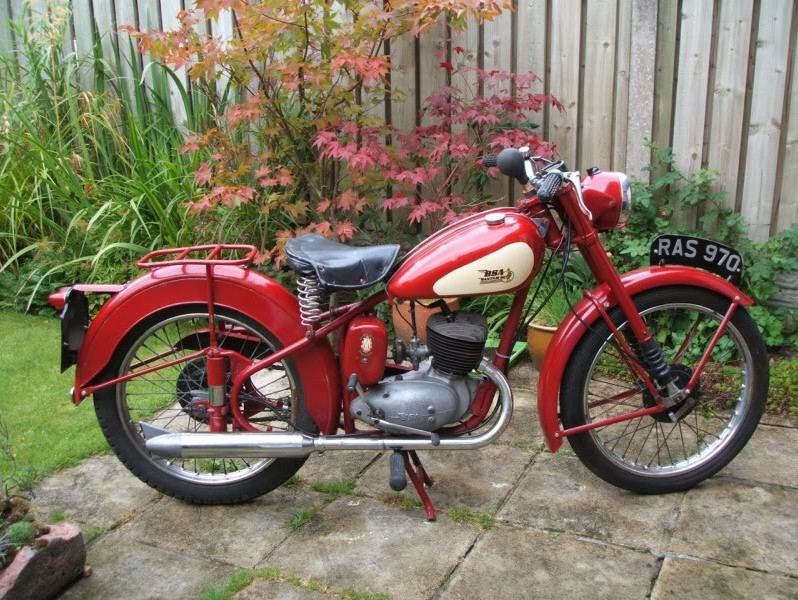 nice looking bike u have there,, love the colour
cheers Alan,,,,,...

Yea, I really like that colour too,what is it?

Triumph Thunderbird 900 Yamaha rxs 100 and too many bantams !

I've no idea on the colour ! I like it too though.

At some point I might give it a fresh coat - it looks better in the photo that in the metal so to speak. When I get to that point though I think I'll repaint it the same colour.

I'll post some pictures up of the ignition when it comes.

On a different note - I'm missing the little washer that is listed as 'footrest rubber locating washer'. Can any one tell me what its like? is it just a plain washer? The part number is 24-5914

I was surprised by how much play there was on the brake pedal around the bush it sits on - so I stripped the footrest, nut, spring washer, (missing retaining washer), tube and the last washer to get at it. I then cut a small strip of shim and formed it to slip inside, applied plenty of grease and reassembled. Much nicer 🙂

The tube is past its best, doesn't look an original piece of kit and one end isn't even cut straight ... the rubber had a tendency to vibrate towards the end of the peg too - so I'll source a washer of the right size and see how that works.

Was yours a battery set up or the 12v AC ? Any tips for installation?

Hi Stephen
Mine was the battery version I fitted it on my D7 single switch, just had to make a coil mounting bracket fit the new flywheel & modified stator plate, it has timing pointer that you line up with a mark on the flywheel, make connections to battery & loom job done.
It comes with a wiring diagram but I'm sure if you have any problems a call to Rex Caunt & he will help. Don't forget to let us know how you get on
Regards Nick 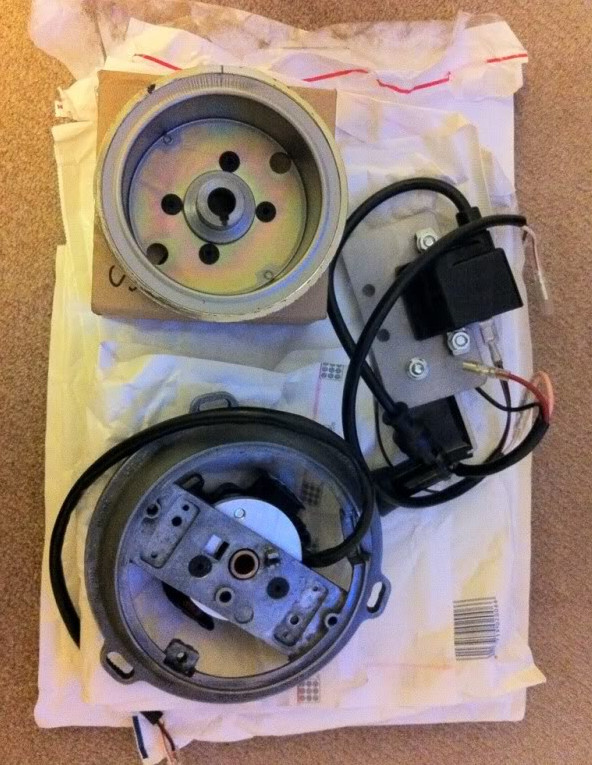 A bit of progress tonight. Rotor swapped over and the new stator plate fitted but not yet timed... 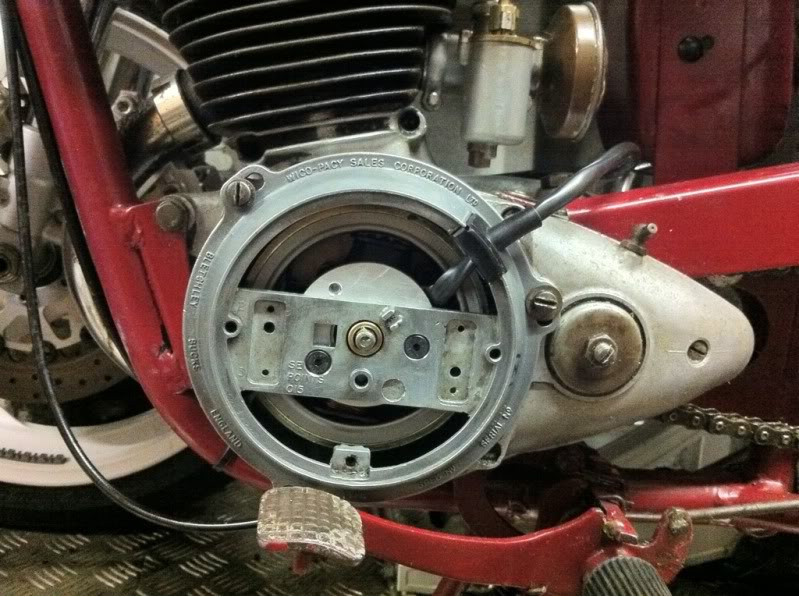 Its a very elegant looking piece of kit 🙂

Looks good! Got her working?

More progress tonight - got the coil and regulator mounted and wired it up. I took the opportunity to strip out a bit of a 'birds nest' of wires lurking in the headlight shell - amazing how such a simple loom can be complicated by previous owners over the years. 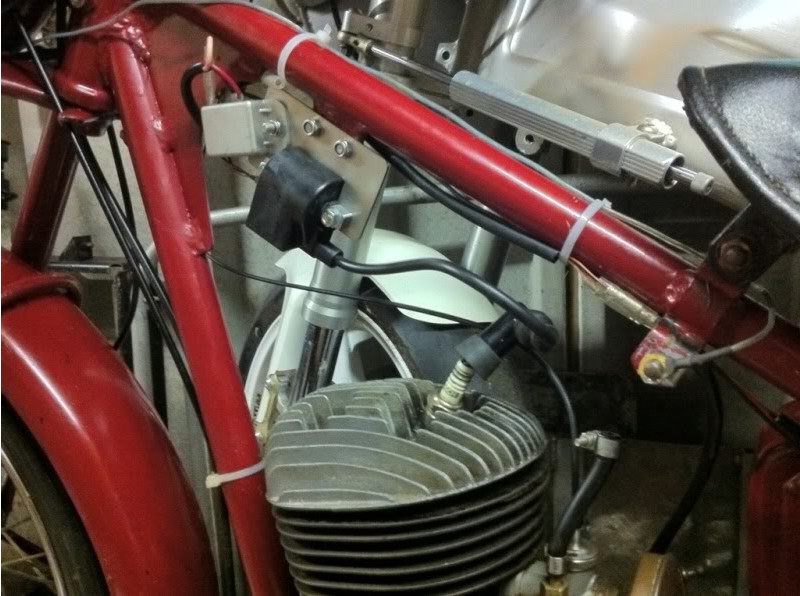 There is a single live 12v feed from the regulator / rectifier which I have run two wires from - one up to the headlight switch as per the standard set up - and one running to the back of the bike for the added brake light switch.

In coming to time it, the instructions say to align the marks at 3.5mm btdc - my stator plate is as far as it will go at 4.2mm btdc, so I'll elongate the slots a little with a file and see if I can get it spot on. Did anyone else who has swapped their ignition have this issue?

I could not get mine to the timing position as per the instructions either, rightly or wrongly I went for a start and off it went ! its been in the same position ever since ( over two years ) up to a point I don't think its that critical, the advance on this set up is quite sophisticated, maybe one day I will make an effort to put it in the correct position ??
Like yourself I took the opportunity to sort out the general birds nest of original wiring, fitting this set up kills two birds with one stone and eliminates the main causes of Bantam unreliability as I see it, firstly the ignition/charging and secondly the wiring. Lets us know when you get a start.

A little more filing early this morning and I'm down to 3.82 ........ It's a slow process as I don't want to remove too much material from the lug. So I file the three lugs, brush off the filings and then a little compressed air to make sure it's clean - then re-fit and remeasure.

I've no dial gauge so I'm using a depth gauge off the edge of the bore - seems ok though as I'm getting consistent results.

I dropped a mail to Rex to ask about the filing and he's said that would be fine and that the key ways are often a bit different to each other. He also said 'just try to get as close to the 3.5 as possible'.

I may end up being limited by how much material I'm comfortable removing.

One other thing I'm thinking of doing is popping the barrel off and seeing how far off matching the cases, gasket and transfer tunnels are.........

on the first D1 I used this system on I couldnt get the ignition to set up so I did away with the key on the flywheel , had no problem with it like that

Well - I got the timing to 3.5m btdc 🙂 very pleasing and just in time really as I'd reached the limit of how much material I was prepared to take out.

As per my previous post I decided to pull the barrel off and take a look at how the cases matched, armed with a new base gasket I compared the fit against the top of the cases and the bottom of the barrel. The gasket was ridiculously flimsy and tore immediately :/

What was obvious though was that the gasket was undersized for both the barrel and the cases - so no good for judging the match or mismatch of the transfer opening..... the black marking on the bottom of the barrel shows the mismatch between the std base gasket and the ports (it was a similar story on the cases): 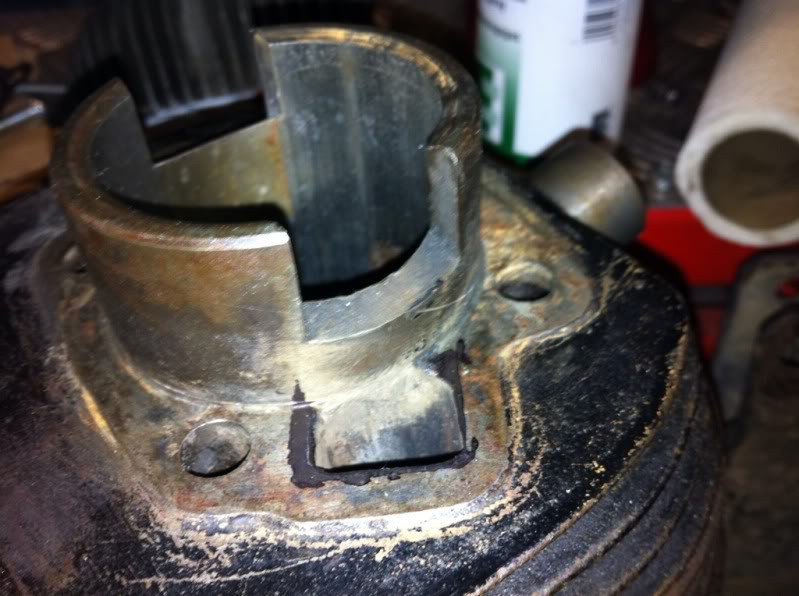 so I quickly made a paper gasket: 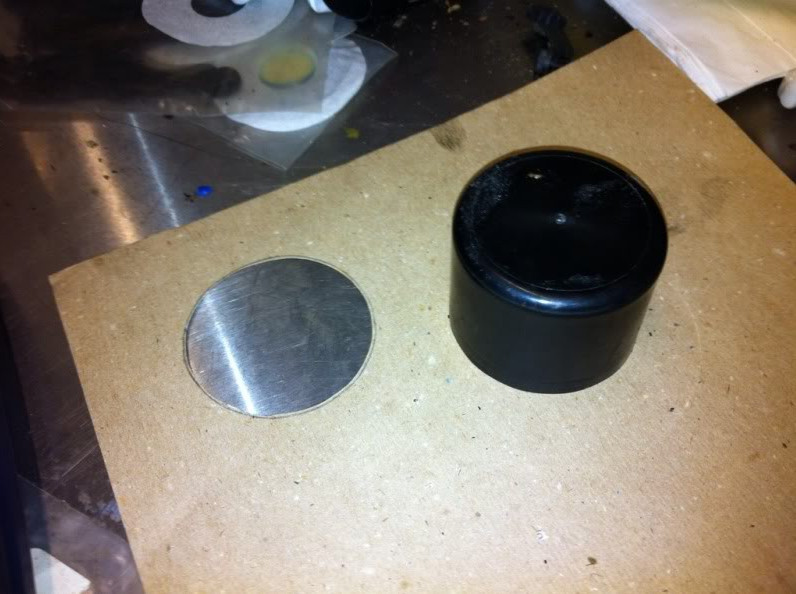 The paint can lid was the same outside diameter as the barrel liner.

Paper then over the bottom of the barrel - and tapping to produce the outline: 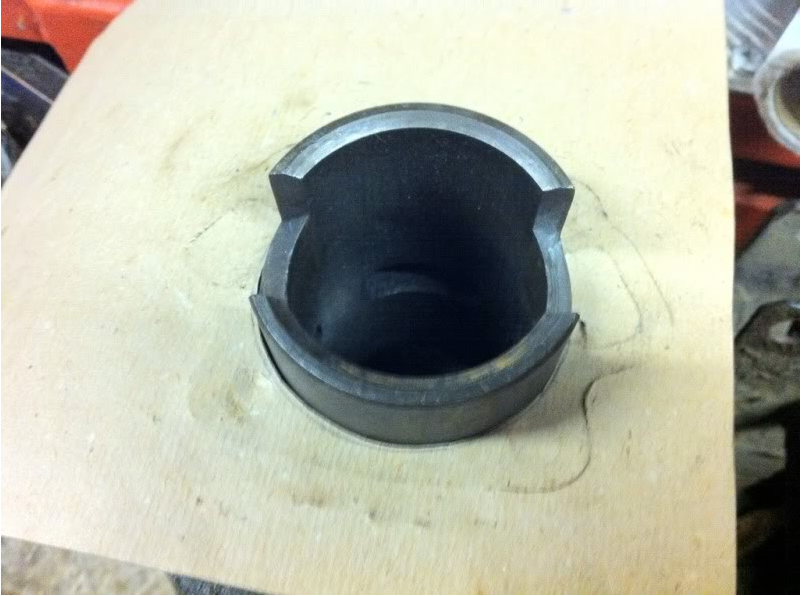 Cut the gasket out and transpose it to the cases: 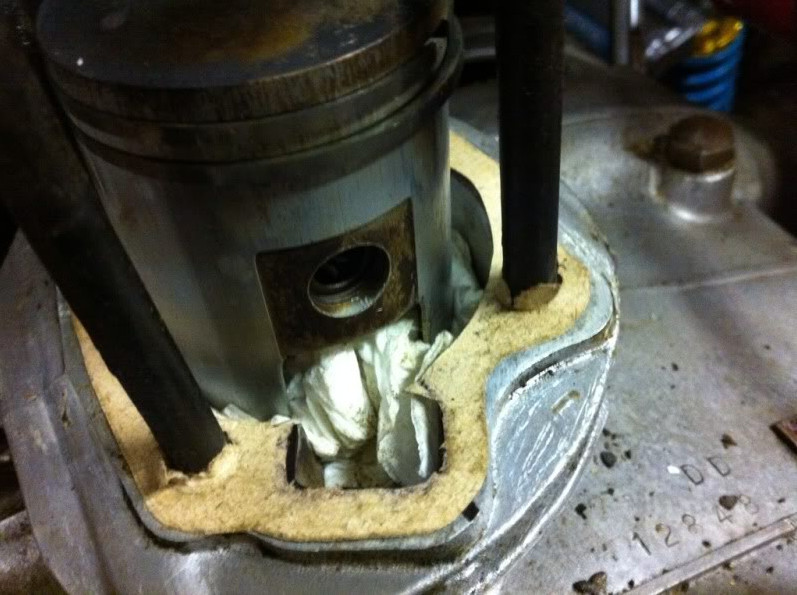 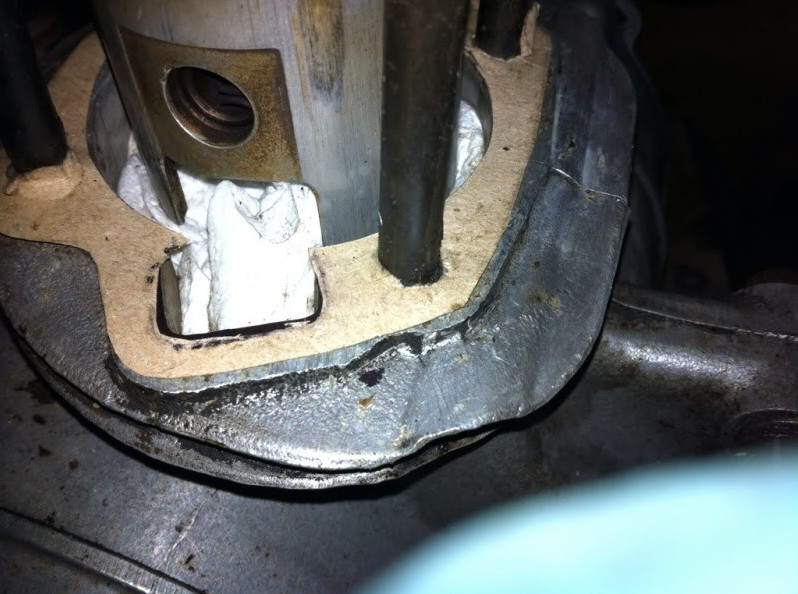 Not bad at all - in fact the very small mismatch is more down to my cutting than anything.

The worst obstruction is where the tunnel opening runs as a straight line - as you can see on the left of that last photo. Whereas the barrel turns back towards the liner as the gasket does there. More on that on my next post. 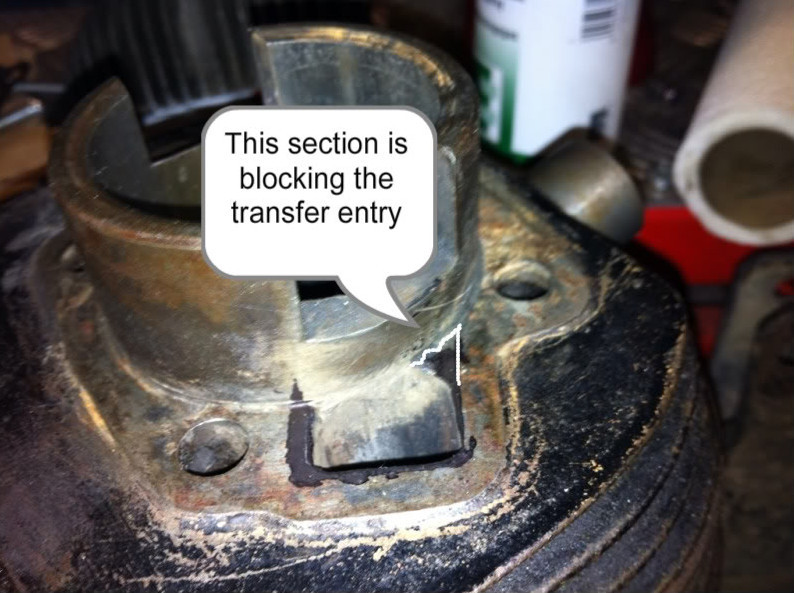 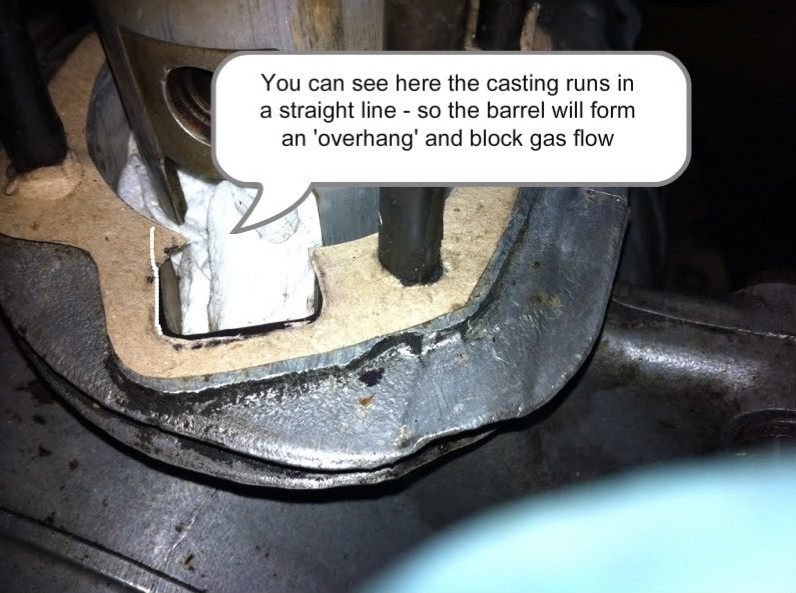