I've already ** Please log in to view **, but unfortunately most of my pictures were wiped out by the Photobucket situation. I'm going to create an abridged copy of that thread here.

I bought this project in my Senior year of college, and it immediately went on the back burner. When I first got it, it had been crudely converted to road use with lights, a luggage rack, a horn, etc. All of these parts, except the headlight, were ruined by corrosion, so i pulled them all off. I spent 2 1/2 years slowly gathering the parts I needed and repairing various bits. 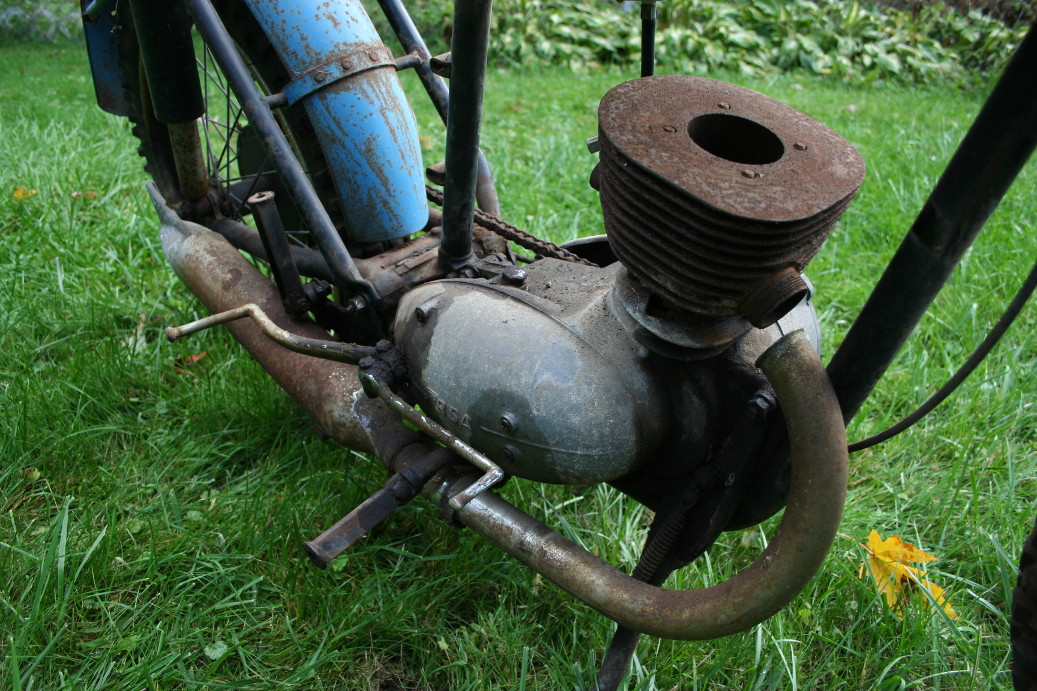 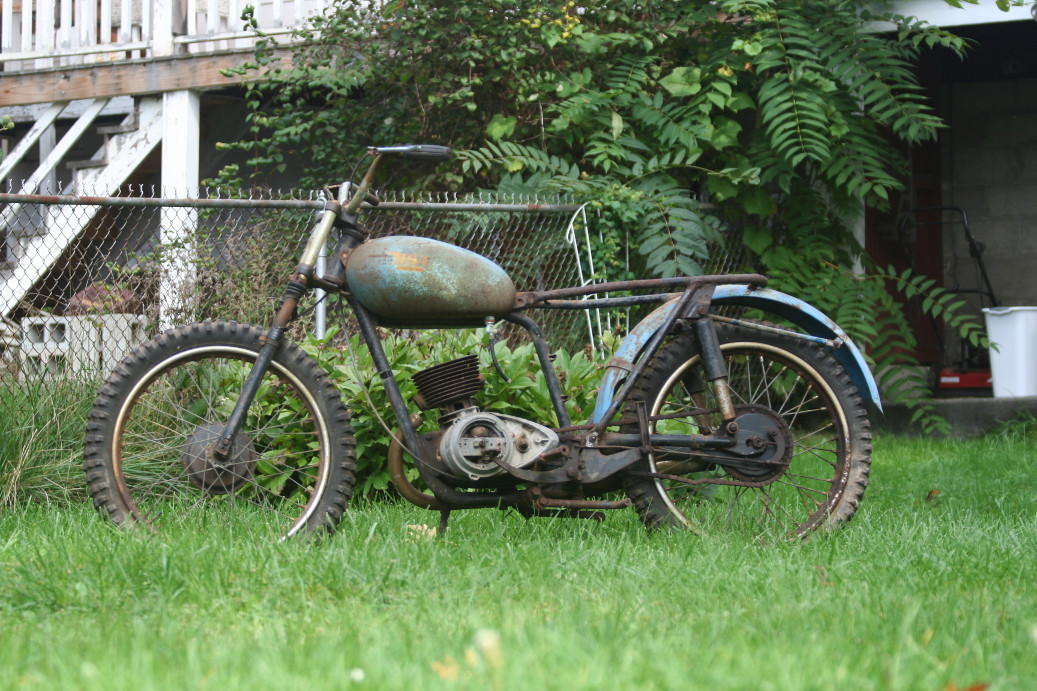 So far, I've rebuilt and regreased the front and rear suspension, painted the worst parts of the frame, replaced the tires, replaced missing hardware and rotted parts, and installed the aftermarket headlight, a D7 fender, and the centerstand from the rotted parts bike i bought with it. 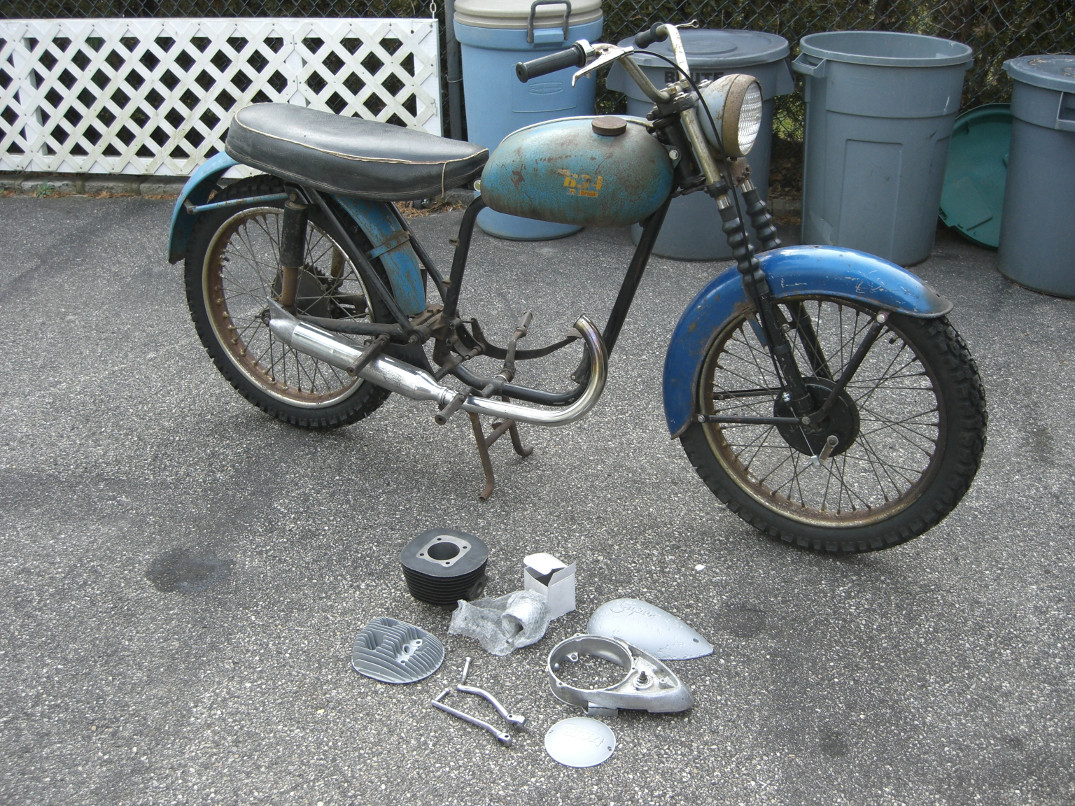 Engine work has taken a bit longer. So far, the laundry list of problems with the engine have included:

- completely worn out clutch. All the cork had been ground off and the plates were metal-on-metal

- large stress fracture in the engine case around the crankshaft

I was able to get replacement covers and a cylinder head from the rotted donor bike. The first step was to have all the parts with set-in corrosion bead blasted to clean out all the cracks and pockets, and then liberally coat them with high temp paint to protect them.

Next, I had the cylinder bored .040 over and bought a replacement piston. I also got a Rex Caunt trials carb manifold and port matched it with the intake. 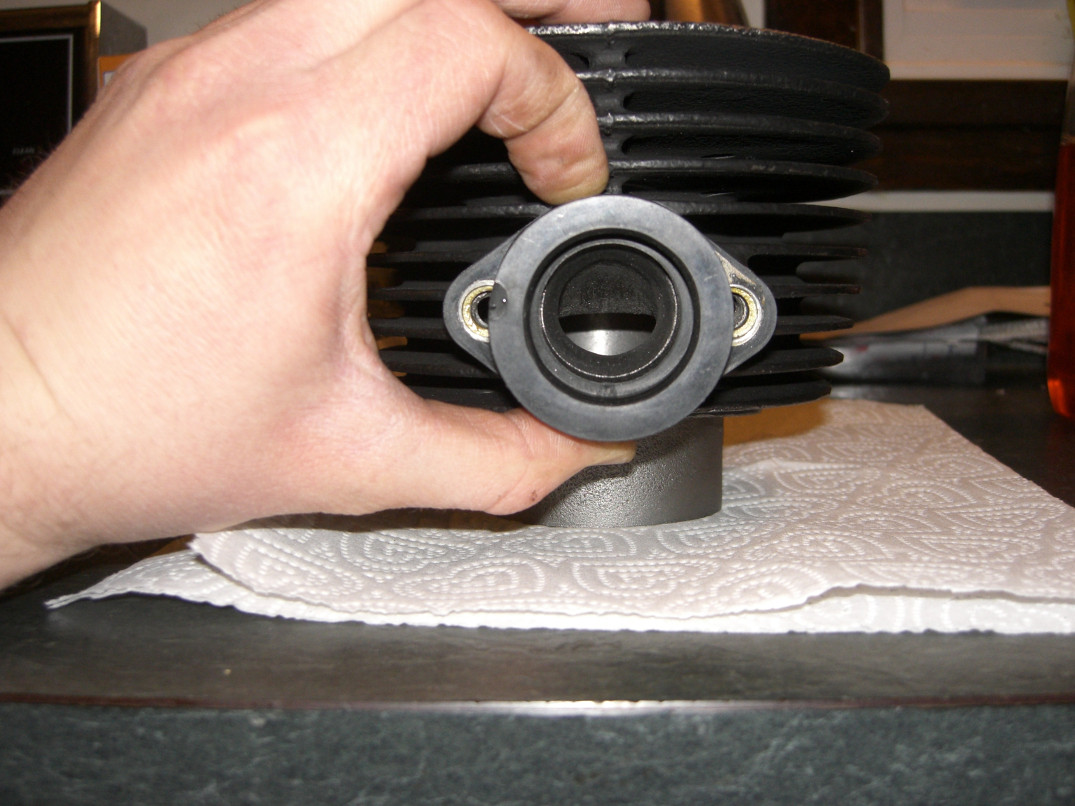 The next major part was the cracked case: 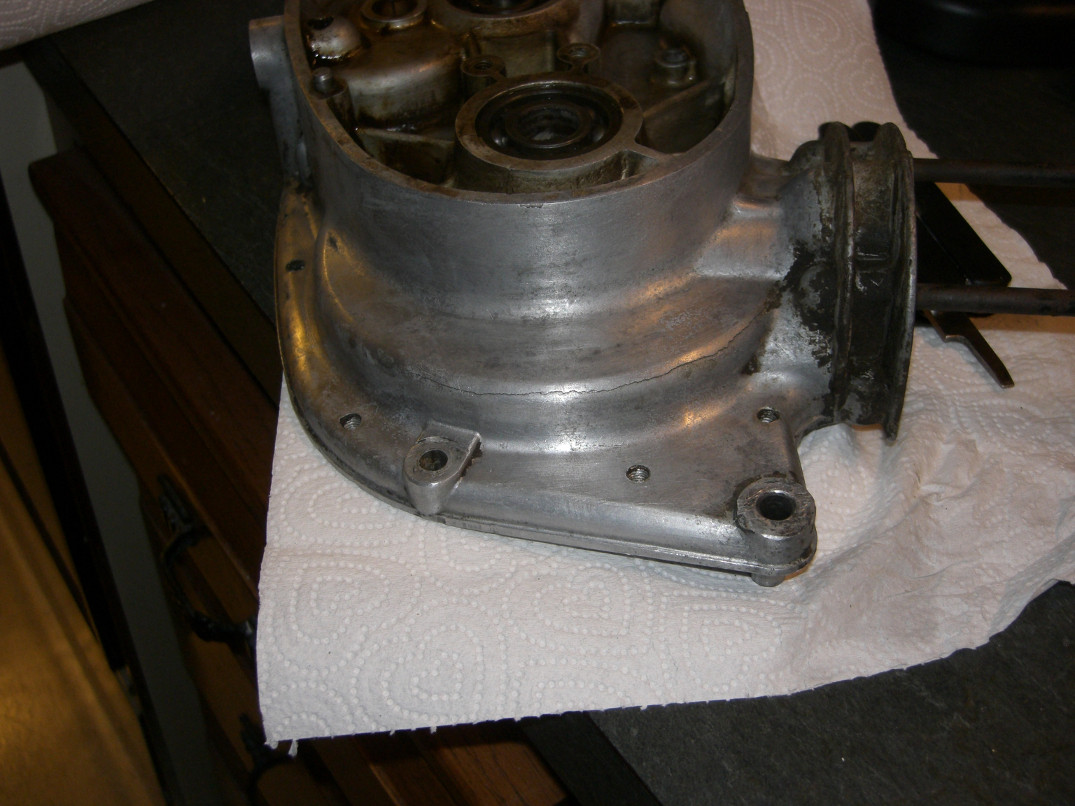 My bike shop suspects that at some point when this was sitting with the head off, water may have pooled inside and then froze, which might explain the crack there. I had a local welder stitch up the crack, and then I mounted it to mill and re-machined the internal crank clearance. 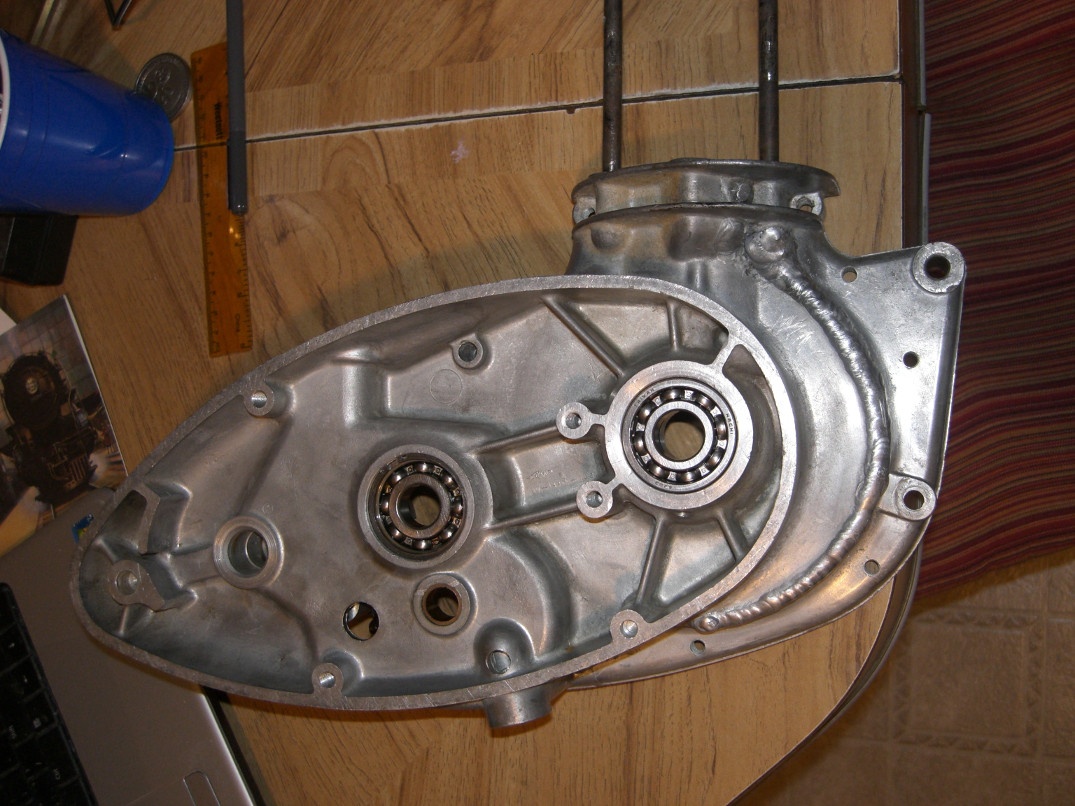 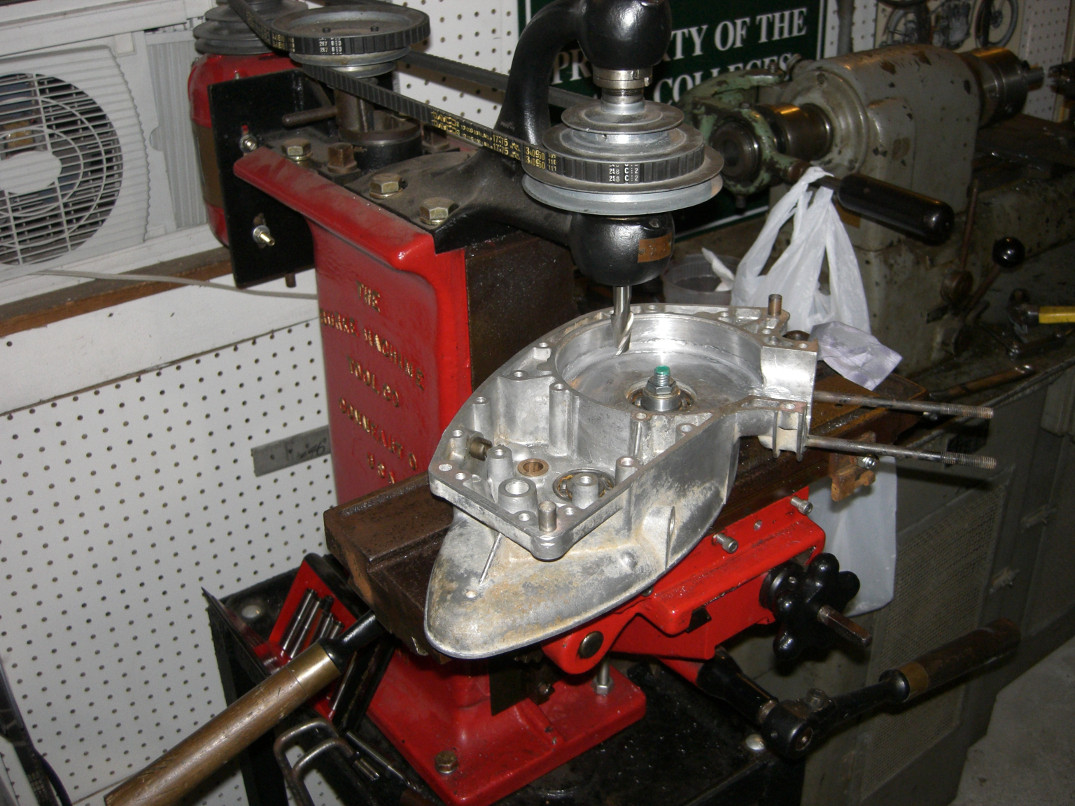 I rebuilt the crankshaft with the excellent Conrod kit supplied by Peter Ellis at T&G. The quality of these parts are amazing, and a huge improvement over the factory design. Then, I started reassembling the engine: 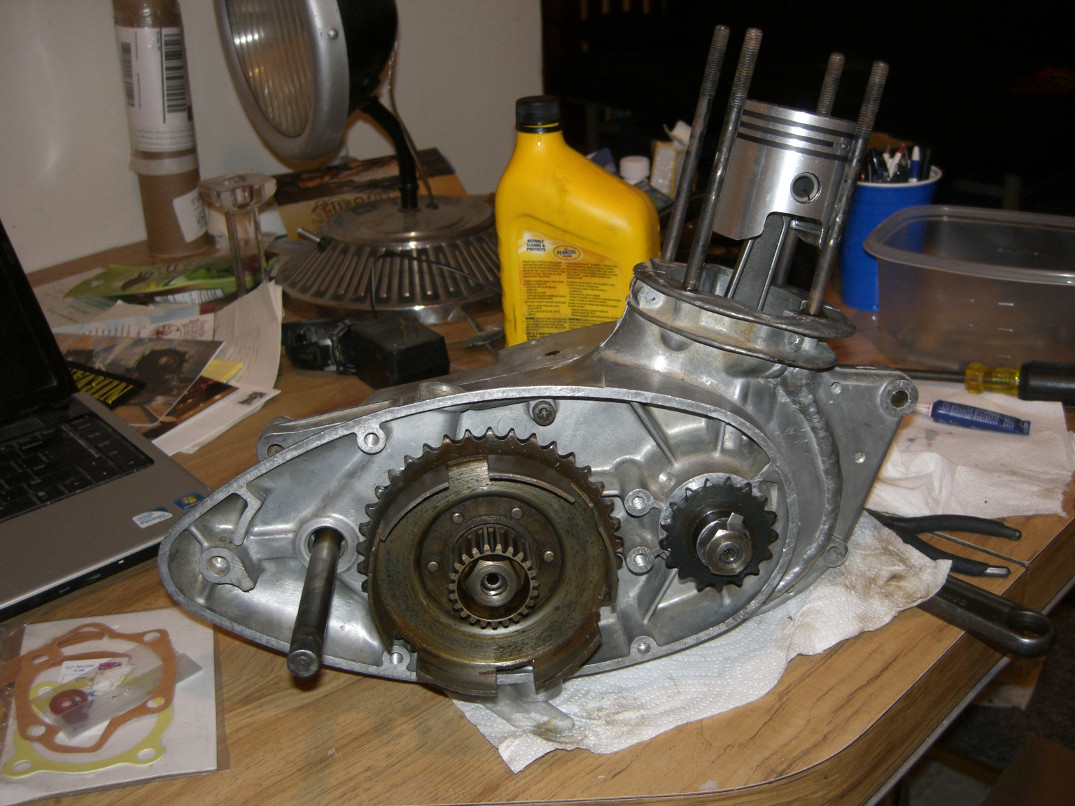 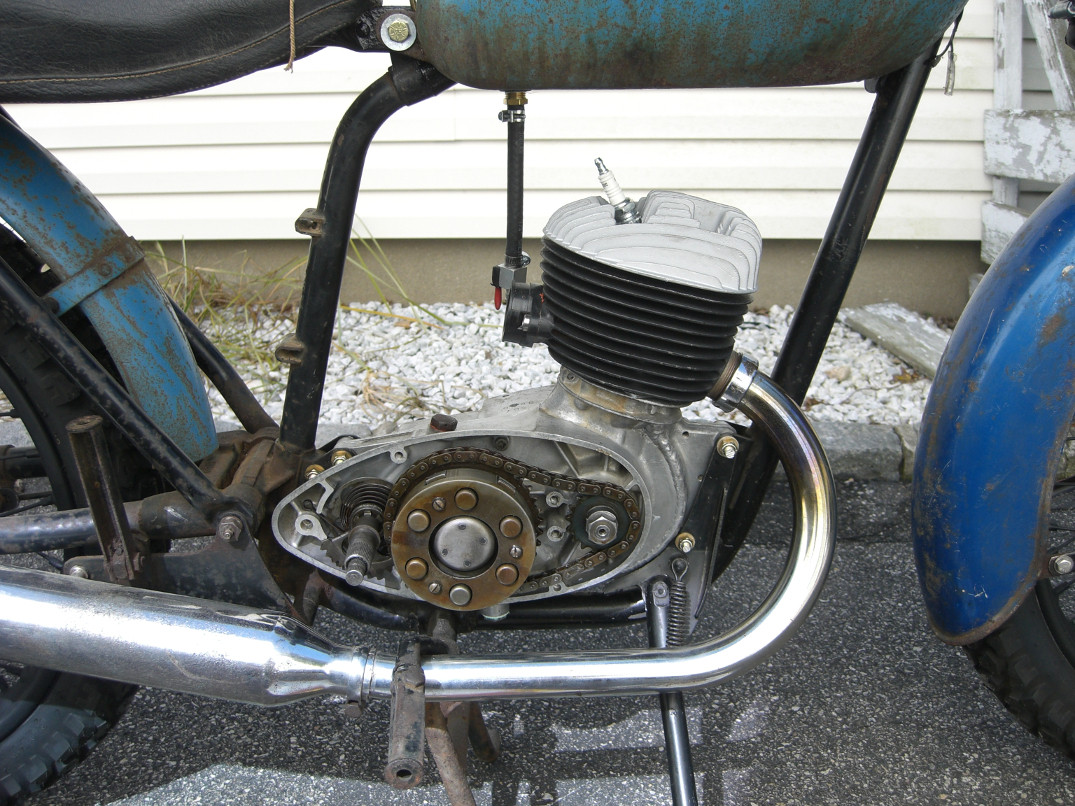 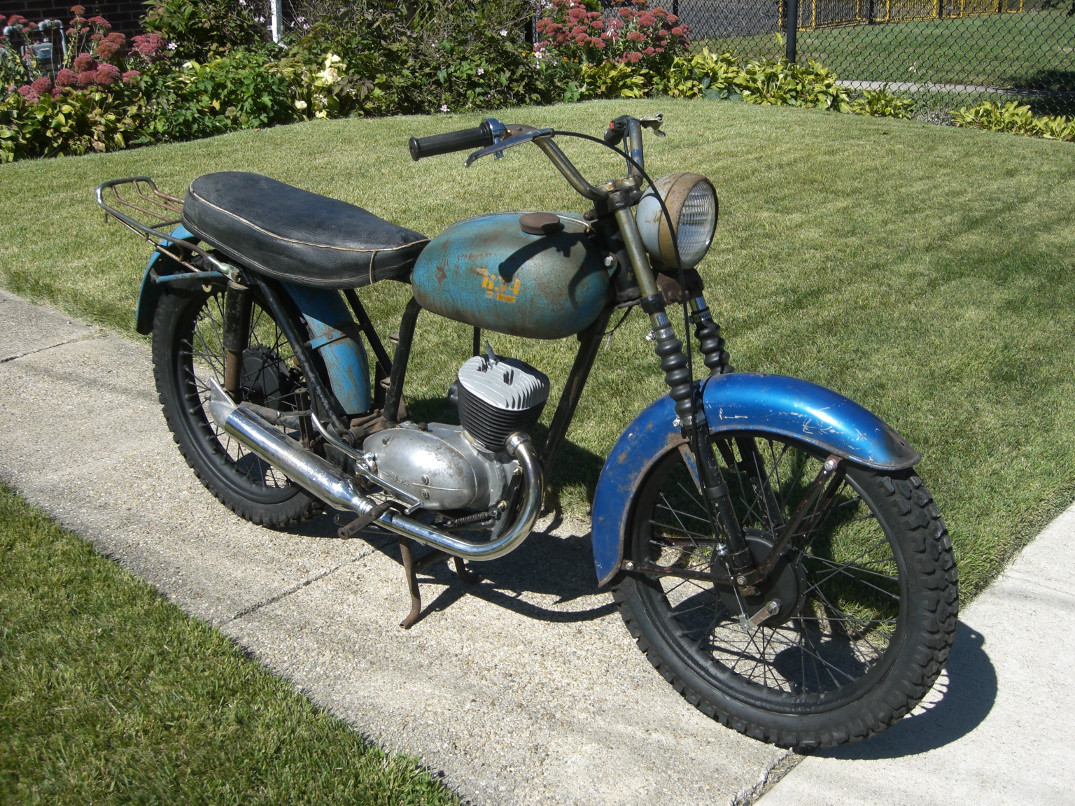 SUUCESS! Still needs a lot of tuning and tweaking, but this is a big milestone for this!

After getting it running in the video above, I couldn't get it started again for over 8 months! I went through every system twice, and finally discovered that the replacement ignition coil that I fitted was faulty. Apparently it had some sort of internal short or progressive deterioration that allowed it to spark intermittently, and only in open air.

The coil finally stopped producing spark when I had the plug out of the engine to test it. Rather than repair it to stock again, I replaced the original setup with a total loss 12-volt system using a pattern replacement Yamaha coil and a lead-acid hobby battery. It is timed and triggered by the original points and uses the stock condenser, but majority of the system is now mounted next to the battery box I installed.

The largest battery that I could find which would fit in the stock tray is a UB1250 hobby battery. There are no 12 volt powersports batteries (that I could locate) that are narrow enough. The battery is rated at 5 Amp-hours and I measured about a 2 Amp draw from the system, so theoretically it should last around 2 hours before it starts to die out. I suppose you could use a stock charging system and modern rectifier to replenish it, but i haven't tried. 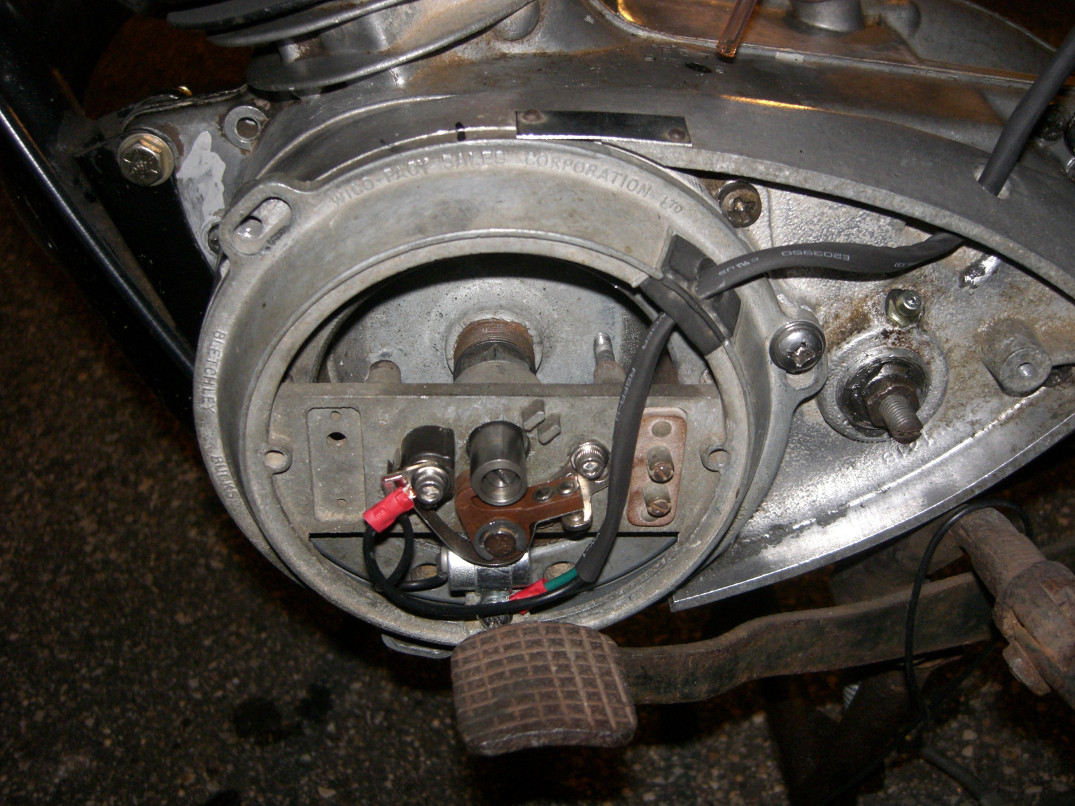 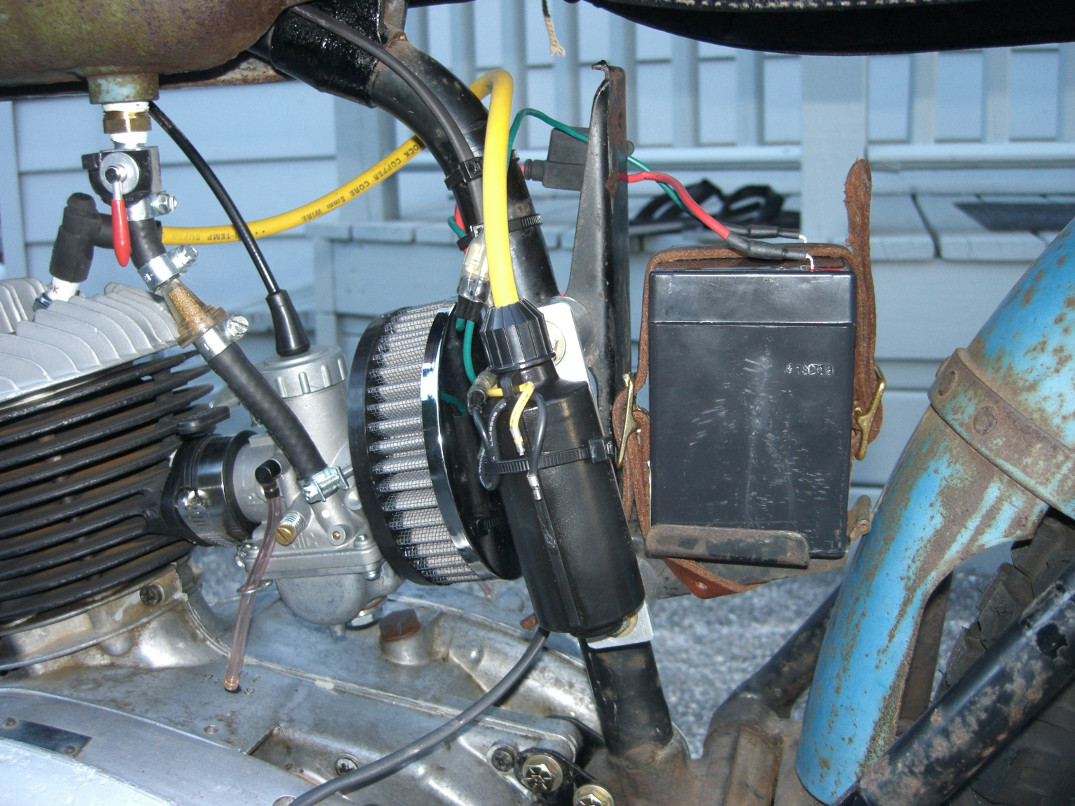 I also used a modified spark plug to find TDC and create timing marks on the flywheel. 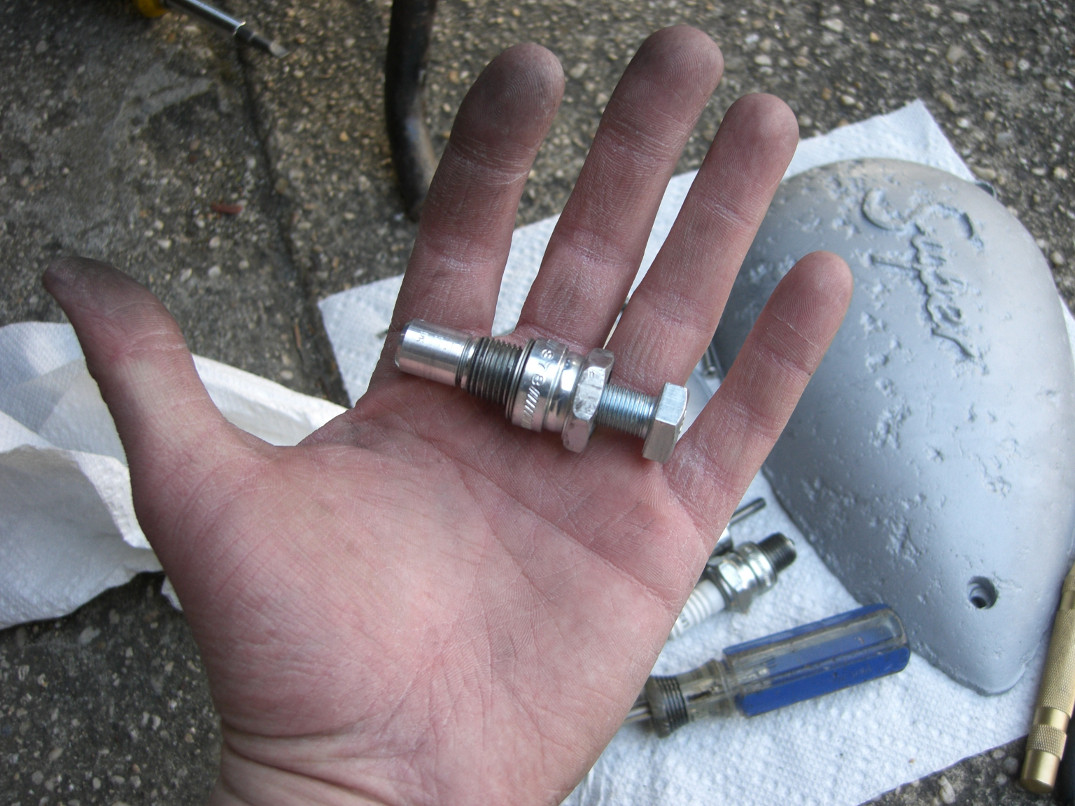 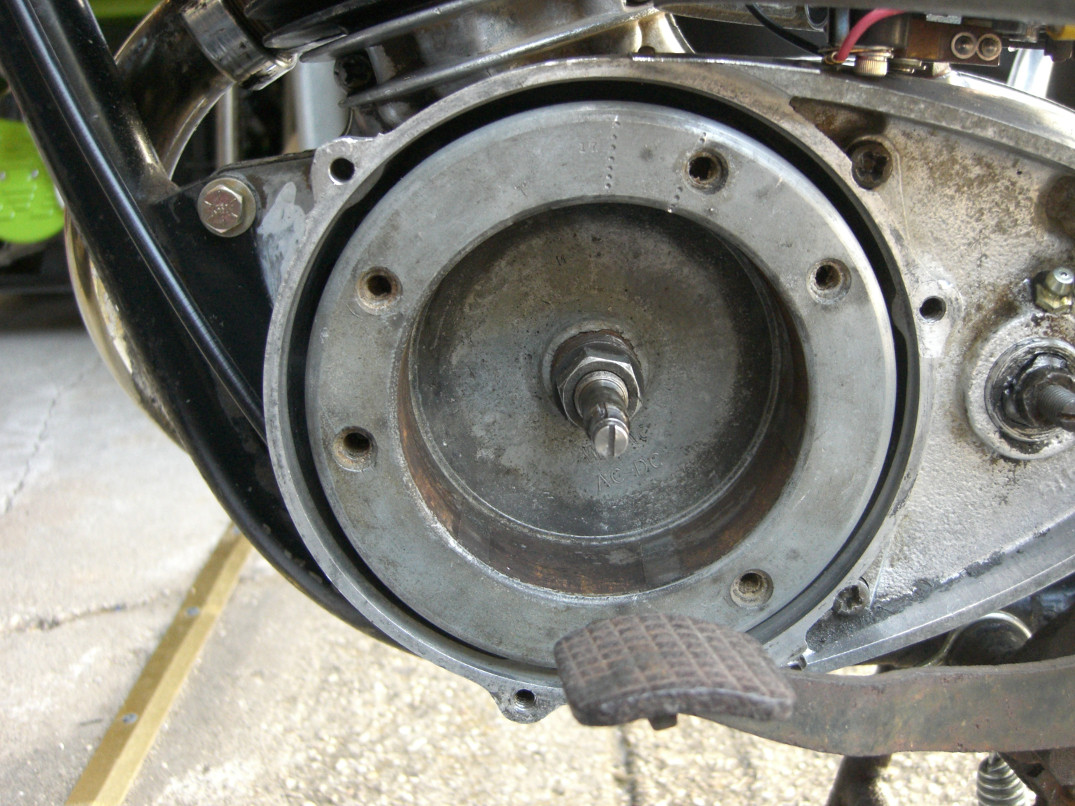 Towards the end of the last riding season, the bike developed a bad backfire through the carburetor, indicative of an air leak, so I put it up on the bench for inspection.

The cylinder for this bike was heavily pitted and corroded, so during the rebuild I coated the joint between the intake flange and the new carb boot with HondaBond gasket sealant. Unfortunately, the surface was worse than I thought, and the constant vacuum of the intake gradually sucked the sealant into the intake port. Eventually, enough was sucked out that an air leak opened up, causing the backfire.

The air leak had caused the piston to slightly seize, so I polished it with high grit sandpaper to remove the markings. The cylinder bore didn't have any scratches or damage, so I left that alone. To fix the air leak, I thoroughly cleaned the flange surface and applied a 2-part epoxy called MarineTex. I scraped it flat, applied a second coat once it had dried, and then block sanded the surface until it was absolutely smooth. 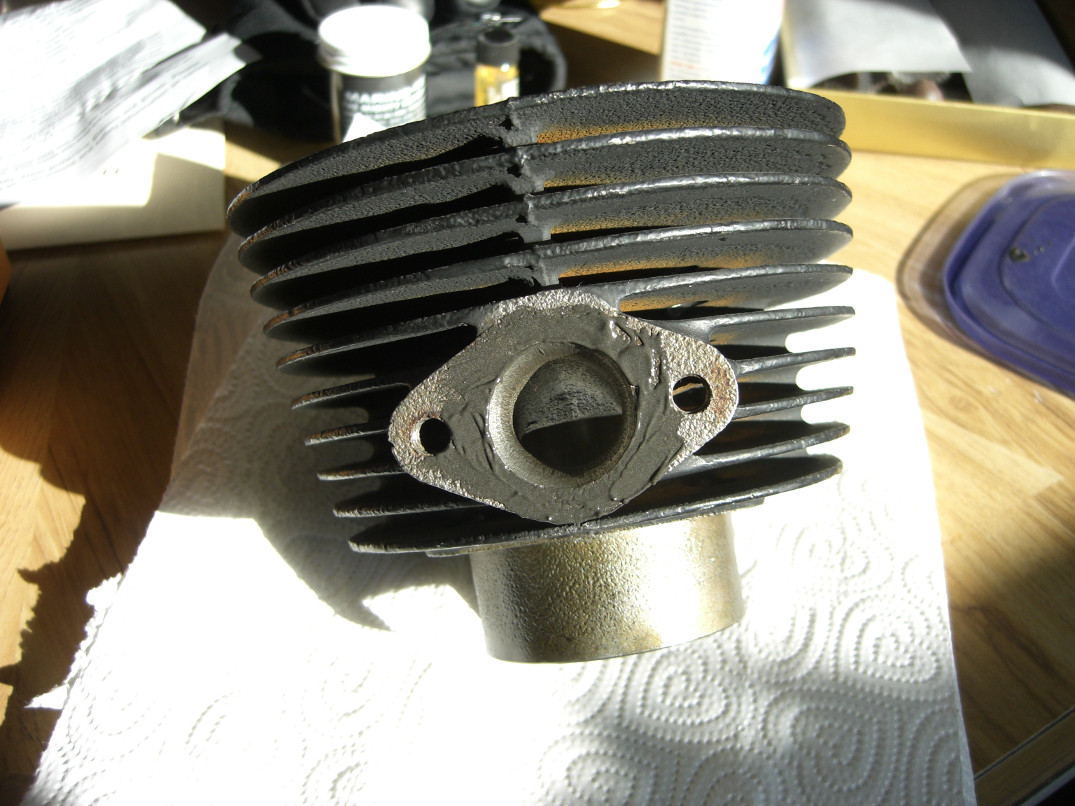 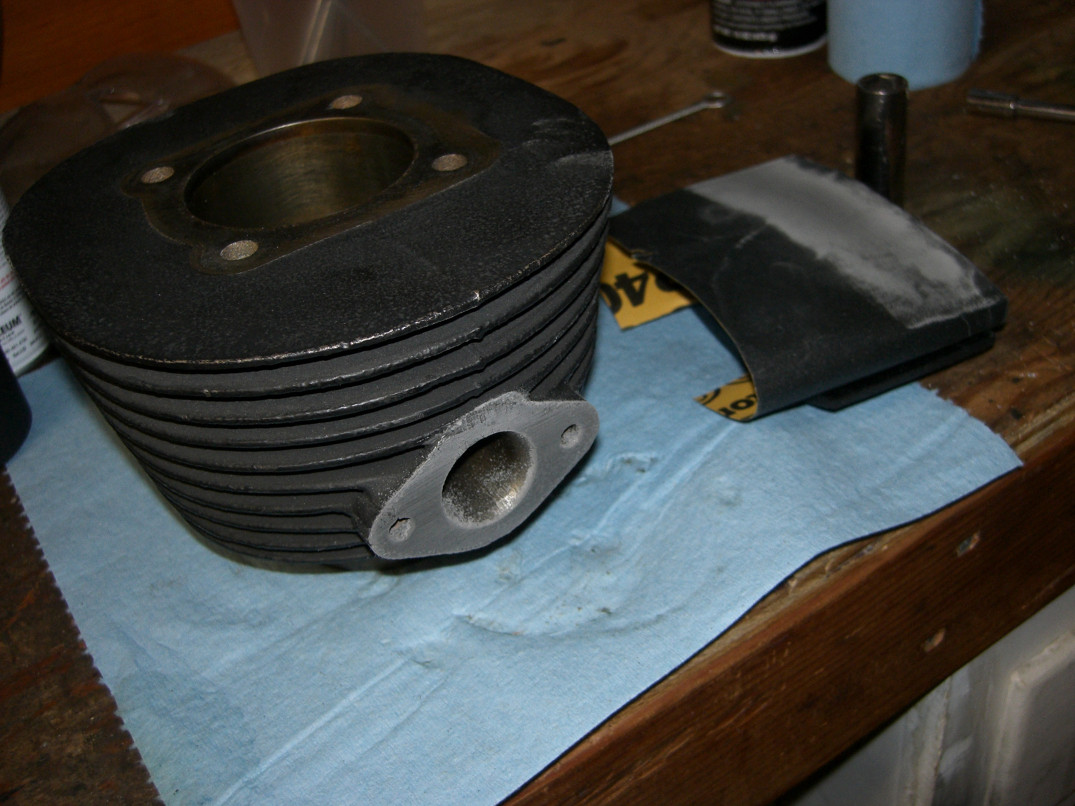 Disasters always come in threes, and this engine was no different. After refinishing the piston and cylinder, I reassembled the top end and took it for a shakedown run. After a few laps around the neighborhood, the engine lost power. I was able to restart it, but three blocks later it stopped for good and nothing could light it again. I pushed it the rest of the way and tried to diagnose the problem.

The carburetor was clean as a whistle and the tank was full of gas, so fuel was not an issue. I pulled the plug and saw a fat blue spark, so electrical wasn't an issue. Then, as I was re-installing the plug, it tightened, tightened, and suddenly began to loosen. Dammit, stripped threads. I removed the plug and lo and behold: 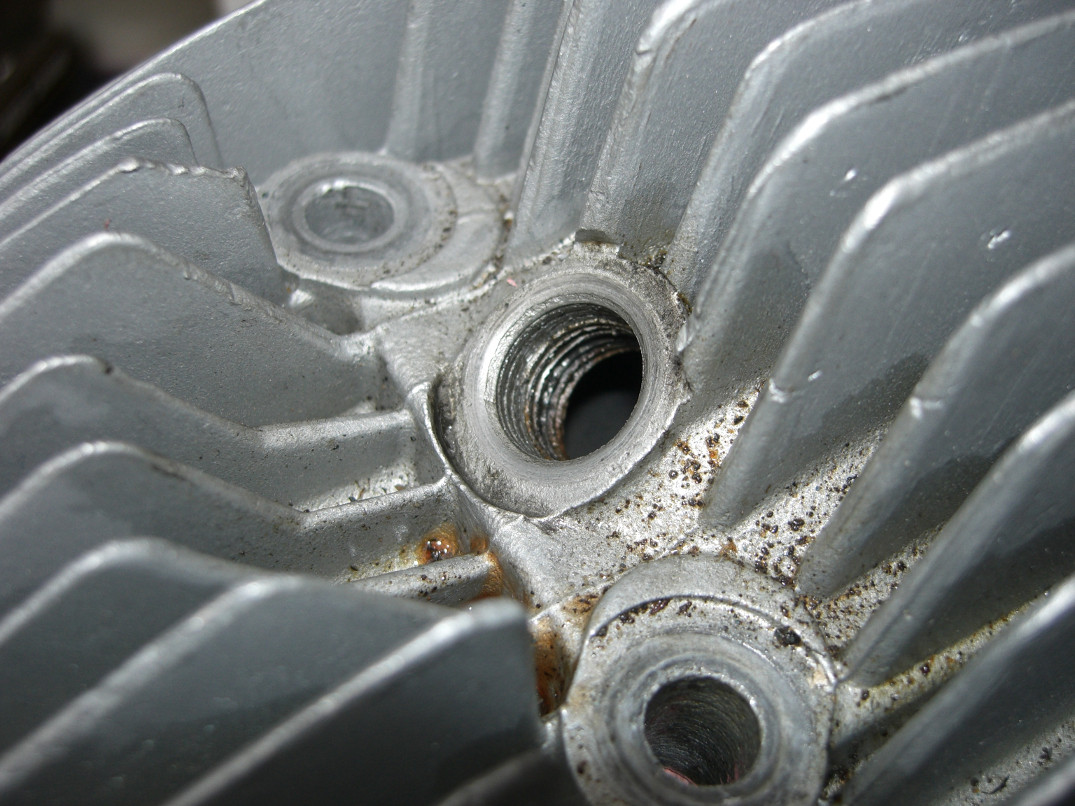 This head had come from the rotted parts bike that I bought along with the Trail Bronc, so apparently the weakened metal finally decided to give it up. I purchased a thread repair kit that is specifically designed for spark plug use, and repaired the head.

The kit provides you with a stepped tap. The narrow beginning tap matches the original thread. This screws into the remains of the original thread, and aligns the tap for the next step, which bores out the hole and retaps it for the outer thread of the insert. 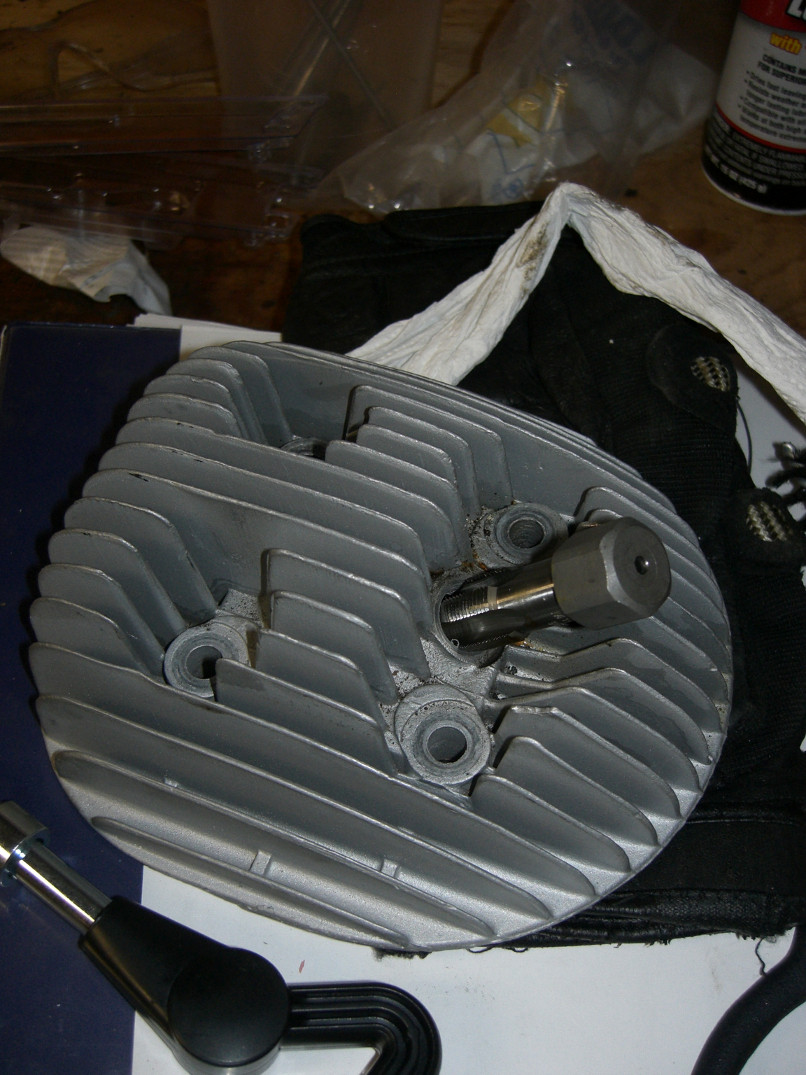 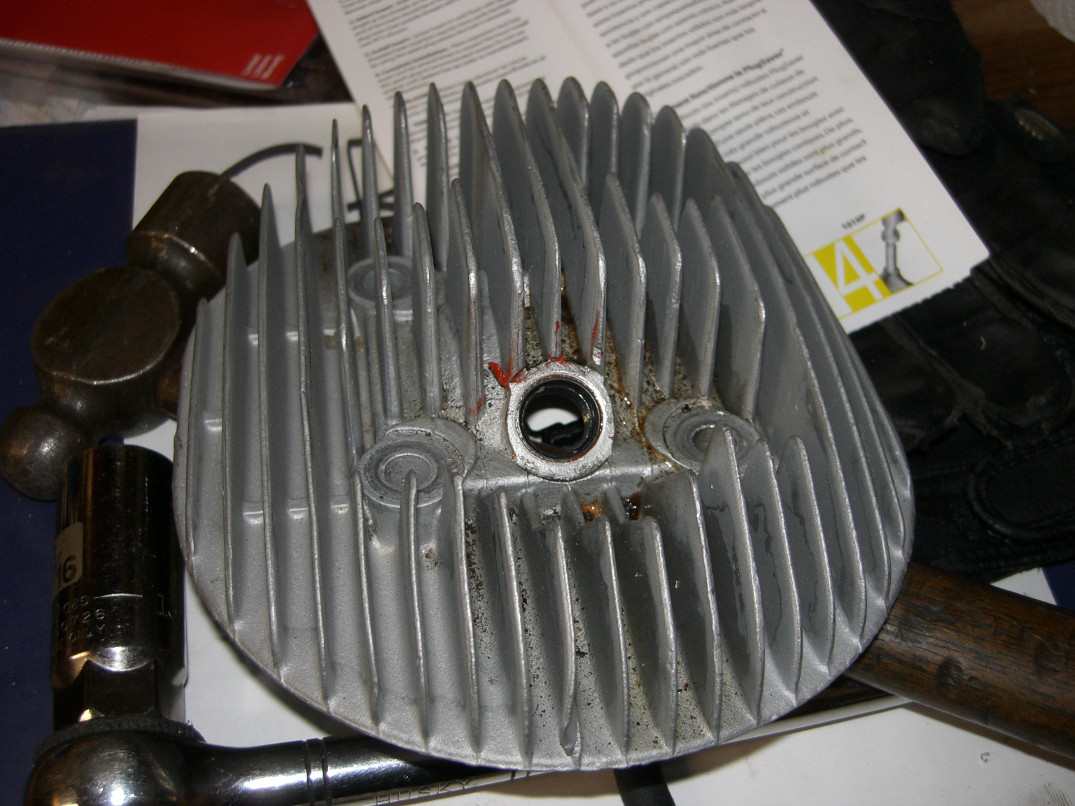 I made a few more repairs to the engine since my last update. The points cam had not been correctly finished before it was shipped to me, and it had a sharp edge at the beginning of the lobe instead of a smooth, curved transition. This sharp edge literally ate away the contact surface of the points arm, which killed the ignition and prevented it from starting. 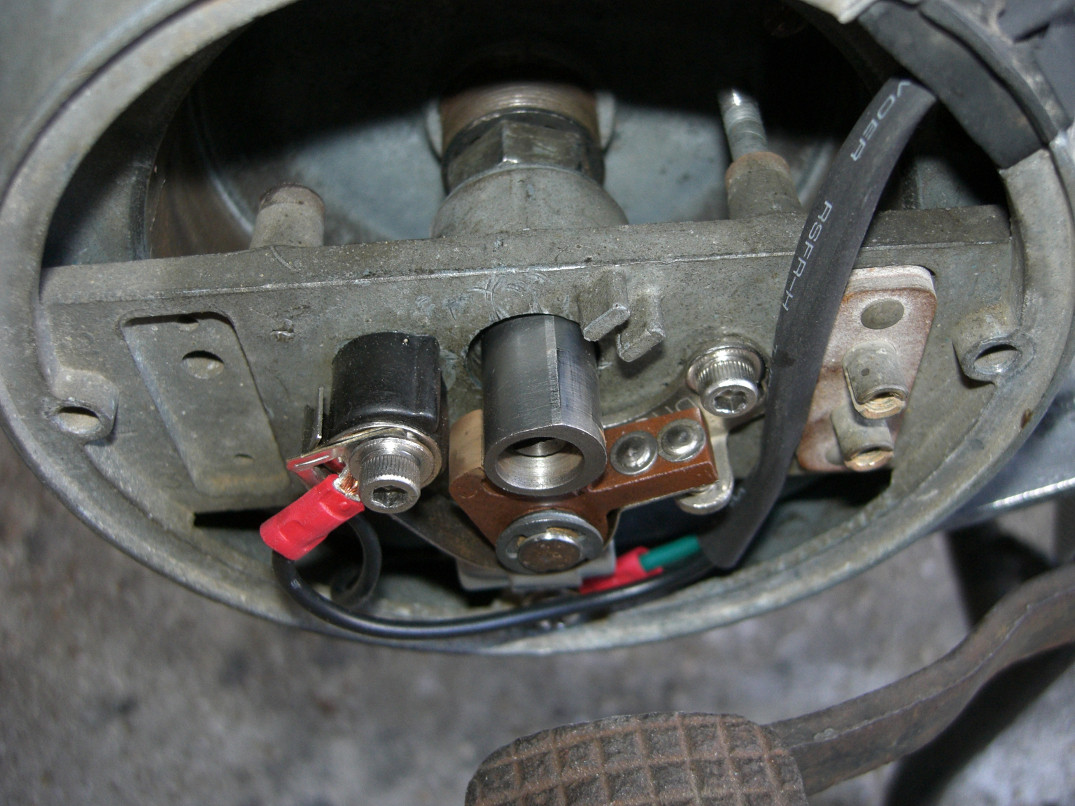 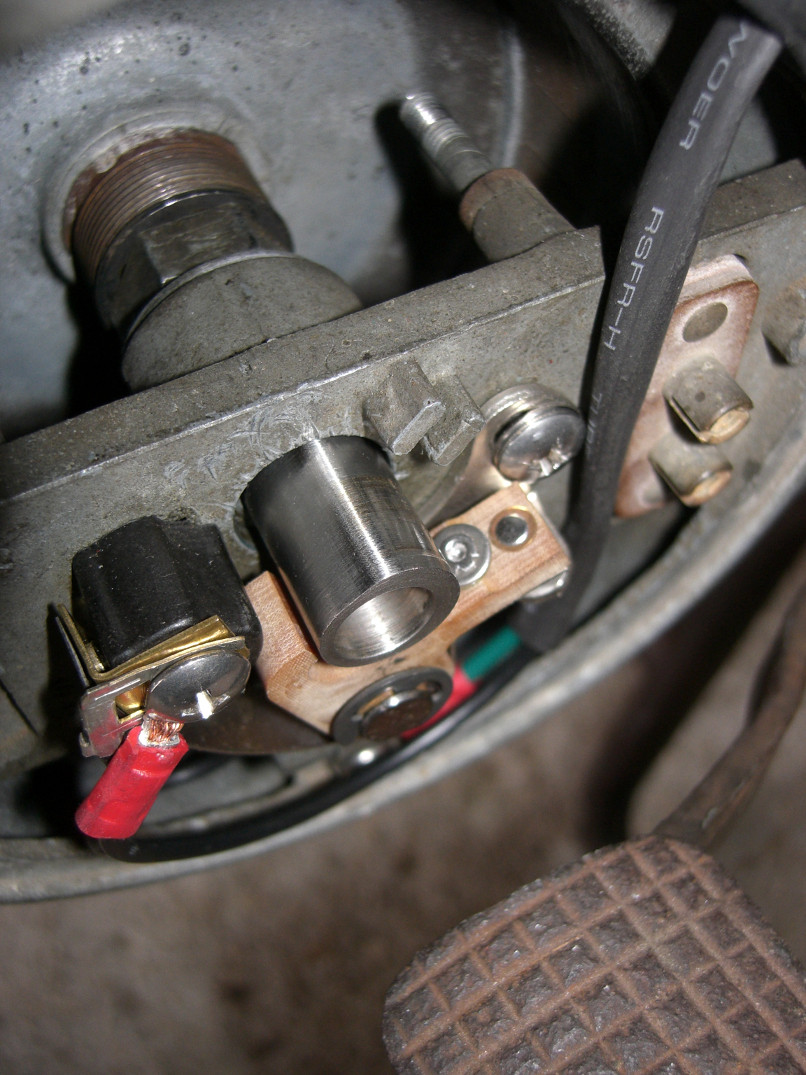 The bushing on the timing plate had completely worn out, so I pressed it off and replaced it with a new one. I used a bit of Loctite 680 to make sure it stays in place. 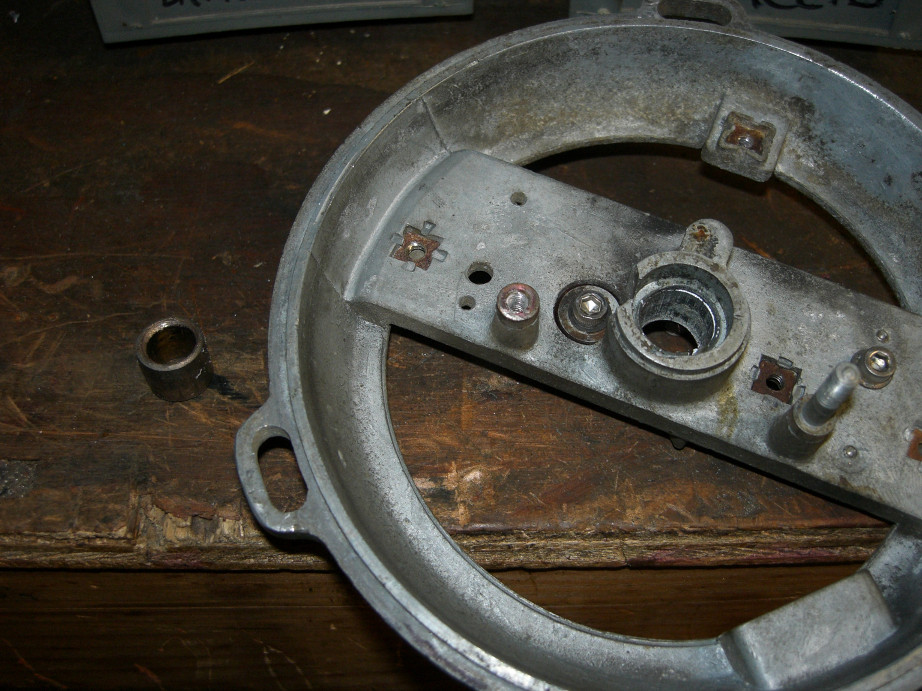 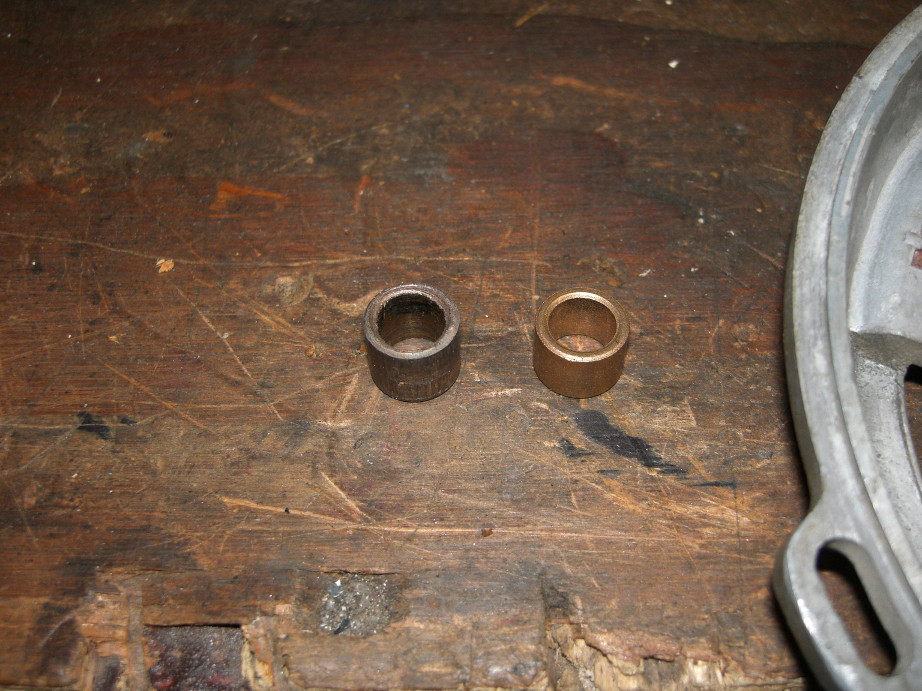 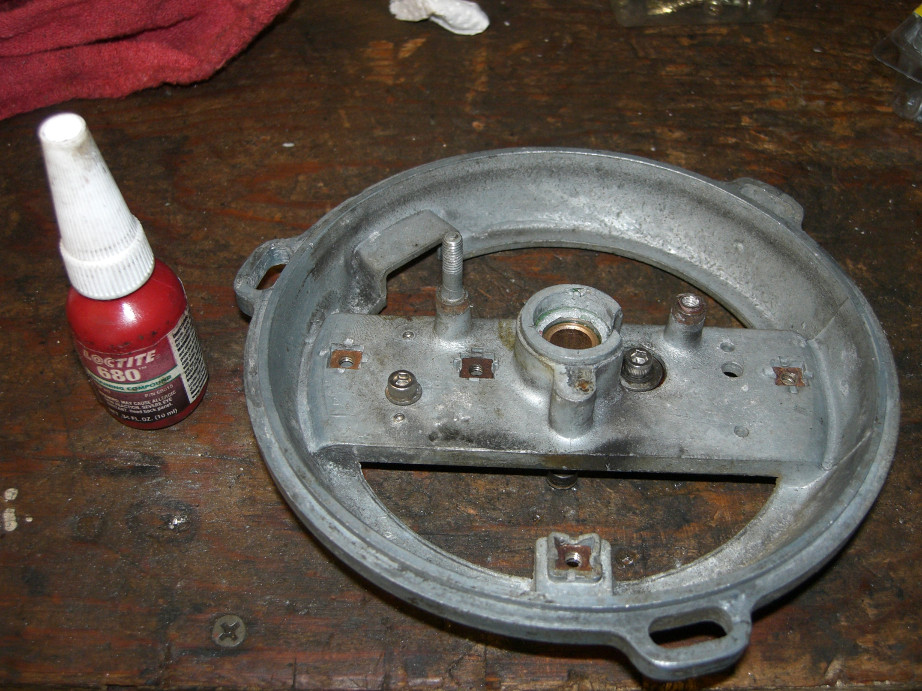 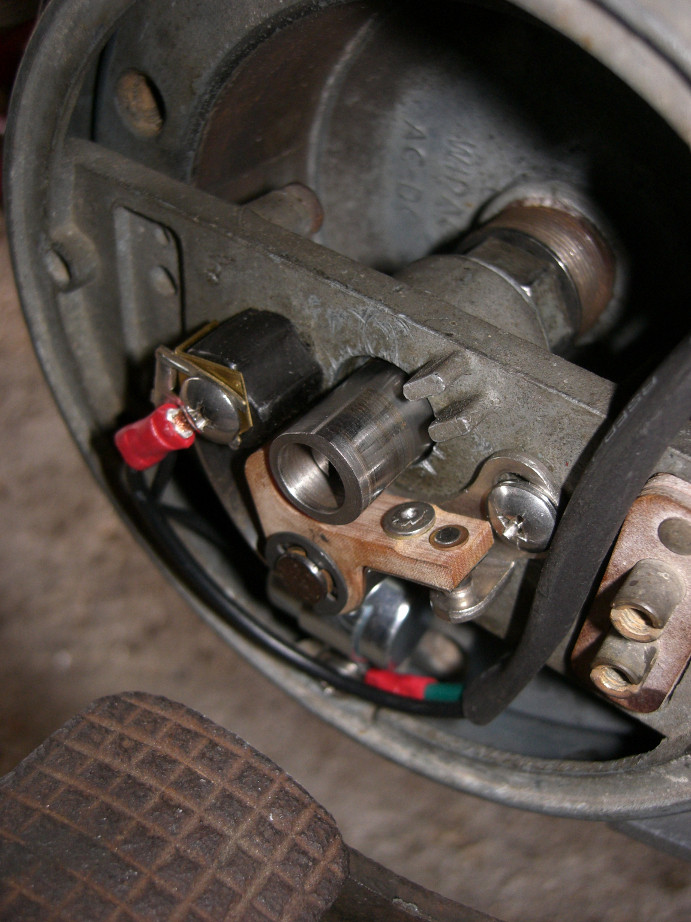 Give that man a medal!

You must really like that bike, congratulations on your dedication in getting it back together and working from such a poor initial state. As for batteries, I have a gel battery (12V, 7Ah) that fits in my D3 carrier for it's total loss lighting system. On end it just fits in the carrier.

I had a Bronc for a short while and regret selling it on.  It had a bent frame so I sourced another loop which was very close in number.  My current bike is not, and never was, a Bronc but it is stripped down like one and has the short upturned silencer. It runs on the original points but with a battery in an aluminium cradle under the seat and an external coil, starts and goes well.

Where did you get the exhaust pipe? I had to bodge one from a long D1 pipe and I'm not too confident of my welding so could do with a replacement!

Ive got a bushman like front guard (non valanced) which I could let you have if you were interested.  PM me if you're interested and I'll send some photo's.

Hey stubaker58, that is actually the original exhaust system. I spent several evenings going through packages of Scotchbrite, steel wool, and metal polish, and the chrome came right back 🙂  I also had to braze one of the baffle cones back into place. And thanks for the fender offer, but I'm going to stick with the valanced one I have. I like that the color and rust are a close match to the rest of the tin 😛

Hey Sunny, you have a parts book specific to the Bronc model? I wasn't aware one existed! I am keeping an eye on the plug insert, and so far it is holding. the top two threads are actually knurled, and they are designed to be spread and spiked into the cylinder head with a special punch. I will have to add a points lubricator this winter while I'm rebuilding the wheels and brakes.

should it not have a front mud garud ? whot inlet manifold have u used

Originally it didn't have a mudguard, but I am planning to put it back on the road. The inlet is a rubber adapter from Rex Caunt, mated to a VM26 Mikuni.

Well done you must be very pleased with the outcome

Wow you have done some good work on getting it working, you should be pleased with what you have achieved.

The original front rim on my Trail Bronc was completely rotted away, but 40-spoke rims are difficult to find in the USA, so I left it alone during the original rebuild.Because of this, I used the bike very sparingly, for fear of the wheel collapsing.

Then by chance, I met one of the owners of British Cycle Supply Co. at a Land Speed race in 2017. He took me for a tour of the warehouse, and showed me the racks of brands new replacement wheels, which immediately rekindled my interest in this project. 3 months later, I re-laced the wheel, replaced the bearings and brakes, and reinstalled the lighting. 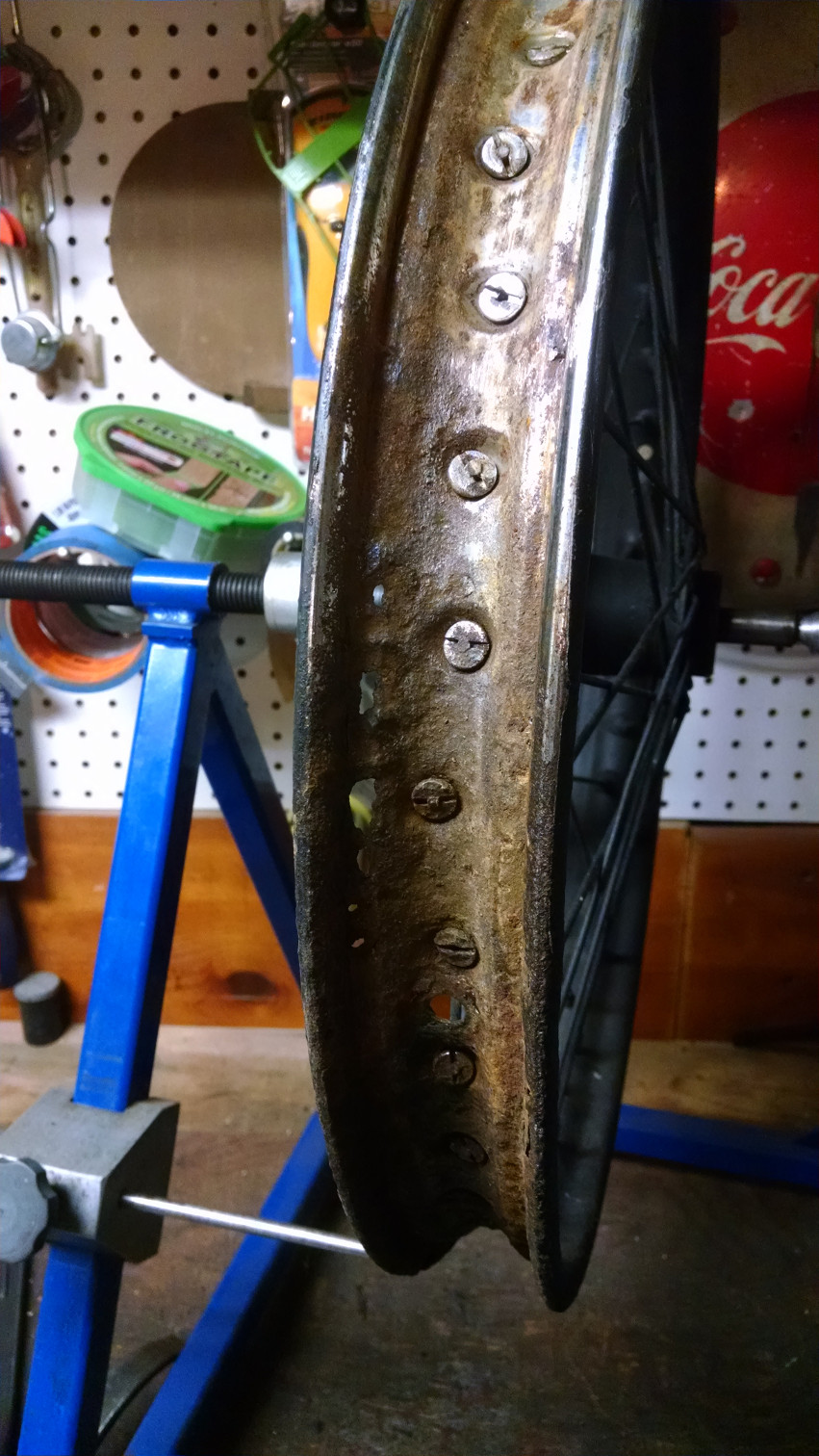 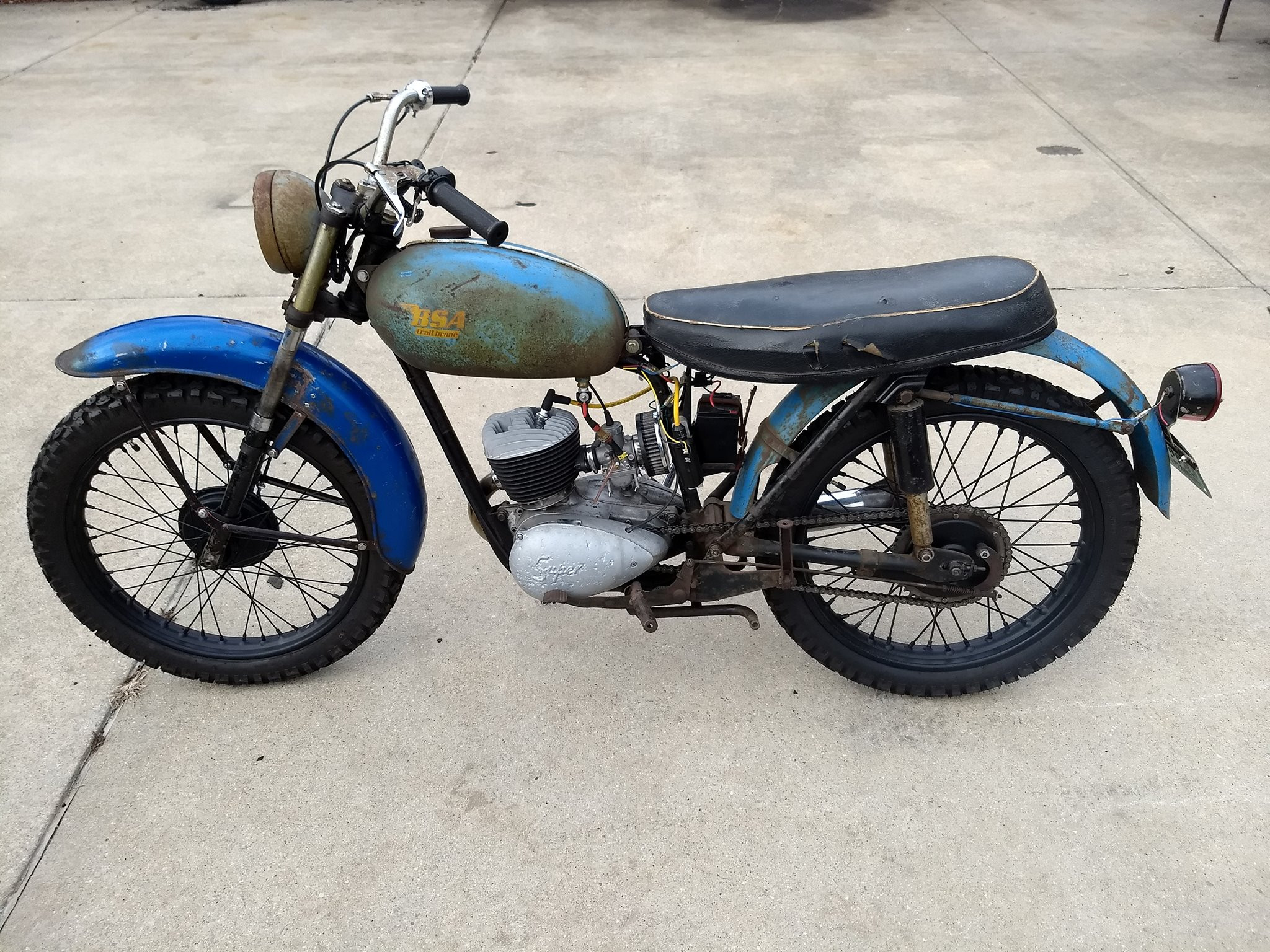 Well done, John. You must have loads of patience to take on such a restoration.

Great work,love the patina,good to see a bike with much of its original character in tact.

I wont comment on the front mudguard,it`s already been covered 🙂