I should have been doing a project thread for this bike from when I got it more than a couple of months ago, but I was just too busy and basicly took almost no photos so I have decided it is best just to start from the point it is at now:

It had been off the road for at least 25 years and had its alternator/magneto removed and in bits. I was able to cobble together a charging system and have used a 6v ignition coil rather than the magneto. It is now running well, MOTed, taxed (£0), insured and in use more or less every other day. 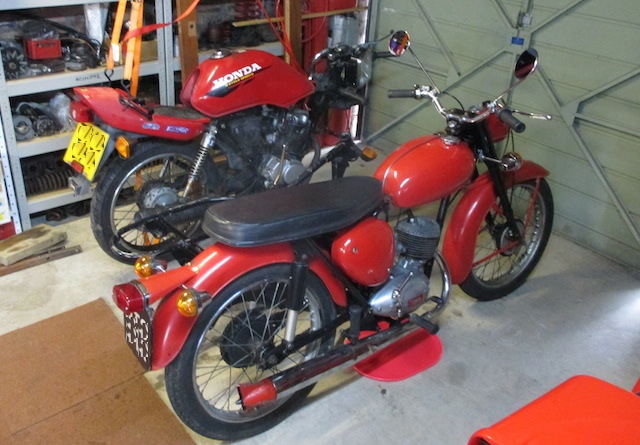 If I have done it correctly there should be a picture above. (The Honda CG125 is to donate its engine (and possibly other parts) at some point to the D14 frame that is sitting between the two bikes.)

I have a question regarding the alternators on these bikes. Picture below should show two types of coil windings:- one on the left is thiner wire and I estimate that it has about 200 turns on it where as the one on the right is thicker wire with something like about 130 turns. My assumption is that the battery lighting would use two of the 200 turn type and the direct AC lighting would use two of the thicker 130 turn type.

Does anyone know if this correct? I have used three of the thinner type with battery and ignition coil. It seems to be working and not over charging the battery. I am an electrical engineer - amongst other things - so don't worry about being highly technical with explanations. 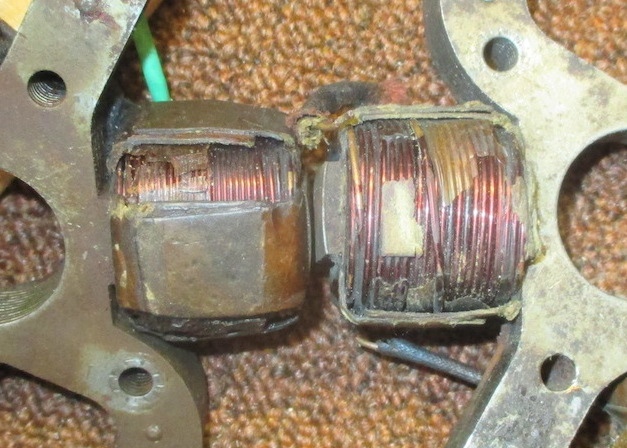 Yes, you are right, it is a single switch Bantam. It was fitted with a very dead battery but no stator/points at all. What I got with it was a box of about half a dozen stators in various states of dismantle. Some had the two main windings, a magneto coil and the small trickle charge winding, others were in bits. There were also three, what looked like, new old stock 200(ish) turn windings which I have used as the others looked a bit roasted. I gave up trying to use the various magnetos after damaging the kick start mechanism and fitted the third winding instead so I could use an ignition coil. There is a hidden switch to switch the ignition on and off.

I removed the trickle charge winding as I don't like the idea of having unmatched windings causing circulating currents and losses/heat (BSA obviously were not bothered) but with the indicators now fitted it might be an idea to re-fit one? - will see how it goes.

It now has all three alternator windings feeding the system, even when the headlight is off, as I have the indicators to supply as well. I always run with the lights on anyway but if the battery were to get a bit low, because of a lot of indicating, then I could just turn the headlight off for a bit.

There are no numbers on any of the old stator parts but from what I can gather from the wiring harness and battery fitted (and the engine number) it was originally a battery model with magneto ignition. The diameter of the two types of winding wire are (in new money) about 0.45mm and 0.7 mm.

Hope that all makes sense,

EDIT: I should have stated that I am running the lights from the battery as the wiring harness and light switch suggested that was the way it was originally (it originally switched the two lighting coils to the rectifier when headlight is selected).

Of the 4, one has a larger centre hole which did contain a needle roller bearing rather than a bush.

Also, the measurements I made suggested I was getting about 35 watts, which I thought was a bit low but now know that it is not the case - it might struggle to run the indicators!

I would suggest that as you are starting from scratch, as it were, you convert to a 12V system. In which case you could use your 3 coils to feed a 12V rectifier / regulator to charge the biggest battery you can fit. Then you can still have coil ignition, indicators and better lighting by using LED indicators, tail and brake lights and a small Halogen headlight.

Yes, I did consider changing to 12volts, but only after I had ordered 6volt; bulbs, flasher unit and regulator/rectifier (still to be fitted, if there is any point - it will only create more losses). I did order an electronic flasher unit so that i could switch to LED bulbs - just have not had a chance to source any yet.

I will try and get through the summer with it as is but might do a proper 12volt system over the winter - amongst other things.

Thank you all for the input, But - can anyone answer my original question?

MickP said
Thank you all for the input, But - can anyone answer my original question?

Hi Mick.
I can understand your confusion. I am trying to figure out what those thinner 200 turn coils are used on.
If you go to the link in the post by "mike p5xbx" you will see the various configurations of coil used.
I was asked a few weeks ago to check out a problem on a twin switched D7 where there was insufficient output from the generator to power the headlamp. The twin switched D7 uses the outside pair of coils in parallel to power the headlight and rearlight when the headlamp switch is turned to the "H" position. The headlight is direct AC. The fault turned out to be the coils. They were both the thinner coils that you described. I changed them for the thicker wired ones and the headlamp worked fine. On a twin switched D7 all of the 3 coils in the generator should be the same.
Referring to the link in the previous post, you will notice that the shape of the centre coil used for battery charging of the single switched D7 is different. I guess because it's output requirement is lower due to the fact that the single switched D7 had magneto ignition and therefore only had to trickle charge the battery and not power an ignition coil.
I still don't know what the coils with the thinner wire are used on, but Sunny did mention a generator with a 30 watt output. Maybe an earlier incarnation of Bantam.
Don't ask me I'm only the technical officer !!!
As always learning and open to suggestion.
Good luck.
Mike.