Finally managed to get the correct 18 inch D5 front wheel, it was in a rusty condition but very sound, The chrome was all but perished, not having the time or money to get it rebuilt, I sanded it back to good metal and gave it a coat of krust, then did the etch primmer then primmer and finally sprayed it gloss black, On Saturday I went to Kempton and purchased a new 18 inch tyre,inner tube and rim tape, this morning I fitted it to the D5. I might spray the rear one black to match, at the moment it is spayed silver.

This is how it started off. 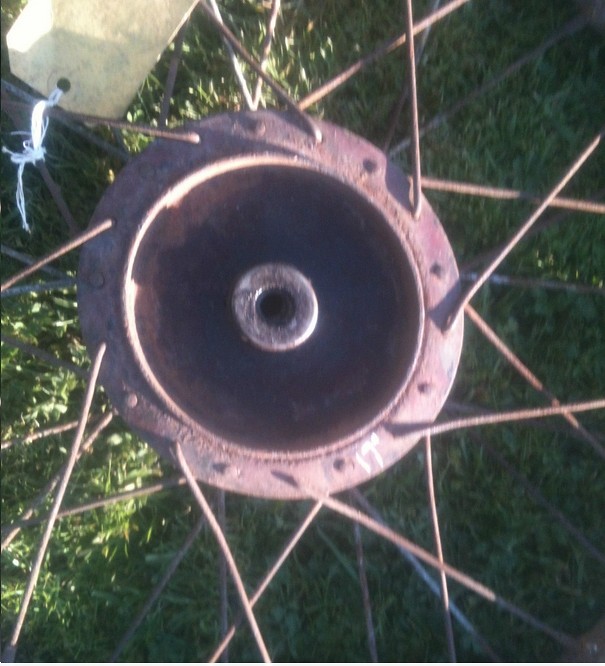 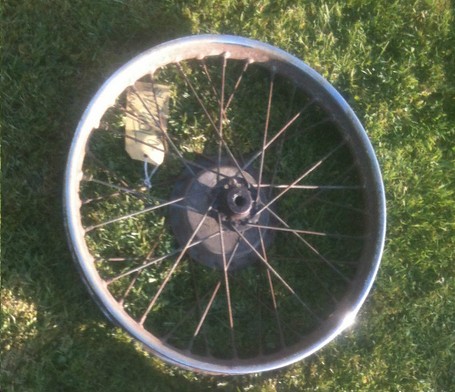 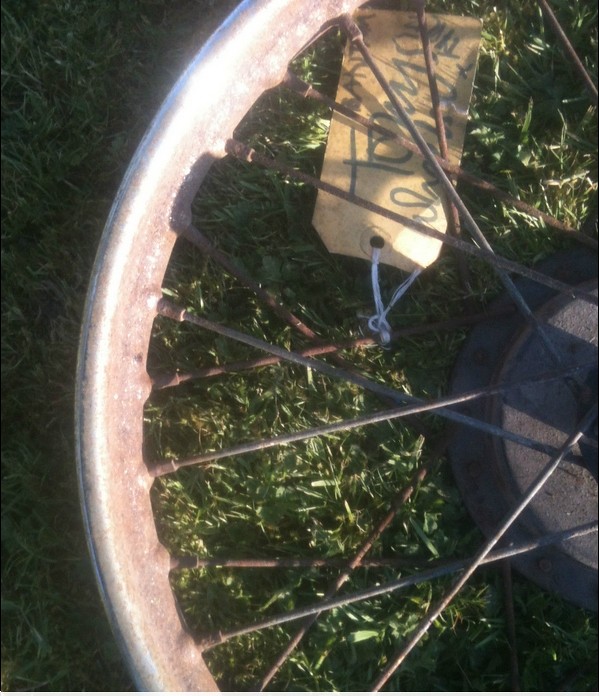 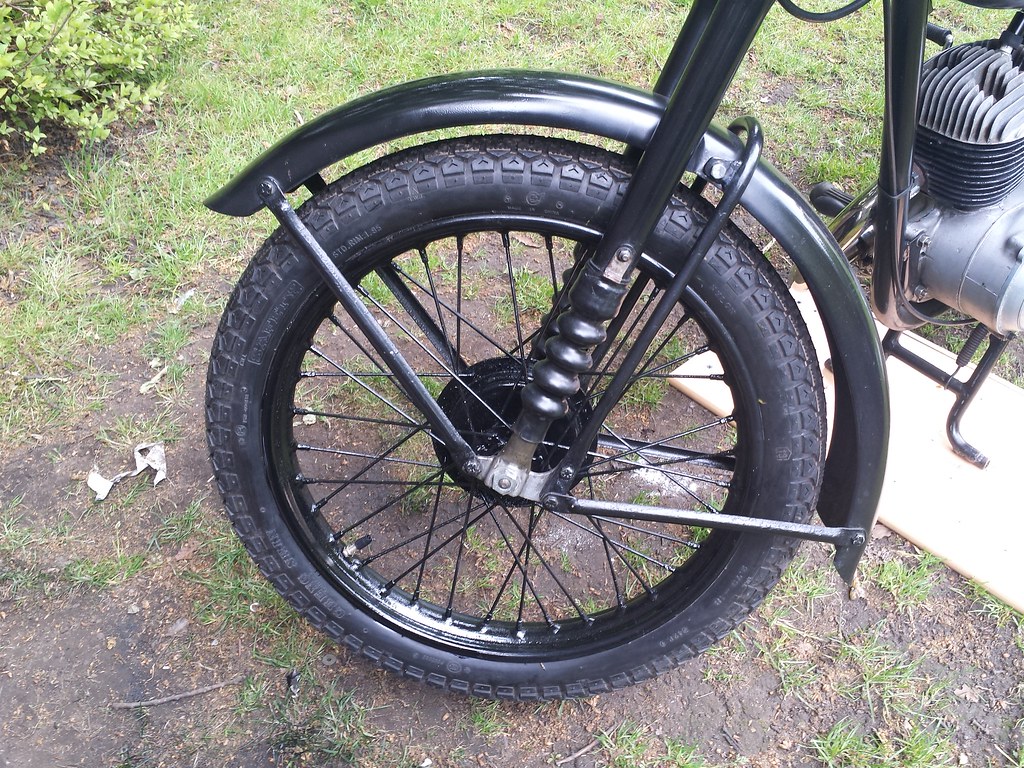 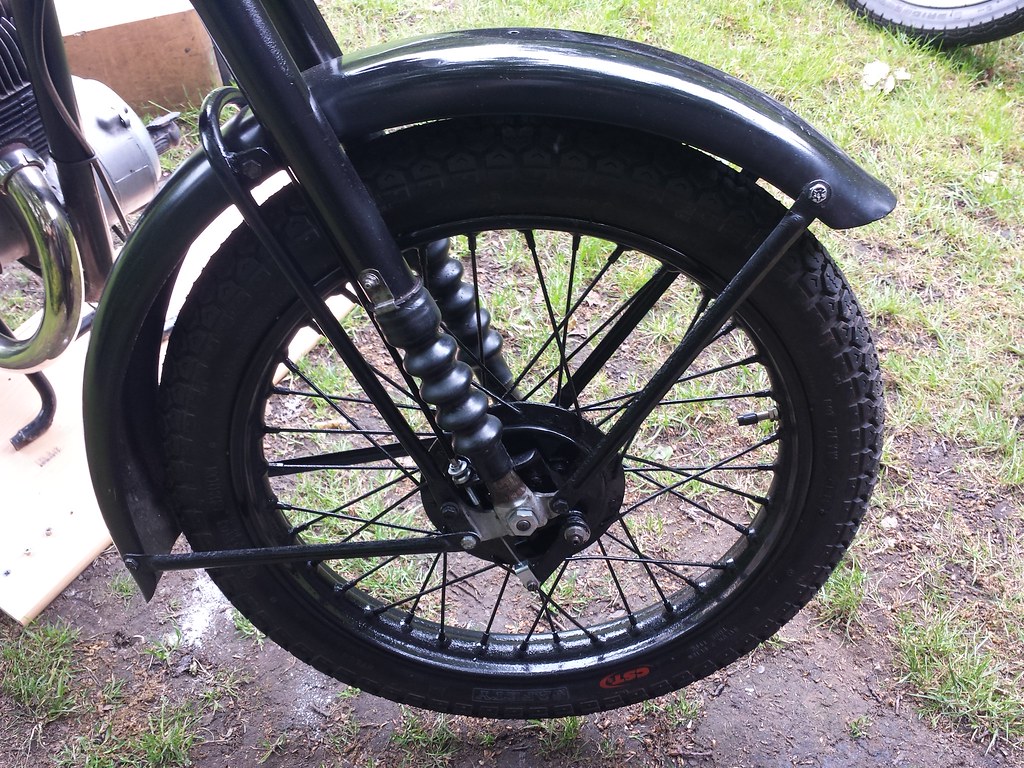 Went for a ride and broke down on the A406, not the best place to brake down, trying to get across two lane and a cycle lane,

This time it was not an engine problem or a fuel problem, the front brake got stuck on and the bike stalled. once on the pavement i knocked the brake arm down and away i went the just as i reached home a car pulled out on me i slammed the brakes on and the same thing happened.  i avoided serious injury for the second time so called it a day.

Once home i removed the front wheel but could not see any reason why this happened. The shoes were a bit worn and in one place worn down to the rivet.

I know have put them in a jiffy bag and will be sending them off to villers for relining. 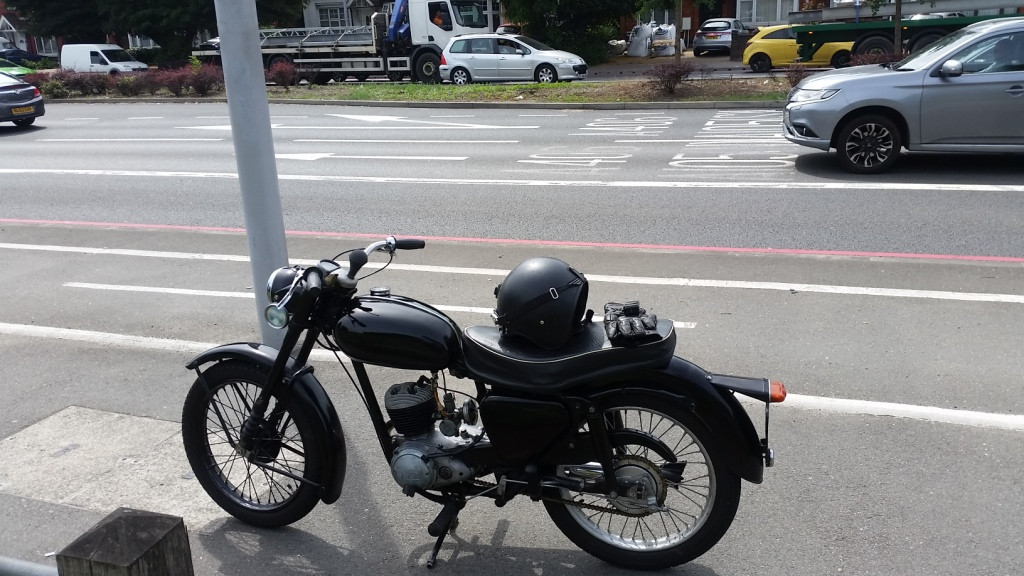 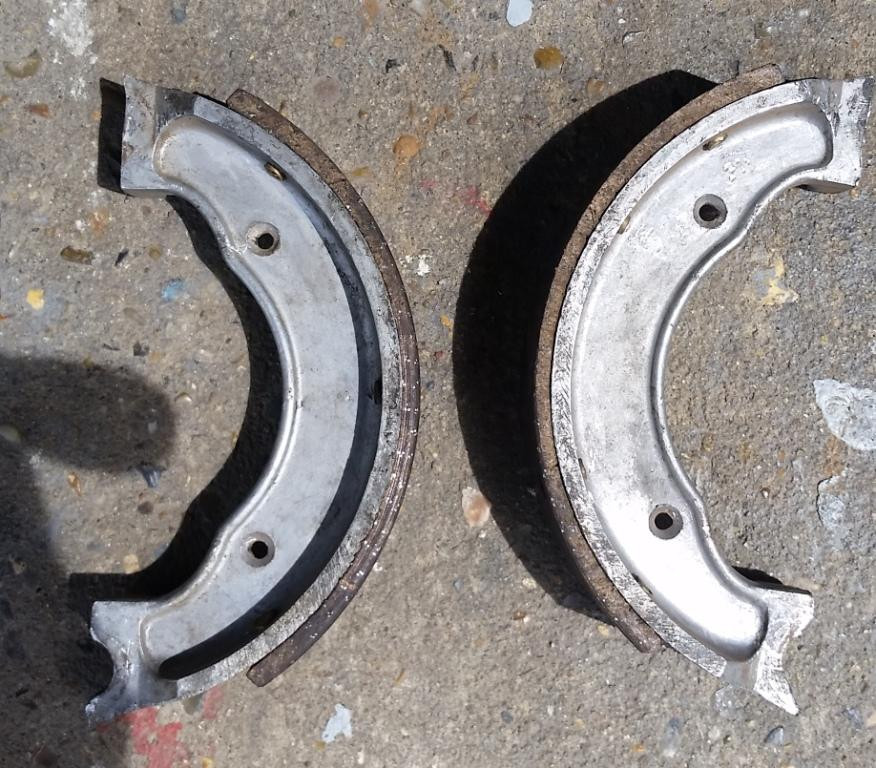 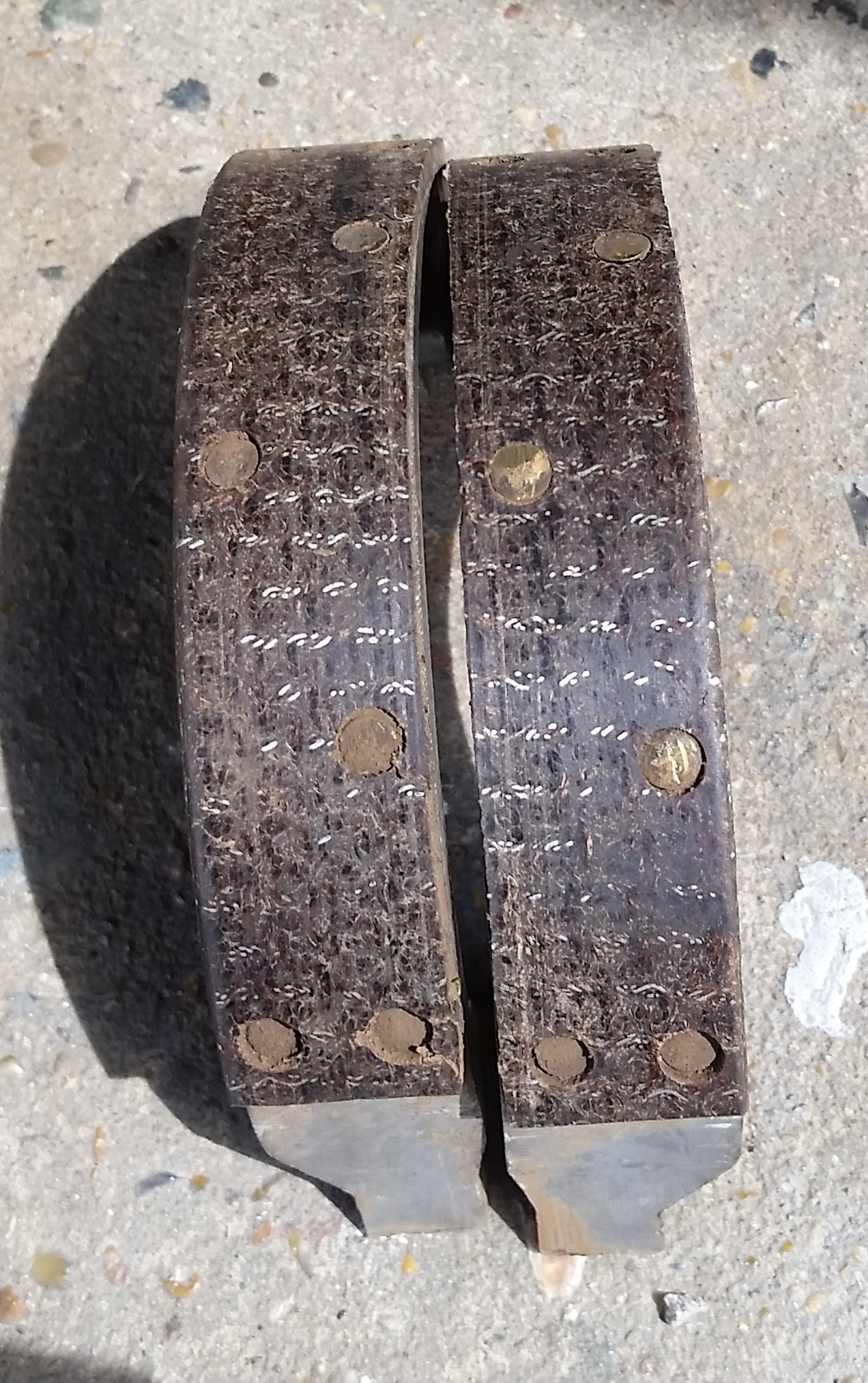 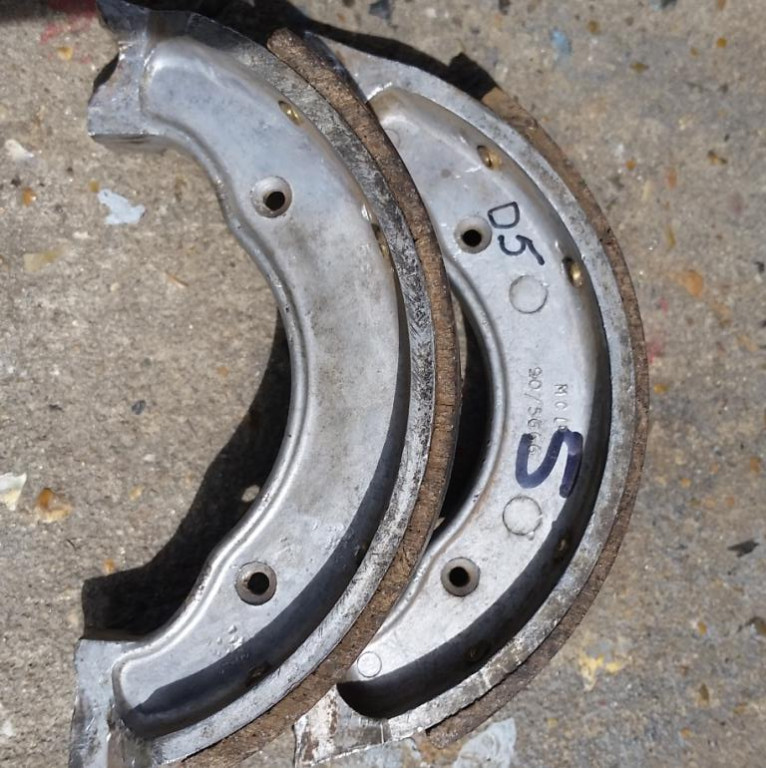 BSAdave said
Once home i removed the front wheel but could not see any reason why this happened. The shoes were a bit worn and in one place worn down to the rivet.

Those shoes from the side looks like there is a load of life left in them. Those rivets must sit quite high to be rubbing with so much meat left. Also, I’m with Mike on this, worn shoes on their own shouldn’t cause the brake lever to lock on, but they might if the drum is worn too, causing the cam to go beyond the point of no return?

Possibly that old front wheel has done a lot of miles and has worn.It does look rather rusty in your photo and may have lost a fair bit of meat to entropy.Might be an idea to check the inner diameter before just throwing some new shoes in there wouldn't  want you thinking youd fixed it and coming a cropper!

To save money you could have drilled that high rivet out and put some packing pieces where shoes ends and fulcrum pin meet...

Thank you for the replies . Sunny i didn't notice that, D5 shoes are hard to come by. In fact D5 wheels are hard to find. I have sent them off for relining and will have to keep my eye out for new ones. I did a search and there was a post about someone using Tina shoes, know i cant find the post.

I got the shoes back yesterday, They have glued the linings on and i noticed that they stamped my initials onto the shoes. Fitted them and they work well, I think i know what the problem is now. The brake cable as too much inner cable so the only way to get the things to work is to move the brake arm right the way round. I have a spare cable and this is exactly the same length, I measured the one on my D3 and it has an inch shorter inner cable. I now need to find a supplier of the correct cable. 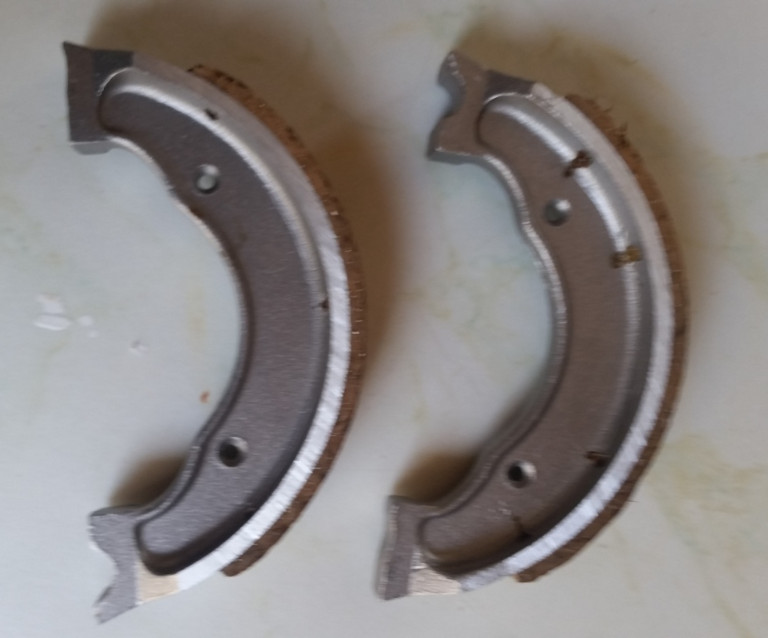 As far as I recall, it's best to fit the brake arm so that it is at 90deg to the cable as the shoes make contact. That way you get the best leverage. Easy to say, but a square mounting hole doesn’t give very fine adjustment!

I got the brakes working correctly then, bang, the gear box has gone big time, i could hear bits of cogs smashing around this happened at the same time i had just picked up the correct D5 air filter .  Now i am laid up recovering from pneumonia .

I have a spare gearbox just need the time and good health to get it stripped down and rebuilt .

Bantam life is not always a bed of roses. said no person ever.

I know its a bit late, but I recently had the shoes out on my D3, and they had a steel plate formed round the cam end of the shoe. Part of the shoe, and not removable, but presumably to stop the wear evidenced on your shoes caused by the cam.

I would expect that back in the day it would have been possible to obtain "spurious" parts if you were a cost conscious bantamite, and they may not have been made to the same standards as genuine items and were probably considered as throwaway items  after one use.

I would be tempted to make some plates to protect the end where the cam rubs, bend them to fit over the end of the shoes, and when in place the washer on the cam will hold them in place, if you see what I mean, it will also take up a bit of wear that may be present in drum.

It's more of an 'improvement' to braking efficiency, I think. The idea being that a bit of extra packing allows the shoes to contact the drum earlier, or at least to prolong the usable life of the shoes.

Have a look amongst ** Please log in to view **. There is also a post covering sls brakes in the Tech Archives / FAQs

Is the 'krust' mentioned up thread Hammerite Kurust? If so, do you just paint it over the piece and then spray primer over it? Ta.

the front brake got stuck on and the bike stalled. once on the pavement i knocked the brake arm down and away i went

My D3 of years ago did this when I first stated using it, but only when the drum got hot and expanded. So not immediately obvious (no problem while cold or checking it at home). I got used to reaching forward with my right toe to knock it off. It need new shoes of course, which it duly got. No more seizing.

Hi bantammad ere just a pointer putting a steel shim on the flat end of the brake shoe to gain extra lift is an old trick first to get more purchase on the shoe lift on to the drum, as you say many’ bike brake shoes are fitted with steel ends , how ever the other thing to be taken into account is the wear on the brake cam it’s self ie top and bottom leading edge of the cam wear here reduce the effectiveness of lift on the brake shoe, so you can turn the cam round 180.deg  and use the side of the brake cam that’s not had wear,  you can also make 0.062 thou shims so improve brake purchase on the brake drum get me drift maybe help some body regards Les