I knew from what I had seen on the web site that I would probably lose the emergency start which was no problem . But what I got was when the head light was turned on both it and the rear light pulsated ( flashed ) now seeing if I am  correct the same coil is used for the emergency start as the head light . Would it be that the rec/reg is some how interfering with the light making it pulsate ? the charging side of it works . Putting it back to original the lights work ok .

it is wired from the generator

no1 white to rectifier

no4 orange to rectifier

The wiring harness is correct and the generator is virtually new as both were bought from CD autos several years ago then the bike was laid up for several years so they have not had hardly any use .

I did run a a wire from the battery to the head light after disconnecting the ac wire but that was no good as also said on the web site as the charging could not cope with it . So does any one know of a way that it could be wired in with out being to complicated I have had a look on the forum to see if I could find any info on that but so far no luck probably on there so will carry on looking .

Hi, sorry I can`t be of much help, but I have just fitted a rec/reg on my D14, and I know when I was shopping around some were specifically listed for dynamo models, and others for alternator models, are you sure you got the right one.

This is the wiring diagram from Rooster ignitions when they were selling them
whether it works ok I don’t know
D7 T/Sw is peculiar in using AC to the ign coil when switched to Emergency, note the two Maroon wires going to the coil
don’t think that would do the R/Reg much good 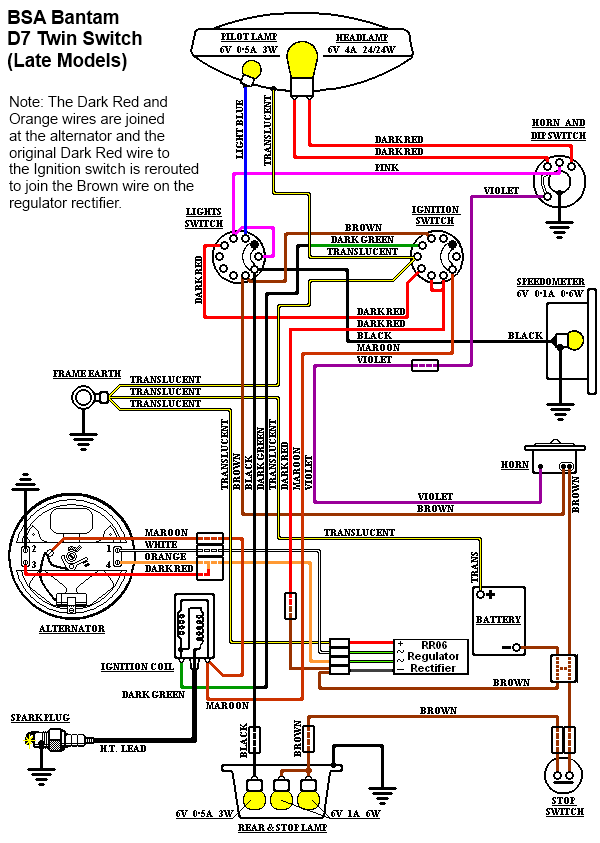 Thanks for that Mike it gives me some thing to think about as I really would like to do away with the lead acid battery's  . I am running my dynamo charging bikes on gel battery s it is just the Bantam s to change . It is good not to have to keep charging and replacing the battery because it has no last unlike the modern gel which seem to go for a lot longer .

Oh yes, I have seen this diagram before and was not happy with it.
In it's standard form the twin switched D7 headlamp is powered by the lighting coil of the generator and will therefore only work with the engine running.
In the diagram from Rooster ignitions the dark red wire that powers the headlamp is connected to the battery. The idea being to convert it to battery powered.
That will work but unfortunately if the ignition switch is turned to the "E" position it will cause a short circuit when the points are closed.
The answer would be to remove the maroon wire from the ignition switch to the ignition coil, thus removing the emergency start option.
There is also another problem with that diagram, the dark red wire from the generator on pin 3 is connected to the orange wire on pin 4, I am sure the thinking behind that is that all three coils would be connected in parallel. Unfortunately that is not so as one end of the lighting coil is connected to earth.
The only way around that would be to remove the earth connection at the lighting coil and connect that coil end to pin 1. That would put all three coils in parallel.
Hope that makes sense.
Mike.

Thanks Mikef tried it this afternoon connected as you said the 3 red to 4 . And the white wire 2 to 1 as that was coming from the coil to earth 2 pin . But unfortunately it did not work so it looks like it is back to lead acid battery . So it looks unless some one has used one of these r/r and it worked I will have to give up on it .

Unitminor said
But unfortunately it did not work
Brian

did not work in which way ?

Yes the connections are like that if I did it rite I connected the dark red t3 to the orange connected t4 . The white wire t2 which was earthed was disconnected from earth and joined to white t1 .

I have now got it working by leaving 1 & 4 as connected going to the rectifier ac in . The breakthrough was disconnecting the dark red from the ign switch and connecting it directly to the lighting switch . I have had it running with the head light on and all seems well the generator is showing a charge on the amp meter and the head light is working at a steady beam .

well done perseverance always pays off in the end,