I am about to replace the brake shoes assembly on my d7 bantam (1961 reg).

Due to the fact , as several of you have mentioned,  the braking efficiency is dire !.

I have in the past when owning other motorcycles,  used a copper grease smear on the cams mounted within the brake plate.

This was in my opinion,  the best option for avoiding unnecessary wear between the cam and shoe , plus from the cable to brake lever pivot.

I imagine this question may have asked of members in the past, but I cannot find any answers related to this.

Any advice would be appreciated,  as I am refitting the front brake/wheel in the next few days.

Yes, copper grease will be fine. I also copied this mod from ** Please log in to view ** which worked on my D1 front brakes and gives a bit more bite. If you have an old pair of brake shoes kicking about you could experiment on them first.

Thanks to you both for your help.

I am reluctant to try it, but as I have ordered a new set, what's the harm !

I know what you mean but I did notice a significant improvement. I won't be flying over the handlebars or anything but every little counts....

Just getting my head around this and I'm thinking if your going to remove that much material from the trailing shoe you may aswell take the lot off no?I mean even if the leading shoe pulls it into the drum the rear isn't going to touch anyway ? Effectively leaving you with a single leading shoe drum brake albeit a more efficient one?

Brakes are a bit of a dodgy issue though and wouldn't try it unless you're confident the shoe isn't going to disintegrate on you lock the front wheel and throw you under the nearest bus!

We had one guy on here recently had his front brakes lock up as the cam went too far because there wasnt enough meat on the pads luckily he didn't come to any harm.

I know I may be over egging the pudding but bad things do happen out there and wouldn't want something stupid to happen.I'll probably get lambasted for being a kill joy but were talking about brakes!

Yes I know the standard ones are rubbish but at least you know where you stand with them.

I'm sure sunny mentioned he had a twin drum conversion on one of his bantams???

I think you miss the point. The braking efficiency is not just about the amount of lining contacting the drum.

The reason that many single leading shoe brakes are inefficient is that, because the cam works on both shoes simultaneously the trailing shoe can sometimes touch the drum first, preventing the leading shoe from contacting the drum firmly and depriving it of it's self servo effect.

It explains why some brakes of exactly the same type are better than others. If the arrangement of parts happen to allow the leading shoe firm contact, the result will be a better brake.

Having said all that it is possible to overdo it and end up with a grabbing brake.

Reference a twin drum Bantam front brake, if you have a ** Please log in to view ** you will find pictures of Mole Benn's racer fitted with one, but it still wouldn't be effective if the trailing shoes prevented firm contact of the leading shoes.

If you need any proof that the self servo effect is valid, just try driving a 60's/70's drum braked car. They usually had twin leading shoe front brakes and single leading shoe rear (due to needing a handbrake that would hold in both directions). Braking in forward motion was quite acceptable because you had six leading shoes (invoking the self servo effect) and two trailing. Braking in reverse motion was frightening (especially on a slope) as you only had two leading shoes and six trailing. Considerably more effort was required to stop the car in reverse as the front brakes (now being all trailing shoes) were having little effect.

I get it piquet I'm just not sure taking an angle grinder to your front brake linings is necessary best practice.

I'm assuming most of the guys on here have a certain amount of technical ability (wouldn't be riding around on 50 year old motorcycles otherwise)but should a classic bike club be encouraging people to mess with something as serious as brake linings in the vain hope of gaining a bit of braking efficiency?

Again it's one of those things ,its your bike etc just think its sailing a bit close to the wind is all.

Put it this way I know our machines technically dont need mots but if you took it for an mot and the inspector discovered what you had done would he pass it or condemn it? 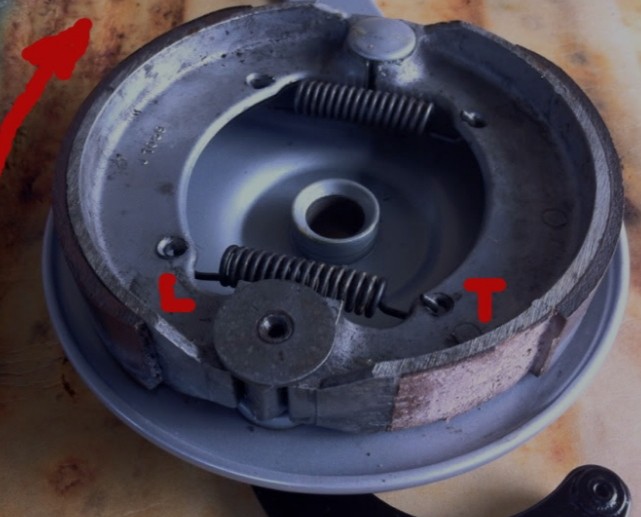 If they didn't see it and it passed an efficiency test it would pass.However if the tester was aware of it it wouldn't as it would be classed as a delaminated shoe and any known failure of brake components is an immediate fail so do at your own risk!

I know it's worked well perfectly for me and the thread it came from is one of the most impressive and informative restos on the site. Now, 8 years and 39,000 views later, I can't remember anyone reporting back saying they've had a problem if they've used that tip. I didn't take an angle grinder to mine. I just used a junior hacksaw and took a little bit off where indicated in the pics. I doubt very much, that if we needed to get an MOT these days that they would be dismantling the front hub nor would they know what they were looking at if they did. But as you say, Spaced, each to their own.

Stoo63 said
I know it's worked well perfectly for me and the thread it came from is one of the most impressive and informative restos on the site. Now, 8 years and 39,000 views later, I can't remember anyone reporting back saying they've had a problem if they've used that tip. I didn't take an angle grinder to mine. I just used a junior hacksaw and took a little bit off where indicated in the pics. I doubt very much, that if we needed to get an MOT these days that they would be dismantling the front hub nor would they know what they were looking at if they did. But as you say, Spaced, each to their own.

I get it Stew and 99.9% of the time youd probably be ok and if it works for you fine.Its just the fact someone actually had a brake literally lock on them recently due to low pads and the cam locking at 90 degrees.Luckily nothing bad happened but it gives me the Willie's just looking at it.Once the pads have worn your back where you started anyway so it's not like it a permanent improvement anyway.

I've had front wheels lock on me twice in my younger days(sharp edge on a front mudguard) so not brakes but it's not something I wouldnt want anyone else to go through is all especially in an open faced helmet!

I appreciate all replies regarding the front brake and safety issues , which have had table tennis style responses !.

As I stated earlier , I was considering whether to remove some pad on the trailing shoe to gain more braking efficiency.

Ironically, due to work commitments, I have not attempted this option.

Therefore,  I agree with your opinion that it is best to 'play safe' and I will fit the replacement shoes and see how the bantam responds.

Considering that I may not be riding it in spring next year due to my own health issues, it will definitely be having an MOT, for my peace of mind.

Link I was referring too.Not the actual shoes but the foot where the cam contacts was worn.Still same applies if the pads get too low or the drum is worn could have been a lot worse.I know being a bantammer means you make do and mend sometimes but brakes are brakes.

SpacedMarine said
.I know being a bantammer means you make do and mend sometimes but brakes are brakes.

Unless they are on a Bantam, then they are almost brakes......

And as for the original question... I tend to use a smear of copaslip (or similar) on brake-shoe cams. Never had a problem. Also on the rear of disc brake pads to reduce squealing. Always the bare minimum whenever there is a chance of contamination.

As for reducing the pads - I have only dressed back an edge (can't remember which) to encourage the servo effect.

Unless they are on a Bantam, then they are almost brakes......

I honestly dont find them that bad for a 50 year old bike.I did give them a good clean with brake cleaner when I reassembled them which may have helped but if you use both brakes they're fine.

I mean guaranteed your never gonna do a stoppie on a bantam like a modern bike unless you hit a brick wall!

Spaced, I can't remember anyone suggesting "chopping the pads in half," nor " taking an angle grinder to your front brake linings." Personally, I remain to be convinced that a serious issue like this benefits from "humorous" exaggeration. There was a scientific explananation provided and anecdotal evidence. Quite obviously, you don't fancy the idea. You've now made that abundantly clear in multiple posts. Each to their own. Tezza will probably be applying a slight dab of copper grease to his cams as per his original question, I would think.

Stoo63 said
Tezza will probably be applying a slight dab of copper grease to his cams as per his original question, I would think.

Just a little as you wouldn't want to contaminate the drum or linings as that would certainly affect braking performance.