Hi all, great site. Following on from my newbie entry. I was lucky enough to pick up a very reasonably d7 engine in bits and had been through the wars. But i still think I have the bases of a running engine. It came as seen in first picture, and I've now opened up and laid out the parts I have. The cases were jammed half opened, but only on muck filled locating lugs and being slightly skew whiff  fitting. So Ive opened up and found the remains of roller pins from shattered small end bearing, i think, and also that some of these had ended up in one of the main output bearings, resulting in seizure. I have ordered bearings oil seals and gaskets, which I await. I am now trying to, first list and then locate anything else which is missing. I can id some of the parts via the Haynes manual I have, but would greatly appreciate any observation your experienced eyes my have. I quite understand that I need to buy many new parts, but would love to buy from anyone out there second hand parts, especially the odd things like screws bolts plates covers which people may not want anymore.  Can I ask about ignitions, recommendations for new system instead of the Wico  type 55 that should be in place. Also thoughts about the cylinder head and pistons in the photo, although rusty should the head be able to be rebored?  I live in Croydon. Look forward to your thoughts. Ken 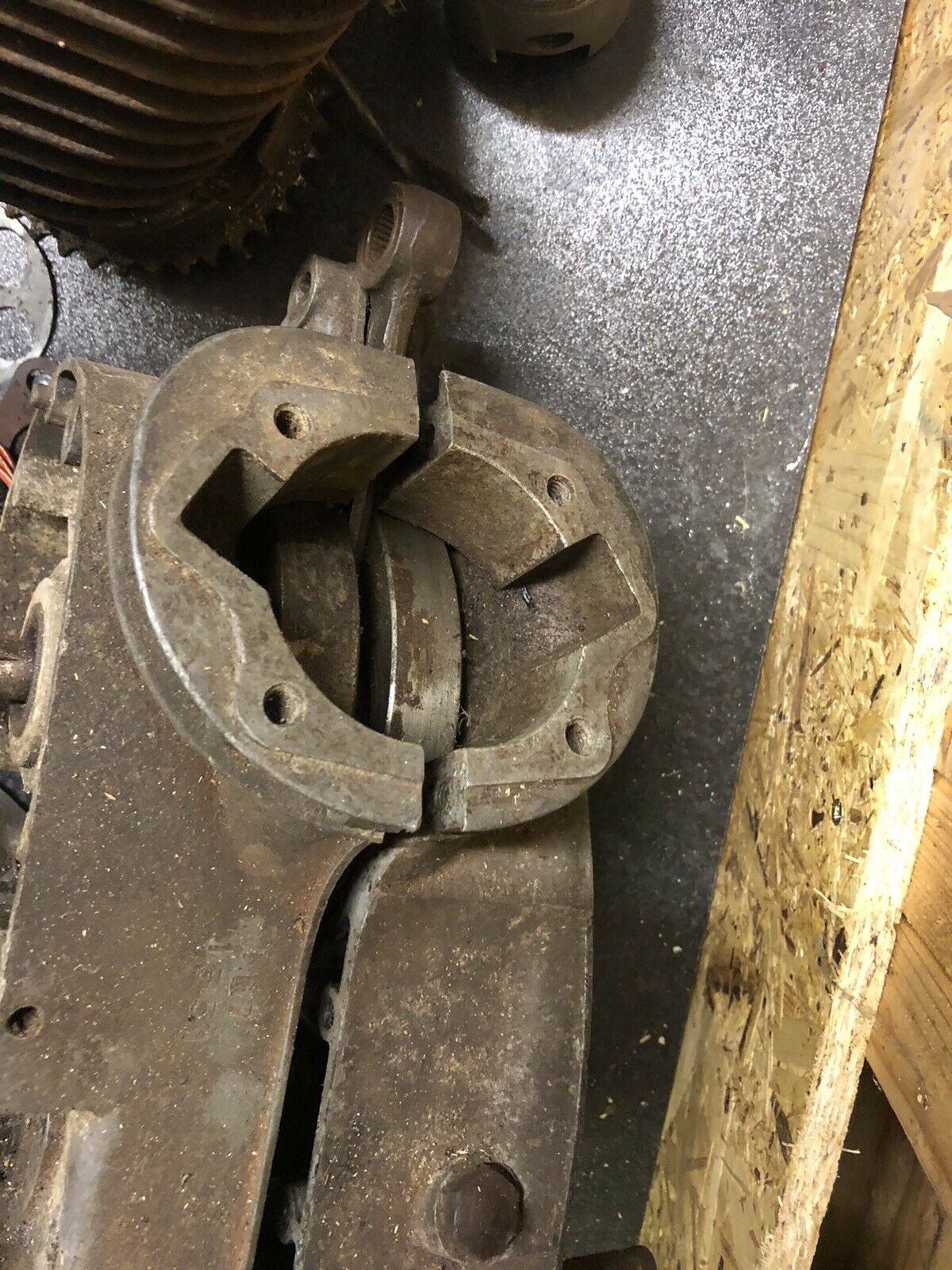 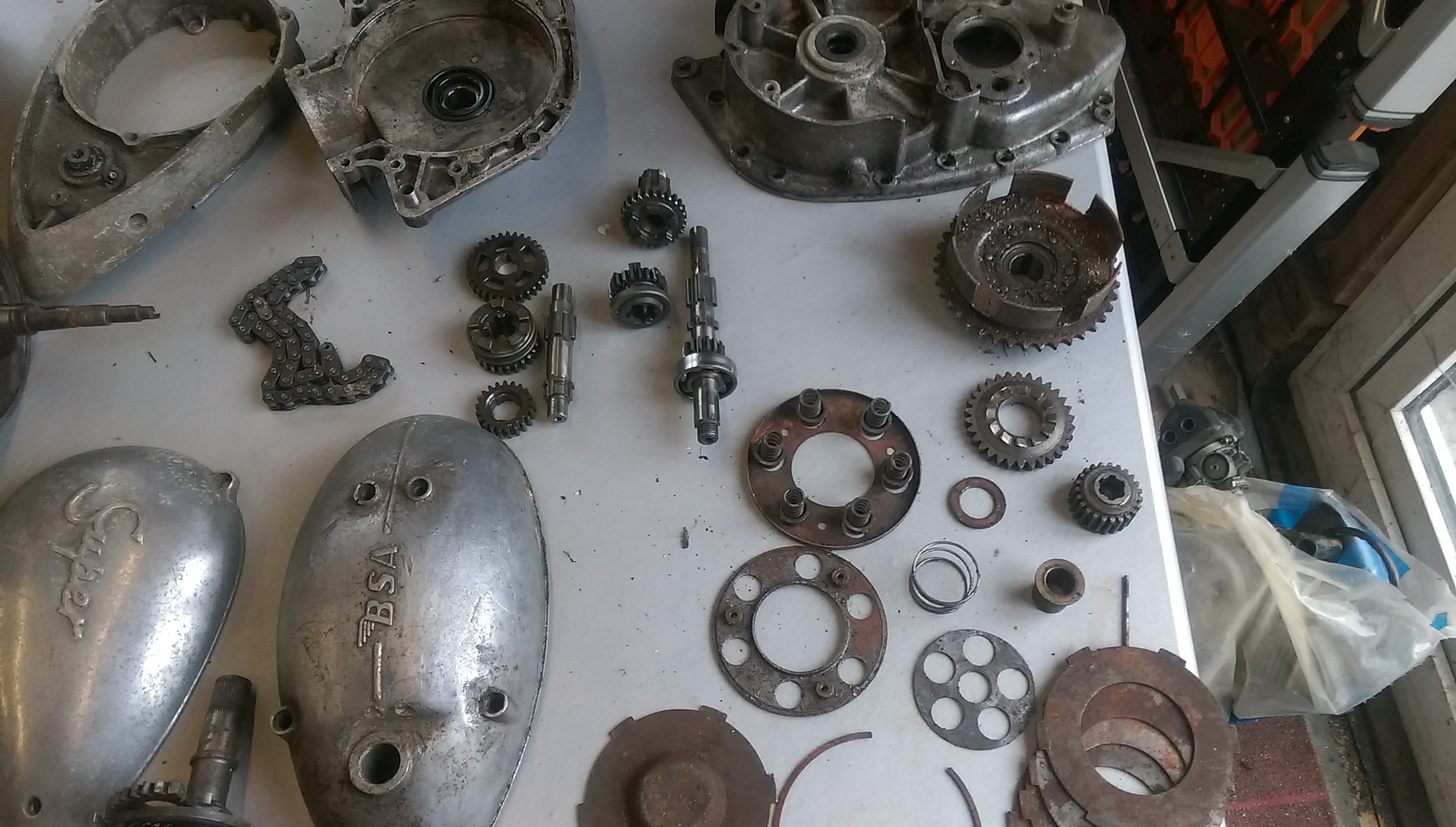 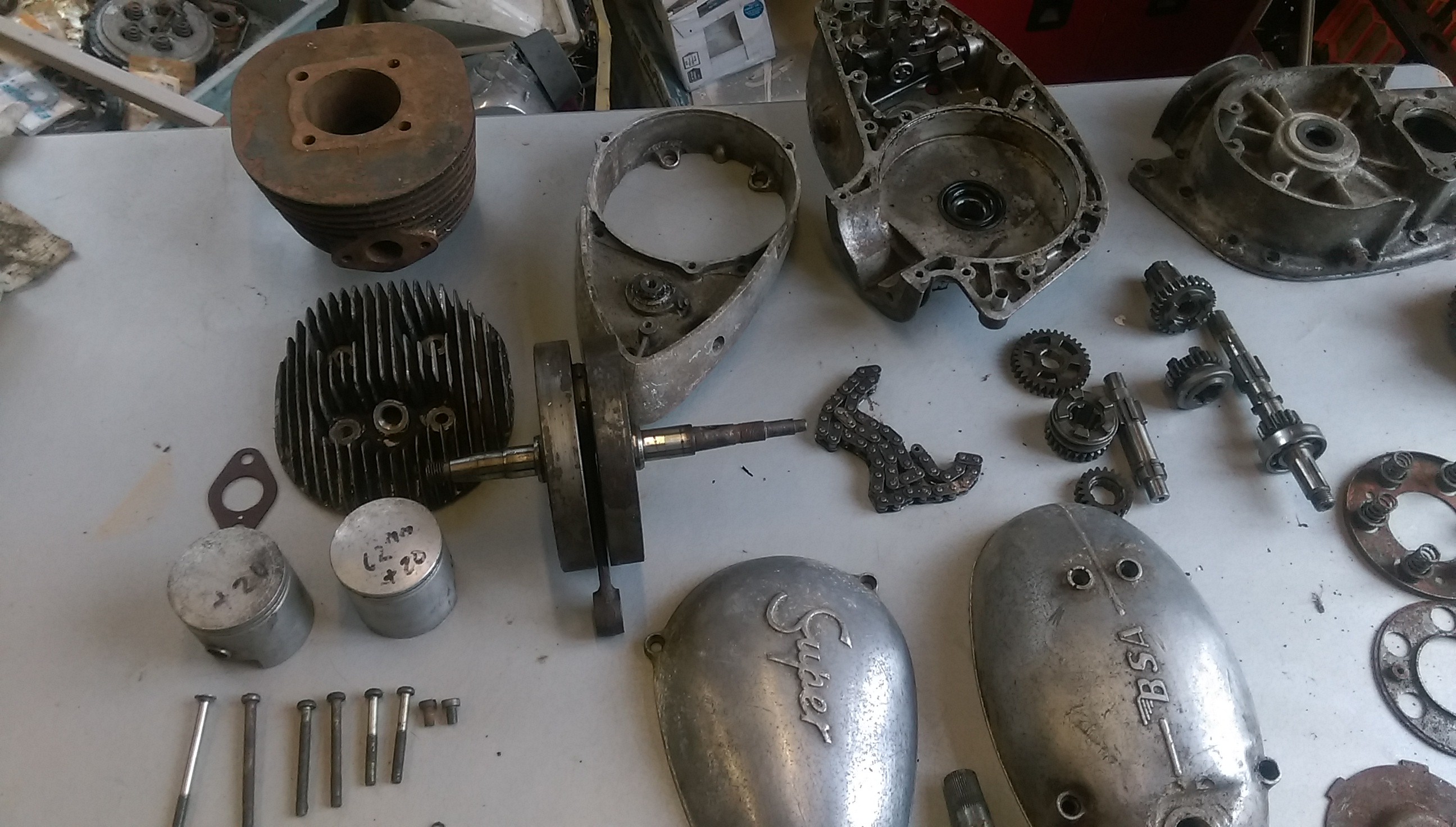 Hi, if the piston and I think that should be a flatopped one for a D7 fits the bore ok I would just run a glaze buster lightly down the bore to to remove the rust, rust pitting is in my opinion not a bad thing as it tends to hold the oil and lessens the chance of piston seizure, as for the conrod if the bigend shows no sign of wear it would be just the case of fitting a new little end bearing a relatively easy job. Regards Basil.

Hi Ken - welcome. The pistons you have appear to be +20 thou, so you should be able to rebore twice. However, you may  be able to get away with cleaning the bore and giving it a hone. I'd suggest de-rusting where necessary (a bath of cheap vinegar is very effective on light rust) before you go further, then have a good browse through the forum, FAQs, etc - it is conveniently divided into sections for the main model types. You can find parts diagrams on ** Please log in to view ** of Draganfly Motorcycles. As for ignition, there's plenty of opinions on the forum (check FAQs), but there is nothing wrong with the WIPAC system if properly set up (and it's a lot cheaper!). Depends if you have the parts, I suppose, though you can usually source them on here or various internet sites. Be aware though - you won't get your money back after 'restoration'.

Thanks guys, already a few good tips. the engine number is FD7 1331, which i think is a 64, perfect for my 65 bike. Im already raiding the kitchen cupboard only have white vineger, i will give it a try. and already looking on ebay for a glaze buster. Which i'd never heard of. The pistons look unused and feel too big, so maybe not part of this engine. The guy I brought it from said it was a job lot he had brought. Sorry people the questions may keep coming, the piston in the Haynes shows 3 rings on one picture and 2 on another? Again Haynes shows 3 clutch plates (2 flat 1 shaped) and 3 linings. But I have 5 plates? Brillent advice already people. Thank You

I take it you also have the flywheel and wipac genymag, also noticed you don't seem to have the final drive oil seal arrangement. There is also a little piece missing from the division web ( flywheel side crankcase ) probably caused by a snapped chain at some time in the engines life. This is not a problem, but can cause oil and crud getting into the flywheel side of the crankcase. Will require plugging on re-assembly of the engine.

Enjoy your engine re-vamp, keep us all updated..... Nick

thanks chickensoup, yes i have just put out a plea for the two final dive seal plates, have purchased a flywheel and have eyes on a wipac ign. not sure about the "little piece missing from the division web" That will send me scrambling back to the haynes book for reference. Other wise new bearings seals gaskets clutch plates are awaiting delivery. And then the big clean an assembly can begin. Also have to decide on bore condition, with a std piston and new rings.

Chickensoup is talking about the area of the casting between the front edge of the drive sprocket and the flywheel area. This is often broken if a chain breaks. It isn't serious, but allows crud to be flung into the flywheel chamber, with the possibility of it causing damage. Here are pictures from my D3 - before and after repair . I fixed it with a small aluminium plate fixed with metal epoxy. 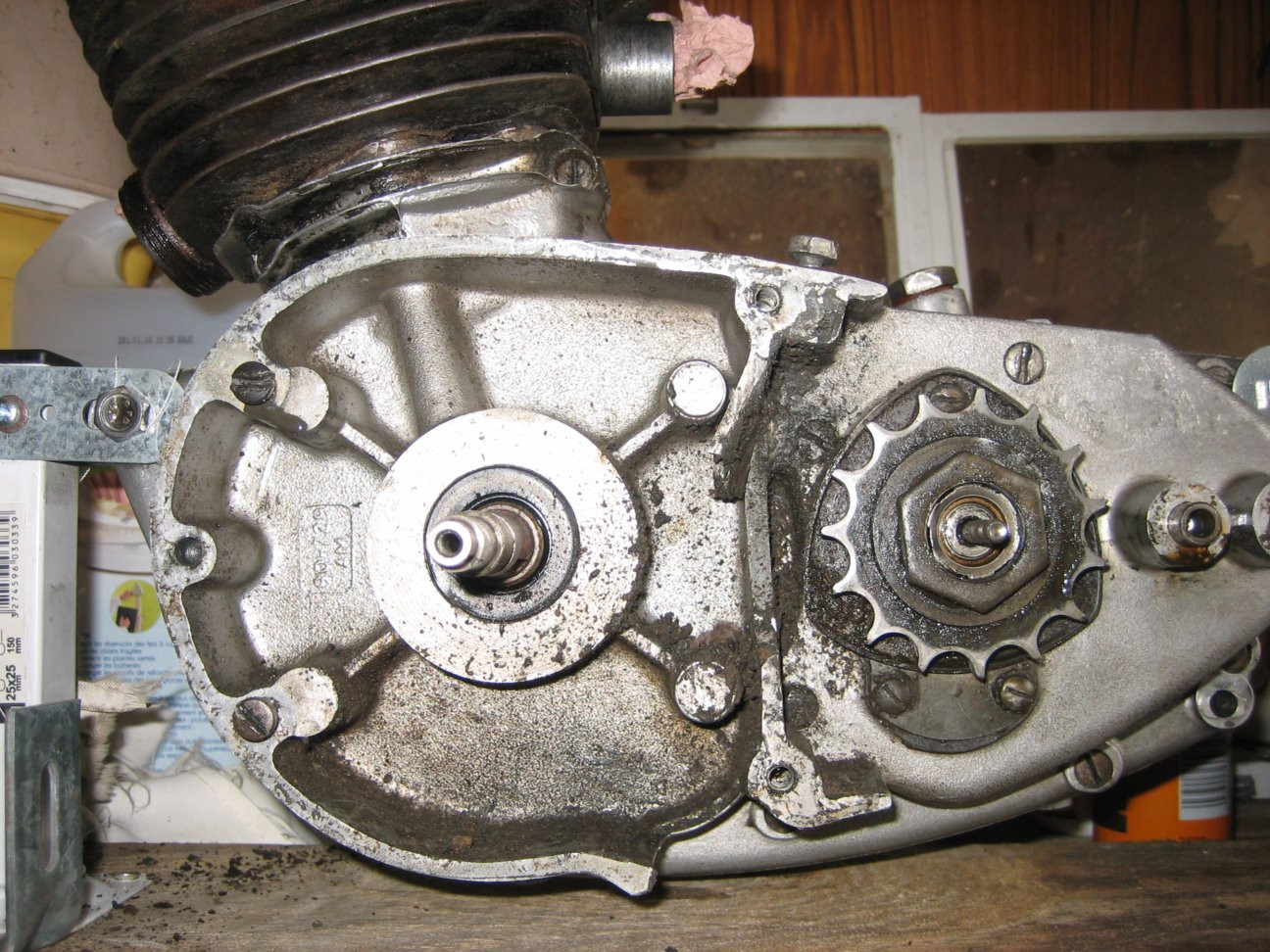 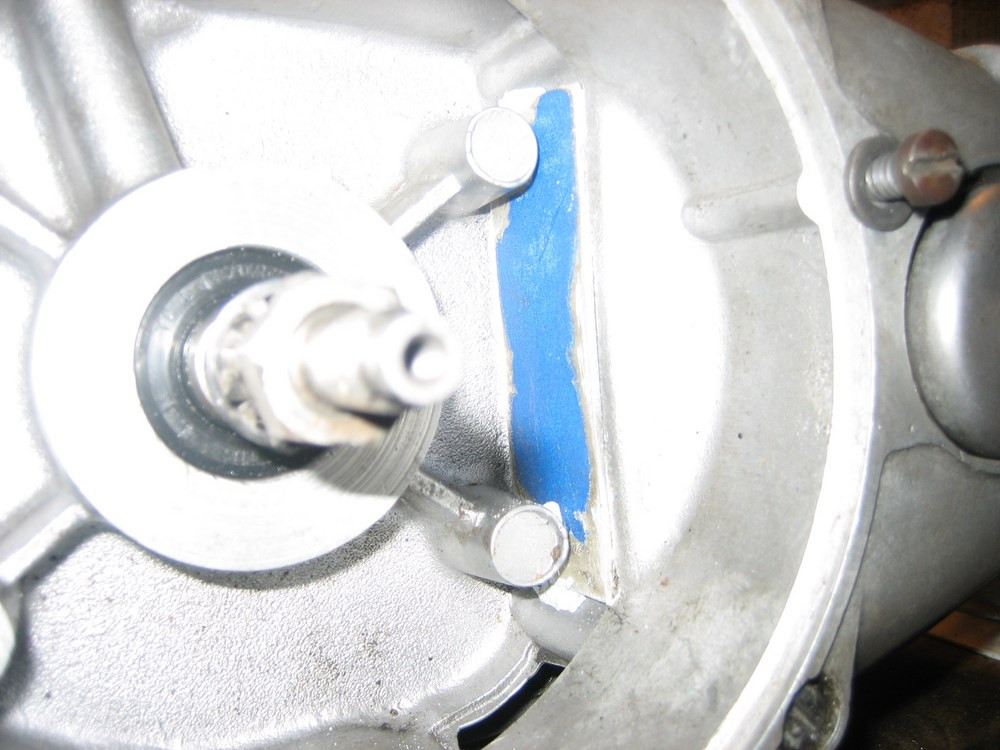 thanks 'cocorico' a picture tells a thousand stories. Yes im missing the plate/washers just outside the drive cog. AND I went running into the garage to check the casing, mine is not as bad as yours was, but the flange is damaged, looks like someone shot it. It has a hole about 20mm missing from the flange. I'll add it to my to do list. Thank you.

Sounds like an easy patch - depending on your intended use (eg, fine, dry summer days) you may not even need to repair it, it's not 'structural', though it is not difficult.

Still here, not likely to return. As you say, it's easier to ride over here, due to lack of traffic as much as anything else. Even in winter in suitable clothes.