Images of my exhaust as mentioned n the 'Wanted' thread for the straight kickstart. 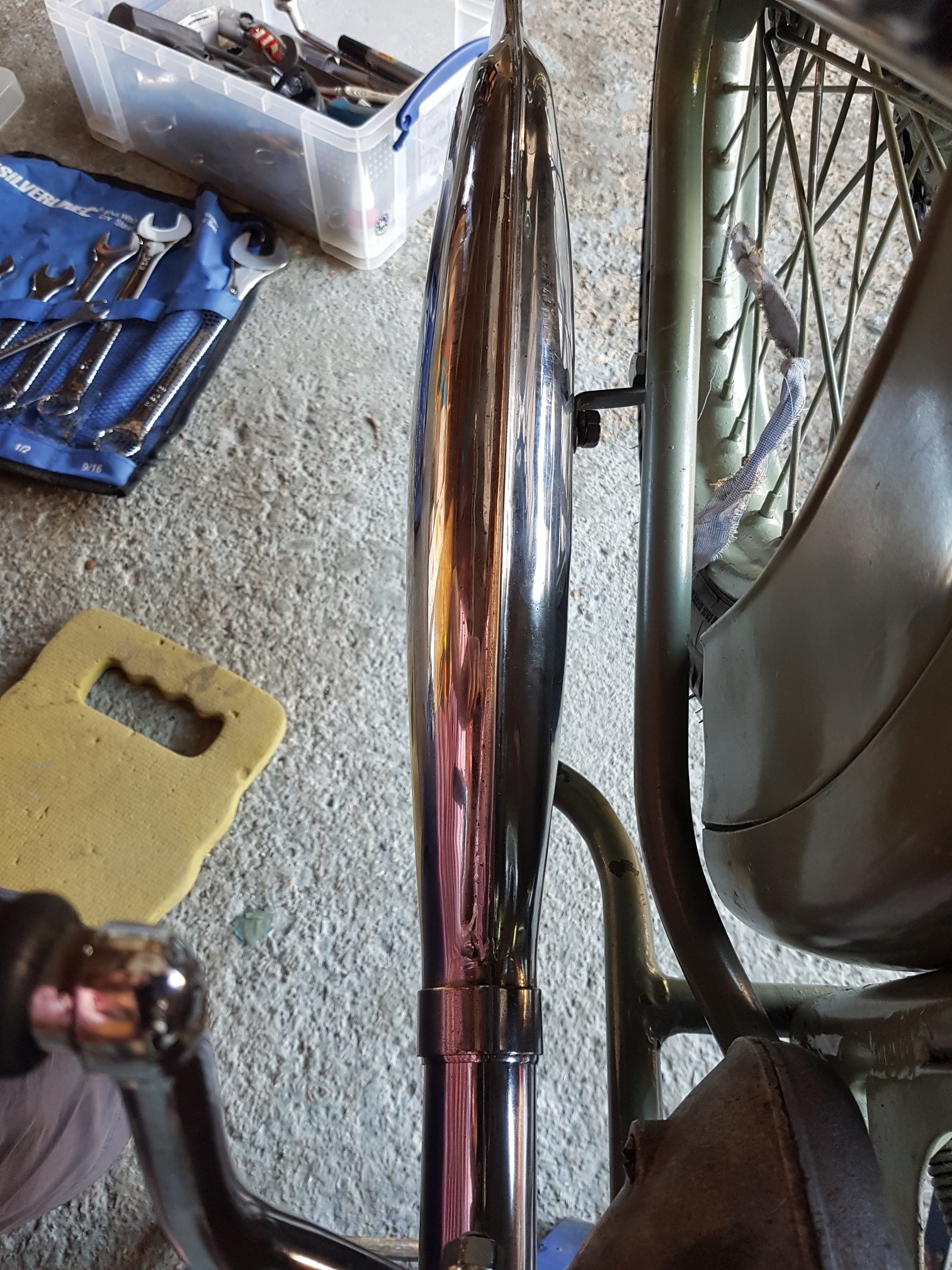 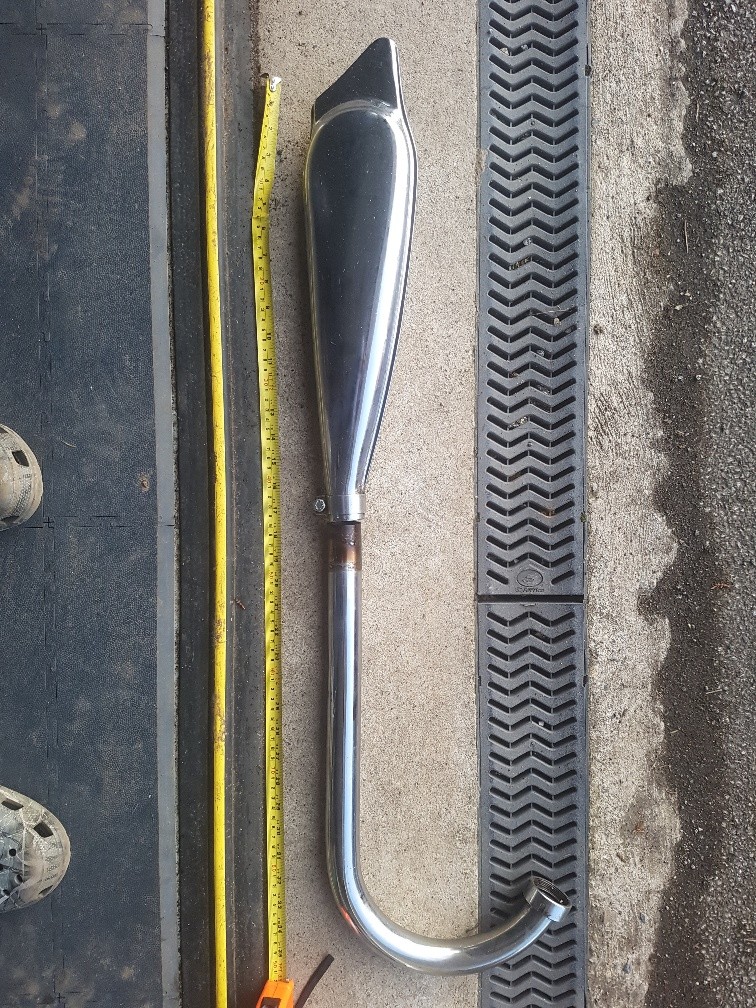 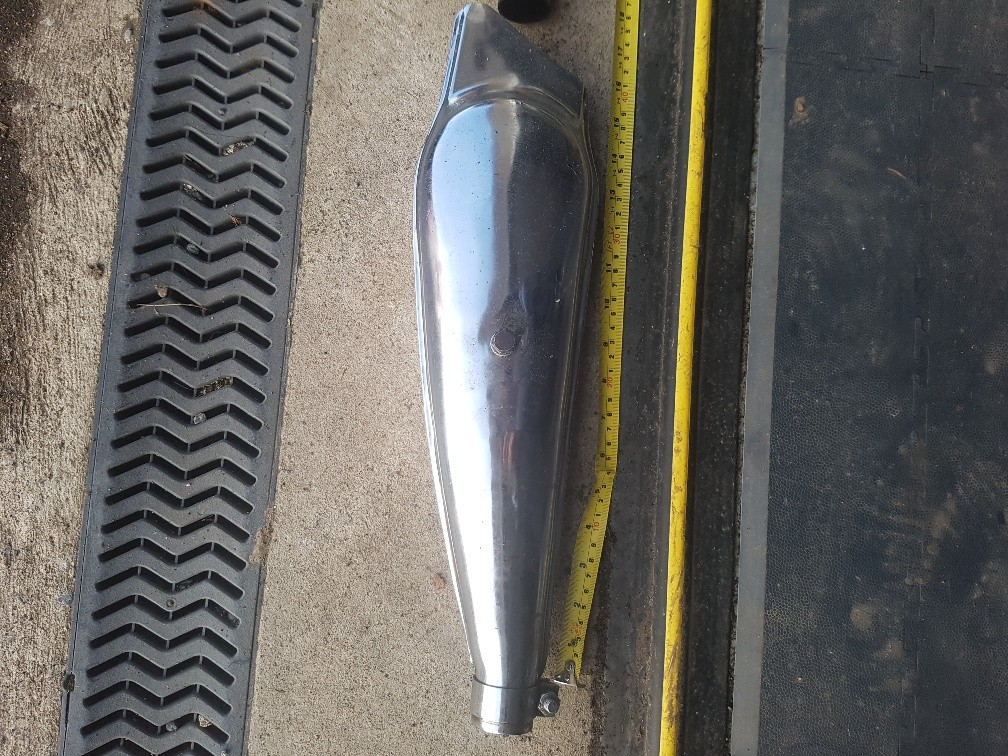 No wonder you’re struggling. It’s not even close to being fitted properly. I’ll try taking a picture of mine tomorrow if I get a chance.

Thanks. I can only think the exhaust pipe is a rogue. Im sure sometime in the past I found a record of the frame number after which exhausts went over the stand but I cant find it now. Pretty sure it was mid 1950 and my frame was after the cut off. Im a bit nervous about buying a new one in case it doesnt fit either and I'm left with it . It would be handy if someone can recommend a supplier of this type of exhaust that definitely fits.

Your silencer is on some kind of weird homemade offset bracket. It is pushing it outwards and forwards, which is in turn forcing the header pipe way out of line. The silencer should be mounted to the frame with just a stud, nut and spacer.

picture of an under foot rest pipe and over footrest pipe, in both cases the silencer to box clamp is further back in line with the mudguard / rear frame tube upright, if you bin the bolt and bracket holding your silencer to the frame, fit a stud and spacer which gets the silencer tight on the frame you should be good, there was a straight kick start on eBay earlier this week. 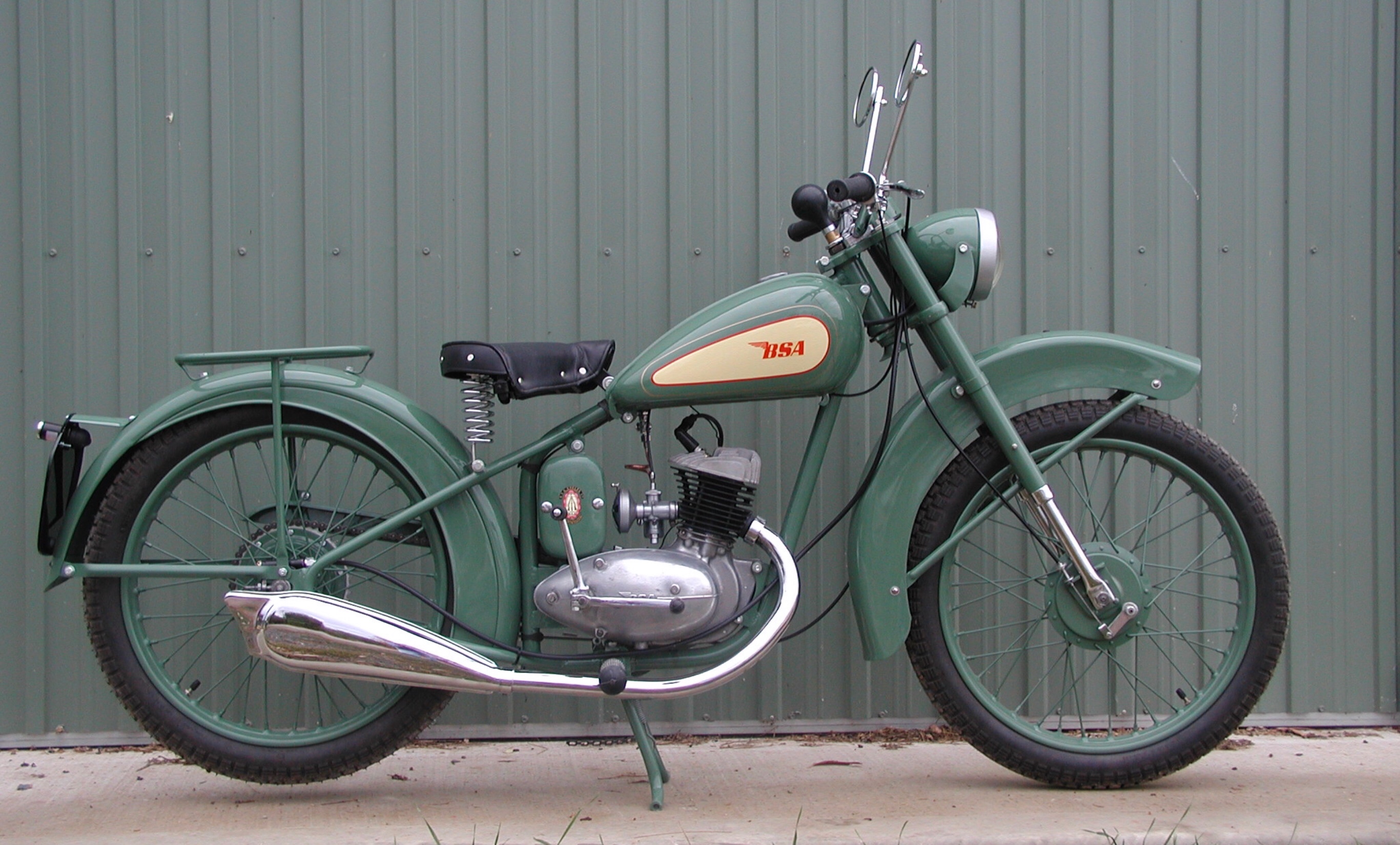 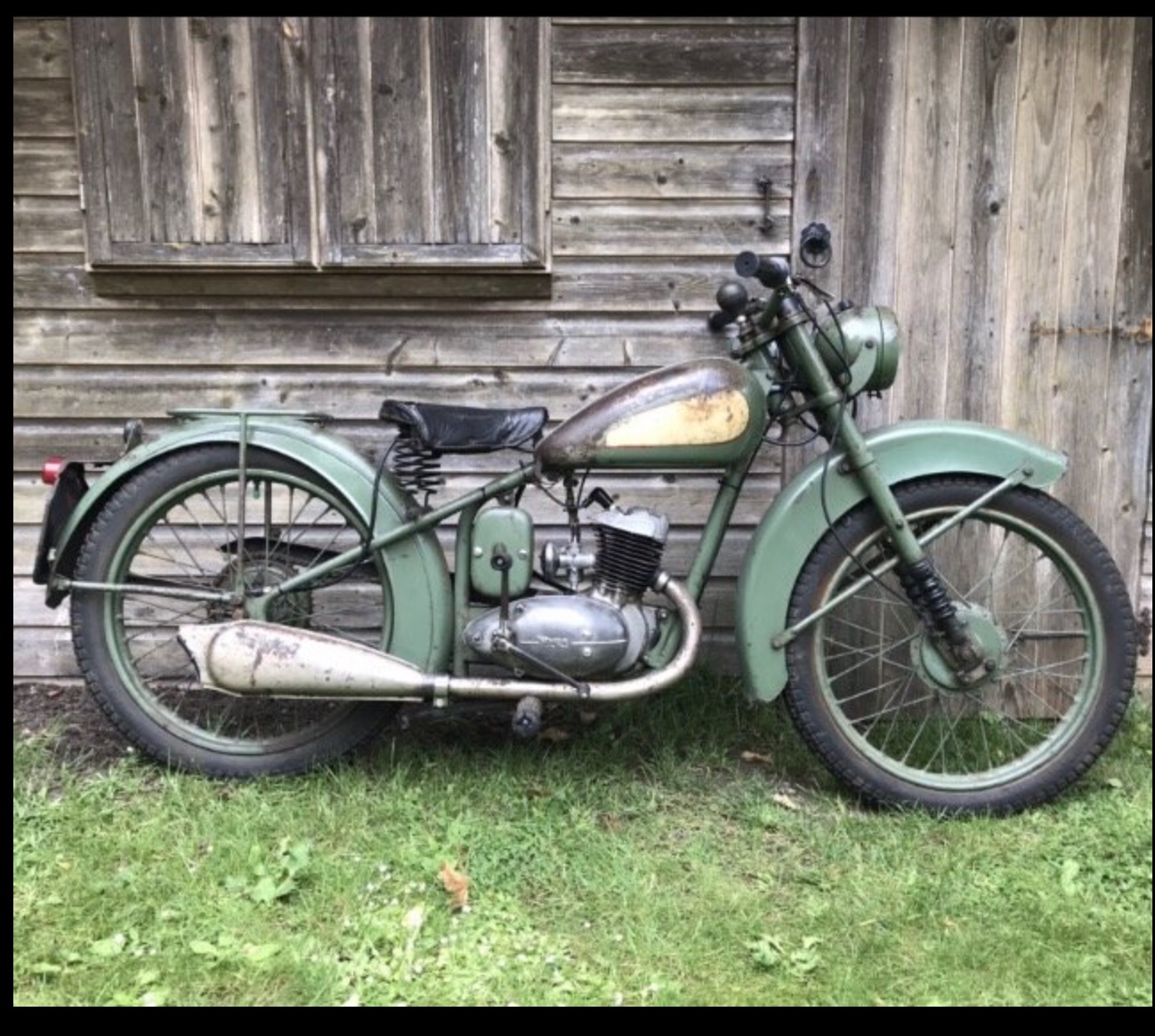 Nonsense. If that bracket was removed, and the clamp and header nut loosened, the exhaust header and silencer would rotate closer to the frame and fit properly. My guess, based on the size of the fixings, is that the bracket puts the silencer about 1” too far forward, and 5/8” too far out; it’s certainly the root of the problem.

It doesn’t actually matter which exhaust pipe you have, over or under. The engine is in the same place relative to the silencer mounting tab regardless. You can fit an early pipe to a later bike and vice-versa. The only practical difference is that the later setup needs the scallop cut out of the footrest spacer tube to be placed at the top, and the earlier needs it underneath, to allow clearance for the pipe.

I've got a horrible feeling you might have one of these new exhaust pipes that don't fit properly.

I've got a horrible feeling you might have one of these new exhaust pipes that don't fit properly.

It’s only a bit of tube. If it doesn’t go exactly where it’s supposed to, then get it as close as you can, tighten the head flange nut, and put a broom handle in the other end and pull it to where it needs to be.

These are not, and never were, super high quality machines, built to exact tolerances in modern factories. They were bottom of the range, budget lightweights, practically thrown together; often by the less enthusiastic members of the workforce. It’s why there’s such a difference between individual examples of the same model. Even on the production line there would have been a certain amount of “fitting” necessary to get things to sit right, let alone a lifetime later with pattern parts and a multitude of owners with more enthusiasm than aptitude.

Glen/Sunny, thanks for your input

I didnt realise that it was possible to use brute force like that, I had thought it might damage the cylinder or exhaust port as the exhaust doesnt seem that malleable. I cant give you an image from above so you can see where it sits on the footrest but the pipe definitely sits further out than it should I would say by at east half an inch at the footrest and this increases as you move back.

By the way I dont know if you noticed but there is a kink right at the end of the pipe. If I pull the silencer to the end of the pipe it pushes out even further so I have stuck with what the previous owner did and pushed the silencer further on past the kink. Not sure the previously mentioned method with a broom handle will cure this but maybe an garage that fits exhausts might have  tool to bend it straight?

I usually offer the pipe and nut to the cylinder in order to get a good seal, then slacken the nut enough to be able to rotate the pipe. The silencer is then fitted and final alignment made. As said, you may need to apply some 'gentle' persuasion to get a perfect fit. I think a trip to an exhaust fitter would cost more than another pipe!

BSA had a special tool called a Birmingham Screwdriver - they can be very useful, I have a genuine one in the shed.

lbayorkie said
... maybe an garage that fits exhausts might have  tool to bend it straight?

In my experience, most garages have at least one person with the necessary capacities for applying brute force in just the right way it’s required. Whether they have a broom is less of a certainty. 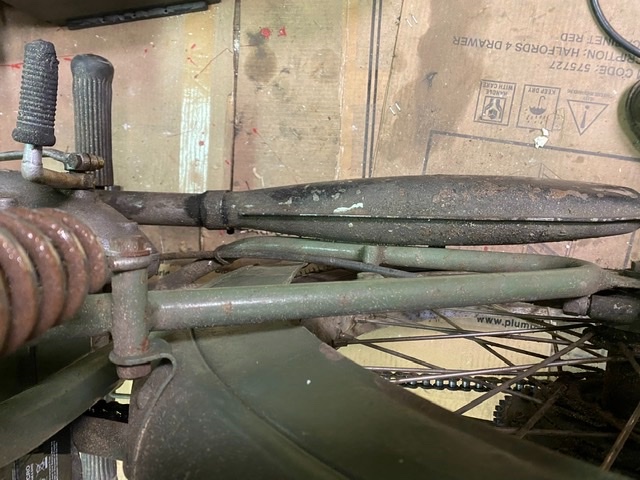 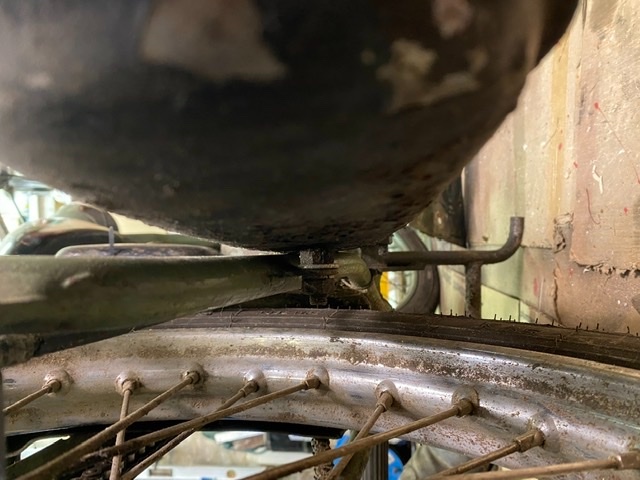 That’s a factory silencer and an aftermarket header bought sometime around 1996/7.

Thanks for the tips and images, all very helpful. The engine should be back in in the next 2 weeks so I will use the advice I have been given. Im sure I tried everything (sort of bending) before s

o thats probably the answer. I will let you know how I get on.

BSA had a special tool called a Birmingham Screwdriver - they can be very useful, I have a genuine one in the shed.

Indeed - there is a full set of these wonderful tools in the workshop. 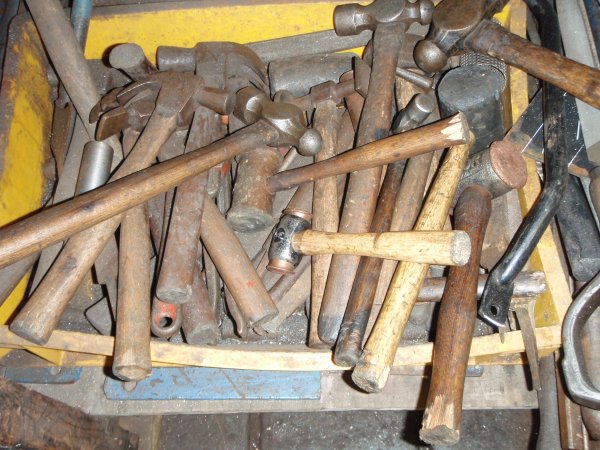 Ah, a Thor or two - one of the very best and still made by the original Birmingham company. A more extensive range than mine.

Hidi hide! It looks like the bracket was made to fit the exhaust, however if its sealed at its joints and is secure and with a cranked kick start lever clears the silencer then it maybe best left alone.

Also a small tweak at one end can mean it's much further out at the tail pipe.

Thanks,I'm going to try and make it fit properly. If I cant I will just put it back the way it is which is leak free and think about getting a new exhaust. Noone has suggested a reliable supplier of exhausts but I think there's a manufacturer in Bradford (who seem to supply Bantam exhausts to dealers) so might try them or Bournemouth Bantams.

I bought my header pipe from Armours.

I do still have the factory original one, but it’s very rusty.