Why have I only just stumbled across this photo. 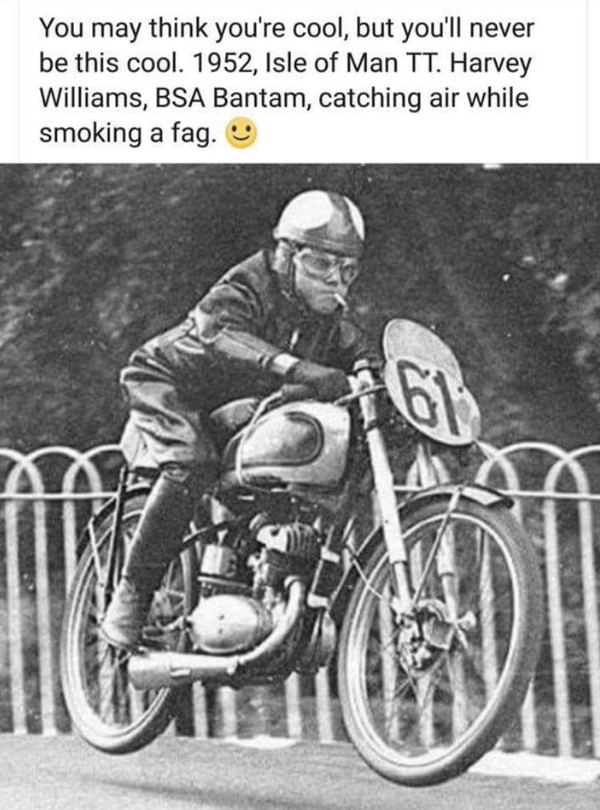 Great picture, someone once said that an ashtray on a motorbike was useless, he disproves that, would be useful for him.

From memory he came in about eleventh. Think what he could have done if he wasn't constantly stopping to light his ciggy!

I've just checked on the results;  Harvey Williams finished 7th on his Bantam - and the six bikes in front of him were:

To my way of thinking, all the bikes which finished ahead of Harvey were pukka racers, as compared to this privateer 19 year old on his hotted up commuter bike!  What a man . . .

Cromie McCandless was the brother of Rex McCandless, who designed and built the prototype of the frame which Norton developed (a bit) and called 'their' Featherbed - and for which they gave McCandless virtually NO recognition!

There is a tee shirt available, waiting for mine... 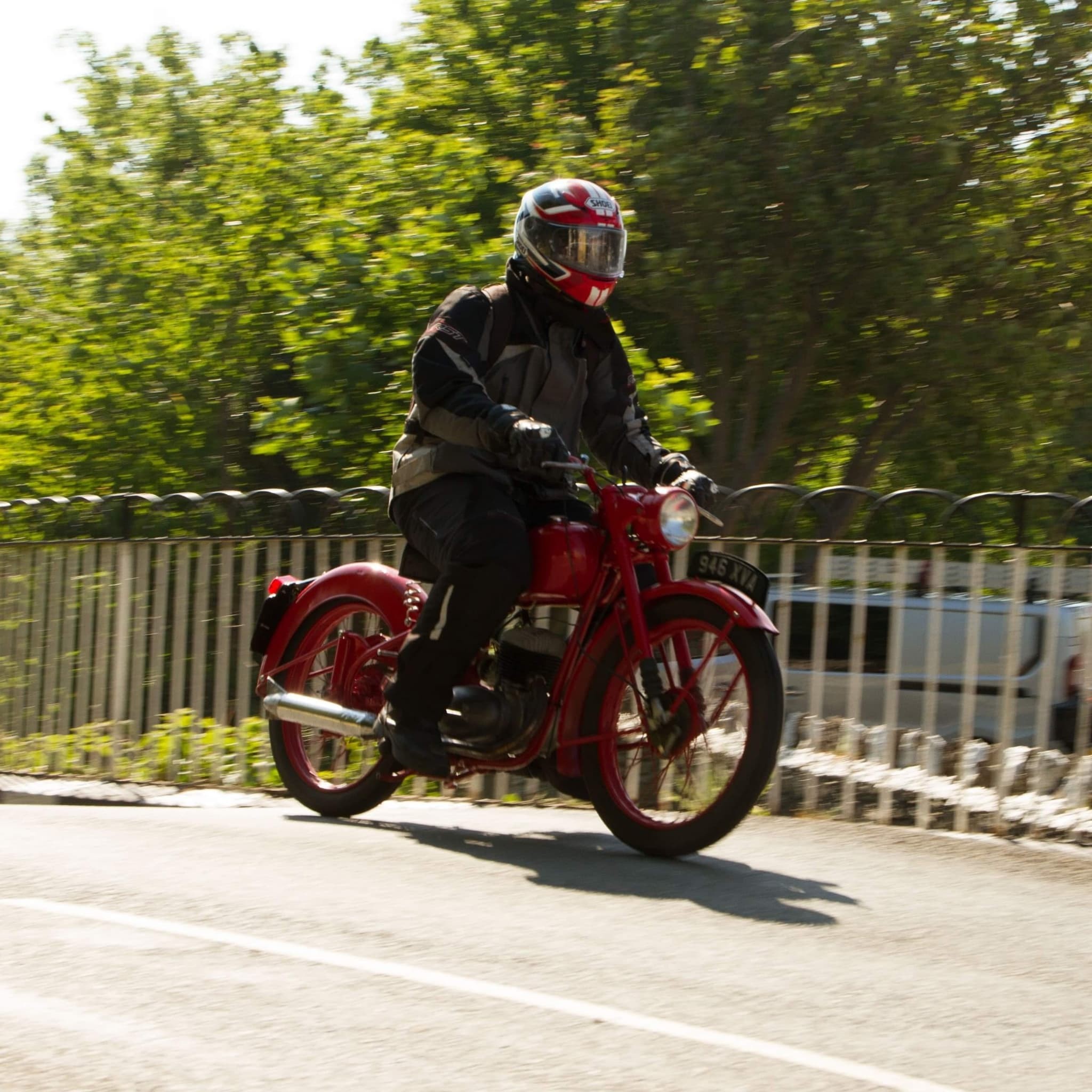 I did my best, but didn't get into the air!

Well done Bill, did you get round the full circuit?

** Please log in to view ** is the tee shirt I mentioned, good quality too.

Brings back memories. I used to catch some air on the snakeback flick over Blackford Bridge in Sale on my way to Uni in Manchester on my B175 long time ago. I usually lit my first fag of the morning at the Washway Road lights before turning right to accelerate to hit the snakeback in a screaming third gear.  So.... not sure if I ever flicked over that ridge with a Benson and Hedges on but its likely.....I certainly know the feeling. I do recall following my mate's wife and her hot bikerchik friend on her A10 over that snakeback and the whole thing was definately airbourne as she flicked it over. Very impressive riding but a bit alarming for the girl on the pillion who jumped off at the M56 underpass lights and jumped on the back of my B175, shouting something about a crazy b*#ch !!.  Happy days.

Lots of bikers used to light up at the lights in those days....needed a good Zippo lighter to deal with the wind and if you were skilled you could do it all with one hand whilst tootling along. We used to dip the Zippos in our petrol tanks on a string. Nice smell with all that 2 stroke oil.

Harley Davidson lifestyle official accessories used to market a cigar (spliff !!) holder in the USA. It was like a tube that enabled you to light and smoke a stogie whilst tearing up the highway. I have never seen one in use in USA or anywhere else....has anybody out there ever used one ? The young man on the D1 racer would have appreciated one I am sure.

I gave up smoking 25 years ago but I still have the Zippo lighter.

Which reminds me of .. 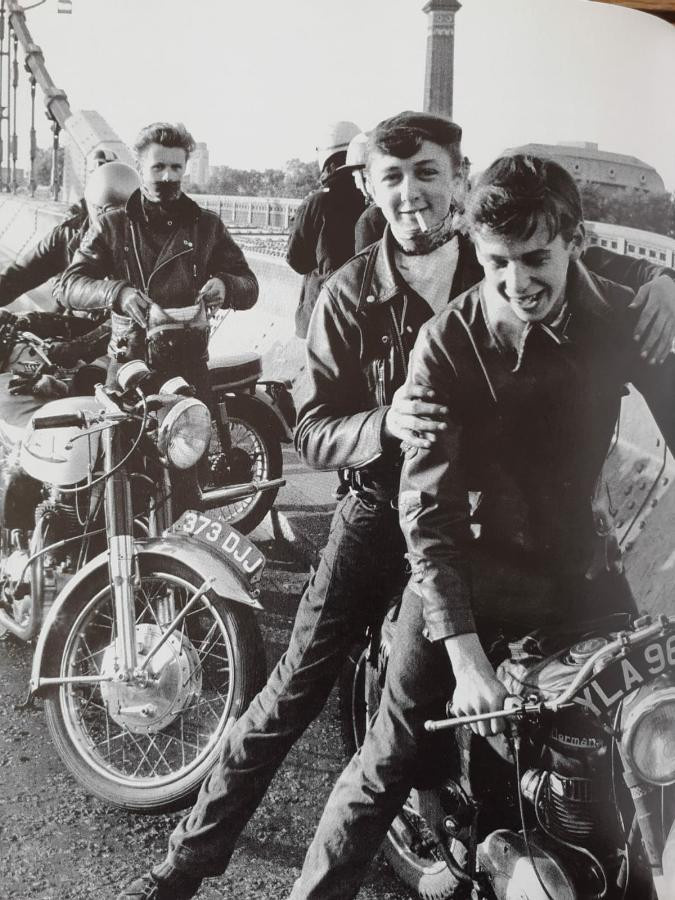 While riding pillion on a mates b31 i made the mistake of smoking a filter tipped fag a great mistake . The hot burning end dropped off the tip and went down inside my shirt . By the time i got him to stop i had a row of burn holes in my vest like i had been machine gunned . Needless to say i have never smoked on a mobile bike since .

Number6 said
Which reminds me of ..

Looks like the North West Bantam Owners on a ride out to Rivington Pike !!

Hi Sponge like you I kicked the habit about 25 years ago and yes I have still got the zippo, they will burn anything petrol, paraffin, paint thinners  TVO etc.

FrankG said
Hi Sponge like you I kicked the habit about 25 years ago and yes I have still got the zippo, they will burn anything petrol, paraffin, paint thinners  TVO etc.

Absolutely. A fantastic and timeless bit of kit that you don't see much of anymore. My father had one with a Guardsman on it. Do you remember Guards cigarettes ? I think they gave you a free lighter if you smoked a million fags !! Benson and Hedges never gave me anything except a cough, a headache and lots of little holes in the front of my leather jacket.  Happy days.

I did my best, but didn't get into the air!

It is almost airbourne....look at that rear tyre......a really great photograph.

Dunno why but just reminded me of this 🤣🤣